Benefitting from multi-user gain brought by multi-antenna techniques, space division multiple access (SDMA) is capable of significantly enhancing spatial throughput (ST) in wireless networks. Nevertheless, we show in this letter that, even when SDMA is applied, ST would diminish to be zero in ultra-dense networks (UDN), where small cell base stations (BSs) are fully densified. More importantly, we compare the performance of SDMA, single-user beamforming (SU-BF) (one user is served in each cell) and full SDMA (the number of served users equals the number of equipped antennas). Surprisingly, it is shown that SU-BF achieves the highest ST and critical density, beyond which ST starts to degrade, in UDN. The results in this work could shed light on the fundamental limitation of SDMA in UDN. 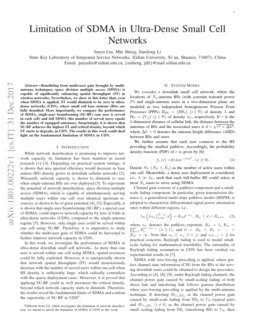 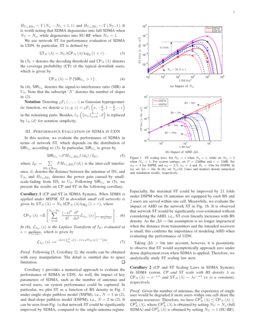 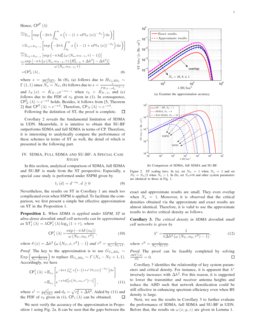 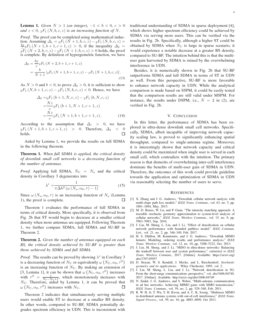 While network densification is promising to improve network capacity, its limitation has been manifest in recent research [1, 2, 3]. Depending on practical system settings, it is shown that area spectral efficiency would decrease as base station (BS) density grows in downlink cellular networks [2]. Worsestill, network capacity is shown to diminish to zero when single-antenna BSs are over deployed [3]. To rejuvenate the potential of network densification, space division multiple access (SDMA), which is capable of simultaneously serving multiple users within one cell over identical spectrum resources, is shown to be of great potential [4, 5]. Especially, it is shown that single-user beamforming (SU-BF), a special case of SDMA, could improve network capacity by tens of folds in ultra-dense networks (UDN), compared to the single-antenna regime [5]. However, only single user could be served within one cell using SU-BF. Therefore, it is imperative to study whether the multi-user gain of SDMA could be harvested to further improve network capacity in UDN.

In this work, we investigate the performance of SDMA in ultra-dense downlink small cell networks. As more than one user is served within one cell using SDMA, spatial resources could be fully exploited. However, it is unexpectedly shown that network spatial throughput (ST) would monotonously decrease with the number of served users within one cell when BS density is sufficiently large, which radically contradicts with the sparse deployment cases. Moreover, it is proved that applying SU-BF could as well maximize the critical density, beyond which network capacity starts to diminish. Therefore, the results reveal the fundamental limits of SDMA and confirm the superiority of SU-BF in UDN111Different from [3], which investigates the limitation of network densification, we intend to unveil the limitation of SDMA in UDN in this work..

We consider a downlink small cell network, where the locations of Na-antenna BSs (with constant transmit power P) and single-antenna users in a two-dimension plane are modeled as two independent homogeneous Poisson Point Processes (PPPs) ΠBS={BSi} (i∈N) of density λ and ΠU={Uj} (j∈N) of density λU, respectively. If r is the 2-dimension distance of cellular link, the distance between the antennas of BSs and the associated users is d=√r2+Δh2, where Δh>0 denotes the antenna height difference (AHD) between BSs and users

We further assume that each user connects to the BS providing the smallest pathloss. Accordingly, the probability density function (PDF) of

Denote NU (NU≤Na) as the number of active users within one cell. Meanwhile, a dense user deployment is considered, i.e., λ≫λU, such that each full-buffer BS could select at most Na users to serve using SDMA.

where αn denotes the pathloss exponent, K0=1, Kn=∏ni=1Rαi−αi−1i (n≥1), and 0=R0<R1<⋯<RN=∞. Note that αi≤αj (i<j) and αN−1>2 for practical concerns. Rayleigh fading is used to model small-scale fading for mathematical tractability. The rationality of Rayleigh fading assumption in UDN has been verified via experimental results in [7].

SDMA with zero-forcing precoding is applied, where perfect channel state information (CSI) from the BSs to the serving downlink users could be obtained to design the precoders. According to [4, 8, 9]

, under Rayleigh fading channels, the channel power gain caused by small-scaling fading of both direct link and interfering link follows gamma distribution when zero-forcing precoding is applied by the multi-antenna technique. If denoting

We use network ST for performance evaluation of SDMA in UDN. In particular, ST is defined by

In (3), τ denotes the decoding threshold and CPN(λ) denotes the coverage probability (CP) of the typical downlink users, which is given by

In (4), SIRU0 denotes the signal-to-interference ratio (SIR) at U0. Note that the subscript ‘N’ denotes the number of slopes in (2).

In this section, we evaluate the performance of SDMA in terms of network ST, which depends on the distribution of SIRU0 according to (3). In particular, SIRU0 is given by

where IIC=∑BSi∈~ΠBSPHU0,BSil(di) is the inter-cell interference, di denotes the distance between the antennas of BSi and U0, and HU0,BSi denotes the power gain caused by small-scale-fading from BSi to U0. Following SIRU0 in (5), we present the results on CP and ST in the following corollary.

When SDMA is applied under MSPM, ST in downlink small cell networks is given by STN(λ)=NUλCPN(λ)log2(1+τ), where

In (6), LIIC(s) is the Laplace Transform of IIC evaluated at s=τPlN(d0), which is given by

Following [5, Corollary 2], the results can be obtained with easy manipulation. The detail is omitted due to space limitation.∎

Corollary 1 provides a numerical approach to evaluate the performance of SDMA in UDN. As well, the impact of key parameters of SDMA, such as the number of antennas and served users, on system performance could be captured. In particular, we plot ST as a function of BS density in Fig. 1 under single-slope pathloss model (SSPM), i.e., N=1 in (2), and dual-slope pathloss model (DSPM), i.e., N=2 in (2). It can be seen from Fig. (a)a that network ST could be significantly improved by SDMA, compared to the single-antenna regime. Especially, the maximal ST could be improved by 21 folds under DSPM when 16 antennas are equipped by each BS and 2 users are served within one cell. Meanwhile, we evaluate the impact of AHD on the network ST in Fig. (b)b

. It is observed that network ST would be significantly over-estimated without considering the AHD, i.e., ST even linearly increases with BS density. As the

Δh=0m assumption is no longer impractical when the distance from transmitters and the intended receivers is small, this confirms the importance of modeling AHD when evaluating the performance of UDN.

Taking Δh>0m into account, however, it is pessimistic to observe that ST would asymptotically approach zero under dense deployment even when SDMA is applied. Therefore, we analytically study ST scaling law next.

In SDMA system, CP and ST scale with BS density λ as CPN(λ)∼e−κλ and STN(λ)∼λe−κλ (κ is a constant), respectively.

Following the definition of ST, the proof is complete.∎

Corollary 2 reveals the fundamental limitation of SDMA in UDN. Meanwhile, it is intuitive to obtain that SU-BF outperforms SDMA and full SDMA in terms of CP. Therefore, it is interesting to analytically compare the performance of these schemes in terms of ST as well, the detail of which is presented in the following part.

In this section, analytical comparison of SDMA, full SDMA and SU-BF is made from the ST perspective. Especially, a special case study is performed under SSPM given by

Nevertheless, the results on ST in Corollary 1 are much too complicated even when SSPM is applied. To facilitate the comparison, we first present a simple but effective approximation on ST in the Proposition 1.

When SDMA is applied under SSPM, ST in ultra-dense downlink small cell networks can be approximated as ST†1(λ)=λCP†1(λ)log2(1+τ), where

The key to the approximation is to use GU0,BS0∼Exp(1Na−NU+1) to replace . Accordingly, we have

The proof can be feasibly completed by solving ∂ST†1(λ)∂λ=0.∎

Corollary 3 identifies the relationship of key system parameters and critical density. For instance, it is apparent that λ∗ inversely increases with Δh2. For this reason, it is suggested to lower the transmitter and receiver antenna heights and reduce the AHD such that network densification could be still effective in enhancing spectrum efficiency even when BS density is large.

Next, we use the results in Corollary 3 to further evaluate the performance of SDMA, full SDMA and SU-BF in UDN. Before that, the results on ω(x,y,z) are given in Lemma 1.

The proof can be completed using mathematical induction. Assuming , if the inequality Δ2=2F1(N+2,b,c,z)−2F1(N+1,b,c,z)>0 holds, the proof is complete. By definition of hypergemetric function, we have

Aided by Lemma 1, we provide the results on full SDMA in the following theorem.

When full SDMA is applied, the critical density of downlink small cell networks is a decreasing function of the number of antennas.

Applying full SDMA, NU=Na and the critical density in Corollary 3 degenerates into

Since ω(Na,α0,τ) is an increasing function of Na (Lemma 1), the proof is complete.∎

Theorem 1 evaluates the performance of full SDMA in terms of critical density. More specifically, it is observed from Fig. (b)b that ST would begin to decrease at a smaller critical density when more antennas are equipped. Following Theorem 1, we further compare SDMA, full SDMA and SU-BF in Theorem 2.

Given the number of antennas equipped on each BS, the critical density achieved by SU-BF is greater than those achieved by SDMA and full SDMA.

Theorem 2 indicates that simultaneously serving multiple users would enable ST to decrease at a smaller BS density. In other words, compared to SU-BF, SDMA potentially degrades spectrum efficiency in UDN. This is inconsistent with traditional understanding of SDMA in sparse deployment [4], which shows higher spectrum efficiency could be achieved by SDMA via serving more users. This can be verified via the results in Fig. (b)b. Specifically, although a higher ST could be obtained by SDMA when NU is large in sparse scenario, it would experience a notable decrease at a greater BS density, compared to SU-BF. The intuition behind this is that the multi-user gain harvested by SDMA is ruined by the overwhelming interference in UDN.

Besides, it is numerically shown in Fig. (b)b that SU-BF outperforms SDMA and full SDMA in terms of ST in UDN as well. From this perspective, SU-BF is more favorable to enhance network capacity in UDN. While the analytical comparison is made based on SSPM, it could be easily tested that the comparison results are still valid under MSPM. For instance, the results under DSPM, i.e., N=2 in (2), are verified in Fig. (b)b.

In this letter, the performance of SDMA has been explored in ultra-dense downlink small cell networks. Specifically, SDMA, albeit incapable of improving network capacity scaling law, is proved to significantly enhancing spatial throughput, compared to single-antenna regime. Moreover, it is interestingly shown that network capacity and critical density could be maximized when single user is served in each small cell, which contradicts with the intuition. The primary reason is that demerits of overwhelming inter-cell interference dominate the benefits of multi-user gain of SDMA in UDN. Therefore, the outcomes of this work could provide guideline towards the application and optimization of SDMA in UDN via reasonably selecting the number of users to serve.