This article investigates general scaling settings and limit distributions of functionals of filtered random fields. The filters are defined by the convolution of non-random kernels with functions of Gaussian random fields. The case of long-range dependent fields and increasing observation windows is studied. The obtained limit random processes are non-Gaussian. Most known results on this topic give asymptotic processes that always exhibit non-negative auto-correlation structures and have the self-similar parameter H∈(1/2,1). In this work we also obtain convergence for the case H∈(0,1/2) and show how the Hurst parameter H can depend on the shape of the observation windows. Various examples are presented. 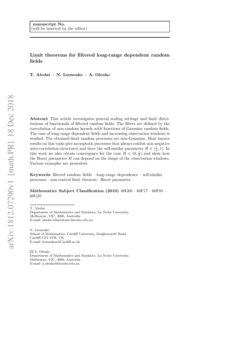 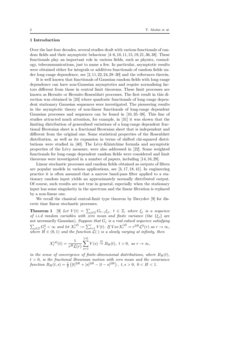 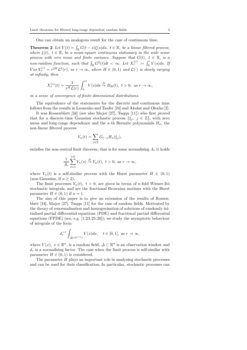 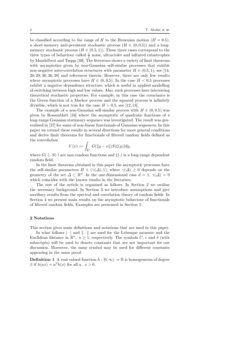 Non-central limit theorems for functionals of random fields on hypersurfaces

In this note we deal with the detection of oil spills in open sea via se...
Agustín Mailing, et al. ∙

It is well known that functionals of Gaussian random fields with long-range dependence can have non-Gaussian asymptotics and require normalising factors different from those in central limit theorems. These limit processes are known as Hermite or Hermite-Rosenblatt processes. The first result in this direction was obtained in

rosenblatt1961independence where quadratic functionals of long-range dependent stationary Gaussian sequences were investigated. The pioneering results in the asymptotic theory of non-linear functionals of long-range dependent Gaussian processes and sequences can be found in taqqu1979convergence , taqqu1975weak , dobrushin1979non , rosenblatt1981limit , taqqu1978representation . This line of studies attracted much attention, for example, in pakkanen2016functional

veillette2013 . The Lévy-Khintchine formula and asymptotic properties of the Lévy measure, were also addressed in leonenko2017rosenblatt . Some weighted functionals for long-range dependent random fields were considered and limit theorems were investigated in a number of papers, including olenko2013limit , ivanov2013limit , ivanov1989statistical .

. In engineering practice it is often assumed that a narrow band-pass filter applied to a stationary random input yields an approximately normally distributed output. Of course, such results are not true in general, especially when the stationary input has some singularity in the spectrum and the linear filtration is replaced by a non-linear one.

is a sequence of i.i.d random variables with zero mean and finite variance

One can obtain an analogous result for the case of continuous time.

in a sense of convergence of finite-dimensional distributions.

satisfies the non-central limit theorem, that is for some normalising Ar it holds

The limit processes Yκ(t), t>0, are given in terms of κ-fold Wiener-Itô stochastic integrals, and are the fractional Brownian motions with the Hurst parameter H∈(0,1) if κ=1.

where V(x), x∈Rn, is a random field, Δ⊂Rn is an observation window and dr is a normalising factor. The case when the limit process is self-similar with parameter H∈(0,1) is considered.

H to the Brownian motion (H=0.5), a short-memory anti-persistent stochastic process (H∈(0,0.5)) and a long-memory stochastic process (H∈(0.5,1)). These three cases correspond to the three types of behaviour called 1f noise, ultraviolet and infrared catastrophes by Mandelbrot and Taqqu taqqu1981self . The literature shows a variety of limit theorems with asymptotics given by non-Gaussian self-similar processes that exhibit non-negative auto-correlation structures with parameter H∈(0.5,1), see taqqu1975weak , taqqu1979convergence , ivanov1989statistical , leonenko1999limit , olenko2013limit , olenko2010limit and references therein. However, there are only few results where asymptotic processes have H∈(0,0.5). In the case H<0.5 processes exhibit a negative dependence structure, which is useful in applied modelling of switching between high and low values. Also, such processes have interesting theoretical stochastic properties. For example, in this case the covariance is the Green function of a Markov process and the squared process is infinitely divisible, which is not true for the case H>0.5, seeeisenbaum2005squared , eisenbaum2006characterization .

The example of a non-Gaussian self-similar process with H∈(0,0.5) was given by Rossenblatt Rosenblatt1979 where the asymptotic of quadratic functions of a long-range Gaussian stationary sequence was investigated. The result was generalised in major1981limit for sums of non-linear functionals of Gaussian sequences. In this paper we extend these results in several directions for more general conditions and derive limit theorems for functionals of filtered random fields defined as the convolution

where G(⋅), S(⋅) are non-random functions and ξ(⋅) is a long-range dependent random field.

In the limit theorems obtained in this paper the asymptotic processes have the self-similar parameters H∈(γ(Δ),1), where γ(Δ)≥0 depends on the geometry of the set Δ⊂Rn. In the one-dimensional case d=1, γ(Δ)=0 which coincides with the known results in the literature.

The rest of the article is organised as follows. In Section 2 we outline the necessary background. In Section 3 we introduce assumptions and give auxiliary results from the spectral and correlation theory of random fields. In Section 4 we present main results on the asymptotic behaviour of functionals of filtered random fields. Examples are presented in Section 5.

This section gives main definitions and notations that are used in this paper.

In what follows |⋅| and ∥⋅∥ are used for the Lebesque measure and the Euclidean distance in Rn, n≥1, respectively. The symbols C, ϵ and δ (with subscripts) will be used to denote constants that are not important for our discussion. Moreover, the same symbol may be used for different constants appearing in the same proof.

By the representation theorem [bingham1987regular, , Theorem 1.3.1], there exists C>0 such that for all r≥C the function L(⋅) can be written in the form

The Hermite polynomials Hm(x), m≥0, are given by

The first few Hermite polynomials are

is the probability density function of the standard normal distribution.

It is assumed that all random variables are defined on a fixed probability space (Ω,F,P). We consider a measurable mean-square continuous zero-mean homogeneous isotropic real-valued random field ξ(x), x∈Rn, with the covariance function

It is well known that there exists a bounded non-decreasing function Φ(u), u≥0, (see ivanov1989statistical , yadrenko1983spectral ) such that

then the function f(⋅) is called the isotropic spectral density of the field ξ(x).

is the complex Gaussian white noise random measure on

where δm2m1 is the Kronecker delta function.

This section introduces assumptions and results from the spectral and correlation theory of random fields.

Let ξ(x), x∈Rn, be a homogeneous isotropic Gaussian random field with Eξ(x)=0 and the covariance function B(x), such that B(0)=1 and

where L0(∥⋅∥) is a function slowly varying at infinity.

If α∈(0,n), then the covariance function B(x) satisfying Assumption 1 is not integrable, which corresponds to the long-range dependence caseanh2015rate .

The notation Δ⊂Rn will be used to denote a Jordan-measurable compact bounded set, such that |Δ|>0, and Δ contains the origin in its interior. Let Δ(r), r>0, be the homothetic image of the set Δ, with the centre of homothety at the origin and the coefficient r>0, that is |Δ(r)|=rn|Δ| and Δ=Δ(1).

leonenko2014sojourn Suppose that ξ(x), x∈Rn, satisfies Assumption 1 and HrankS(⋅)=κ≥1. If a limit distribution exists for at least one of the random variables

By Theorem 3.1 it is enough to study Kr,κ to get asymptotic distributions of Kκ. Therefore, we restrict our attention only to Kr,κ.

The random field ξ(x), x∈Rn, has the isotropic spectral density

One can find more details on relations between Assumptions 1 and 2 in anh2017rate , anh2015rate .

leonenko2014sojourn Let ξ(x), x∈Rn, be a homogeneous isotropic Gaussian random field. If Assumptions 1 and 2 hold, then for r→∞ the random variables

denotes the multiple Wiener-Itô integral with respect to a Gaussian white noise measure, where the diagonal hyperplanes

Under these assumptions the following result was obtained.

ivanov1989statistical If Assumption 3 holds, then the finite-dimensional distributions of the random processes

converge weakly to finite-dimensional distributions of the processes

This section derives the generalisation of Theorem 3.3 when the integrand ϑ(⋅)Hκ(⋅) in (4) is replaced by a filtered random field.

Let h:[0,∞)→R be a measurable real-valued homogeneous function of degree β and g:[0,∞)→R be a bounded uniformly continuous function such that g(0)≠0 in some neighberhood of zero and ∫Rnh2(∥u∥)g2(∥u∥)du<∞.

We define the filtered random field V(x), x∈Rn, as

Note, that from the isonormal spectral representation (2) and the Itô formula

where ^G(⋅) is the Fourier transform of the function G(⋅) that is defined by (6) and the stochastic Fubini’s theorem [peccati2011wiener, , Theorem 5.13.1] was used to interchange the order of integration.

Therefore, it follows that the covariance of V(x) is

. Then, by applying the recursive estimation routine we get

The following integral is finite