Variance reduction has been commonly used in stochastic optimization. It relies crucially on the assumption that the data set is finite. However, when the data are imputed with random noise as in data augmentation, the perturbed data set be- comes essentially infinite. Recently, the stochastic MISO (S-MISO) algorithm is introduced to address this expected risk minimization problem. Though it converges faster than SGD, a significant amount of memory is required. In this pa- per, we propose two SGD-like algorithms for expected risk minimization with random perturbation, namely, stochastic sample average gradient (SSAG) and stochastic SAGA (S-SAGA). The memory cost of SSAG does not depend on the sample size, while that of S-SAGA is the same as those of variance reduction methods on un- perturbed data. Theoretical analysis and experimental results on logistic regression and AUC maximization show that SSAG has faster convergence rate than SGD with comparable space requirement, while S-SAGA outperforms S-MISO in terms of both iteration complexity and storage. 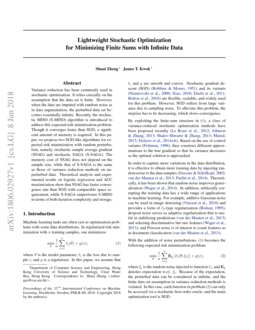 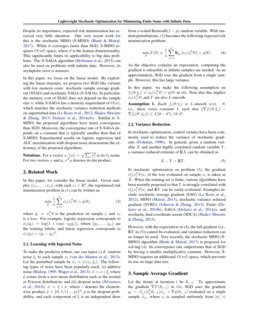 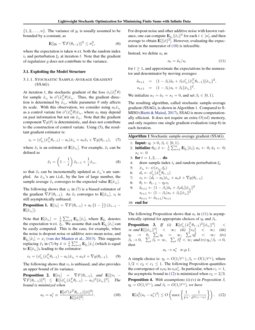 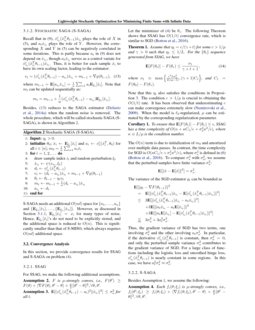 Machine learning tasks are often cast as optimization problems with some data distributions. In regularized risk minimization with n training samples, one minimizes:

where θ is the model parameter, ℓi is the loss due to sample i, and g is a regularizer. In this paper, we assume that ℓi and g

(Robbins & Monro, 1951) and its variants (Nemirovski et al., 2009; Xiao, 2010; Duchi et al., 2011; Bottou et al., 2016) are flexible, scalable, and widely used for this problem. However, SGD suffers from large variance due to sampling noise. To alleviate this problem, the stepsize has to be decreasing, which slows convergence.

By exploiting the finite-sum structure in (1), a class of variance-reduced stochastic optimization methods have been proposed recently (Le Roux et al., 2012; Johnson & Zhang, 2013; Shalev-Shwartz & Zhang, 2013; Mairal, 2013; Defazio et al., 2014a, b). Based on the use of control variates (Fishman, 1996), they construct different approximations to the true gradient so that its variance decreases as the optimal solution is approached.

With the addition of noise perturbations, (1) becomes the following expected risk minimization problem:

where ξi is the random noise injected to function ℓi, and Eξ denotes expectation w.r.t. ξi. Because of the expectation, the perturbed data can be considered as infinite, and the finite data set assumption in variance reduction methods is violated. In this case, each function in problem (2) can only be accessed via a stochastic first-order oracle, and the main optimization tool is SGD.

Despite its importance, expected risk minimization has received very little attention. One very recent work for this is the stochastic MISO (S-MISO) (Bietti & Mairal, 2017). While it converges faster than SGD, S-MISO requires O(nd) space, where d is the feature dimensionality. This significantly limits its applicability to big data problems. The N-SAGA algorithm (Hofmann et al., 2015) can also be used on problems with infinite data. However, its asymptotic error is nonzero.

In this paper, we focus on the linear model. By exploiting the linear structure, we propose two SGD-like variants with low memory costs: stochastic sample average gradient (SSAG) and stochastic SAGA (S-SAGA). In particular, the memory cost of SSAG does not depend on the sample size n, while S-SAGA has a memory requirement of O(n), which matches the stochastic variance reduction methods on unperturbed data (Le Roux et al., 2012; Shalev-Shwartz & Zhang, 2013; Defazio et al., 2014a, b). Similar to S-MISO, the proposed algorithms have faster convergence than SGD. Moreover, the convergence rate of S-SAGA depends on a constant that is typically smaller than that of S-MISO. Experimental results on logistic regression and AUC maximization with dropout noise demonstrate the efficiency of the proposed algorithms.

x, ∥x∥=√∑ix2i is its ℓ2-norm. For two vectors x and y, xTy denotes its dot product.

In this paper, we consider the linear model. Given samples {x1,…,xn}, with each xi∈Rd, the regularized risk minimization problem in (1) can be written as:

where ^yi≡xTiθ is the prediction on sample i, and ϕi is a loss. For example, logistic regression corresponds to ϕi(^yi)=log(1+exp(−yi^yi)), where {y1,…,yn}

are the training labels; and linear regression corresponds to

is the dropout probability, and each component of

ξ is an independent draw from a scaled Bernoulli(1−p)random variable. With random perturbations, (3) becomes the following expected risk minimization problem:

As the objective contains an expectation, computing the gradient is infeasible as infinite samples are needed. As an approximation, SGD uses the gradient from a single sample. However, this has large variance.

In this paper, we make the following assumption on fi(θ;ξi)≡ϕi(^xTiθ)+g(θ) in (4). Note that this implies ϕi(^xTiθ) and F are also L-smooth.

EX can be obtained as

However, with the expectation in (4), the full gradient (i.e., EY in (5)) cannot be evaluated, and variance reduction can no longer be used. Very recently, the stochastic MISO (S-MISO) algorithm (Bietti & Mairal, 2017) is proposed for solving (4). Its convergence rate outperforms that of SGD by having a smaller multiplicative constant. However, S-MISO requires an additional O(nd) space, which prevents its use on large data sets.

Let the iterate at iteration t be θt−1. To approximate the gradient ∇F(θt−1) in (4), SGD uses the gradient gt=ϕ′it(^xTitθt−1)^xit+∇g(θt−1) evaluated on a single sample ^xit, where it is sampled uniformly from [n]≡{1,2,…,n}. The variance of gt is usually assumed to be bounded by a constant, as

where the expectation is taken w.r.t. both the random index it and perturbation ξt at iteration t. Note that the gradient of regularizer g does not contribute to the variance.

At iteration t, the stochastic gradient of the loss ϕi(^xTiθ) for sample ^xit is ϕ′(^xTitθ)^xit. Thus, the gradient direction is determined by ^xit, while parameter θ only affects its scale. With this observation, we consider using at^xit as a control variate for ϕ′(^xTitθ)^xit, where at may depend on past information but not on ^xit. Note that the gradient component ∇g(θ) is deterministic, and does not contribute to the construction of control variate. Using (5), the resultant gradient estimator is:

where ~xt is an estimate of E[^xit]. For example, ~xt can be defined as

so that ~xt can be incrementally updated as ^xit’s are sampled. As ^xit

’s are i.i.d., by the law of large number, the sample average

The following shows that zt in (7) is a biased estimator of the gradient ∇F(θt−1). As ~xt converges to E[^xit], zt is still asymptotically unbiased.

Note that E[^xit]=1n∑ni=1Eξi[^xi], where Eξi denotes the expectation w.r.t. ξi. We assume that each Eξi[^xi] can be easily computed. This is the case, for example, when the noise is dropout noise or additive zero-mean noise, and Eξi[^xi]=xi (van der Maaten et al., 2013). This suggests replacing ~xt in (7) by ~x≡1n∑ni=1Eξi[^xi] (which is equal to E[^xit]), leading to the estimator:

The following shows that vt is unbiased, and also provides an upper bound of its variance.

For dropout noise and other additive noise with known variance, one can compute Eξi∥^xi∥2 for each i∈[n], and then average to obtain E[∥^x∥2]. However, evaluating the expectation in the numerator of (10) is infeasible.

Instead, we define at as

for t≥1, and approximate the expectations in the numerator and denominator by moving averages:

The resulting algorithm, called stochastic sample-average gradient (SSAG), is shown in Algorithm 1. Compared to S-MISO (Bietti & Mairal, 2017), SSAG is more computationally efficient. It does not require an extra O(nd) memory, and only requires one single gradient evaluation (step 6) in each iteration.

The following Proposition shows that at in (11) is asymptotically optimal for appropriate choices of ηt and βt.

Recall that in (9), ϕ′it(^xTitθt−1)^xit plays the role of X in (5), and at^xit plays the role of Y. However, the corresponding X and Y in (5) can be negatively correlated in some iterations. This is partly because at in (9) does not depend on ^xit, though at^xit serves as a control variate for ϕ′it(^xTitθt−1)^xit. Thus, it is better for each sample ^xi to have its own scaling factor, leading to the estimator:

where mt−1=E[ait^xit]=1n∑ni=1aiEξi[^xi]. Note that mt can be updated sequentially as:

Besides, (13) reduces to the SAGA estimator (Defazio et al., 2014a) when the random noise is removed. The whole procedure, which will be called stochastic SAGA (S-SAGA), is shown in Algorithm 2.

S-SAGA needs an additional O(nd) space for {a1,…,an} and {Eξ1[^x1],…,{Eξn[^xn]}. However, as discussed in Section 3.1.1, Eξi[^xi]=xi for many types of noise. Hence, Eξi[^xi]’s do not need to be explicitly stored, and the additional space is reduced to O(n). This is significantly smaller than that of S-MISO, which always requires O(nd) additional space.

In this section, we provide convergence results for SSAG and S-SAGA on problem (4).

For SSAG, we make the following additional assumptions.

Let the minimizer of (4) be θ∗. The following Theorem shows that SSAG has O(1/t) convergence rate, which is similar to SGD (Bottou et al., 2016).

Note that this ηt also satisfies the conditions in Proposition 3. The condition c>1/μ is crucial to obtaining the O(1/t) rate. It has been observed that underestimating c can make convergence extremely slow (Nemirovski et al., 2009). When the model is ℓ2-regularized, μ can be estimated by the corresponding regularization parameter.

The O(n) term is due to initialization of m0 and amortized over multiple data passes. In contrast, the time complexity for SGD is O(κC1/ϵ+σ2sκ2/ϵ), where σ2s is defined in (6) (Bottou et al., 2016). To compare σ2s with σ2a, we assume that the perturbed samples have finite variance σ2x:

The variance of the SGD estimator gt can be bounded as

Thus, the gradient variance of SGD has two terms, one involving σ2a and the other involving atσ2x. In particular, if the derivative ϕ′it(^xTitθt−1) is constant, then σ2a=0, and only the perturbed sample variance σ2x contributes to the gradient variance of SGD. For a large class of functions including the logistic loss and smoothed hinge loss, ϕ′it(^xTitθt−1) is nearly constant in some regions. In this case, we have a2tσ2x≈σ2s.

Besides Assumption 1, we assume the following:

S-MISO considers the variance of the difference in gradients due to noise:

and its convergence rate is O(σ2mκ2/t). The bounds for σ2m and σ2c are similar in form. However, σ2c can be small when the difference ϕ′(^xTiθ)−ϕ′(^x′Tiθ) is small, while it is not the case for σ2m. In particular, when ϕ′(^xTθ) is a constant regardless of random perturbations, σ2c=0.

The following Corollary considers the time complexity of S-SAGA.

, additional speedup can be achieved by first running the algorithm with a constant stepsize for a few epochs, and then applying the decreasing stepsize. This trick is not used here. If incorporated, it can be shown that the

A summary of the convergence results is shown in Table 1. As can be seen, by exploiting the linear model structure, SSAG has a smaller variance constant than SGD (σ2a vs σ2s) while having comparable space requirement. S-SAGA improves over S-MISO and achieves gains both in terms of iteration complexity and storage.

The complexity bounds in Corollaries 1 and 2 depend quadratically on the condition number κ. This may be problematic on ill-conditioned problems. To alleviate this problem, one can use iterate averaging (Bietti & Mairal, 2017), which outputs

where T is the total number of iterations. It can be easily seen that (16) can be efficiently implemented in an online fashion without the need for storing θt’s:

Similarly, we have the following for S-SAGA.

The following Corollary considers the case where n=O(κ) (Johnson & Zhang, 2013).

Consider the ℓ2-regularized logistic regression model with dropout noise, with dropout probability p=0.3. This can be formulated as the following optimization problem:

, the higher the condition number. Experiments are performed on two high-dimensional data sets from the LIBSVM archive (Table