Deep neural networks (DNNs) based saliency detection approaches have succeed in recent years, and improved the performance by a great margin via increasingly sophisticated network architecture. Despite the performance improvement, the computational cost is excessively high for such low level visual task. In this work, we propose a light-weighted saliency detection approach with distinctively lower runtime memory cost and model size. We evaluated the performance of our approach on multiple benchmark datasets, and achieved competitive results comparing with state-of-the-art methods on multiple metrics. We also evaluated the computational cost of our approach with multiple measurements. The runtime memory cost of our approach is 42 to 99 times fewer comparing with the previous DNNs based methods. The model size of our approach is 63 to 129 times smaller, and takes less than 1 Megabytes storage space with out any deep compression technique. 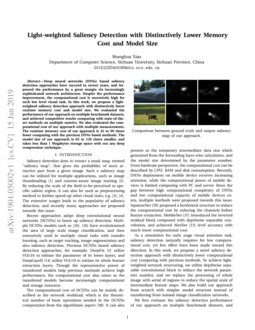 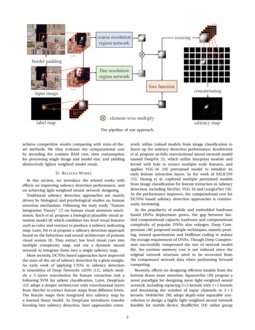 Saliency detection aims to extract a mask map, termed ”saliency map”, that gives the probability of most attractive part from a given image. Such a saliency map can be utilized for multiple applications, such as image thumbnailing

[1] and content-aware image resizing [2]. By reducing the scale of the field-to-be-perceived to specific salient region, it can also be used as preprocessing method to further speed-up other visual tasks, e.g. [3, 4]. The extensive usages leads to the popularity of saliency detection, and recently many approaches are proposed towards this issue.

have revolutionized the area of large scale image classification, and then extensively used in multiple visual tasks with transfer learning, such as target tracking, image segmentation and also saliency detection. Previous DCNNs based saliency detection approaches, for example, DeepFix

[5] utilize VGG16 to initiate the parameter of its lower layers, and DeepGazeII [14]

As a simulation for early stage visual attention task, saliency detection naturally requires for low computational cost, yet few effort have been made toward this direction. In this work, we propose a novel saliency detection approach with distinctively lower computational cost comparing with previous methods. To achieve light-weighted network structuring, we utilize depthwise separable convolutional block to reduce the network parameter number, and we replace the processing of whole image with serial of regions to reduce the spatial scale of intermediate feature maps. We also build our approach from scratch with simpler model structure instead of transferring from trained image classification networks.

We first evaluate the saliency detection performance of our approach on multiple benchmark datasets, and achieve competitive results comparing with state-of-the-art methods. We then evaluate the computational cost by recording the runtime RAM cost, time consumption for processing single image and model size, and yielding distinctively lighter weighted model result.

In this section, we introduce the related works with efforts on improving saliency detection performance, and on achieving light-weighted neural network designing.

[8] which combines low level visual features such as color and contrast to produce a saliency indicating map. Later, Itti et al propose a saliency detection approach based on the behaviour and neural architecture of primate visual system [9]. They extract low level visual cues into multiple conspicuity map, and use a dynamic neural network to integrate them into a single saliency map.

, which utilize inception module and kernel with hole to extract multiple scale features, and applies VGG-16

[10] pretrained model to initialize its early feature extraction layers. In the work of SALICON [15], Huang et al. explored multiple pretrained models from image classification for feature extraction in saliency detection, including AlexNet, VGG-16 and GoogLeNet [16]. As the performance improves, the computational cost for DCNNs based saliency detection approaches is continuously increasing.

As the popularity of mobile and embedded hardware based DNNs deployment grows, the gap between limited computational capacity hardware and computational complexity of popular DNNs also enlarges. Deep Compression [40] proposed multiple techniques, namely pruning, trained quantization and Huffman coding to reduce the storage requirement of DNNs. Though Deep Compression successfully compressed the size of network model file, the runtime memory cost is not reduced since the original network structure need to be recovered from the compressed network data when performing forward computing.

In this work, by utilizing these efficient model designing paradigm, we propose a DCNNs based saliency detection approach with distinctively lower computational cost comparing with previous methods.

We describe the details of the three adopted strategies in the following.

We also adopt linear bottleneck and inverted residual on the depth-wise separable convolutional block, which use linear activation instead of ReLU activation after the bottleneck convolution layer, and add an element-wise plus operation

Outt=Bt+Bt−1 if the channel number is consistent. By stacking the bottleneck block and various convolutional layers, we construct the feature extraction network for our saliency detection approach. The detail settings of the network is shown in Table.1.

Regional Input: To reduce the memory cost for temporarily storing feature maps with large spatial sizes, we replace the processing of the whole image to processing of serial of regions. For example, with the sample network structure, the memory cost for processing a 640×480 sized image is 48 times larger than processing a 80×80 sized image. Thus we crop the input image into regions and sequentially produce the saliency regions, then concatenate the output regions to the final saliency map.

Since we process sample images with cropped non-overlapping regions, the features are extracted from more local and object-oriented perspectives, resulting in limited representative power from more global perspective. Thus we apply multiscale feature extraction to learn richer semantics, with two networks to extract features from relatively coarse and fine resolution simultaneously. The two networks share the same structure shown in Table.1, and trained independently with fine and coarse resolution regions with size of 80×80. We obtain the two input regions following:

To avoid extra computational complexity caused by the redundancy, we build our network from scratch instead of transferring from exist model such as VGGNet [10]. The network includes 1 3×3 kernel layer and 12 depth-wise separable convolutional block layers for feature extraction, with less channels at the bottom layers.

After the model construction, we train our approach using gradient descent. We use mean absolute error as loss function to calculate the distance between the output saliency region and label region, and use Adam optimizer

We train our approach on SALICON saliency detection dataset [15]. SALICON dataset is currently the biggest dataset for saliency detection task, with 10000 training samples, 5000 validation samples and 5000 testing samples from MS COCO dataset [20]. The stimuli sample set is consist of various indoor and outdoor scenes and objects with rich semantics. The ground truth fixation information is obtained by recording the mouse trajectory when multiple observers using mouse to direct their fixation on image stimuli during 5 seconds free viewing and 2 seconds followed waiting interval. To use SALICON to train our approach, each 640×480 sized sample image is cropped to 48 80×80×2 fine and coarse resolution regions, forming a new training set with 480000 samples.

At training phase, we use batch learning to accelerate convergence with batch size set to 48. The entire training takes about 24 hours on a 12GB RAM NVIDIA Tesla K40m GPU with the MxNet deep learning framework

MIT300 We mainly evaluate our model on the testing set of MIT300 [27] benchmark dataset. The MIT300 benchmark dataset is composed of 300 samples with various indoor and outdoor scenes and objects. The fixation information is extracted by directly recording the eye movements of 39 observers at 3 seconds free viewing at given sample. To avoid overfitting the dataset, the ground truth fixation maps are held out at the benchmark server for evaluation remotely, and the maximum submission is limited to 2 times per month. The sample sizes from MIT300 are ranged with x-axis from 679 to 1024 and y-axis from 457 to 1024, which are larger than samples from SALICON that we train our model on. Thus when evaluating on MIT300 dataset, we first resize the sample with short axis to 480 and long axis accordingly. The evaluation results are show in Table.2.

CAT2000 We also evaluate our approach on CAT2000 [19] benchmark dataset. The CAT2000 dataset consists of one training set with accessable ground truth and one testing set with held out ground truth fixation maps. The training and testing set contains 20 different categories (100 images for each one) from Action to Line Drawing. The fixations are integrated from 5 seconds free viewing of 24 observers. Since the sample size of CAT2000 dataset is 1920×1080, we resize the samples to 854×480 for evaluation.

At performance evaluation, multiple metrics are used, since previous study by Riche et al. [23] shows that no single metric has concrete guarantee of fair comparison. We briefly describe the used metrics for better understanding of the results. We denote S for output saliency map, Gb for ground truth fixation map with Gaussian blur and Gp for ground truth fixation pixel map at following description.

: Area Under ROC Curve (AUC) measures the area under the Receiver Operating Characteristic (ROC) curve, which consists of true and false positive rate under different binary classifier threshold between

NSS: Normalized Scanpath Saliency [26] is the mean value at on the fixation pixels location in normalized S

: Kullback-Leibler Divergence (KLD) is a non-symmetric metric. It measures the information lost when using

We evaluate the saliency detection performance of our approach on test set of MIT300 and CAT2000 benchmark datasets, the results are shown in Table.2 and Table.3 respectively. From the tables we can see that our approach achieves competitive results comparing with previous methods transferred from large scale image classification models, and outperforms traditional and shallow network based methods.

As the goal of this work is to propose a light-weighted DNNs based architecture for saliency prediction, we evaluate the computational complexity of our approach and some previous works. We briefly describe the measurements we used for computational complexity evaluation. We run all the tests on a Intel Core i7-4710MQ CPU with MxNet deep learning framework.

Memory Cost: memory cost is the average RAM consumption when processing one 640×480 sized image. Since the deep learning framework have extra memory requirement besides the actual model consumed RAM, we give two results for memory cost: one for total memory cost when running the model, one for the net consumption which is the rough cost minus the framework minimal RAM requirement.

Parameter Size: parameter size is the total number of learnable parameters for each model such as the convolution kernels and fully connection weights. The parameter is calculated follows the equation

where W and H denotes the feature map width and height.

The results are shown in Table.4. We compared the computational cost of our approach with some deep learning based previous works on the described measurements. Notice that when running neural networks, the framework (in our case MxNet) has a minimum resource consumption. Thus we run a emtpy network with no operation as baseline for minimum computational cost and further calculate the actual computational cost of the networks.