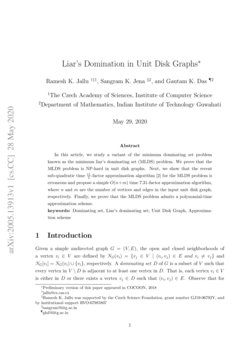 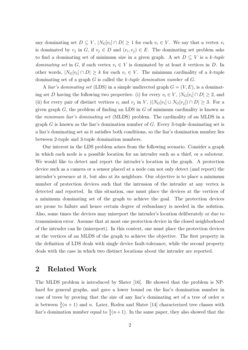 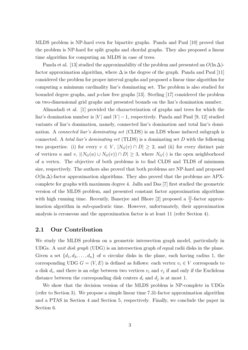 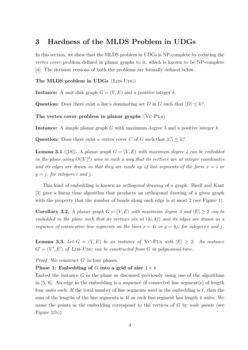 Our interest in the LDS problem arises from the following scenario. Consider a graph in which each node is a possible location for an intruder such as a thief, or a saboteur. We would like to detect and report the intruder’s location in the graph. A protection device such as a camera or a sensor placed at a node can not only detect (and report) the intruder’s presence at it, but also at its neighbors. Our objective is to place a minimum number of protection devices such that the intrusion of the intruder at any vertex is detected and reported. In this situation, one must place the devices at the vertices of a minimum dominating set of the graph to achieve the goal. The protection devices are prone to failure and hence certain degree of redundancy is needed in the solution. Also, some times the devices may misreport the intruder’s location deliberately or due to transmission error. Assume that at most one protection device in the closed neighborhood of the intruder can lie (misreport). In this context, one must place the protection devices at the vertices of an MLDS of the graph to achieve the objective. The first property in the definition of LDS deals with single device fault-tolerance, while the second property deals with the case in which two distinct locations about the intruder are reported.

Panda et al. [9] studied the approximability of the problem and presented an O(lnΔ)-factor approximation algorithm, where Δ is the degree of the graph. Panda and Paul [10] considered the problem for proper interval graphs and proposed a linear time algorithm for computing a minimum cardinality liar’s dominating set. The problem is also studied for bounded degree graphs, and p-claw free graphs [9]. Sterling [17] considered the problem on two-dimensional grid graphs and presented bounds on the liar’s domination number.

We study the MLDS problem on a geometric intersection graph model, particularly in UDGs. A unit disk graph (UDG) is an intersection graph of equal radii disks in the plane. Given a set {d1,d2,…,dn} of n circular disks in the plane, each having radius 1, the corresponding UDG G=(V,E) is defined as follows: each vertex vi∈V corresponds to a disk di, and there is an edge between two vertices vi and vj if and only if the Euclidean distance between the corresponding disk centers di and dj is at most 1.

We show that the decision version of the MLDS problem is NP-complete in UDGs (refer to Section 3). We propose a simple linear time 7.31-factor approximation algorithm and a PTAS in Section 4 and Section 5, respectively. Finally, we conclude the paper in Section 6.

3 Hardness of the MLDS Problem in UDGs

In this section, we show that the MLDS problem in UDGs is NP-complete by reducing the vertex cover problem defined in planar graphs to it, which is known to be NP-complete [4]. The decision versions of both the problems are formally defined below.

The MLDS problem in UDGs

A unit disk graph G=(V,E) and a positive integer k.

Does there exist a liar’s dominating set D in G such that |D|≤k?.

A simple planar graph G with maximum degree 3 and a positive integer k.

Does there exist a vertex cover C of G such that |C|≤k?.

A planar graph G=(V,E) with maximum degree 4 can be embedded in the plane using O(|V|2) area in such a way that its vertices are at integer coordinates and its edges are drawn so that they are made up of line segments of the form x=i or y=j, for integers i and j.

A planar graph G=(V,E) with maximum degree 3 and |E|≥2 can be embedded in the plane such that its vertices are at (4i,4j) and its edges are drawn as a sequence of consecutive line segments on the lines x=4i or y=4j, for integers i and j.

Phase 3: Adding extra line segments and points Add a line segment of length 1.4 units (on the lines x=4i or y=4j for some integers i or j) for every point pi, which corresponds to a vertex vi in G, without coinciding with the line segments that had already been drawn. Observe that adding this line segment on the lines x=4i or y=4j is possible without losing the planarity as the maximum degree of G is 3. Now, add three points (say xi, yi, and zi) on these line segments at distances 0.2, 1.2, and 1.4 units, respectively, from pi. We name the points added in this phase support points. Phase 4: Construction of UDG For convenience, let us denote the set of node points, joint points, and support points by N, J, and S, respectively. Let N={pi∣vi∈V}, J={q1,q2,…,q4ℓ}, and S={xi,yi,zi∣vi∈V}. We construct a UDG G′=(V′,E′), where V′=N∪J∪S and there is an edge between two points in V′ if and only if the Euclidean distance between the points is at most 1 (see Figure 1(c)). Observe that, |N|=|V|(=n), |J|=4ℓ, where ℓ is the total number of line segments in the embedding, and |S|=3|V|(=3n). Hence, |V′|=4(n+ℓ) and ℓ is bounded by a polynomial of n. Therefore G′ can be constructed in polynomial-time. ∎

Lds-Udg∈NP, since for any given set D⊆V and a positive integer k, we can verify whether D is a liar’s dominating set of size at most k or not in polynomial-time.

Necessity: Let C⊆V be a vertex cover of G such that |C|≤k. Let N′={pi∈N∣vi∈C}, i.e., N′ is the set of vertices (or node points) in G′ that correspond to the vertices in C. From each segment in the embedding we choose 3 vertices (joint points). The set of chosen vertices, say J′(⊆J), together with N′ and S will form an LDS of desired cardinality in G′. We now discuss the process of obtaining the set J′. Initially J′=∅. As C is a vertex cover, every edge in G has at least one of its end vertices in C. Let (vi,vj) be an edge in G and vi∈C (the tie can be broken arbitrarily if both vi and vj are in C). Note that the edge (vi,vj) is represented as a sequence of line segments in the embedding. Start traversing the segments (of (vi,vj)) from pi, where pi corresponds to vi, and add all the vertices to J′ except the first one from each segment encountered in the traversal (see (p2,p5) in Figure 2 (b). The bold vertices are part of J′ while traversing from p2).

Apply the above process to each edge in G. Observe that the cardinality of J′ is 3ℓ as we have chosen 3 vertices from each segment in the embedding. Let D=N′∪J′∪S. Now, we argue that D is a liar’s dominating set in G′.

If we proceed as in Case a, we can observe that D must contain all the four vertices on (ℓ′2+1)-th segment, i.e., the middle segment, (see Figure 3(b)). Which is a contradiction to our assumption that no segment, representing the edge (vi,vj), contains more than three vertices in D.

For completeness here we give the idea of the algorithm proposed in [2] briefly. As a first step, the point set P (i.e., the set of disk centers) is sorted according to their x-coordinates. Now consider the left most point, say pi, and consider pi in the solution. Next, compute the set of points of P that are inside the circle centered at pi and of radius 12, 1, and 32. Let these sets be Cov12(C(pi)), Cov1(C(pi)), and Cov32(C(pi)), respectively. The points which lie outside the set Cov32(C(pi)), their corresponding disks of radius 1 do not contain any point from Cov12(C(pi)). So, it suffice to consider the points inside Cov32(C(pi)) to ensure liar’s domination for Cov12(C(pi)). Since pi is the left most point in P, the set Q=Cov32(C(pi))∖Cov1(C(pi)) can contain at most five mutually independent points (i.e., the mutual distance between those five points is greater than one. In other words, the unit radius disks centered at those points do not contain the centers of other disks). In the next step (call it Case 1), for each point qi∈Q, the algorithm chooses at most two points from the set S(qi)=Cov12(C(pi))∩Cov1(C(qi)) in the solution, if available, where Cov1(C(qi)) is the set of points lying in the unit disk centered at qi. After selection of these points, Q is updated to Q∖Cov1(C(qi)) and proceed to next point in Q. Thus, the algorithm picks at most 5×2+1=11 points in this iteration. Let S=⋃qi∈QS(qi). However, S could be an empty set due to either Q=∅ or S(qi)=∅ for each qi∈Q (call it Case 2). If S=∅ or |S|<2, then the algorithm chooses at most 4 points (including pi) from Cov1(C(pi)) depending on the cardinality of Cov12(C(pi)). Thus, in this case the algorithm picks fewer than 11 points from Cov1(C(pi)). The points chosen so far ensures the liar’s domination for the points in Cov12(C(pi)). Now, P is updated to P∖Cov12(C(pi)), and the process is repeated (with the next leftmost point, say pj) until P is empty.

Suppose pi and pj are the left most points considered in two successive iterations, respectively. There may be a case that the algorithm could end up by choosing a set of 11 points in the solution to dominate Cov12(C(pj)) for which the same optimal solution for Cov12(C(pi)) is enough to ensure liar’s domination for Cov12(C(pj)). We elaborate our claim in detail with an example.

Consider the set of points in Figure 4(a) as an instance to the algorithm. The points are sorted according to their x-coordinates. Let the leftmost point be pi (see Figure 4(b)). The points {q1,q2,q3,q4,q5}∈Q and are five mutually independent points chosen by the algorithm such that Cov12(C(pi))∩Cov1(C(qj))=2, for j=1,2,…,5. Along with pi, the total number of points chosen in this iteration is 11. Update P=P∖Cov12(C(pi)). In the next iteration, pj is the leftmost point (see Figure 4(c)) and {q6,q7,q8,q9,q10}∈Q are five mutually independent points chosen by the algorithm so that Cov12(C(pj))∩Cov1(C(qj))=2, for i=6,7,…,10. The algorithm chooses 11 points (including pj) in the solution. Observe that in both the iterations the algorithm doesn’t enter Case 2 and, hence, chooses 22 points. In fact, any two (resp. three) red points (see Figure 4 (c)) are sufficient to ensure the liar’s domination first (resp. second) condition for the point sets Cov12(C(pi)) and Cov12(C(pj)). After a few iterations pk will be chosen as the next left most point and the algorithm chooses 11 points (by Case 1) in the solution (see Figure 4(d)). However, the same three red points ensures liar’s domination for Cov12(C(pi)), Cov12(C(pj)), and Cov12(C(pk)). So the approximation factor of the algorithm proposed in [2] is at least 11.

The set D returned by Algorithm 1 is an LDS of G.

Let D∗ be an MLDS of G. Algorithm 1 sequentially computes three maximal independent sets I1, I2, and I3 in G and I=I1∪I2∪I3 is not necessarily be an LDS of G as there might be some vertices with one of the following cases: (i) a vertex u∈I1 not satisfying the first condition, or (ii) a pair of distinct vertices u∈I1 and v∈I2 not satisfying the second condition of the liar’s domination. In the former case we add an arbitrary neighbor of u, and in the latter case we add an neighbor w of v. Note that in either case such a neighbor is guaranteed to exist in G, and |D|≤|I|+|I1|. Without loss of generality we can assume that |I3|≤|I2|≤|I1|. Therefore, |D|≤4|I1|≤4⋅√103|D∗|≤7.31|D∗| (by Lemma 4.1). The running time follows as Algorithm 1 uses the subroutine MIS(⋅) (in line number 6) to compute a maximal independent set. ∎

In this section, we propose a PTAS for the MLDS problem in UDGs, i.e., for a given UDG G=(V,E) and a parameter ϵ>0, we propose an algorithm which produces a liar’s dominating set of size no more than (1+ϵ) times the size of a minimum liar’s dominating set in G. We use δG(u,v) to denote the number of edges on a shortest path between u and v in G. For A,B⊆V, δG(A,B) denotes the distance between A and B and is defined as δG(A,B)=minu∈A,v∈B{δG(u,v)}. For A⊆V, D(A) and Dopt(A) denote an LDS and an optimal (minimum size) LDS of A in G, respectively. We define the closed neighborhood of a set A⊆V as NG[A]=⋃v∈ANG[v].