Lexical Features in Coreference Resolution: To be Used With Caution 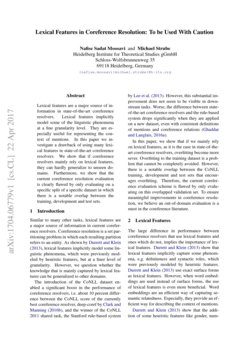 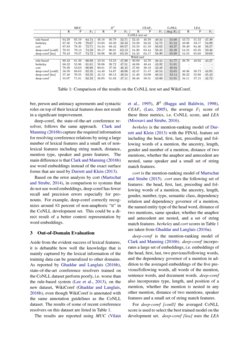 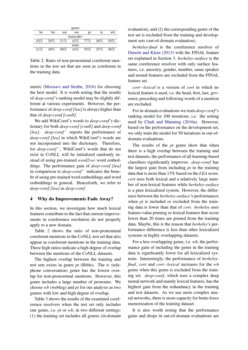 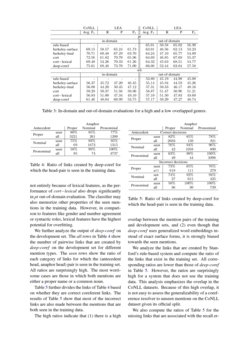 Similar to many other tasks, lexical features are a major source of information in current coreference resolvers. Coreference resolution is a set partitioning problem in which each resulting partition refers to an entity. As shown by durrett13b, lexical features implicitly model some linguistic phenomena, which were previously modeled by heuristic features, but at a finer level of granularity. However, we question whether the knowledge that is mainly captured by lexical features can be generalized to other domains.

In this paper, we show that if we mainly rely on lexical features, as it is the case in state-of-the-art coreference resolvers, overfitting become more sever. Overfitting to the training dataset is a problem that cannot be completely avoided. However, there is a notable overlap between the CoNLL training, development and test sets that encourages overfitting. Therefore, the current coreference evaluation scheme is flawed by only evaluating on this overlapped validation set. To ensure meaningful improvements in coreference resolution, we believe an out-of-domain evaluation is a must in the coreference literature.

durrett13b show that the addition of some heuristic features like gender, number, person and animacy agreements and syntactic roles on top of their lexical features does not result in a significant improvement.

deep-coref, the state-of-the-art coreference resolver, follows the same approach. clarkkevin16a capture the required information for resolving coreference relations by using a large number of lexical features and a small set of non-lexical features including string match, distance, mention type, speaker and genre features. The main difference is that clarkkevin16a use word embeddings instead of the exact surface forms that are used by durrett13b.

Based on the error analysis by cort Martschat and Strube (2014), in comparison to systems that do not use word embeddings, deep-coref has fewer recall and precision errors especially for pronouns. For example, deep-coref correctly recognizes around 83 percent of non-anaphoric “it” in the CoNLL development set. This could be a direct result of a better context representation by word embeddings.

Aside from the evident success of lexical features, it is debatable how well the knowledge that is mainly captured by the lexical information of the training data can be generalized to other domains. As reported by ghaddar16b, state-of-the-art coreference resolvers trained on the CoNLL dataset perform poorly, i.e. worse than the rule-based system Lee et al. (2013), on the new dataset, WikiCoref Ghaddar and Langlais (2016b), even though WikiCoref is annotated with the same annotation guidelines as the CoNLL dataset. The results of some of recent coreference resolvers on this dataset are listed in Table 1.

berkeley is the mention-ranking model of durrett13b with the FINAL feature set including the head, first, last, preceding and following words of a mention, the ancestry, length, gender and number of a mention, distance of two mentions, whether the anaphor and antecedent are nested, same speaker and a small set of string match features.

cort is the mention-ranking model of martschat15c. cort uses the following set of features: the head, first, last, preceding and following words of a mention, the ancestry, length, gender, number, type, semantic class, dependency relation and dependency governor of a mention, the named entity type of the head word, distance of two mentions, same speaker, whether the anaphor and antecedent are nested, and a set of string match features. berkeley and cort scores in Table 1 are taken from ghaddar16a.

deep-coref is the mention-ranking model of clarkkevin16a. deep-coref incorporates a large set of embeddings, i.e. embeddings of the head, first, last, two previous/following words, and the dependency governor of a mention in addition to the averaged embeddings of the five previous/following words, all words of the mention, sentence words, and document words. deep-coref also incorporates type, length, and position of a mention, whether the mention is nested in any other mention, distance of two mentions, speaker features and a small set of string match features.

4 Why do Improvements Fade Away?

In this section, we investigate how much lexical features contribute to the fact that current improvements in coreference resolution do not properly apply to a new domain.

The highest overlap between the training and test sets exists in genre pt (Bible). The tc (telephone conversation) genre has the lowest overlap for non-pronominal mentions. However, this genre includes a large number of pronouns. We choose wb (weblog) and pt for our analysis as two genres with low and high degree of overlap.

cort−lexical is a version of cort in which no lexical feature is used, i.e. the head, first, last, governor, preceding and following words of a mention are excluded.

The results of the pt

genre show that when there is a high overlap between the training and test datasets, the performance of all learning-based classifiers significantly improves.

deep-coref has the largest gain from including pt in the training data that is more than 13% based on the LEA score. cort uses both lexical and a relatively large number of non-lexical features while berkeley-surface is a pure lexicalized system. However, the difference between the berkeley-surface’s performances when pt is included or excluded from the training data is lower than that of cort. berkeley uses feature-value pruning so lexical features that occur fewer than 20 times are pruned from the training data. Maybe, this is the reason that berkeley’s performance difference is less than other lexicalized systems in highly overlapping datasets.

For a less overlapping genre, i.e. wb, the performance gain of including the genre in the training data is significantly lower for all lexicalized systems. Interestingly, the performance of berkeley-final, cort and cort−lexical increases for the wb genre when this genre is excluded from the training set. deep-coref

, which uses a complex deep neural network and mainly lexical features, has the highest gain from the redundancy in the training and test datasets. As we use more complex neural networks, there is more capacity for brute-force memorization of the training dataset.

It is also worth noting that the performance gains and drops in out-of-domain evaluations are not entirely because of lexical features, as the performance of cort−lexical also drops significantly in pt out-of-domain evaluation. The classifier may also memorize other properties of the seen mentions in the training data. However, in comparison to features like gender and number agreement or syntactic roles, lexical features have the highest potential for overfitting.

We further analyze the output of deep-coref on the development set. The all rows in Table 4 show the number of pairwise links that are created by deep-coref on the development set for different mention types. The seen rows show the ratio of each category of links for which the (antecedent head, anaphor head) pair is seen in the training set. All ratios are surprisingly high. The most worrisome cases are those in which both mentions are either a proper name or a common noun.

Table 5 further divides the links of Table 4 based on whether they are correct coreferent links. The results of Table 5 show that most of the incorrect links are also made between the mentions that are both seen in the training data.

The high ratios indicate that (1) there is a high overlap between the mention pairs of the training and development sets, and (2) even though that deep-coref uses generalized word embeddings instead of exact surface forms, it is strongly biased towards the seen mentions.

We analyze the links that are created by Stanford’s rule-based system and compute the ratio of the links that exist in the training set. All corresponding ratios are lower than those of deep-coref in Table 5. However, the ratios are surprisingly high for a system that does not use the training data. This analysis emphasizes the overlap in the CoNLL datasets. Because of this high overlap, it is not easy to assess the generalizability of a coreference resolver to unseen mentions on the CoNLL dataset given its official split.

For example, the deep-coref links include 31 cases in which both mentions are either proper names or common nouns and the head of one of the mentions is “country”. For all these links, “country” is linked to a mention that is seen in the training data. Therefore, this raises the question how the classifier would perform on a text about countries not mentioned in the training data.

Memorizing the pairs in which one of them is a common noun could help the classifier to capture world knowledge to some extent. From the seen pairs like (Haiti, his country), and (Guangzhou, the city) the classifier could learn that “Haiti” is a country and “Guangzhou” is a city. However, it is questionable how useful word knowledge is if it is mainly based on the training data.

The coreference relation of two nominal noun phrases with no head match can be very hard to resolve. The resolution of such pairs has been referred to as capturing semantic similarity Clark and Manning (2016b). deep-coref links 49 such pairs on the development set. Among all these links, only 5 pairs are unseen on the training set and all of them are incorrect links.

The effect of lexical features is also analyzed by levy15 for tasks like hypernymy and entailment. They show that state-of-the-art classifiers memorize words from the training data. The classifiers benefit from this lexical memorization when there are common words between the training and test sets.

Moreover, we show that there is a significant overlap between the training and validation sets in the CoNLL dataset. The LEA metric Moosavi and Strube (2016)

is introduced as an attempt to make coreference evaluations more reliable. However, in order to ensure valid developments on coreference resolution, it is not enough to have reliable evaluation metrics. The validation set on which the evaluations are performed also needs to be reliable. A dataset is reliable for evaluations if a considerable improvement on this dataset indicates a better solution for the coreference problem instead of a better exploitation of the dataset itself.

The authors would like to thank Kevin Clark for answering all of our questions regarding deep-coref. We would also like to thank the three anonymous reviewers for their thoughtful comments. This work has been funded by the Klaus Tschira Foundation, Heidelberg, Germany. The first author has been supported by a Heidelberg Institute for Theoretical Studies PhD. scholarship.