We provide an algorithm that speeds up polynomial and interaction feature expansion on sparse matrices. The algorithm operates on and produces a compressed sparse row matrix with no densification. It works by defining a bijective function involving simplex numbers of column indices in the original matrix to column indices in the expanded matrix. This function allows for only the nonzero elements to be iterated over and multiplied together, greatly improving the expansion of sparse matrices in compressed sparse row format. For a vector of dimension D and density 0 < d < 1, the algorithm has time complexity Θ(d^KD^K) where K is the polynomial-feature order; this is an improvement by a factor d^K over the standard method. 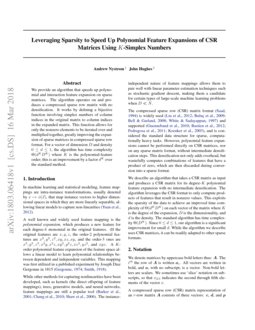 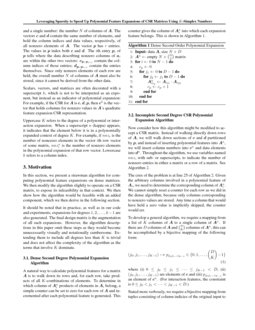 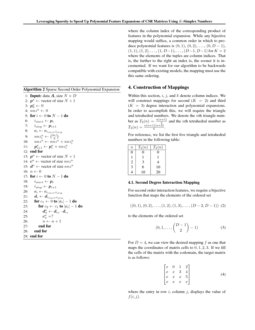 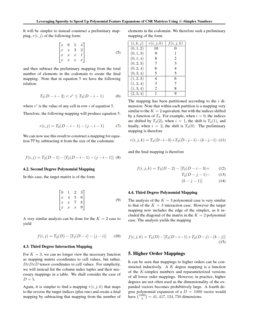 Sinkhorn limits in finitely many steps

x↦ϕ(→x), that map instance vectors to higher dimensional spaces in which they are more linearly separable, allowing linear models to capture nonlinearities [1].

While other methods for capturing nonlinearities have been developed, such as kernels (the direct offspring of feature mappings), trees, generative models, and neural networks, feature mappings are still a popular tool

. The instance-independent nature of feature mappings allows them to pair well with linear parameter estimation techniques such as stochastic gradient descent, making them a candidate for certain types of large-scale machine learning problems when

The compressed sparse row (CSR) matrix format [7] is widely used [8, 9, 10, 11] and supported [12, 13, 14, 15], and is considered the standard data structure for sparse, computationally heavy tasks. However, polynomial feature expansions cannot be performed directly on CSR matrices, nor on any sparse matrix format, without intermediate densification steps. This densification not only adds overhead, but wastefully computes combinations of features that have a product of zero, which are then discarded during conversion into a sparse format.

We describe an algorithm that takes a CSR matrix as input and produces a CSR matrix for its degree-K polynomial feature expansion with no intermediate densification. The algorithm leverages the CSR format to only compute products of features that result in nonzero values. This exploits the sparsity of the data to achieve an improved time complexity of Θ(dKDK) on each vector of the matrix where K is the degree of the expansion, D is the dimensionality, and d is the density. The standard algorithm has time complexity Θ(DK). Since 0≤d≤1, our algorithm is a significant improvement for small d. While the algorithm we describe uses CSR matrices, it can be readily adapted to other sparse formats.

We denote matrices by uppercase bold letters thus: A. The ith the row of A is written ai. All vectors are written in bold, and a, with no subscript, is a vector. Non-bold letters are scalars. We sometimes use ‘slice’ notation on subscripts, so that x2:5 indicates the second through fifth elements of the vector x.

A CSR matrix representation of an r-row matrix A consists of three vectors: c, d, and p and a single number: the number N of columns of A. The vectors c and d contain the same number of elements, and hold the column indices and data values, respectively, of all nonzero elements of A. The vector p has r entries. The values in p index both c and d. The ith entry pi of p tells where the data describing nonzero columns of ai are within the other two vectors: cpi:pi+1 contain the column indices of those entries; dpi:pi+1 contain the entries themselves. Since only nonzero elements of each row are held, the overall number N of columns of A must also be stored, since it cannot be derived from the other data.

Scalars, vectors, and matrices are often decorated with a superscript k, which is not to be interpreted as an exponent, but instead as an indicator of polynomial expansion: For example, if the CSR for A is c,d,p, then c2 is the vector that holds columns for nonzero values in A’s quadratic feature expansion CSR representation.

Uppercase K refers to the degree of a polynomial or interaction expansion. When a superscript κ (kappa) appears, it indicates that the element below it is in a polynomially expanded context of degree K. For example, if nnzi is the number of nonezero elements in the vector ith row vector of some matrix, nnzκi is the number of nonzero elements in the polynomial expansion of that row vector. Lowercase k refers to a column index.

In this section we present a strawman algorithm for computing polynomial feature expansions on dense matrices. We then modify the algorithm slightly to operate on a CSR matrix, to expose its infeasibility in that context. We then show how the algorithm would be feasible with a bijective mapping from k-tuples of column indicies in the input matrix to column indices in the polynomial expansion matrix, which we then derive in the following section.

It should be noted that in practice, as well as in our code and experiments, expansions for degrees 1,2,…,k−1 are also generated. The final design matrix is the augmentation of all such expansions. However, the algorithm descriptions in this paper omit these steps as they would become unnecessarily visually and notationally cumbersome. Extending them to include all degrees less than K is trivial and does not affect the complexity of the algorithm as the terms that involve K dominate.

A natural way to calculate polynomial features for a matrix A is to walk down its rows and, for each row, take products of all K-combinations of elements. To determine in which column of Aκi products of elements in Ai belong, a simple counter can be set to zero for each row of A and incremented after each polynomial feature is generated. This counter gives the column of Aκi into which each expansion feature belongs. This is shown in Algorithm 1.

Now consider how this algorithm might be modified to accept a CSR matrix. Instead of walking directly down rows of A, we will walk down sections of c and d partitioned by p, and instead of inserting polynomial features into Aκ, we will insert column numbers into cκ and data elements into dκ. Throughout the algorithm, we use variables named nnz, with sub- or superscripts, to indicate the number of nonzero entries in either a matrix or a row of a matrix. See Algorithm 2.

The crux of the problem is at line 25 of Algorithm 2. Given the arbitrary columns involved in a polynomial feature of Ai, we need to determine the corresponding column of Aκi. We cannot simply reset a counter for each row as we did in the dense algorithm, because only columns corresponding to nonzero values are stored. Any time a column that would have held a zero value is implicitly skipped, the counter would err.

To develop a general algorithm, we require a mapping from a list of K columns of A to a single column of Aκ. If there are D columns of A and (DK) columns of Aκ, this can be accomplished by a bijective mapping of the following form:

Stated more verbosely, we require a bijective mapping from tuples consisting of column indicies of the original input to where the column index of the corresponding product of features in the polynomial expansion. While any bijective mapping would suffice, a common order in which to produce polynomial features is (0,1), (0,2), …, (0,D−1), (1,1), (1,2), …, (1,D−1), …, (D−1,D−1) for K=2 where the elements of the tuples are column indices. That is, the further to the right an index is, the sooner it is incremented. If we want for our algorithm to be backwards compatible with existing models, the mapping must use the this same ordering.

Within this section, i, j, and k denote column indices. We will construct mappings for second (K=2) and third (K=3) degree interaction and polynomial expansions. To accomplish this, we will require the triangle and tetrahedral numbers. We denote the nth triangle number as T2(n)=n(n+1)2 and the nth tetrahedral number as T3(n)=n(n+1)(n+2)6.

For reference, we list the first five triangle and tetrahedral numbers in the following table:

For second order interaction features, we require a bijective function that maps the elements of the ordered set

to the elements of the ordered set

For D=4, we can view the desired mapping f as one that maps the coordinates of matrix cells to 0,1,2,3. If we fill the cells of the matrix with the codomain, the target matrix is as follows:

where the entry in row i, column j, displays the value of f(i,j).

It will be simpler to instead construct a preliminary mapping, r(i,j) of the following form:

and then subtract the preliminary mapping from the total number of elements in the codomain to create the final mapping. Note that in equation 5 we have the following relation:

where ei is the value of any cell in row i of equation 5.

We can now use this result to construct the desired mapping by subtracting it from the size of the codomain:

In this case, the target matrix is of the form

Again, it is simpler to find a mapping r(i,j,k) that maps to the reverse the target indices (plus one) and create a final mapping by subtracting that mapping from the number of elements in the codomain. We therefore seek a preliminary mapping of the form

The mapping has been partitioned according to the i dimension. Note that within each partition is a mapping very similar to the K=2 equivalent, but with the indices shifted by a function of T3. For example, when i=0, the indices are shifted by T3(2), when i=1, the shift is T3(1), and finally, when i=2, the shift is T3(0). The preliminary mapping is therefore

and the final mapping is therefore

It can be seen that mappings to higher orders can be constructed inductively. A K degree mapping is a function of the K-simplex numbers and reparameterized versions of all lower order mappings. However, in practice, higher degrees are not often used as the dimensionality of the expanded vectors becomes prohibitively large. A fourth degree polynomial expansion of a D=1000 vector would have (10004)=41,417,124,750 dimensions.

The algorithm can be generalized to higher degrees by simply adding more nested loops, using higher order mappings, modifying the output dimensionality, and adjusting the counting of nonzero polynomial features in line 9.

Calculating K-degree polynomial features via our method for a vector of dimensionality D and density d requires TK(dD) products. The complexity of the algorithm, for fixed K≪dD, is therefore

For a matrix of size N×D, the complexity is therefore Θ(NdKDK). The dense algorithm (Algorithm 1) does not leverage sparsity, and its complexity is Θ(NDK). Since 0≤d≤1, the sparse algorithm scales polynomially with the degree of the polynomial expansion.

To empirically verify the average time complexity of our algorithm, we implemented both the sparse version and the baseline in the Cython programming language so that results would be directly comparable. We sought the relationships between runtime and the instance count (N), the instance dimensionality (D), and the instance density (d).

To find these relationships, we individually varied N, D, and d while holding the remaining two constant. For each of these configurations, we generated 20

matrices and took the average time to reduce variance. The time to densify did not count against the dense algorithm. Figure-

Note that the point at which the sparse and dense algorithms intersect when varying d is to the right of 0.5, which is when a matrix technically becomes sparse. The point at which this happens will depend on D, but the results show that our algorithm is useful even for some dense matrices.

We have developed an algorithm for performing polynomial feature expansions on CSR matrices that scales polynomially with respect to the density of the matrix. The areas within machine learning that this work touches are not en vogue, but they are workhorses of industry, and every improvement in core representations has an impact across a broad range of applications.