Although Recommender Systems have been comprehensively studied in the past decade both in industry and academia, most of current recommender systems suffer from the following issues: 1) The data sparsity of the user-item matrix seriously affect the recommender system quality. As a result, most of traditional recommender system approaches are not able to deal with the users who have rated few items, which is known as cold start problem in recommender system. 2) Traditional recommender systems assume that users are independently and identically distributed and ignore the social relation between users. However, in real life scenario, due to the exponential growth of social networking service, such as facebook and Twitter, social connections between different users play an significant role for recommender system task. In this work, aiming at providing a better recommender systems by incorporating user social network information, we propose a matrix factorization framework with user social connection constraints. Experimental results on the real-life dataset shows that the proposed method performs significantly better than the state-of-the-art approaches in terms of MAE and RMSE, especially for the cold start users. 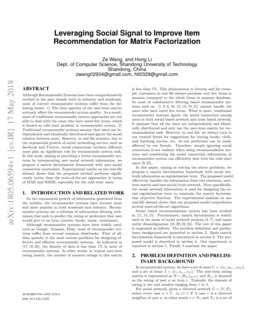 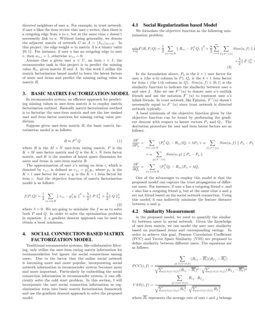 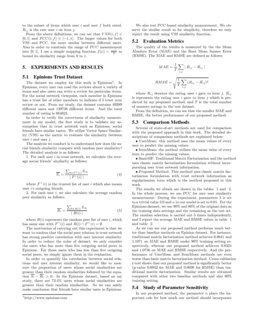 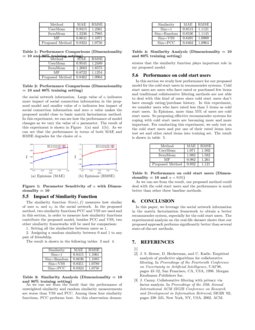 Although recommender systems have been widely used, such as Google, Amazon, Ebay, most of recommender systems suffer from several common drawbacks. First of all, data sparsity is the most serious problems for designing effective and efficient recommender systems. As indicated in  [17, 23, 18], the density of data is less than 1% in most of recommender systems. In other words, in typical user-item rating matrix, the number of nonzero ratings in this matrix is less than 1%. This phenomenon is obvious and for example, customers in real life always purchase very few items in amazon compared to the whole items in amazon database. So most of collaborative filtering based recommender systems such as  [1, 2, 3, 8, 10, 13, 12, 19, 21] cannot handle the users who have rated few items. What is more, traditional recommender systems ignore the social connection among users in both social based network and trust based network. It assumes that all the users are independently and identically distributed and only use the user-item matrix for recommendation task. However, in real life, we always turn to our trusted friend for suggestions for buying books, cloth, and watching movies, etc. So our preference can be easily affected by our friends. Therefore, simply ignoring social connection is not realistic when doing recommendation systems and considering the social connection information in recommender system can efficiently deal with the cold start users [25, 9].

In this paper, aiming at solving the above problems, we propose a matrix factorization framework with social network information as regularization term. The proposed model effectively handles the information from two resources, user-item matrix and user social/trust network. More specifically, the social network information is used for designing the social regularization term to constrain the matrix factorization objective function. The experimental analysis on one real-life dataset shows that our proposed model outperforms several state-of-the-art algorithms.

Social based recommendation system has been studied in [15, 14, 11]. Furthermore, matrix factorization is widely used in the areas of social network analysis [6, 7, 5, 4], and name entity disambiguation [16, 24, 20, 22]. The rest of this paper is organized as follows: The problem definition and preliminary background are presented in section 2. Basic matrix factorization framework is introduced in section 3. The proposed model is described in section 4. Our experiment is reported in section 5. Finally I conclude the paper.

In recommender system, we have a set of users U={u1,u2,...uM}, and a set of items I={i1,i2,...iN}. The user-item rating matrix is represented as R=[Rui]M×N and Rui is denoted as the rating of user u on item i. Typically the domain of rating is the real number ranging from 1 to 5.

For social network, given a directed network G=(V,E), wehre every user u∈V, (u,v)∈E if user v is a directed neighbor of user u, in other words v∈Nu and Nu is a set of directed neighbors of user u. For example, in trust network, if user u likes the item review that user v writes, then there is a outgoing edge from u to v, but at the same time v doesn’t necessarily link to u. Without losing generality, we denote the adjacent matrix of network G as A=[Auv]M×M. In this project, the edge weight w in matrix A is a binary value {0,1}. For instance, if user u has an outgoing edge to user v, then wuv=1, otherwise wuv=0.

Assume that a given user u∈U, an item i∈I, the recommender task in this project is to predict the missing value Rui given matrix R and A. In this work I utilize the matrix factorization based model to learn the latent factors of users and items and predict the missing rating value in matrix R.

Suppose given user-item matrix R, the basic matrix factorization model is as follows:

where R is the M×N user-item rating matrix, P is the K×M user factor matrix and Q is the K×N item factor matrix, and K is the number of latent space dimension for users and items in user-item matrix R.

The approximation of user u’s rating on item i, which is denoted by rui, is defined as rui=pTuqi, where pu is the K×1 user factor for user u, qi is the K×1 item factor for item i. And the objective function of matrix factorization model is as follows:

where λ>0. We are going to minimize the f so as to solve both P and Q. In order to solve the optimization problem in equation  2, a gradient descent approach can be used to obtain a local minimum.

We formulate the objective function as the following minimization problem:

In the formulation above, Pu is the k×1 user factor for user u (the u-th column in P), Qi is the k×1 item factor for item i (the i-th column in Q). Sim(u,f)∈[0,1] is the similarity function to indicate the similarity between user u and user f. Also we use F+(u) to denote user u’s outlink friends and use the notation F−(u) to represent user u’s inlink friends. In trust network, like Epinion, F+(u) doesn’t necessarily equal to F−(u) since trust network is directed network typically.

Pu and Qi. The derivation procedure for user and item latent factors are as follows:

One of the advantages to employ this model is that the proposed model can capture the trust propagation of different users. For instance, if user u has a outgoing friend v, and v also has a outgoing friend g, but at the same time u and g are not friend based on the social network connection. Using this model, it can indirectly minimize the feature distance between u and g.

in the proposed model, we need to quantify the similarity between users in social network. Given the knowledge of user-item matrix, we can model the user user similarity based on purchased items and corresponding ratings. In order to achieve this goal, Pearson Correlation Coefficient (PCC) and Vector Space Similarity (VSS) are proposed to define similarity between different users. The equations are as follows:

where ¯¯¯¯¯¯Ri represents the average rate of user i and j belongs to the subset of items which user i and user f both rated. Rij is the rate user i on item j.

From the above definitions, we can see that VSS(i,f)∈[0,1] and PCC(i,f)∈[−1,1]. The larger values for both VSS and PCC, the more similar between different users. Also in order to constrain the range of PCC measurement into [0,1], I use a simple mapping function f(x)=x+12 to bound its similarity range from 0 to 1.

The dataset we employ for this work is Epinions111http://www.epinions.com. In Epinions, every user can read the reviews about a variety of items and also users can write a review for particular items. For the social network viewpoint, each member in Epinions has a trust list of other members to indicate if I trust your review or not. From my study, the dataset contains 49289 different users and 139738 different items. And the total number of rating is 664824.

In order to verify the correctness of similarity measurement in my model, the first study is to validate my assumption that in trust network such as Epinions, social friends have similar tastes. We utilize Vector Space Similarity (VSS) as the metric to evaluate the similarity between user i and user j.

The analysis we conduct is to understand how does the social friends similarity compare with random peer similarity? The detailed analysis is as follows:

1. For each user i in trust network, we calculate the average social friends’ similarity as follows:

where F+(i) is the trusted list of user i which also means user i’s outgoing friends.

2. For each user i, we also calculate the average random peer similarity as follows:

where R(i) represents the random peer list of user i, which has same size with F+(i) and R(i)∩F+(i)=∅.

We also test PCC based similarity measurement. We observe the similar result so for simplicity, therefore we only report the result using VSS similarity function.

The quality of the results is measured by the the Mean Absolute Error (MAE) and the Root Mean Square Error (RMSE). The MAE and RMSE are defined as follows:

From the definition, we can see that the smaller MAE and RMSE, the better performance of our proposed method.

Several of state-of-art methods are used for comparison with the proposed approach in this work. The detailed descriptions of comparison methods are explained below:

∙ UserMean: this method uses the mean values of every user to predict the missing values

∙ ItemMean: the method utilizes the mean value of every item to predict the missing values.

∙ Proposed Method: This method uses classic matrix factorization formulation with trust network information as regularization term which is the method proposed in this work.

The results we obtain are shown in the tables  1 and  2. In the whole process, we use PCC for user user similarity measurement. During the experiment, parameters λ is set to a trivial value 3.0 and α in our model is set to 0.01. For the Epinions dataset, we use 90% and 80% of the original data as the training data settings and the remaining as the test set. The random selection is carried out 5 times independently, and I report the average MAE and RMSE values in table  1 and table  2.

on MAE and RMSE respectively. And the performance of UserMean and ItemMean methods are even worse than basic matrix factorization method. Cross-validation t-test shows that our proposed method is significantly better (p-value 0.0042 for MAE and 0.0036 for RMSE) than traditional matrix factorization. Similar results are obtained compared with other two baseline methods and also

In our proposed method, the parameter α plays the important role for how much our method should incorporate the social network information. Large value of α indicates more impact of social connection information in the propsoed model and smaller value of α indicates less impact of social connection information and zero α value makes the proposed model close to basic matrix factorizaton method. In this experiment, we can see how the performance of model changes as we vary the value of α parameter. The result of this experiment is shown in Figure  1(a) and  1(b). As we can see that the performance in terms of both MAE and RMSE degrades for the choice of α.

1. Setting all the similarities between users as 1.

2. Assigning a random similarity between 0 and 1 to any pair of friendship.

The result is shown in the following tables  3 and  4.

As we can see from the result, our proposed method could deal with the cold start users and the performance is much better than other three baseline methods.

In this paper, we leverage the social network information in the matrix factorization framework to obtain a better recommender system, especially for the cold start users. The experimental analysis on the real-life dataset shows that our proposed approach performs significantly better than several state-of-the-art methods.