We propose a novel method for generating natural language sentences from probabilistic language models, selecting from a beam search using a range voting procedure. The proposed method could be applied to any language model, including both n-gram models and neural network models, and could be applied to any generation task. Instead of choosing the most likely output, our method chooses the most representative output, providing a solution to the common problem of short outputs being preferred over longer and more informative ones. We evaluate our method on an image captioning task, and find that the generated captions are longer and more diverse than those generated using standard beam search, with higher BLEU scores (particularly when the beam size is large), and better performance in a human evaluation. 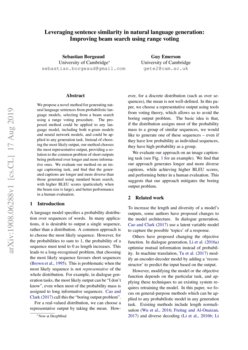 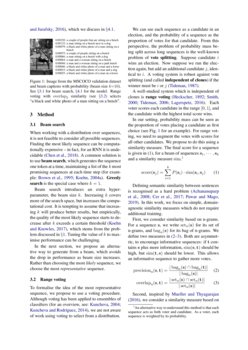 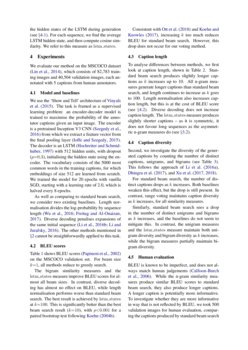 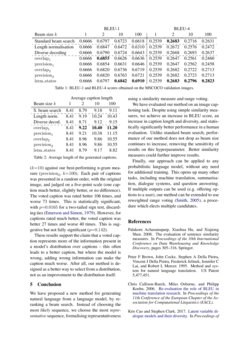 On Hallucination and Predictive Uncertainty in Conditional Language Generation

The use of language models for generating lyrics and poetry has received...
Pablo Samuel Castro, et al. ∙

A language model specifies a probability distribution over sequences of words. In many applications, it is desirable to output a single sequence, rather than a distribution. A common approach is to choose the most likely sequence. However, for the probabilities to sum to 1, the probability of a sequence must tend to 0 as length increases. This leads to a long-recognised problem, that choosing the most likely sequence favours short sequences

(Brown et al., 1995). This is problematic when the most likely sequence is not representative of the whole distribution. For example, in dialogue generation tasks, the most likely output can be “I don’t know”, even when most of the probability mass is assigned to long informative sequences. Cao and Clark (2017) call this the “boring output problem”.

For a real-valued distribution, we can choose a representative output by taking the mean. However, for a discrete distribution (such as over sequences), the mean is not well-defined. In this paper, we choose a representative output using tools from voting theory, which allows us to avoid the boring output problem. The basic idea is that, if the distribution assigns most of the probability mass to a group of similar sequences, we would like to generate one of these sequences – even if they have low probability as individual sequences, they have high probability as a group.

We evaluate our approach on an image captioning task (see Fig. 1 for an example). We find that our approach generates longer and more diverse captions, while achieving higher BLEU scores, and performing better in a human evaluation. This suggests that our approach mitigates the boring output problem.

To increase the length and diversity of a model’s outputs, some authors have proposed changes to the model architecture. In dialogue generation, Cao and Clark (2017) use a latent variable model to capture the possible ‘topics’ of a response.

Others have proposed changing the objective function. In dialogue generation, Li et al. (2016a) optimise mutual information instead of probability. In machine translation, Tu et al. (2017) modify an encoder-decoder model by adding a ‘reconstructor’ to predict the input based on the output.

However, modifying the model or the objective function depends on the particular task, and applying these techniques to an existing system requires retraining the model. In this paper, we focus on general-purpose methods which can be applied to any probabilistic model in any generation task. Existing methods include length normalisation (Wu et al., 2016; Freitag and Al-Onaizan, 2017) and diverse decoding (Li et al., 2016b; Li and Jurafsky, 2016), which we discuss in §4.1.

When working with a distribution over sequences, it is not feasible to consider all possible sequences. Finding the most likely sequence can be computationally expensive – in fact, for an RNN it is undecidable (Chen et al., 2018). A common solution is to use beam search, which generates the sequence one token at a time, maintaining a list of the k most promising sequences at each time step (for example: Brown et al., 1995; Koehn, 2004a). Greedy search is the special case where k=1.

Beam search introduces an extra hyper-parameter, the beam size k. Increasing k covers more of the search space, but increases the computational cost. It is tempting to assume that increasing k will produce better results, but empirically, the quality of the most likely sequence starts to decrease after k exceeds a certain threshold (Koehn and Knowles, 2017), which stems from the problem discussed in §1. Tuning the value of k to maximise performance can be challenging.

In the next section, we propose an alternative way to generate from a beam, which avoids the drop in performance as beam size increases. Rather than choosing the most likely sequence, we choose the most representative sequence.

To formalise the idea of the most representative sequence, we propose to use a voting procedure. Although voting has been applied to ensembles of classifiers (for an overview, see:

Kuncheva, 2004; Kuncheva and Rodríguez, 2014), we are not aware of work using voting to select from a distribution.

We can see each sequence as a candidate in an election, and the probability of a sequence as the proportion of votes for that candidate. From this perspective, the problem of probability mass being split across long sequences is the well-known problem of vote splitting. Suppose candidate i wins an election. Now suppose we run the election again, but add an additional candidate j, identical to i. A voting system is robust against vote splitting (and called independent of clones) if the winner must be i or j (Tideman, 1987).

A well-studied system which is independent of clones is range voting (Heckscher, 1892; Smith, 2000; Tideman, 2006; Lagerspetz, 2016). Each voter scores each candidate in the range [0,1], and the candidate with the highest total score wins.

In our setting, probability mass can be seen as the proportion of votes placing a candidate as first choice (see Fig. 1 for an example). For range voting, we need to augment the votes with scores for all other candidates. We propose to do this using a similarity measure. The final score for a sequence is given in (1), for a beam of sequences s1,⋯,sk and a similarity measure sim.111An alternative way to understand this method is that each sequence acts as both voter and candidate. As a voter, each sequence is weighted by its probability.

Defining semantic similarity between sentences is recognised as a hard problem (Achananuparp et al., 2008; Cer et al., 2017; Pawar and Mago, 2019). In this work, we focus on simple, domain-agnostic similarity measures which do not require additional training.

First, we consider similarity based on n-grams. For a sequence s, we write setn(s) for its set of n-grams, and bagn(s) for its bag of n-grams. We define two measures in (2–3). Both are asymmetric, to encourage informative sequences: if t contains s plus more information, sim(s,t) should be high, but sim(t,s) should be lower. This allows an informative sequence to gather more votes.

Second, inspired by Mueller and Thyagarajan (2016), we consider a similarity measure based on the hidden states of the LSTM during generation (see §4.1

). For each sequence, we find the average LSTM hidden state, and then compute cosine similarity. We refer to this measure as

We evaluate our method on the MSCOCO dataset (Lin et al., 2014), which consists of 82,783 training images and 40,504 validation images, each annotated with 5 captions from human annotators.

. The task is framed as a supervised learning problem: an encoder-decoder model is trained to maximise the probability of the annotator captions given an input image. The encoder is a pretrained Inception V3 CNN

), initialising the hidden state using the encoder. The vocabulary consists of the 5000 most common words in the training captions, for which embeddings of size 512 are learned from scratch. We trained the model for 20 epochs with vanilla SGD, starting with a learning rate of 2.0, which is halved every 8 epochs.

As well as comparing to standard beam search, we consider two existing baselines. Length normalisation divides the log-probability by sequence length (Wu et al., 2016; Freitag and Al-Onaizan, 2017). Diverse decoding penalises expansions of the same initial sequence (Li et al., 2016b; Li and Jurafsky, 2016). The other methods mentioned in §2 cannot be straightforwardly applied to this task.

The bigram similarity measures and the lstm_states measure improve BLEU scores for almost all beam sizes. In contrast, diverse decoding has almost no effect on BLEU, while length normalisation performs worse than standard beam search. The best result is achieved by lstm_states at k=100. This is significantly better than the best beam search result (k=10), with p<0.001 for a paired bootstrap test following Koehn (2004b).

Consistent with Ott et al. (2018) and Koehn and Knowles (2017), increasing k too much reduces BLEU for standard beam search. However, this drop does not occur for our voting method.

To analyse differences between methods, we first look at caption length, shown in Table 2. Standard beam search produces slightly longer captions as k increases up to 10. All n-gram measures generate longer captions than standard beam search, and length continues to increase as k goes to 100. Length normalisation also increases caption length, but this is at the cost of BLEU score (see §4.2). Diverse decoding does not increase caption length. The lstm_states measure produces slightly shorter captions – as it is symmetric, it does not favour long sequences as the asymmetric n-gram measures do (see §3.2).

For standard beam search, the number of distinct captions drops as k increases. Both baselines weaken this effect, but the drop is still present. In contrast, range voting maintains caption diversity as k increases, for all similarity measures.

BLEU is known to be imperfect, and does not always match human judgements (Callison-Burch et al., 2006). While the n-gram similarity measures produce similar BLEU scores to standard beam search, they also produce longer captions. A longer caption is potentially more informative. To investigate whether they are more informative in way that is not reflected by BLEU, we took 500 validation images for human evaluation, comparing the captions produced by standard beam search (k=10) against our best-performing n-gram measure (precision2, k=100). Each pair of captions was presented in a random order, with the original image, and judged on a five-point scale (one caption much better, slightly better, or no difference). The voted caption was rated better 106 times, and worse 73 times. This is statistically significant, with p=0.0165 for a two-tailed sign test, discarding ties (Emerson and Simon, 1979). However, for captions rated much better, the voted caption was better 27 times and worse 40 times. This is suggestive but not fully significant (p=0.142).

These results support the claim that a voted caption represents more of the information present in a model’s distribution over captions – this often leads to a better caption, but where the model is wrong, adding wrong information can make the caption much worse. After all, our method is designed as a better way to select from a distribution, not as an improvement to the distribution itself.

We have proposed a new method for generating natural language from a language model, by re-ranking a beam search. Instead of choosing the most likely sequence, we choose the most representative sequence, formalising representativeness using a similarity measure and range voting.

We have evaluated our method on an image captioning task. Despite using simple similarity measures, we achieve an increase in BLEU score, an increase in caption length and diversity, and statistically significantly better performance in a human evaluation. Unlike standard beam search, performance of our method does not drop as beam size continues to increase, removing the sensitivity of results on this hyperparameter. Better similarity measures could further improve results.

Finally, our approach can be applied to any probabilistic language model, without any need for additional training. This opens up many other tasks, including machine translation, summarisation, dialogue systems, and question answering. If multiple outputs can be used (e.g. offering options to a user), our method can be extended to use reweighted range voting (Smith, 2005), a procedure which elects multiple candidates.