Predicting facial attributes from faces in the wild is very challenging due to pose and lighting variations in the real world. The key to this problem is to build proper feature representations to cope with these unfavourable conditions. Given the success of Convolutional Neural Network (CNN) in image classification, the high-level CNN feature, as an intuitive and reasonable choice, has been widely utilized for this problem. In this paper, however, we consider the mid-level CNN features as an alternative to the high-level ones for attribute prediction. This is based on the observation that face attributes are different: some of them are locally oriented while others are globally defined. Our investigations reveal that the mid-level deep representations outperform the prediction accuracy achieved by the (fine-tuned) high-level abstractions. We empirically demonstrate that the midlevel representations achieve state-of-the-art prediction performance on CelebA and LFWA datasets. Our investigations also show that by utilizing the mid-level representations one can employ a single deep network to achieve both face recognition and attribute prediction. 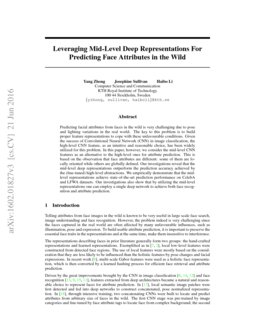 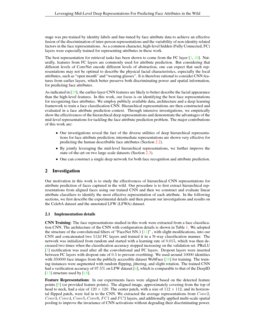 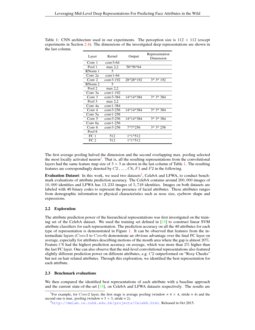 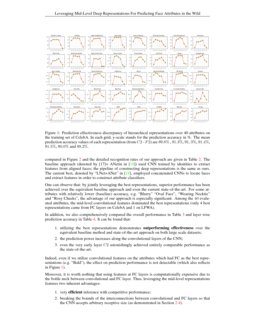 The 3D shapes of faces are well known to be discriminative. Yet despite ...
Anh Tuan Tran, et al. ∙

Telling attributes from face images in the wild is known to be very useful in large scale face search, image understanding and face recognition. However, the problem indeed is very challenging since the faces captured in the real world are often affected by many unfavourable influences, such as illumination, pose and expression. To build usable attribute prediction, it is important to preserve the essential face traits in the representations and at the same time, make them insensitive to interference.

The representations describing faces in prior literature generally form two groups: the hand-crafted representations and learned representations. Exemplified as in [7, 2], local low-level features were constructed from detected face regions. The use of local features were mostly based on the consideration that they are less likely to be influenced than the holistic features by pose changes and facial expressions. In recent work [8], multi-scale Gabor features were used as a holistic face representation, which is then converted by a learned hashing process for efficient face retrieval and attribute prediction.

, features extracted from deep architectures became a natural and reasonable choice to represent faces for attribute prediction. In

[17], local semantic image patches were first detected and fed into deep networks to construct concatenated, pose normalized representation. In [18], through intensive training, two concatenating CNNs were built to locate and predict attributes from arbitrary size of faces in the wild. The first CNN stage was pre-trained by image categories and fine-tuned by face attribute tags to locate face from complex background; the second stage was pre-trained by identity labels and fine-tuned by face attribute data to achieve an effective fusion of the discrimination of inter-person representations and the variability of non-identity related factors in the face representations. As a common character, high-level hidden (Fully Connected, FC) layers were especially trained for representing attributes in these work.

The best representation for retrieval tasks has been shown to come from the FC layer [1, 10]. Naturally, features from FC layers are commonly used for attribute prediction. But considering that different levels of ConvNet encode different levels of abstraction, one can expect that such representations may not be optimal to describe the physical facial characteristics, especially the local attributes, such as “open mouth” and “wearing glasses”. It is therefore rational to consider CNN features from earlier layers, which better preserve both discriminating power and spatial information, for predicting face attributes.

Our motivation in this work is to study the effectiveness of hierarchical CNN representations for attribute prediction of faces captured in the wild. Our procedure is to first extract hierarchical representations from aligned faces using our trained CNN and then we construct and evaluate linear attribute classifiers to identify the most effective representation of each attribute. In the following sections, we first describe the experimental details and then present our investigations and results on the CelebA dataset and the annotated LFW (LFWA) dataset.

CNN Training: The face representations studied in this work were extracted from a face classification CNN. The architecture of the CNN with configuration details is shown in Table 1. We adopted the structure of the convolutional filters of “FaceNet NN.1 [11]” , with slight modifications, into our CNN and concatenated two 512d FC layers and trained it in a N-way classification manner. The network was initialized from random and started with a learning rate of 0.015, which was then decreased two times when the classification accuracy stopped increasing on the validation set. PReLU [3] rectification was used after all the convolutional and FC layers. Dropout layers were inserted between FC layers with dropout rate of 0.5 to prevent overfitting. We used around 10000 identities with 350000 face images from the publicly accessible dataset WebFace [16] for training. The training instances were augmented with random flipping, jittering, and slight rotation. The trained CNN had a verification accuracy of 97.5% on LFW dataset [4], which is comparable to that of the DeepID [13] structure used by [18].

Feature Representations: In our experiments faces were aligned based on the detected feature points [5] (or provided feature points). The aligned image, approximately covering from the top of head to neck, had a size of 120×120. The center patch, with a size of 112×112, and its horizontal flipped patch, were fed in to the CNN. We extracted the average representations from Conv2, Conv3, Conv4, Conv5, Conv6, FC1 and FC2

layers, and additionally applied multi-scale spatial pooling to improve the invariance of CNN activations without degrading their discriminating power. The first average pooling halved the dimension and the second overlapping max. pooling selected the most locally activated neuron

111For example, for Conv2 layer, the first stage is average pooling (window = 4 ×

× 3, stride = 2).. That is, all the resulting representations from the convolutional layers had the same feature map size of 3 × 3 as shown in the last column of Table 1. The resulting features are correspondingly denoted by C2 , … , C6, F1 and F2 in the following.

Evaluation Dataset: In this work, we used two datasets222http://mmlab.ie.cuhk.edu.hk/projects/CelebA.html. Released in Oct 2015., CelebA and LFWA, to conduct benchmark evaluations of attribute prediction accuracy. The CelebA contains around 200,000 images of 10,000 identities and LFWA has 13,233 images of 5,749 identities. Images on both datasets are labeled with 40 binary codes to represent the presence of facial attributes. These attributes ranges from demographic information to physical characteristics such as nose size, eyebrow shape and expressions.

The attribute prediction power of the hierarchical representations was first investigated on the training set of the CelebA dataset. We used the training set defined in [18] to construct linear SVM attribute classifiers for each representation. The prediction accuracy on all the 40 attributes for each type of representation is demonstrated in Figure 1. It can be observed that features from the intermediate layers (Conv3 to Conv6) demonstrate an obvious advantage over the final FC layer on average, especially for attributes describing motions of the mouth area where the gap is almost 20%. Feature C6 had the highest prediction accuracy on average, which was more than 2% higher than the last FC layer. One can also observe that the mid-level convolutional representations also featured slightly different prediction power on different attributes, e.g. C2 outperformed on “Rosy Cheeks” but not on hair related attributes. Through this exploration, we identified the best representation for each attribute.

We then compared the identified best representations of each attribute with a baseline approach and the current state-of-the-art [18], on CelebA and LFWA datasets respectively. The results are compared in Figure 2 and the detailed recognition rates of our approach are given in Table 2. The baseline approach (denoted by [17]+ ANetin in [18]) used CNN trained by identities to extract features from aligned faces; the pipeline of constructing deep representations is the same as ours. The current best, denoted by “LNet+ANet” in [18], employed concatenated CNNs to locate faces and extract features in order to construct attribute classifiers.

One can observe that: by jointly leveraging the best representations, superior performance has been achieved over the equivalent baseline approach and even the current state-of-the-art. For some attributes with relatively lower (baseline) accuracy, e.g. “Blurry” “Oval Face”, “Wearing Necktie” and “Rosy Cheeks”, the advantage of our approach is especially significant. Among the 40 evaluated attributes, the mid-level convolutional features dominated the best representations (only 4 best representations came from FC layers on CelebA and 1 on LFWA).

In addition, we also comprehensively compared the overall performance in Table 3 and layer wise prediction accuracy in Table 4. It can be found that:

Indeed, even if we utilize convolutional features on the attributes which had FC as the best representations (e.g. “Bald”), the effect on prediction performance is not detectable (which also reflects in Figure 1).

Moreover, it is worth nothing that using features at FC layers is computationally expensive due to the bottle neck between convolutional and FC layer. Thus, leveraging the mid-level representations features two inherent advantages:

Recall that the training effort of a face classification CNN is almost minimal compared to state-of-the-art two-stage CNN approach and other potential end-to-end learning for attribute prediction. However, the deep hierarchical representations from the trained face classification CNN still allow superior performance. This indicates that these mid-level CNN representations have contained rich spatial information which can be utilized more in building effective (local) appearances description, attribute prediction and retrieval applications.

It is easy to expect that a number of factors, e.g. image resolution, could affect the face attribute prediction performance. A small receptive size would affect the prediction relating to small scale face traits. We found that by doubling the input size of our CNN the prediction accuracy for “Bag under eyes” increased from 82.2% to 83.5% with C3 as the best representation.

Similarly, attributes that are related to the face components with deterministic distribution can have condensed representations. For instance, “arched eyebrow” always appears in the upper part of face images and “wearing necktie” appears in the lower part. We studied the condensed C6 feature (3×2×256) as the representation for locally related attributes and found that the average prediction accuracy remained almost the same (89.3%). This means that we can further reduce the memory footprint of the representations and the classifiers for the attributes defined by deterministic facial components.

Our investigations indicate that CNNs trained for face classification have implicitly learned many semantic concepts and human describable attributes have been embedded in the mid-level deep representations, which can be separated by simple classifiers. They also reveal the potential utility of the intermediate deep representations for other face related tasks. These findings promise to increase the face attribute prediction performance and to achieve multiple intelligent functions, such as face recognition, retrieval and attribute prediction, in one single deep architecture.