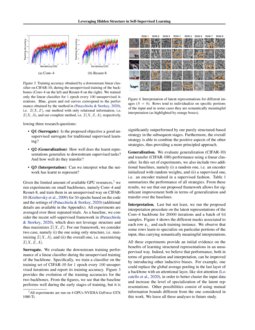 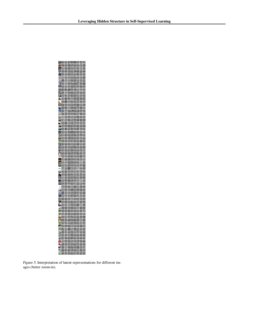 Self-supervised feature representations have been shown to be useful for...
Isabela Albuquerque, et al. ∙

Pouring is one of the most commonly executed tasks in humans' daily live...
Yongqiang Huang, et al. ∙

The contributions consist of (i) a new self-supervised framework, which leverages the hidden structure contained in the data and (ii) a learning procedure to interpret the meaning of the learnt representations.

Let us consider an input tensor

x∈RH×W×C, a latent tensor z∈RS×D, obtained by the transformation of x using an encoding function gθ:RH×W×C→RS⋅D and a reshaping operator, and a latent structure tensor a∈{0,1}S×S×K, obtained by the transformation of x using function hγ:RH×W×C→{0,1}S×S×K. For example, x can be an observed image, z contains the representations of S entities in the image and a represents the relations among these S entities.111K stands for the relation type, including the case of no relation between two entities. We experimented only with K=2.

If we define the random vectors/tensors

X,Z,A, associated to x,z and a, respectively, we can define the generalized mutual information over these random quantities (equivalently the total correlation of X,Z,A):

is the Kullback-Leibler divergence and

are the joint probability and the marginal densities of the random quantities, respectively.

Now, let us assume that Z and A are conditionally independent given X. Note that this is quite reasonable in practice. For example, if we consider an image containing a set of objects and a set of relations (e.g. right/left of, above/beyond, smaller/bigger), these two sets exist independently from each other and are instantiated through z and a by the observed scene. Thanks to this assumption, Eq. 1 simplifies into the following form (see the Appendix for the derivation):

Now, we are ready to provide an estimator for the quantity in Eq. 2, by using existing variational bounds (Barber & Agakov, 2004). Specifically, we focus on the bound proposed in (Nguyen et al., 2010) for its tractability and unbiasedness, thus obtaining the following criterion (see the Appendix for the derivation):

Therefore, the learning problem consists of a maximization of the lower bound in Eq. 3 with respect to parameters β and ω. During training the encoder learns to structure the representation guided by the two critic functions to improve not only the mutual information between X and Z but also the mutual information between X and A. In effect, this is an inductive bias towards learning more structured representations.

From Figure 1 we can see that the encoder gθ provides a global representation of the data, which is subsequently splitted/reshaped to provide the latent tensor z. It’s interesting to understand the role of the rows of z once the network is trained, to test (i) whether the network learns to bind each row of z to a particular portion of the input and (ii) whether such portion corresponds to a particular entity of the scene.

To do so, we need to identify which entries of the input tensor (i.e. which pixels) mostly affect the different rows of z. Specifically, we introduce a soft-binary mask σ(ϕi) for each input sample and each row i of z, where σ is an element-wise standard logistic function and ϕi∈RH×W is the parameter tensor of the mask associated to a specific image and representation zi,:, and then multiply the mask with the associated input. The final problem consists of minimizing I(X,Zi,:) for i∈{1,…,S} with respect to the parameters of the mask ϕi.

Similarly to previous case, we need to consider a tractable estimator for the mutual information objective. Differently from previous case, we devise an upper bound to be consistent with the minimization problem (see the Appendix for the whole derivation), namely:

where qZi,:≐EpX{N(~zi,:|gθ(σ(ϕi)⊙x),I)}Z is an auxiliary distribution defined over the latent tensor representation, N(~zi,:|gθ(σ(ϕi)⊙x),I) is a multivariate Gaussian density with mean gθ and identity covariance matrix and c is a constant with respect to mask parameters. The bound in Eq. 4 becomes tight when qZi,: matches the true marginal pZi,:. It’s also interesting to mention that, in theory, the bound in Eq. 4 admits a trivial solution with all masks set to zero. However, in practice, we didn’t observe the convergence to such trivial solutions, probably due the highly nonlinearity of the minimization problem.

Figure 2 shows the building block of the minimization procedure. Once the strategy concludes, we can inspect the latent representations of the encoder by plotting the masks σ(ϕi) for each image and each latent vector zi,:, as discussed in the experimental section.

We organize the existing literature in terms of objectives, network architectures and data augmentations/pretext tasks.

Objectives. Mutual information is one of the most common criteria used in self-supervised learning (Linsker, 1988; Becker & Hinton, 1992). Estimating and optimizing mutual information from samples is notoriously difficult (McAllester & Stratos, 2020)

. All of these estimators have different properties in terms of bias-variance trade-off

(Tschannen et al., 2019; Song & Ermon, 2020). Our work generalizes over previous objectives based on mutual information, by considering structure as an additional latent variable. Indeed, we focus on learning a structured representation, which aims at better supporting downstream reasoning tasks and improving its interpretability. Therefore, our work is orthogonal to these previous studies, as different estimators can be potentially employed for this extended definition of mutual information.

as a way to avoid using negative samples, which are typically required by variational bound estimators. However, these objectives consider to learn distributed representations and disregard the notion of hidden structure, which is currently analyzed in this work.

Architectures. Graph neural networks are one of the most common architectures used in self-supervised learning on relational data (Kipf & Welling, 2016; Kipf et al., 2018; Davidson et al., 2018; Velickovic et al., 2019). While these works provide representations of the underlying graph data, thus supporting downstream tasks like graph/node classification and link prediction/graph completion, they typically assume that node/entities/symbols are known a priori. This work relaxes this assumption and devises a criterion able to integrate traditional representation learning with graph representation learning in a principled way.

The experiments are organized in a way to answer the following three research questions:

Given the limited amount of available GPU resources,222All experiments are run on 4 GPUs NVIDIA GeForce GTX 1080 Ti. we run experiments on small backbones, namely Conv-4 and Resnet-8, and train them in an unsupervised way on CIFAR-10 (Krizhevsky et al., 2009) for 50 epochs based on the code and the settings of (Patacchiola & Storkey, 2020) (additional details are available in the Appendix). All experiments are averaged over three repeated trials. As a baseline, we consider the recent self-supervised framework in (Patacchiola & Storkey, 2020), which does not leverage structure and thus maximizes I(X,Z). For our framework, we consider two case, namely (i) the one using only structure, i.e. maximizing I(X,A), and (ii) the overall one, i.e. maximizing I(X,Z,A).

Surrogate. We evaluate the downstream training performance of a linear classifier during the unsupervised training of the backbone. Specifically, we train a classifier on the training set of CIFAR-10 for 1 epoch every 100 unsupervised iterations and report its training accuracy. Figure 3 provides the evolution of the training accuracies for the two backbones. From the figures, we see that the baseline performs well during the early stages of training, but it is significantly outperformed by our purely structured-based strategy in the subsequent stages. Furthermore, the overall strategy is able to combine the positive aspects of the other strategies, thus providing a more principled approach.

Generalization. We evaluate generalization (CIFAR-10) and transfer (CIFAR-100) performance using a linear classifier. In this set of experiments, we also include two additional baselines, namely (i) a random one, i.e. an encoder initialized with random weights, and (ii) a supervised one, i.e. an encoder trained in a supervised fashion. Table 1 summarizes the performance of all strategies. From these results, we see that our proposed framework allows for significant improvement both in terms of generalization and transfer over the baselines.

Interpretation. Last but not least, we run the proposed interpretation procedure on the latent representations of the Conv-4 backbone for 20000 iterations and a batch of 64 samples. Figure 4 shows the different masks associated to each row zi,: and each training instance. We observe that some rows learn to specialize on particular portions of the input, thus carrying semantically meaningful interpretations.

All these experiments provide an initial evidence on the benefits of learning structured representations in an unsupervised way. Indeed, we believe that performance, both in terms of generalization and interpretation, can be improved by introducing other inductive biases. For example, one could replace the global average pooling in the last layer of a backbone with an attentional layer, like slot attention (Locatello et al., 2020), in order to better cluster the input data and increase the level of specialization of the latent representations. Other possibilities consist of using mutual information bounds different from the one considered in this work. We leave all these analyses to future study.

This research was partially supported by TAILOR, a project funded by EU Horizon 2020 research and innovation programme under GA No 952215.

Appendix B Derivation of Lower Bound

We recall the derivation of the lower bound only for the term I(X,Z), as the other one can be obtained by applying the same methodology.

where qX|Z is an auxiliary density. Now, if we consider qX|Z=pXeTβ(x,z)ZZ, we obtain that:

By exploiting the inequality logx≤xe for all x>0, we obtain that:

We use the graph neural network encoder proposed in (Kipf et al., 2018) and report some details for completeness.

where the first inequality is obtained by noting that −KL{pZi,:∥qZi,:}≤0, and the second one is based on Jensen’s inequality.

Appendix F Interpretations for the Whole Batch of Samples