Lehmer Transform and its Theoretical Properties

We propose a new class of transforms that we call Lehmer Transform which is motivated by the Lehmer mean function. The proposed Lehmer transform decomposes a function of a sample into their constituting statistical moments. Theoretical properties of the proposed transform are presented. This transform could be very useful to provide an alternative method in analyzing non-stationary signals such as brain wave EEG. 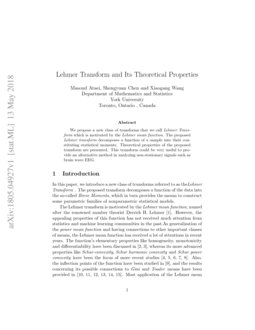 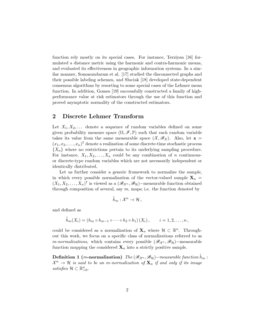 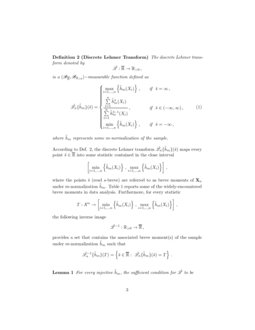 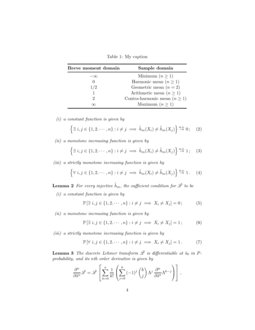 In this paper, we introduce a new class of transforms referred to as theLehmer Transform . The proposed transform decomposes a function of the data into the so-called Breve Moments, which in turn provides the means to construct some parametric families of nonparametric statistical models.

The Lehmer transform is motivated by the Lehmer mean function, named after the renowned number theorist Derrick H. Lehmer [1]

. However, the appealing properties of this function has not received much attention from statistics and machine learning communities in the past.As generalization of the

power mean function and having connections to other important classes of means, the Lehmer mean function has received a lot of attentions in recent years. The function’s elementary properties like homogeneity, monotonicity and differentiability have been discussed in [2, 3], whereas its more advanced properties like Schur-convexity, Schur harmonic convexity and Schur power convexity have been the focus of more recent studies [4, 5, 6, 7, 8]. Also, the inflection points of the function have been studied in [9], and the results concerning its possible connections to Gini and Toader means have been provided in [10, 11, 12, 13, 14, 15]. Most application of the Lehmer mean function rely mostly on its special cases. For instance, Terziyan [16]

formulated a distance metric using the harmonic and contra-harmonic means, and evaluated its effectiveness in geographic information systems. In a similar manner, Somasundaram et al.

[17] studied the disconnected graphs and their possible labeling schemes, and Sluciak [18] developed state-dependent consensus algorithms by resorting to some special cases of the Lehmer mean function. In addition, Gomes [19]

successfully constructed a family of high-performance value at risk estimators through the use of this function and proved asymptotic normality of the constructed estimators.

(Ω,F,P) such that each random variable takes its value from the same measurable space (X,BX). Also, let x=(x1,x2,…,xn)⊺ denote a realization of some discrete-time stochastic process {Xn} where no restrictions pertain to its underlying sampling procedure. For instance, X1,X2,…,Xn could be any combination of n continuous- or discrete-type random variables which are not necessarily independent or identically distributed.

Let us further consider a generic framework to normalize the sample, in which every possible normalization of the vector-valued sample

Xn=(X1,X2,…,Xn)⊺ is viewed as a (BXn,BH)−measurable function obtained through composition of several, say m, maps; i.e. the function denoted by

could be considered as a normalization of Xn where H⊂Rn. Throughout this work, we focus on a specific class of normalizations referred to as m-normalizations, which contains every possible (BXn,BH)−measurable function mapping the considered Xn into a strictly positive sample.

The (BXn,BH)−measurable function \lx@overaccentset∘hm:Xn→H is said to be an m-normalization of Xn if and only if its image satisfies H⊂Rn>0.

The discrete Lehmer transform denoted by

is a (B¯¯¯R,BR>0)−measurable function defined as

According to Def. 2, the discrete Lehmer transform ˘Ln{\lx@overaccentset∘hm}(˘s) maps every point ˘s∈¯¯¯¯R into some statistic contained in the close interval

where the points ˘s (read s-breve) are referred to as breve moments of Xn under m-normalization \lx@overaccentset∘hm. Table 1 reports some of the widely-encountered breve moments in data analysis. Furthermore, for every statistic

For every injective \lx@overaccentset∘hm, the sufficient condition for ˘L to be

For every injective \lx@overaccentset∘hm, the sufficient condition for ˘L to be

The discrete Lehmer transform ˘L is differentiable at ˘s0 in P-probability, and its nth order derivative is given by

For a sample Xn having a (strictly) monotone increasing ˘L, its discrete inverse Lehmer transform is a (BR>0,B¯¯¯R)−measurable function defined as

In a family F

of linear transformations of some (strictly) monotone increasing

there exists one and only one (B¯¯¯R,BR)− measurable function F(˘s)∈F that satisfies the condition for being a distribution.

is a distribution if

For every (strictly) monotone increasing ˘L, the following (B¯¯¯R,BR)−measurable function

is a distribution if and only if

. Then, a probability density function for the extended real-valued random variable

˘S could be derived using

there exists one and only one (B¯¯¯R,BR)−measurable function F(˘s)∈F that satisfies the condition for being a distribution.

is a distribution if

For every (strictly) monotone increasing ˘L, the following (B¯¯¯R,BR)−measurable function

is a distribution if and only if

Assume the discrete Lehmer transform of a sample Xn satisfies the conditions ˘L(∞)P→W0(αβ)αβ and ˘L(−∞)P→W0(0). Then, an extended real-valued random variable ˘S is said to follow a Breve distribution if its probability density function is given by

for every α∈(0,1] and β∈R>0. A Breve random variable having the probability density function () is denoted by ˘S∼Breve(˘s;α,β).

The extreme points of (15) satisfy the following relation

for some constants C1 and C2 such that

Assume the discrete Lehmer transform of a sample Xn satisfies the conditions ˘L(∞)P→exp{W0(αβ)αβ} and ˘L(−∞)P→exp{W0(0)}. Then, an extended real-valued random variable ˘S is said to follow a Log-Breve distribution if its probability density function is given by

for every α∈(0,1] and β∈R>0. A Log-Breve random variable having the probability density function () is denoted by ˘S∼LogBreve(˘s;α,β).