In this paper, we propose Posterior Sampling Reinforcement Learning for Zero-sum Stochastic Games (PSRL-ZSG), the first online learning algorithm that achieves Bayesian regret bound of O(HS√(AT)) in the infinite-horizon zero-sum stochastic games with average-reward criterion. Here H is an upper bound on the span of the bias function, S is the number of states, A is the number of joint actions and T is the horizon. We consider the online setting where the opponent can not be controlled and can take any arbitrary time-adaptive history-dependent strategy. This improves the best existing regret bound of O(√(DS^2AT^2)) by Wei et. al., 2017 under the same assumption and matches the theoretical lower bound in A and T. 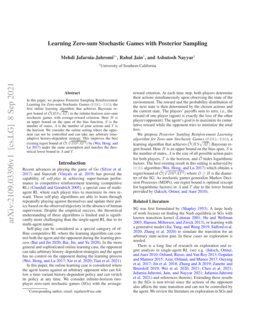 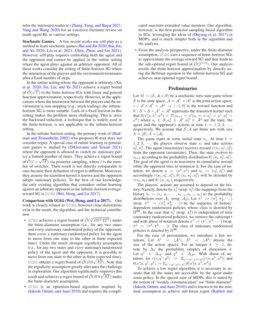 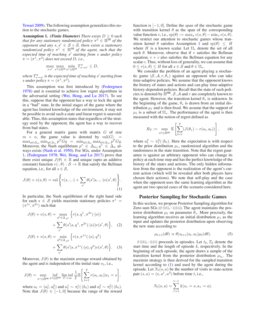 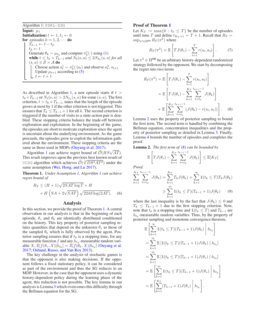 Recent advances in playing the game of Go Silver et al. (2017) and Starcraft Vinyals et al. (2019) has proved the capability of self-play in achieving super-human performance in competitive reinforcement learning (competitive RL) Crandall and Goodrich (2005), a special case of multi-agent RL where each player tries to maximize its own reward. These self-play algorithms are able to learn through repeatedly playing against themselves and update their policy based on the observed trajectory in the absence of human supervision. Despite the empirical success, the theoretical understanding of these algorithms is limited and is significantly more challenging than the single-agent RL due to its multi-agent nature.

In this paper, the online learning case is considered where the agent learns against an arbitrary opponent who can follow a time-variant history-dependent policy and can switch its policy at any time. We consider infinite-horizon two-player zero-sum stochastic games (SGs) with the average-reward criterion. At each time step, both players determine their actions simultaneously upon observing the state of the environment. The reward and the probability distribution of the next state is then determined by the chosen actions and the current state. The players’ payoffs sum to zero, i.e., the reward of one player (agent) is exactly the loss of the other player (opponent). The agent’s goal is to maximize its cumulative reward while the opponent tries to minimize the total loss.

We propose Posterior Samling Reinforcement Learning algorithm for Zero-sum Stochastic Games (PSRL-ZSG), a learning algorithm that achieves ˜O(HS√AT) Bayesian regret bound. Here H is an upper bound on the bias-span, S is the number of states, A is the size of all possible action pairs for both players, T is the horizon, and ˜O hides logarithmic factors. The best existing result in this setting is achieved by UCSG algorithm Wei et al. (2017) which obtains a regret bound of ˜O(3√DS2AT2) where D≥H

is the diameter of the SG. As stochastic games generalize Markov Decision Processes (MDPs), our regret bound is optimal (except for logarithmic factors) in

A few recent works use self-play as a method to learn stochastic games Bai and Jin (2020); Bai et al. (2020); Liu et al. (2021); Chen et al. (2021b). However, self-play requires controlling both the agent and the opponent and cannot be applied in the online setting where the agent plays against an arbitrary opponent. All of these works consider the setting of finite-horizon SG where the interaction of the players and the environment terminates after a fixed number of steps.

In the online setting where the opponent is arbitrary, Xie et al. (2020); Jin et al. (2021) achieve a regret bound of ˜O(√T) in the finite-horizon SGs with linear and general function approximation, respectively. However, in the applications where the interaction between the players and the environment is non-stopping (e.g., stock trading), the infinite-horizon SG is more suitable. Lack of a fixed horizon in this setting makes the problem more challenging. This is since the backward induction, a technique that is widely used in the finite-horizon, is not applicable in the infinite-horizon setting.

In the infinite-horizon setting, the primary work of Brafman and Tennenholtz (2002) who proposes R-max does not consider regret. A special case of online learning in general-sum games is studied by DiGiovanni and Tewari (2021) where the opponent is allowed to switch its stationary policy a limited number of times. They achieve a regret bound of ˜O(ℓ+√ℓT) via posterior sampling, where ℓ is the number of switches. Their result is not directly comparable to ours because their definition of regret is different. Moreover, they assume the transition kernel is known and the opponent adopts stationary policies. To the best of our knowledge, the only existing algorithm that considers online learning against an arbitrary opponent in the infinite-horizon average-reward SG is UCSG Wei et al. (2017).

Our work is closely related to UCSG, however clear distinctions exist in the result, the algorithm, and the technical contribution:

The game starts at some initial state s1. At time t=1,2,3,⋯, the players observe state st and take actions a1t,a2t. The agent (maximizer) receives reward r(st,a1t,a2t) from the opponent (minimizer). Then, the state evolves to st+1

according to the probability distribution

To achieve a low regret algorithm, it is necessary to assume that all the states are accessible by the agent under some policy. In the special case of MDPs, this is stated by the notion of “weakly communication” (or “finite diameter” Jaksch et al. (2010)) and is known to be the minimal assumption to achieve sub-linear regret Bartlett and Tewari (2009). The following assumption generalizes this notion to the stochastic games.

This assumption was first introduced by Federgruen (1978) and is essential to achieve low regret algorithms in the adversarial setting Wei et al. (2017). To see this, suppose that the opponent has a way to lock the agent in a “bad” state. In the initial stages of the game where the agent has limited knowledge of the environment, it may not be possible to avoid such a state and linear regret is unavoidable. Thus, this assumption states that regardless of the strategy used by the opponent, the agent has a way to recover from bad states.

For a general matrix game with matrix G of size m×n, the game value is denoted by val(G)=maxp∈Δmminq∈ΔnpTGq=minq∈Δnmaxp∈ΔmpTGq. Moreover, the Nash equilibrium p∗∈Δm,q∗∈Δn always exists Nash and others (1950). For SGs, under Assumption 1, Federgruen (1978); Wei et al. (2017) prove that there exist unique J(θ)∈R and unique (upto an additive constant) function v(⋅,θ):S→R that satisfy the Bellman equation, i.e., for all s∈S,

In particular, the Nash equilibrium of the right hand side for each s∈S yields maximin stationary policies π∗=(π1∗,π2∗) such that

Moreover, J(θ) is the maximin average reward obtained by the agent and is independent of the initial state s1, i.e.,

where at=(a1t,a2t) and a1t∼π1t(⋅|ht) and a2t∼π2t(⋅|ht). Note that J(θ)∈[−1,0] because the range of the reward function is [−1,0]. Define the span of the stochastic game with transition kernel θ as the span of the corresponding value function v, i.e., sp(θ):=maxsv(s,θ)−minsv(s,θ). We restrict our attention to stochastic games whose transition kernel θ satisfies Assumption 1 and sp(θ)≤H where H is a known scalar. Let Ω∗ denote the set of all such θ. Moreover, observe that if v satisfies the Bellman equation, v+c also satisfies the Bellman equation for any scalar c. Thus, without loss of generality, we can assume that 0≤v(s,θ)≤H for all s∈S and θ∈Ω∗.

We consider the problem of an agent playing a stochastic game (S,A,r,θ∗) against an opponent who can take time-adaptive policies. We assume that the opponent knows the history of states and actions and can play time-adaptive history-dependent policies. Recall that the state of such policies is denoted by ΠHR. S,A and r are completely known to the agent. However, the transition kernel θ∗ is unknown. In the beginning of the game, θ∗ is drawn from an initial distribution μ1 and is then fixed. We assume that the support of μ1 is a subset of Ω∗. The performance of the agent is then measured with the notion of regret defined as

where a2t∼π2t(⋅|ht). Here the expectation is with respect to the prior distribution μ1, randomized algorithm and the randomness in the state transition. Note that the regret guarantee is against an arbitrary opponent who can change its policy at each time step and has the perfect knowledge of the history of the states and actions. The only hidden information from the opponent is the realization of the agent’s current action (which will be revealed after both players have chosen their actions). We note that self-play and the case when the opponent uses the same learning algorithm as the agent are two special cases of the scenario considered here.

PSRL-ZSG proceeds in episodes. Let tk,Tk denote the start time and the length of episode k, respectively. In the beginning of each episode, the agent draws a sample of the transition kernel from the posterior distribution μtk. The maximin strategy is then derived for the sampled transition kernel according to (1) and used by the agent during the episode. Let Nt(s,a) be the number of visits to state-action pair (s,a)=(s,a1,a2) before time t, i.e.,

As described in Algorithm 1, a new episode starts if t>tk+Tk−1 or Nt(s,a)>2Ntk(s,a) for some (s,a). The first criterion, t>tk+Tk−1, states that the length of the episode grows at most by 1 if the other criterion is not triggered. This ensures that Tk≤Tk−1+1 for all k. The second criterion is triggered if the number of visits to a state-action pair is doubled. These stopping criteria balance the trade-off between exploration and exploitation. In the beginning of the game, the episodes are short to motivate exploration since the agent is uncertain about the underlying environment. As the game proceeds, the episodes grow to exploit the information gathered about the environment. These stopping criteria are the same as those used in MDPs Ouyang et al. (2017).

Algorithm 1 can achieve regret bound of ˜O(HS√AT). This result improves upon the previous best known result of UCSG algorithm which achieves ˜O(3√DS2AT2) under the same assumption Wei et al. (2017).

Under Assumption 1, Algorithm 1 can achieve regret bound of

In this section, we provide the proof of Theorem 1. A central observation in our analysis is that in the beginning of each episode, θ∗ and θk are identically distributed conditioned on the history. This key property of posterior sampling relates quantities that depend on the unknown θ∗ to those of the sampled θk which is fully observed by the agent. Posterior sampling ensures that if tk is a stopping time, for any measurable function f and any htk

The key challenge in the analysis of stochastic games is that the opponent is also making decisions. If the opponent follows a fixed stationary policy, it can be considered as part of the environment and thus the SG reduces to an MDP. However, in the case that the opponent uses a dynamic history-dependent policy during the learning phase of the agent, this reduction is not possible. The key lemma in our analysis is Lemma 3 which overcomes this difficulty through the Bellman equation for the SG.

Let π2∈ΠHR be an arbitrary history-dependent randomized strategy followed by the opponent. We start by decomposing the regret into two terms

The first term of (8) can be bounded by

where the last inequality is by the fact that J(θk)≤0 and Tk≤Tk−1+1 due to the first stopping criterion. Now, note that tk is a stopping time and 1(tk≤T) and Tk−1 are htk-measurable random variables. Thus, by the property of posterior sampling and monotone convergence theorem,

Taking another expectation from both sides and using the tower property, we have

Replacing this in (Proof of Theorem 1) implies that

The second term of (8) can be bounded by

Adding and subtracting v(st+1,θk) to the right hand side and summing over time steps within episode k implies that

where the last inequality is by the fact that θk is chosen from the posterior distribution whose support is a subset of Ω∗. Substituting (11) in (10), summing over episodes, and taking expectation implies that

We proceed to bound the last term on the right hand side of the above inequality.

Substituting the inner sum of (12) with this upper bound implies

where the last inequality is by Cauchy-Schwarz and the last equality is by the fact that ∑s,aNT+1(s,a)=T. To bound the second term on the right hand side of (Proof of Theorem 1), we can write