Due to the non-smoothness of the Hinge loss in SVM, it is difficult to obtain a faster convergence rate with modern optimization algorithms. In this paper, we introduce two smooth Hinge losses ψ_G(α;σ) and ψ_M(α;σ) which are infinitely differentiable and converge to the Hinge loss uniformly in α as σ tends to 0. By replacing the Hinge loss with these two smooth Hinge losses, we obtain two smooth support vector machines(SSVMs), respectively. Solving the SSVMs with the Trust Region Newton method (TRON) leads to two quadratically convergent algorithms. Experiments in text classification tasks show that the proposed SSVMs are effective in real-world applications. We also introduce a general smooth convex loss function to unify several commonly-used convex loss functions in machine learning. The general framework provides smooth approximation functions to non-smooth convex loss functions, which can be used to obtain smooth models that can be solved with faster convergent optimization algorithms. 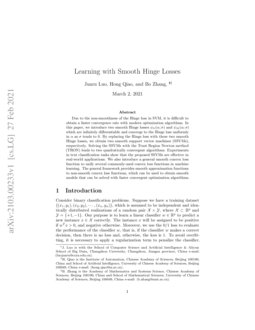 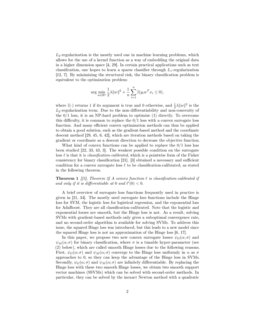 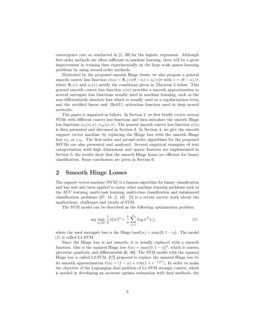 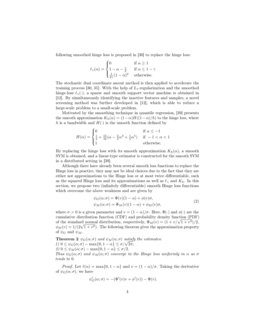 Consider binary classification problems. Suppose we have a training dataset {(x1,y1),(x2,y2),⋯,(xn,yn)}, which is assumed to be independent and identically distributed realizations of a random pair X×Y, where X⊂Rp and Y={+1,−1}

. Our purpose is to learn a linear classifier

w∈Rp to predict a new instance x∈X correctly. The instance x will be assigned to be positive if wTx>0, and negative otherwise. Moreover, we use the 0/1 loss to evaluate the performance of the classifier w, that is, if the classifier w makes a correct decision, then there is no loss and, otherwise, the loss is 1. To avoid overfitting, it is necessary to apply a regularization term to penalize the classifier. L2-regularization is the mostly used one in machine learning problems, which allows for the use of a kernel function as a way of embedding the original data in a higher dimension space [4, 29]. In certain practical applications such as text classification, one hopes to learn a sparse classifier through L1-regularization [12, 7]. By minimizing the structural risk, the binary classification problem is equivalent to the optimization problem:

where I(⋅) returns 1 if its argument is true and 0 otherwise, and 12λ∥w∥2 is the L2-regularization term. Due to the non-differentiability and non-convexity of the 0/1 loss, it is an NP-hard problem to optimize (1) directly. To overcome this difficulty, it is common to replace the 0/1 loss with a convex surrogate loss function. And many efficient convex optimization methods can thus be applied to obtain a good solution, such as the gradient-based method and the coordinate descent method [29, 45, 6, 43], which are iteration methods based on taking the gradient or coordinate as a descent direction to decrease the objective function.

A brief overview of surrogate loss functions frequently used in practice is given in [21, 34]

. The mostly used surrogate loss functions include the Hinge loss for SVM, the logistic loss for logistical regression, and the exponential loss for AdaBoost. They are all classification-calibrated. Note that the logistic and exponential losses are smooth, but the Hinge loss is not. As a result, solving SVMs with gradient-based methods only gives a suboptimal convergence rate, and no second-order algorithm is available for solving SVMs. To address this issue, the squared Hinge loss was introduced, but this leads to a new model since the squared Hinge loss is not an approximation of the Hinge loss

In this paper, we propose two new convex surrogate losses ψG(α;σ) and ψM(α;σ) for binary classification, where σ is a tunable hyper-parameter (see (2) below), which are called smooth Hinge losses due to the following reasons. First, ψG(α;σ) and ψM(α;σ) converge to the Hinge loss uniformly in α as σ approaches to 0, so they can keep the advantage of the Hinge loss in SVMs. Secondly, ψG(α;σ) and ψM(α;σ) are infinitely differentiable. By replacing the Hinge loss with these two smooth Hinge losses, we obtain two smooth support vector machines (SSVMs) which can be solved with second-order methods. In particular, they can be solved by the inexact Newton method with a quadratic convergence rate as conducted in [1, 20] for the logistic regression. Although first-order methods are often sufficient in machine learning, there will be a great improvement in training time experimentally on the large scale sparse learning problems by using second-order methods.

provides a smooth approximation to several surrogate loss functions usually used in machine learning, such as the non-differentiable absolute loss which is usually used as a regularization term, and the rectified linear unit (ReLU) activation function used in deep neural networks.

The SVM model can be described as the following optimization problem

. In order to make the objective of the Lagrangian dual problem of L1-SVM strongly convex, which is needed in developing an accurate optima estimation with dual methods, the following smoothed hinge loss is proposed in

The stochastic dual coordinate ascent method is then applied to accelerate the training process [30, 31]. With the help of L1-regularization and the smoothed hinge-loss ℓγ(⋅), a sparse and smooth support vector machine is obtained in [12]. By simultaneously identifying the inactive features and samples, a novel screening method was further developed in [12], which is able to reduce a large-scale problem to a small-scale problem.

Motivated by the smoothing technique in quantile regression,

By replacing the hinge loss with its smooth approximation Kh(α), a smooth SVM is obtained, and a linear-type estimator is constructed for the smooth SVM in a distributed setting in [39].

It then follows that

Thus, ψ′M(α;σ)=−ΦM(v)≤0, implying that ψM is monotonically decreasing. Similarly as for ψG, we can easily prove that

The proof is thus complete. ■

Motivated by (3) and (4) we propose a general smooth convex loss function as stated in the following theorem.

1) It is easy to obtain that

Note that if Φc and ϕc satisfy the conditions in Theorem 3 and Φc(v)≥0, suppose v=v(α) is convex and differentiable, then ψv(α)=Φc(v)v+ϕc(v) is also convex. The general smooth convex loss function ψ(α) includes many surrogate loss functions mostly used in binary classification as special cases, as shown below. Figure 1 below presents several surrogate convex loss functions.

which is the least square loss. The parameter θ satisfies Φc(θ/σ)=θ>0. The conditions in Theorem 3 are easy to verify, and it is easy to obtain that

In addition, we have

By Theorem 3 we have the following remarks.

2) Given a monotonically increasing, differentiable function Φc(v), we are able to construct a convex, smooth surrogate loss which is classification-calibrated for binary classification. Moreover, there is no need to know the explicit expression of the loss function when learning with gradient-based methods.

There are many algorithms for SVMs. In the early time, the decomposition methods such as SMO and SVMlight, which overcome the memory requirement of the quadratic optimization methods, have been proposed to solve L1-SVM in its dual form [26, 15] (see [41] for convergence analysis of the decomposition methods including SMO and SVMlight). Later, several convex optimization methods have been introduced, such as the gradient-based methods [43], the bundle method [35, 11], the coordinate descent method [42, 6], the dual method [13, 30, 45] and online learning methods [29, 37, 10]. Based on the generalized Hessian matrix of a convex function with locally Lipschitz gradient proposed in [23], several second-order methods have been applied to solve L2-SVM [16, 20].

In this paper, we focus on the following smooth support vector machine

where ψ is the smooth Hinge loss ψG or ψM. We will analyze the first and second-order convex algorithms for the above SSVM.

The gradient descent (GD) method has taken the stage as the primary workhorse for convex optimization problems. It iteratively approaches the optimal solution. In each iteration, the standard full gradient descent (FGD) method takes the negative gradient as the descent direction, and the classifier updates as follows

where ηt is a predefined step size and vti=(1−yiwTtxi)/σ. The FGD method has a O(1/t) convergence rate under standard assumptions [24]. Nesterov proposed a famous accelerated gradient (AGD) method in 1982 (see [24]). The AGD method achieves the optimal convergence rate of O(1/t2) for smooth objective functions.

However, for large-scale problems it is computationally very expensive to compute the full gradient in each iteration. To accelerate the learning procedure, the linear classifier can be updated with a stochastic gradient (SG) step instead of a full gradient (FG) step, such as Pegasos [29]. Precisely, at the t-th iteration, wt is updated based on a randomly chosen example (xit,yit):

An advantage of the above stochastic gradient descent (SGD) algorithm is that its iteration cost is independent of the number of training examples. This property makes it suitable for large-scale problems. In the SGD algorithm, the full gradient

−(1/n)∑ni=1Φc(vti)yixi is replaced by a stochastic gradient −Φc(vtit)yitxit of a randomly chosen example in the t-th iteration. Though both gradients are equivalent in expectation, they are rarely the same. Thus, it is not a natural to use the norm of the stochastic gradient, ∥Φc(vtit)yitxit∥, as a stopping criterion. The discrepancy between the FG and the SG also has a negative effect on the convergence rate of the SGD method. Since there is no guarantee that ∥Φc(vtit)yitxit∥ will approach to zero, we need to employ a monotonically decreasing step size series {ηt}∞t=0 with ηt→0 for convergence. The small step size leads to a sub-linear convergence of the SGD method even for the strongly convex objective function.

[8, 36]. These novel algorithms are known as stochastic variance reduction gradient (SVRG) algorithms, such as SAG [28], SAGA [8], SDCA [30], Finito [9], and SVRG [36]. Their convergence analysis can be found in the corresponding references.

Recently, inexact Newton methods without computing the inverse Hessian matrix have been proposed to obtain a superlinear convergence rate in machine learning, such as LiSSA [1] and TRON [19, 20]. LiSSA constructs a natural estimator of the inverse Hessian matrix by using the Taylor expansion, while TRON is a trust region Newton method introduced in [19] to deal with general bound-constrained optimization problems, which generates an approximate Newton direction by solving a trust-region subproblem. In TRON, the direction step should give as much reduction as the Cauchy step. [20] applied the TRON method to maximize the log-likelihood of the logistic regression model, in which a conjugate gradient method was used to solve the trust-region subproblem approximately. TRON was also extended to solve the L2-SVM model by introducing a general Hessian for convex objective functions having a Lipschitz continuous gradient [23].

We want to apply TRON to solve our SSVM problem (5). By Theorem 2 we have

where vi=(1−yiwTxi)/σ and di=Φ′c(vi)/σ. Then the Hessian matrix of the total loss function L(w) is given by

where E is the p×pidentity matrix, D=diag(d1,⋯,dn) is a diagonal matrix, and X is the input feature matrix with its each row representing an instance.