Cross-lingual word embeddings aim to capture common linguistic regularities of different languages, which benefit various downstream tasks ranging from machine translation to transfer learning. Recently, it has been shown that these embeddings can be effectively learned by aligning two disjoint monolingual vector spaces through a linear transformation (word mapping). In this work, we focus on learning such a word mapping without any supervision signal. Most previous work of this task adopts parametric metrics to measure distribution differences, which typically requires a sophisticated alternate optimization process, either in the form of minmax game or intermediate density estimation. This alternate optimization process is relatively hard and unstable. In order to avoid such sophisticated alternate optimization, we propose to learn unsupervised word mapping by directly maximizing the mean discrepancy between the distribution of transferred embedding and target embedding. Extensive experimental results show that our proposed model outperforms competitive baselines by a large margin. 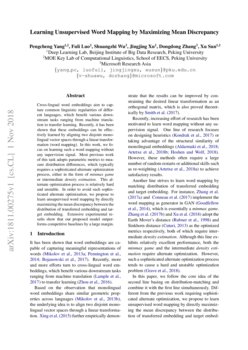 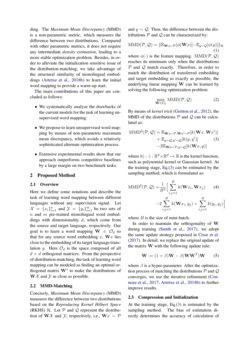 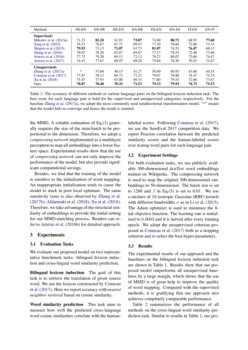 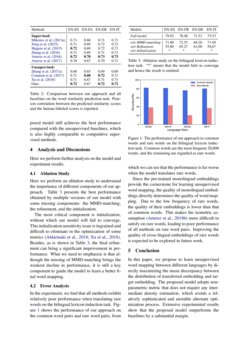 Improving Cross-Lingual Word Embeddings by Meeting in the Middle

Recent research on cross-lingual word embeddings has been dominated by u...
Aitor Ormazabal, et al. ∙

Based on the observation that monolingual word embeddings share similar geometric properties across languages Mikolov et al. (2013b), the underlying idea is to align two disjoint monolingual vector spaces through a linear transformation. Xing et al. (2015)

further empirically demonstrate that the results can be improved by constraining the desired linear transformation as an orthogonal matrix, which is also proved theoretically by

Recently, increasing effort of research has been motivated to learn word mapping without any supervision signal. One line of research focuses on designing heuristics

Kondrak et al. (2017) or taking advantage of the structural similarity of monolingual embeddings Aldarmaki et al. (2018); Artetxe et al. (2018b); Hoshen and Wolf (2018). However, these methods often require a large number of random restarts or additional skills such as re-weighting Artetxe et al. (2018a) to achieve satisfactory results.

Another line strives to learn word mapping by matching distribution of transferred embedding and target embedding. For instance, Zhang et al. (2017a) and  Conneau et al. (2017) implement the word mapping as generator in GAN Goodfellow et al. (2014), which is essentially a minmax game. Zhang et al. (2017b) and Xu et al. (2018) adopt the Earth Mover’s distance Rubner et al. (1998) and Sinkhorn distance Cuturi (2013) as the optimized metrics respectively, both of which require intermediate density estimation. Although this line exhibits relatively excellent performance, both the minmax game and the intermediate density estimation require alternate optimization. However, such a sophisticated alternate optimization process tends to cause a hard and unstable optimization problem Grave et al. (2018).

In this paper, we follow the core idea of the second line basing on distribution-matching and combine it with the first line simultaneously. Different from the previous work requiring sophisticated alternate optimization, we propose to learn unsupervised word mapping by directly maximizing the mean discrepancy between the distribution of transferred embedding and target embedding. The Maximum Mean Discrepancy (MMD) is a non-parametric metric, which measures the difference between two distributions. Compared with other parametric metrics, it does not require any intermediate density estimation, leading to a more stable optimization problem. Besides, in order to alleviate the initialization sensitive issue of the distribution-matching, we take advantage of the structural similarity of monolingual embeddings Artetxe et al. (2018b) to learn the initial word mapping to provide a warm-up start.

The main contributions of this paper are concluded as follows:

Here we define some notations and describe the task of learning word mapping between different languages without any supervision signal. Let X={xi}ni=1 and Y={yi}mi=1 be two sets of n and m pre-trained monolingual word embeddings with dimensionality d, which come from the source and target language, respectively. Our goal is to learn a word mapping W∈Od so that for any source word embedding x, Wx lies close to the embedding of its target language translation y. Here Od is the space composed of all d×d orthogonal matrices. From the perspective of distribution-matching, the task of learning word mapping can be modeled as finding an optimal orthogonal matrix W⋆ to make the distributions of WX and Y as close as possible.

where ϕ(⋅) is the feature mapping. MMD(P,Q) reaches its minimum only when the distributions P and Q match exactly. Therefore, in order to match the distribution of transferred embedding and target embedding as exactly as possible, the underlying linear mapping W can be learned by solving the following optimization problem:

By means of kernel trick Gretton et al. (2012), the MMD of the distributions P and Q can be calculated as:

where k(⋅,⋅):Rd×Rd↦R is the kernel function, such as polynomial kernel or Gaussian kernel. At the training stage, Eq.(3) can be estimated by the sampling method, which is formulated as:

where B is the size of mini-batch.

In order to maintain the orthogonality of W during training Smith et al. (2017), we adopt the same update strategy proposed in Cisse et al. (2017). In detail, we replace the original update of the matrix W with the following update rule:

where β is a hyper-parameter. After the optimization process of matching the distributions P and Q converges, we use the iterative refinement Conneau et al. (2017); Artetxe et al. (2018b) to further improve results.

At the training stage, Eq.(3) is estimated by the sampling method. The bias of estimation directly determines the accuracy of calculation of the MMD. A reliable estimation of Eq.(3) generally requires the size of the mini-batch to be proportional to the dimension. Therefore, we adopt a compressing network

implemented as a multilayer perceptron to map all embeddings into a lower feature space. Experimental results show that the use of

compressing network can not only improve the performance of the model, but also provide significant computational savings.

Besides, we find that the training of the model is sensitive to the initialization of word mapping. An inappropriate initialization tends to cause the model to stuck in poor local optimum. The same sensitivity issue is also observed by Zhang et al. (2017b); Aldarmaki et al. (2018); Xu et al. (2018). Therefore, we take advantage of the structural similarity of embeddings to provide the initial setting for our MMD-matching process. Readers can refer to Artetxe et al. (2018b) for detailed approach.

The goal of this task is to retrieve the translation of given source word. We use the lexicon constructed by Conneau et al. (2017). Here we report accuracy with nearest neighbor retrieval

based on cosine similarity.

This task aims to measure how well the predicted cross-language word cosine similarities correlate with the human-labeled scores. Following Conneau et al. (2017), we use the SemEval 2017 competition data. We report Pearson correlation between the predicted similarity scores and the human-labeled scores over testing word pairs for each language pair.

For both evaluation tasks, we use publicly available 300-dimensional fastText word embeddings trained on Wikipedia. The compressing network is used to map the original 300-dimensional embeddings to 50-dimensional. The batch size is set to 1280 and β in Eq.(5) is set to 0.01. We use a mixture of 10 isotropic Gaussian (RBF) kernels with different bandwidths σ as in Li et al. (2015). The Adam optimizer is used to minimize the final objective function. The learning rate is initialized to 0.0003

and it is halved after every training epoch. We adopt the unsupervised criterion proposed in

Conneau et al. (2017) both as a stopping criterion and to select the best hyper-parameters.

The experimental results of our approach and the baselines on the bilingual lexicon induction task are shown in Table 1. Results show that our proposed model outperforms all unsupervised baselines by a large margin, which shows that the use of MMD is of great help to improve the quality of word mapping. Compared with the supervised methods, it is gratifying that our approach also achieves completely comparable performance.

Table 2 summarizes the performance of all methods on the cross-lingual word similarity prediction task. Similar to results in Table 1, our proposed model still achieves the best performance compared with the unsupervised baselines, which is also highly comparable to competitive supervised methods.

Here we perform further analysis on the model and experiment results.

Here we perform an ablation study to understand the importance of different components of our approach. Table 3 presents the best performance obtained by multiple versions of our model with some missing components: the MMD-matching, the refinement, and the initialization.

The most critical component is initialization, without which our model will fail to converge. This initialization sensitivity issue is ingrained and difficult to eliminate in the optimization of some metrics Aldarmaki et al. (2018); Xu et al. (2018). Besides, as is shown in Table 3, the final refinement can bring a significant improvement in performance. What we need to emphasize is that although the missing of MMD-matching brings the weakest decline in performance, it is still a key component to guide the model to learn a better final word mapping.

In the experiment, we find that all methods exhibit relatively poor performance when translating rare words on the bilingual lexicon induction task. Figure 1 shows the performance of our approach on the common word pairs and rare word pairs, from which we can see that the performance is far worse when the model translates rare words.

In this paper, we propose to learn unsupervised word mapping between different languages by directly maximizing the mean discrepancy between the distribution of transferred embedding and target embedding. The proposed model adopts non-parametric metric that does not require any intermediate density estimation, which avoids a relatively sophisticated and unstable alternate optimization process. Extensive experimental results show that the proposed model outperforms the baselines by a substantial margin.