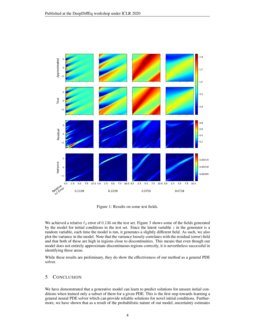 Partial differential equations (PDEs) are of great importance in various fields such as science, engineering and economics. However, despite this, it is generally not possible to obtain analytic solutions for them. Instead, one has to resort to numerical schemes for approximating these solutions. However, these numerical schemes are both slow and computationally intensive especially for higher dimensions. Furthermore, the higher the dimension is, the greater is the error in the calculation of the derivatives required to approximate the solution.

Recently, Raissi et al. (2019) proposed to use neural networks to approximate solutions of PDEs. They do so by forcing neural networks to produce outputs that satisfy the PDE. The derivatives required to enforce this condition are computed using automatic differentiation and are exact up to the precision of the computing machine. Furthermore, this approach is mesh free i.e. one does not need to discretize the domain of the solution as required in methods such as finite element analysis.

In parallel, we have seen tremendous improvements in the generalization capacities of machine learning methods such as generative adversarial networks and flow-based models. These models have demonstrated a remarkable ability to capture probability distributions even when only representative samples are available [

In this work, we generalize the framework of Yang and Perdikaris (2018) over the distribution of initial conditions and demonstrate that even if the model is trained on a subset of them, it is able to generalize well and produce solutions for any arbitrary initial conditions. Furthermore, our model also provides uncertainty quantifications which loosely correlate with the error in the solution.

This paper is structured as follows: in Section 2, we provide an overview of related works on partial differential equations. Section 3 presents our method and Section 4 talks about our experiments and results. Finally, Section 5 concludes the paper.

made the first attempt at using neural networks to approximate solutions of PDEs. However, the idea did not catch up. The recent renaissance of neural networks and its remarkable successes in computer vision and natural language processing [

was a critical development. It made two major contributions: (a) it showed that the automatic differentiation machinery of machine learning frameworks such as TensorFlow allowed the computation of partial derivatives to a higher order of accuracy than finite differences, and (b) it empirically showed that neural networks can be used to approximate solutions of PDEs by simply forcing them to produce outputs that satisfy the PDE. This framework has since been extended to fractional and stochastic PDEs [

Neural network based solvers do not, in general, provide any convergence guarantees. Hence, it is important to have an uncertainty estimate for the solution produced by these methods.

Concurrent to this has been considerable work on combining various classical solvers with machine learning methods to obtain more efficient solvers such as combining the Runge Kutta method with convolutional networks in Zhu et al. (2018)

and the Galarkin method with deep learning in

However, one area which has attracted considerably less attention is attempting to learn a ‘general’ PDE solver through neural networks. General, in this context, refers to a PDE solver which does not need to be retrained if one or more constraints such as the initial or boundary condition or the domain are changed. Rather, the general PDE solver relies on the generalization capacity of neural networks to approximate the solution of a PDE across all possible sets of constraints. In this regard, Hsieh et al. (2019) and Farimani et al. (2017) have, for example, demonstrated that it is possible to learn a general PDE solver for some simple linear and elliptic PDEs. However, developing a single general PDE solver for all types of PDEs (parabolic, elliptic and hyperbolic) still remains an open problem.

We consider partial differential equations (PDEs) of the form

We propose to train a single Generative Adversarial Network (GAN) [Goodfellow et al. (2014)] for solving a PDE of the form of Equation 1 for any initial conditions drawn from the distribution I. Note that the PDE is fixed (i.e. f is fixed) and only the initial conditions are varied. The generator Gθ

takes in as input a random noise vector

In addition to minimizing the typical GAN loss [Goodfellow et al. (2014)] given by

As noted before, the derivatives can readily be obtained via automatic differentiation.

Furthermore, we also force the true and approximated initial conditions to be equal by minimizing

Note that t is fixed here.

where xUB and xLB denote the upper and lower boundary values of x respectively.

Our overall objective function is therefore given by

where α, β and γ are scalars.

In this section, we demonstrate our model on the Burger’s equation which is given by

We concatenate u(x,t=0) at each of the 512 values for x into a vector. These are our initial conditions. We feed these initial conditions into our model as described in the previous section. Table 1 describes the model architecture. The reconstructor is fed the approximator’s outputs at 64 different spatio-temporal coordinates. We trained the model parameters using the Adam optimizer with a learning rate of 0.001 for 1.6 million iterations. At each iteration, we feed the model 64 initial points to enforce LIC, 64 boundary points to enforce LBC and 512 colocation points to enforce LPDE and LGAN.

We achieved a relative ℓ2 error of 0.136 on the test set. Figure 1 shows some of the fields generated by the model for initial conditions in the test set. Since the latent variable z

in the generator is a random variable, each time the model is run, it generates a slightly different field. As such, we also plot the variance in the model. Note that the variance loosely correlates with the residual (error) field and that both of these are high in regions close to discontinuities. This means that even though our model does not entirely approximate discontinuous regions correctly, it is nevertheless successful in identifying these areas.

While these results are preliminary, they do show the effectiveness of our method as a general PDE solver.

We have demonstrated that a generative model can learn to predict solutions for unseen initial conditions when trained only a subset of them for a given PDE. This is the first step towards learning a general neural PDE solver which can provide reliable solutions for novel initial conditions. Furthermore, we have shown that as a result of the probabilistic nature of our model, uncertainty estimates also become freely available and, in our observation, correspond loosely with the error in the approximated solution of the PDE.