Adversarial training provides a principled approach for training robust neural networks. From an optimization perspective, the adversarial training is essentially solving a minmax robust optimization problem. The outer minimization is trying to learn a robust classifier, while the inner maximization is trying to generate adversarial samples. Unfortunately, such a minmax problem is very difficult to solve due to the lack of convex-concave structure. This work proposes a new adversarial training method based on a general learning-to-learn framework. Specifically, instead of applying the existing hand-design algorithms for the inner problem, we learn an optimizer, which is parametrized as a convolutional neural network. At the same time, a robust classifier is learned to defense the adversarial attack generated by the learned optimizer. Our experiments demonstrate that our proposed method significantly outperforms existing adversarial training methods on CIFAR-10 and CIFAR-100 datasets. 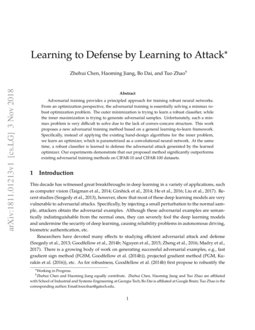 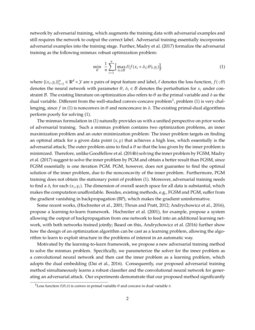 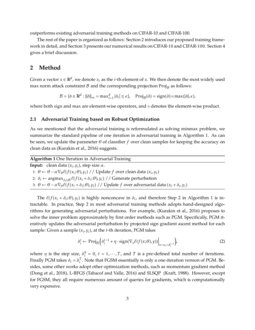 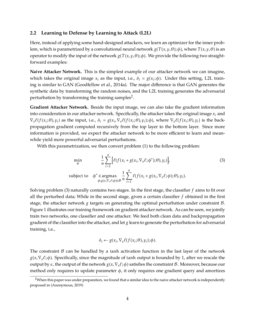 Get Fooled for the Right Reason: Improving Adversarial Robustness through a Teacher-guided Curriculum Learning Approach

Adversarial training (AT) has been demonstrated as one of the most promi...
Chuanbiao Song, et al. ∙

This decade has witnessed great breakthroughs in deep learning in a variety of applications, such as computer vision

f(⋅;θ) denotes the neural network with parameter θ, δi∈\cB denotes the perturbation for xi under constraint \cB. The existing literature on optimization also refers to θ as the primal variable and δ as the dual variable. Different from the well-studied convex-concave problem222Loss function ℓ(θ;δ) is convex in primal variable θ and concave in dual variable δ., problem (1) is very challenging, since f in (1) is nonconvex in θ and nonconcave in δ. The existing primal-dual algorithms perform poorly for solving (1).

Some recent works, (Hochreiter et al., 2001; Thrun and Pratt, 2012; Andrychowicz et al., 2016), propose a learning-to-learn framework. Hochreiter et al. (2001), for example, propose a system allowing the output of backpropagation from one network to feed into an additional learning network, with both networks trained jointly; Based on this, Andrychowicz et al. (2016) further show how the design of an optimization algorithm can be cast as a learning problem, allowing the algorithm to learn to exploit structure in the problems of interest in an automatic way.

The rest of the paper is organized as follows: Section 2 introduces our proposed training framework in detail, and Section 3 presents our numerical results on CIFAR-10 and CIFAR-100. Section 4 gives a brief discussion.

x∈\RRd, we denote xi as the i-th element of x. We then denote the most widely used max norm attack constraint \cB and the corresponding projection Proj\cB as follows:

2.1 Adversarial Training based on Robust Optimization

As we mentioned that the adversarial training is reformulated as solving minmax problem, we summarize the standard pipeline of one iteration in adversarial training in Algorithm 1. As can be seen, we update the parameter θ of classifier f over clean samples for keeping the accuracy on clean data as (Kurakin et al., 2016) suggests.

The ℓ(f(xi+δi;θ),yi) is highly nonconcave in δi, and therefore Step 2 in Algorithm 1 is intractable. In practice, Step 2 in most adversarial training methods adopts hand-designed algorithms for generating adversarial perturbations. For example, (Kurakin et al., 2016) proposes to solve the inner problem approximately by first order methods such as PGM. Specifically, PGM iteratively updates the adversarial perturbation by projected sign gradient ascent method for each sample: Given a sample (xi,yi), at the t-th iteration, PGM takes

where η is the step size, δ0i=0, t=1,⋯,T, and T is a pre-defined total number of iterations. Finally PGM takes δi=δTi. Note that FGSM essentially is only a one-iteration version of PGM. Besides, some other works adopt other optimization methods, such as momentum gradient method (Dong et al., 2018), L-BFGS (Tabacof and Valle, 2016) and SLSQP  (Kraft, 1988). However, except for FGSM, they all require numerous amount of queries for gradients, which is computationally very expensive.

Here, instead of applying some hand-designed attackers, we learn an optimizer for the inner problem, which is parametrized by a convolutional neural network g(T(x,y,θ);ϕ), where T(x,y,θ) is an operator to modify the input of the network g(T(x,y,θ);ϕ). We provide the following two straightforward examples:

Naive Attacker Network. This is the simplest example of our attacker network we can imagine, which takes the original image xi as the input, i.e., δi=g(xi;ϕ). Under this setting, L2L training is similar to GAN (Goodfellow et al., 2014a). The major difference is that GAN generates the synthetic data by transforming the random noises, and the L2L training generates the adversarial perturbation by transforming the training samples333When this paper was under preparation, we found that a similar idea to the naive attacker network is independently proposed in (Anonymous, 2019).

Gradient Attacker Network. Beside the input image, we can also take the gradient information into consideration in our attacker network. Specifically, the attacker takes the original image xi and ∇xℓ(f(xi;θ),yi) as the input, i.e., δi=g(xi,∇xℓ(f(xi;θ),yi);ϕ), where ∇xℓ(f(xi;θ),yi) is the back-propagation gradient computed recursively from the top layer to the bottom layer. Since more information is provided, we expect the attacker network to be more efficient to learn and meanwhile yield more powerful adversarial perturbations.

With this parametrization, we then convert problem (1) to the following problem:

Solving problem (???) naturally contains two stages. In the first stage, the classifier f aims to fit over all the perturbed data; While in the second stage, given a certain classifier f obtained in the first stage, the attacker network g targets on generating the optimal perturbation under constraint \cB. Figure 1 illustrates our training framework on gradient attacker network. As can be seen, we jointly train two networks, one classifier and one attacker. We feed both clean data and backpropagation gradient of the classifier into the attacker, and let g learn to generate the perturbation for adversarial training, i.e.,

The constraint \cB can be handled by a tanhactivation function in the last layer of the network g(x,∇xℓ;ϕ). Specifically, since the magnitude of tanh output is bounded by 1, after we rescale the output by ϵ, the output of the network g(x,∇xℓ;ϕ) satisfies the constraint \cB. Moreover, because our method only requires to update parameter ϕ, it only requires one gradient query and amortizes the adversarial training cost, which leads to better computational efficiency. The corresponding training procedure is shown in Algorithm 2.

To demonstrate the efficiency and effectiveness of our proposed new method, we present experimental results on CIFAR-10 and CIFAR-100 datasets. We consider two attack methods: FGSM and PGM, and evaluate the robustness of deep neural networks models under both black-box and white-box setting. All experiments are done in PyTorch with one NVIDIA 1080Ti GPU, and all reported results are averaged over 10 runs with different random initializations (Summarized in Tables 1 and 2).

. For training the attacker network, we use the stochastic gradient descent (SGD) algorithm with Polyak’s momentum (the momentum parameter is

Under the white-box setting, attackers are able to access all parameters of target models and generate adversarial examples based on the target models. Under the black-box setting, accessing parameters is prohibited. Therefore, we adopt the standard transfer attack method (Liu et al., 2016). Specifically, we train another classifier with a different random seed, and then based on this classifier, attackers generate adversarial examples to attack the target model.

Grad L2L v.s. PGM. From Table 1, we see that in terms of the classification accuracy of adversarial examples, our proposed Grad L2L training uniformly outperforms PGM training over all settings, even when the adversarial attack is generated by PGM. Moreover, from Table 2, we see that our proposed Grad L2L training is computationally more efficient than PGM training.