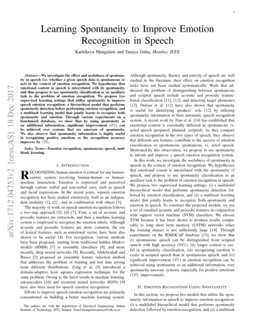 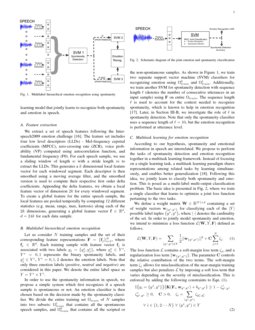 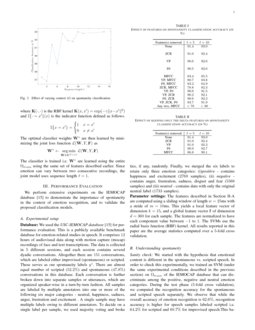 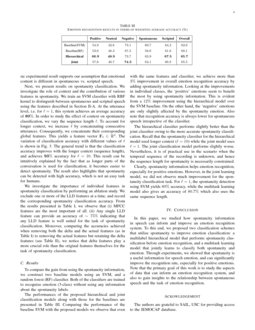 The Role of Phonetic Units in Speech Emotion Recognition

Recently, increasing attention has been directed to the study of the spe...
Haotian Guan, et al. ∙

The Effect of Silence Feature in Dimensional Speech Emotion Recognition

Silence is a part of human-to-human communication, which can be a clue f...
Bagus Tris Atmaja, et al. ∙

Recognizing human emotion is critical for any human-centric system involving human-human or human-machine interaction. Emotion is expressed and perceived through various verbal and non-verbal cues, such as speech and facial expressions. In the recent years, speech emotion recognition has been studied extensively, both as an independent modality [1, 2], and in combination with others [3]

. The majority of work on speech emotion recognition follows a two step approach. First, a set of acoustic and prosodic features are extracted, and then a machine learning system is employed to recognize the emotion labels

. Although acoustic and prosodic features are more common, the use of lexical features, such as emotional vector, have been also shown to be useful

introduced a domain-adaptive least squares regression technique for the same problem. Owing to the latest trends in machine learning, autoencoders

[9] have also been used for speech emotion recognition. Efforts to improve speech emotion recognition are primarily concentrated on building a better machine learning system. Although spontaneity, fluency and nativity of speech are well studied in the literature, their effect on emotion recognition tasks is not well studied. Work that addressed the problem of distinguishing between spontaneous and scripted speech include acoustic and prosodic feature-based classification [13, 14], and detecting target phonemes [15]. Dufour et al. [14] have also shown that spontaneity is useful for identifying speakers’ role [14] by utilizing spontaneity information in their automatic speech recognition system. A recent work by Tian et al. [16]

that jointly learns to recognize both spontaneity and emotion in speech and returns two labels. To construct the proposed models, we use a set of standard acoustic and prosodic features in conjunction with support vector machine (SVM) classifiers. We choose SVM because it has been shown to produce results comparable to long short term memory (LSTM) networks when the training dataset is not sufficiently large

[16]. Through experiments on the IEMOCAP database [17]

, we observe that (i) recognizing emotion is easier in spontaneous speech than in scripted speech, (ii) longer context is useful in spontaneity classification, and (iii) significant improvement in emotion recognition can be achieved using spontaneity as an additional information, over spontaneity-unaware systems. The rest of this paper is organized as follows: Section 2 describes the feature extraction process and the two supervised classification methods we have used for using spontaneity in emotion classification. Section 3 provides details on the experimental setup and results, followed by conclusion in Section 4.

with a stride length

m to extract the LLDs. This generates a k dimensional local feature vector for each windowed segment. Each descriptor is then smoothed using a moving average filter, and the smoothed version is used to compute their respective first order delta coefficients. Appending the delta features, we obtain a local feature vector of dimension 2k for every windowed segment. To create a global feature for the entire speech sample, the local features are pooled temporally by computing 12

different statistics (e.g. mean, range, max, kurtosis) along each of the

Let us consider N training samples and their corresponding feature representations F={fj}Ni=1, where fj∈Rd. Each training sample with feature vector fj is associated with two labels yj={ysj,yej}, where ysj∈Ys, Ys=0,1 represents the binary spontaneity labels, and yej∈Ye, Ye=0,1,2,3 denotes the emotion labels. Note that only four emotion labels are considered in this paper. We denote the entire label space as Y=Ys×Yi.

In order to use the spontaneity information in speech, we propose a simple system which first recognizes if a speech sample is spontaneous or not. An emotion classifier is then chosen based on the decision made by the spontaneity classifier. We divide the entire training set Ωtrain of N samples into two subsets: Ω1train that contains all the spontaneous speech samples, and Ω0train that contains all the scripted or the non-spontaneous samples. As shown in Figure 1, we train two separate support vector machine (SVM) classifiers for recognizing emotion using Ω0train and Ω1train. Additionally, we train another SVM for spontaneity detection with sequence length ℓ (denotes the number of consecutive utterances in an input sample) using F on entire Ωtrain. The sequence length ℓ is used to account for the context needed to recognize spontaneity, which is known to help in emotion recognition [19]. Later, in Section 3.2, we investigate the role of ℓ in spontaneity detection. Note that only the spontaneity classifier uses a sequence length of ℓ=10, but the emotion recognition is performed at utterance level.

2.3 Multitask learning for emotion and spontaneity

According to our hypothesis, spontaneity and emotional information in speech are interrelated. We perform the tasks of spontaneity detection and emotion recognition together in a multitask learning framework. Instead of focusing on a single learning task, a multitask learning paradigm shares representations among related tasks by learning simultaneously, and enables better generalization [20]. Following this idea, we jointly learn to classify both spontaneity and emotion. This is posed as a multilabel multioutput classification problem. The basic idea is presented in Fig. 2

, where we train a single classifier that learns to optimize a joint loss function pertaining to the two tasks. We define a weight matrix

W∈R|Y|×d containing a set of weight vectors w{ys,ye} for classifying each of the |Y| possible label tuples {ys,ye}, where |⋅| denotes the cardinality of the set. In order to jointly model spontaneity and emotion, we intend to minimize a loss function L(W,Y,F) defined as follows.

The loss function L is sum of a a regularization loss term ∥w{ys,ye}∥ and soft-margin loss term (optimization with slacks) i.e., ζj. The parameter C controls the relative balance of the two cost terms. The term ζj allows for misclassification of the near-margin training samples while penalizing L by imposing a loss term that varies on the degree of the misclassification. The optimal classifier weights W∗ are then learned by minimizing the joint loss function L(W,Y,F) as

The classifier is trained i.e., W∗ is learned using the entire Ωtrain using the same set of features described earlier. Since emotion can vary between two consecutive recordings, the joint model uses a sequence length of ℓ=1.

We perform detailed experiments on the IEMOCAP database [17] to demonstrate the importance of spontaneity in the context of emotion recognition, and to validate the proposed classification models.

Database: We used the USC-IEMOCAP database [17] for performance evaluation. It comprises 12 hours of audiovisual data along with motion capture (mocap) recordings of face and text transcriptions. The data is collected in 5 different sessions, and each session contains several dyadic conversations. Altogether there are 151 conversations, which are labeled either improvised (spontaneous) or scripted. This serves as our spontaneity label ys. There are almost equal number of scripted (52.2%) and spontaneous (47.8%) conversations in this database. Each conversation is further broken down to separate samples or utterances, which are organized speaker-wise in a turn-by-turn fashion. All samples are labeled by multiple annotators into one or more of the following six categories - neutral, joy, sadness, anger, frustration and excitement. A single sample may have multiple labels owing to different annotators. In such cases, the final label is chosen to be the label noted by the most annotators and randomly between all the leading labels in case of a tie. We used the four emotion categories: anger, joy, neutral, and sadness. Parameter settings: The features described in Section 2.1 are computed using a sliding window of length w=25ms with a stride of m=10ms. This yields a local feature vector of dimension k=15, and a global feature vector f of dimension d=360 for each sample. The features are normalized to have values between −1 to 1

. The SVMs use the radial basis function (RBF) kernel. All results reported are the average statistics computed over a

Sanity check: We started with the hypothesis that emotional content is different in the spontaneous vs. scripted speech. In order to check this experimentally, we trained an SVM (under the same experimental conditions described in the previous section) on Ωtrain of the IEMOCAP database that can discriminate among the anger, joy, neutral and sadness. During the test phase, we computed the recognition accuracy for the spontaneous and scripted speech separately. We observe that while the overall accuracy (using the baseline SVM) of emotion recognition is 65.4%, recognition accuracy is higher for speech samples labeled spontaneous i.e. 73.0% and 56.8% for scripted speech (see Table 4). This basic result supports our assumption that emotional content is different in spontaneous vs. scripted speech. This observation is also consistent with the results reported in a CNN-based recent work [10]. Role of context in spontaneity: We performed spontaneity classification to understand the role of various parameters. We investigate the role of context and the contribution of various features in spontaneity detection. We train an SVM classifier with RBF kernel to distinguish between spontaneous and scripted speech using the features described in Section 2.1. At the utterance level, i.e. for ℓ=1, this system achieves an average accuracy of 80%. In order to study the effect of context on spontaneity classification, we vary the sequence length ℓ. To account for longer context, we increase ℓ by concatenating consecutive utterances. Consequently, we concatenate their corresponding global features. This yields a feature vector Fℓ∈Rdℓ. The variation of classification accuracy with different values of ℓ is shown in Fig. 3. The general trend is that the classification accuracy improves with the longer context (sequence length), and achieves 93% accuracy for ℓ=10. This result can be intuitively explained by the fact that as longer parts of the conversation is used for classification, it becomes easier to detect spontaneity. The result also highlights that spontaneity can be detected with a fairly high accuracy and hence assures us that an additional spontaneity detection module would not harm the overall performance of a speech processing pipleline because of incorrect detection of spontaneity. Role of features: We investigate the importance of each feature individually in spontaneity classification by performing an ablation study. We exclude one or more of the LLD features at a time, and record the corresponding spontaneity classification accuracy. From the results presented in Table 1, we observe that (i) MFCC features are the most important of all. (ii) Any single LLD feature can provide an accuracy of ∼75% indicating that any LLD feature is well suited for the task of spontaneity classification. Moreover, comparing the accuracies achieved when removing both the delta and the actual features (as in Table 1) to removing the actual features but retaining the delta features (see Table 2), we notice that the delta features play a more crucial role than the original features themselves for the task of spontaneity classification.

[10], Rep. learning [21] ) is possibly the use of spontaneity and a longer context in the case of hierarchical method. The LSTM-based spontaneity aware method though uses the same four classes as ours, they use an aggregated corpus (using IEMOCAP and other databases) for training the LSTM network. Such training is different from our experimental setting.