Pre-trained language models have achieved huge improvement on many NLP tasks. However, these methods are usually designed for written text, so they do not consider the properties of spoken language. Therefore, this paper aims at generalizing the idea of language model pre-training to lattices generated by recognition systems. We propose a framework that trains neural lattice language models to provide contextualized representations for spoken language understanding tasks. The proposed two-stage pre-training approach reduces the demands of speech data and has better efficiency. Experiments on intent detection and dialogue act recognition datasets demonstrate that our proposed method consistently outperforms strong baselines when evaluated on spoken inputs. The code is available at https://github.com/MiuLab/Lattice-ELMo. 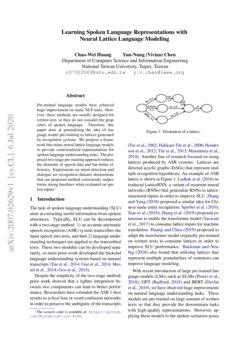 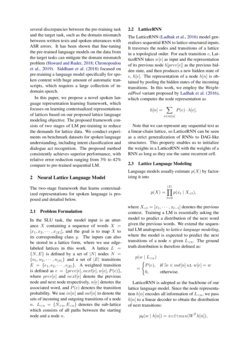 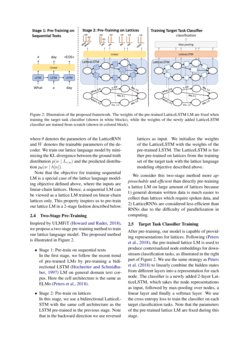 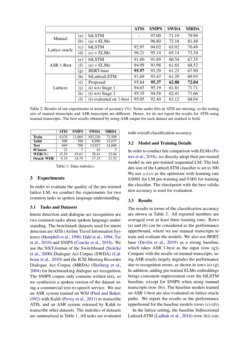 Towards Generalized Models for Task-oriented Dialogue Modeling on Spoken Conversations

Despite the simplicity of the two-stage method, prior work showed that a tighter integration between two components can lead to better performance. Researchers have extended the ASR 1-best results to n-best lists or word confusion networks in order to preserve the ambiguity of the transcripts.  Tur et al. (2002); Hakkani-Tür et al. (2006); Henderson et al. (2012); Tür et al. (2013); Masumura et al. (2018). Another line of research focused on using lattices produced by ASR systems. Lattices are directed acyclic graphs (DAGs) that represent multiple recognition hypotheses. An example of ASR lattice is shown in Figure 1. Ladhak et al. (2016)

introduced LatticeRNN, a variant of recurrent neural networks (RNNs) that generalize RNNs to lattice-structured inputs in order to improve SLU.

With recent introduction of large pre-trained language models (LMs) such as ELMo Peters et al. (2018), GPT Radford (2018) and BERT Devlin et al. (2019), we have observed huge improvements on natural language understanding tasks. These models are pre-trained on large amount of written texts so that they provide the downstream tasks with high-quality representations. However, applying these models to the spoken scenarios poses several discrepancies between the pre-training task and the target task, such as the domain mismatch between written texts and spoken utterances with ASR errors. It has been shown that fine-tuning the pre-trained language models on the data from the target tasks can mitigate the domain mismatch problem Howard and Ruder (2018); Chronopoulou et al. (2019). Siddhant et al. (2018) focused on pre-training a language model specifically for spoken content with huge amount of automatic transcripts, which requires a large collection of in-domain speech.

In this paper, we propose a novel spoken language representation learning framework, which focuses on learning contextualized representations of lattices based on our proposed lattice language modeling objective. The proposed framework consists of two stages of LM pre-training to reduce the demands for lattice data. We conduct experiments on benchmark datasets for spoken language understanding, including intent classification and dialogue act recognition. The proposed method consistently achieves superior performance, with relative error reduction ranging from 3% to 42% compare to pre-trained sequential LM.

The two-stage framework that learns contextualized representations for spoken language is proposed and detailed below.

In the SLU task, the model input is an utterance X containing a sequence of words X=[x1,x2,⋯,x|X|], and the goal is to map X to its corresponding class y. The inputs can also be stored in a lattice form, where we use edge-labeled lattices in this work. A lattice L={N,E} is defined by a set of |N| nodes N={n1,n2,⋯,n|N|} and a set of |E| transitions E={e1,e2,⋯,e|E|}. A weighted transition is defined as e={prev[e],next[e],w[e],P(e)}, where prev[e] and next[e] denote the previous node and next node respectively, w[e] denotes the associated word, and P(e)

denotes the transition probability. We use

in[n] and out[n] to denote the sets of incoming and outgoing transitions of a node n. L<n={N<n,E<n} denotes the sub-lattice which consists of all paths between the starting node and a node n.

Note that we can represent any sequential text as a linear-chain lattice, so LatticeRNN can be seen as a strict generalization of RNNs to DAG-like structures. This property enables us to initialize the weights in a LatticeRNN with the weights of a RNN as long as they use the same recurrent cell.

p(X) by factorizing it into

where X<t=[x1,⋯,xt−1] denotes the previous context. Training a LM is essentially asking the model to predict a distribution of the next word given the previous words. We extend the sequential LM analogously to lattice language modeling, where the model is expected to predict the next transitions of a node n given L<n. The ground truth distribution is therefore defined as:

LatticeRNN is adopted as the backbone of our lattice language model. Since the node representation h[n] encodes all information of L<n, we pass h[n] to a linear decoder to obtain the distribution of next transitions:

Note that the objective for training sequential LM is a special case of the lattice language modeling objective defined above, where the inputs are linear-chain lattices. Hence, a sequential LM can be viewed as a lattice LM trained on linear-chain lattices only. This property inspires us to pre-train our lattice LM in a 2-stage fashion described below.

Inspired by ULMFiT Howard and Ruder (2018), we propose a two-stage pre-training method to train our lattice language model. The proposed method is illustrated in Figure 2.

We consider this two-stage method more approachable and efficient than directly pre-training a lattice LM on large amount of lattices because 1) general domain written data is much easier to collect than lattices which require spoken data, and 2) LatticeRNNs are considered less efficient than RNNs due to the difficulty of parallelization in computing.

After pre-training, our model is capable of providing representations for lattices. Following Peters et al. (2018), the pre-trained lattice LM is used to produce contextualized node embeddings for downstream classification tasks, as illustrated in the right part of Figure 2. We use the same strategy as Peters et al. (2018)

to linearly combine the hidden states from different layers into a representation for each node. The classifier is a newly added 2-layer LatticeLSTM, which takes the node representations as input, followed by max-pooling over nodes, a linear layer and finally a softmax layer. We use the cross entropy loss to train the classifier on each target classification tasks. Note that the parameters of the pre-trained lattice LM are fixed during this stage.

In order to evaluate the quality of the pre-trained lattice LM, we conduct the experiments for two common tasks in spoken language understanding.

In order to conduct fair comparison with ELMo Peters et al. (2018), we directly adopt their pre-trained model as our pre-trained sequential LM. The hidden size of the LatticeLSTM classifier is set to 300. We use adam as the optimizer with learning rate 0.0001 for LM pre-training and 0.001 for training the classifier. The checkpoint with the best validation accuracy is used for evaluation.

The results in terms of the classification accuracy are shown in Table 2. All reported numbers are averaged over at least three training runs. Rows (a) and (b) can be considered as the performance upperbound, where we use manual transcripts to train and evaluate the models. We also use BERT-base Devlin et al. (2019) as a strong baseline, which takes ASR 1-best as the input (row (g)). Compare with the results on manual transcripts, using ASR results largely degrades the performance due to recognition errors, as shown in rows (e)-(g). In addition, adding pre-trained ELMo embeddings brings consistent improvement over the biLSTM baseline, except for SNIPS when using manual transcripts (row (b)). The baseline models trained on ASR 1-best are also evaluated on lattice oracle paths. We report the results as the performance upperbound for the baseline models (rows (c)-(d)).

In the lattice setting, the baseline bidirectional LatticeLSTM Ladhak et al. (2016) (row (h)) consistently outperforms the biLSTM with 1-best input (row (e)), demonstrating the importance of taking lattices into account. Our proposed method achieves the best results on all datasets except for ATIS (row(i)), with relative error reduction ranging from 3.2% to 42% compare to biLSTM+ELMo (row(f)). The proposed method also achieves performance comparable to BERT-base on ATIS. We perform ablation study for the proposed two-stage pre-training method and report the results in rows (j) and (k). It is clear that skipping either stage degrades the performance on all datasets, demonstrating that both stages are crucial in the proposed framework. We also evaluate the proposed model on 1-best results (row (l)). The results show that it is still beneficial to use lattice as input after fine-tuning.

We thank reviewers for their insightful comments. This work was financially supported from the Young Scholar Fellowship Program by Ministry of Science and Technology (MOST) in Taiwan, under Grant 109-2636-E-002-026.