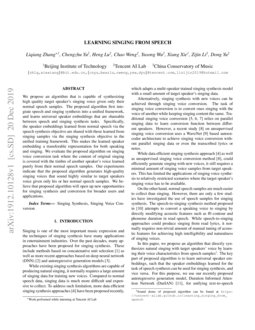 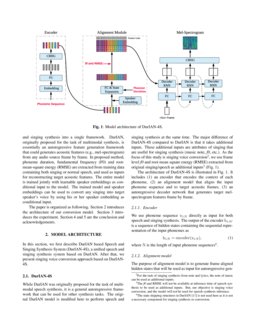 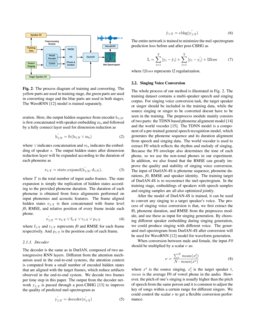 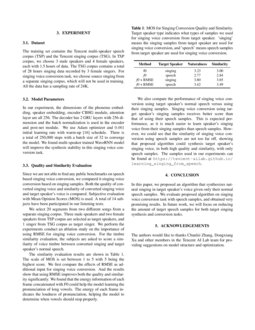 Singing is one of the most important music expression and the techniques of singing synthesis have many applications in entertainment industries. Over the past decades, many approaches have been proposed for singing synthesis. These include methods based on concatenative unit selection [3]

based autoencoder architecture to achieve singing voice conversion without parallel singing data or even the transcribed lyrics or notes.

On the other hand, normal speech samples are much easier to collect than singing. However, there are only a few studies have investigated the use of speech samples for singing synthesis. The speech-to-singing synthesis method proposed in [13] attempts to convert a speaking voice to singing by directly modifying acoustic features such as f0 contour and phoneme duration in read speech. While speech-to-singing approaches could produce singing from read lyrics, it normally requires non-trivial amount of manual tuning of acoustic features for achieving high intelligibility and naturalness of singing voices.

In this paper, we propose an algorithm that directly synthesizes natural singing with target speakers’ voice by learning their voice characteristics from speech samples111Sound demo of proposed algorithm can be found at https://tencent-ailab.github.io/learning_singing_from_speech. The key part of proposed algorithm is to learn universal speaker embeddings, such that the speaker embeddings learned for the task of speech synthesis can be used for singing synthesis, and vice versa. For this purpose, we use our recently proposed autoregressive generation model, Duration Informed Attention Network (DurIAN) [16], for unifying text-to-speech and singing synthesis into a single framework. DurIAN, originally proposed for the task of multimodal synthesis, is essentially an autoregressive feature generation framework that could generates acoustic features (e.g., mel-spectrogram) from any audio source frame by frame. In proposed method, phoneme duration, fundamental frequency (F0) and root-mean-square energy (RMSE) are extracted from training data containing both singing or normal speech, and used as inputs for reconstructing target acoustic features. The entire model is trained jointly with learnable speaker embeddings as conditional input to the model. The trained model and speaker embeddings can be used to convert any singing into target speaker’s voice by using his or her speaker embedding as conditional input.

The paper is organized as following. Section 2 introduces the architecture of our conversion model. Section 3 introduces the experiment. Section 4 and 5 are the conclusion and acknowledgements.

In this section, we first describe DurIAN based Speech and Singing Synthesis System (DurIAN-4S), a unified speech and singing synthesis system based on DurIAN. After that, we present singing voice conversion approach based on DurIAN-4S.

The architecture of DurIAN-4S is illustrated in Fig. 1. It includes (1) an encoder that encodes the context of each phoneme, (2) an alignment model that aligns the input phoneme sequence and to target acoustic frames, (3) an autoregressive decoder network that generates target mel-spectrogram features frame by frame.

We use phoneme sequence x1:N directly as input for both speech and singing synthesis. The output of the encoder h1:N′ is a sequence of hidden states containing the sequential representation of the input phonemes as

where N is the length of input phoneme sequences444The state skipping structures in DurIAN [16] is not used here as it is not a necessary component for singing synthesis or conversion..

The purpose of alignment model is to generate frame aligned hidden states that will be used as input for autoregressive generation. Here, the output hidden sequence from encoder h1:N′ is first concatenated with speaker embedding ms and followed by a fully connect layer used for dimension reduction as

where ∨ indicates concatenation and ms indicates the embedding of speaker s. The output hidden states after dimension reduction layer will be expanded according to the duration of each phoneme as

where T is the total number of input audio frames. The state expansion is simply the replication of hidden states according to the provided phoneme duration. The duration of each phoneme is obtained from force alignments performed on input phonemes and acoustic features. The frame aligned hidden states e1:T is then concatenated with frame level f0, RMSE, and relative position of every frame inside each phone.

where f1:T and r1:T represents f0 and RMSE for each frame respectively. And p1:T is the position code of each frame.

The decoder is the same as in DurIAN, composed of two autoregressive RNN layers. Different from the attention mechanism used in the end-to-end systems, the attention context is computed from a small number of encoded hidden states that are aligned with the target frames, which reduce artifacts observed in the end-to-end system. We decode two frames per time step in this paper. The output from the decoder network y′1:T is passed through a post-CBHG [15] to improve the quality of predicted mel-spectrogram as

The whole process of our method is illustrated in Fig. 2. The training dataset contains a multi-speaker speech and singing corpus. For singing voice conversion task, the target speaker or singer should be included in the training data, while the source singing or singer to be converted doesn’t have to be seen in the training. The preprocess module mainly consists of two parts: the TDNN based phoneme alignment model [12] and the world vocoder [8]. The TDNN model is a component of a pre-trained general speech recognition model, which generates the phoneme sequence and its duration alignment from speech and singing data. The world vocoder is used to extract F0 which reflects the rhythm and melody of singing. Because the F0 envelope also determines the tone of each phone, so we use the non-tonal phones in our experiment. In addition, we also found that the RMSE can greatly improve the quality and stability of singing voice conversion. The input of DurIAN-4S is phoneme sequence, phoneme durations, f0, RMSE and speaker identity. The training target of DurIAN-4S is to reconstruct the mel-spectrogram. In the training stage, embeddings of speakers with speech samples and singing samples are all also optimized jointly.

After the model of DurIAN-4S is trained, it can be used to convert any singing to a target speaker’s voice. The process of singing voice conversion is that, we first extract the f0, phoneme duration, and RMSE from the preprocess module, and use these as input for singing generation. By choosing different speaker embedding during singing generation, we could produce singing with different voice. The generated mel-spectrogram from DurIAN-4S after conversion will be used for WaveRNN [5] model for waveform generation.

When conversion between male and female, the input F0 should be multiplied by a scalar ν as:

where xs is the source singing, xti is the target speaker t, mean is the average F0 of vowel phone in the audio. However, the pitch of one’s singing is usually higher than the pitch of speech from the same person and it is common to adjust the key of songs within a certain range for different singers. We could control the scalar ν to get a flexible conversion performance.

The training set contains the Tencent multi-speaker speech corpus (TSP) and the Tencent singing corpus (TSG). In TSP corpus, we choose 3 male speakers and 4 female speakers, each with 1.5 hours of data. The TSG corpus contains a total of 28 hours singing data recorded by 3 female singers. For singing voice conversion task, we choose source singing from a separate singing corpus, which will not be used in training. All the data has a sampling rate of 24K.

In our experiment, the dimensions of the phoneme embedding, speaker embedding, encoder CBHG module, attention layer are all 256. The decoder has 2 GRU layers with 256 dimension and the batch normalization is used in the encoder and post-net module. We use Adam optimizer and

0.001 initial learning rate with warm-up [4] schedule. There is a total of 250,000 steps with a batch size of 32 to converge the model. We found multi-speaker trained WaveRNN model will improve the synthesis stability in this singing voice conversion task.

We select 20 segments from two different songs from a separate singing corpus. Three male speakers and two female speakers from TSP corpus are selected as target speakers, and 1 singer from TSG corpus as target singer. We perform the experiments conduct an ablation study on the importance of using RMSE for singing voice conversion. For the timbre similarity evaluation, the subjects are asked to score a similarity of voice timbre between converted singing and target speaker’s normal speech.

The similarity evaluation results are shown in Table 1. The scale of MOS is set between 1 to 5 with 5 being the highest score. We first compare the effects of RMSE as additional input for singing voice conversion. And the results show that using RMSE improves both the quality and similarity significantly. We found that the energy information of each frame concatenated with F0 could help the model learning the pronunciation of long vowels. The energy of each frame indicates the loudness of pronunciation, helping the model to determine when vowels should stop properly.

The authors would like to thanks Chunlei Zhang, Dongxiang Xu and other members in the Tencent AI Lab team for providing suggestions on model structure and optimization.