We address the problem of semi-supervised domain adaptation of classification algorithms through deep Q-learning. The core idea is to consider the predictions of a source domain network on target domain data as noisy labels, and learn a policy to sample from this data so as to maximize classification accuracy on a small annotated reward partition of the target domain. Our experiments show that learned sampling policies construct labeled sets that improve accuracies of visual classifiers over baselines. 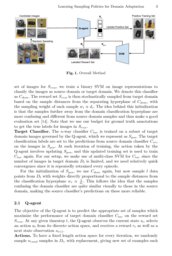 is a well-known drawback of supervised approaches to visual recognition tasks. In general, the success of supervised recognition models, both of the traditional and deep learning varieties, is restricted to data from the domain it was trained on

[2]. The common approach to handle this is fairly straightforward: pre-trained deep models perform well on new domains when they are fine-tuned with a sufficient amount of data from the new distribution. However, data for fine-tuning needs to be annotated. In many situations, labeling enough data for this approach to be effective is still prohibitively expensive.

Recent work on domain adaptation address this problem by aligning the features extracted from the network across the source and target domains, without any labeled target samples. The alignment typically involves minimizing some measure of distance between the source and target feature distributions, such as correlation distance

In this work, we explore the semi-supervised domain adaptation problem. We assume that we can collect data in the target domain, as well as annotate a small fraction of it, and we have a fixed budget for annotation. This has been extensively studied under the field of active learning [7, 8], where the goal is to obtain better predictive models than those trained on equal amounts of i.i.d. data by deciding which examples to annotate from a large unlabeled dataset. However, active learning methods are inherently designed for a target domain directly, and do not make use of the extensive amount of annotated data we have in the source domain.

We propose a reinforcement learning based formulation of the semi-supervised domain adaptation problem. In active learning, we need to choose a subset of the data to annotate and train from. We hypothesize that we could better use our annotation budget if we label a ’reward partition’, used to generate rewards for a deep Q-network. Knowledge from the source domain could be coupled with this Q-agent to potentially give us a large quantity of well-labeled data in the target domain, which could not be achieved independently through unsupervised domain adaptation or active learning.

Inspired by a similar approach for action recognition [9], we aim to use our Q-network to learn a policy for sampling from noisily labeled data in the target domain. A classifier trained on the source domain is used to generate these noisy annotations for the entire target dataset. The agent is rewarded for sampling data from the target domain, that when used to train a new classifier, leads to high accuracies on the annotated reward partition.

In this section, we describe the proposed method for semi-supervised domain adaptation for a n-way classification problem. The training data consists of images from two different domains, we will refer to these domains as Ds={(xis,yis)}Nsi=1 (source domain) and Dt={(xit)}Nti=1 (target domain). An overview of entire method is shown in Fig 1. It consists of the following components:

Source Classifier. For image feature representations, we make use of a ResNet-50 [11]

[12]. We choose this model for comparison to previous work [13]. In order to obtain fine-grained representations, we first fine-tune the network on source domain Ds in a supervised setting. We denote this source classifier as Csrc.

Domain Discriminator. We make a reward set Srew, that consists of sampled target domain images that is used to evaluate the performance of classifier and in-turn used for computing rewards for the Q-agent. In order to pick an appropriate set of images for Srew, we train a binary SVM on image representations to classify the images as source domain or target domain. We denote this classifier as Cdom. The reward set Srew

Cdom, with the sampling weight of each sample wi∝di. The idea behind this initialization is that the samples further away from the domain classification hyperplane are more confusing and different from source domain samples and thus make a good evaluation set [14]. Note that we use our budget for ground truth annotations to get the true labels for images in Srew.

Target Classifier. The n-way classifier Ctar is trained on a subset of target domain images governed by the Q-agent, which we represent as Spos. The target classification labels are set to the predictions from source domain classifier Csrc on the images in Spos. At each iteration of training, the action taken by the Q-agent involves updating Spos, and this updated training set is used to train Ctar again. For our setup, we make use of multi-class SVM for Ctar since the number of images in target domain Dt is limited, and we need relatively quick convergence since it is repeatedly retrained every episode.

For the initialization of Spos, we use Cdom again, but now sample l data points from Dt with weights directly proportional to the sample distances from the classification hyperplane wi∝1di. This follows the idea that the samples confusing the domain classifier are quite similar visually to those in the source domain, making the source classifier’s predictions on these more reliable.

The objective of the Q-agent is to predict the appropriate set of samples which maximize the performance of target domain classifier Ctar on the reward set Srew. At any given timestep t, the Q-agent observes the current state st, selects an action at from its discrete action space, and receives a reward rt as well as a next state observation st+1.

Actions. To have a fixed length action space for every iteration, we randomly sample ncand samples in Dt, with replacement, giving new set of examples each iteration we call the candidate set Scand. The Q-agent then chooses one of ncand+1 actions, which are either to:

State Representation. We formulate the states as a concatenation of two vectors, one dependent on the positive set and the other on the current candidate set. To get the first part of the state representation which shows the current distribution of examples in the positive set, we use a histogram of classifier confidences, obtained by using Ctar on the current Spos, We threshold the distribution over classes output by Ctar into discrete bins of equal width. This component of the state representation has a dimensionality of n×nbin (where n is the number of classes).

The second part of the state representation gives the agent a concise summary of the choices it has: for every image in Scand, we obtain the distribution of classifier confidences for each class as a confidence vector for that sample. The concatenation of all these vectors, each of which corresponds to a specific action that the Q-agent can take, has a dimensionality of n×ncand.

The entire state vector, which is the input to the Q-network, is a flattened concatenation of these two parts.

Rewards. The reward for the agent at any time stamp rt is determined by the relative change in performance of target domain classifier Ctar from the previous time stamp.

Q-Network. In the standard formulation of Q-learning, we use a function approximator with some weights w

Q-value of a state-action pair (s,a). We use a Dueling Deep Q-Network (DDQN) [15] as our function approximator. We define the advantage function relating the value and Q functions:

We implement the DDQN with two sequences (or streams) of fully connected layers. We subtract the average output over all actions from the advantage stream:

We additionally found that adding weight decay as a regularizer to the objective and using a sigmoid activation on the final predicted Q values significantly improved the optimization. Since the Q values are expectations of cumulative rewards under an optimal policy, the sigmoid activation bounds these values to the range [0,1]. This is a valid restriction based on our reward structure, as the maximum possible reward of an optimal policy is 1.

We evaluate our algorithm on Office-31 dataset [10]. It contains images from 3 domains, Amazon, Webcam and DSLR. Within each domain, images belong to 31 classes of everyday objects, with a fairly even class distribution. The dataset is imbalanced across domains, with 2,817 images in A, 795 images in W, and 498 images in D. With 3 domains, we have 6 possible transfer tasks, which address various forms of domain shift including resolution, lighting, viewpoint, background and dataset size.

The standard protocol for evaluation in unsupervised adaptation involves using all images in the source domain (with labels) and target domain (without labels) for training, and reporting performances on the entire target domain. We compare our results to other work based on the same feature extraction backbone (ResNet-50), by evaluating the final learned policy with the entire target domain dataset. The key difference between existing approaches and ours is that we use k=3 labels per class from the target domain in addition to the remaining unlabeled data during training.

Source Classifier. For each transfer task, we initially fine-tune our backbone network on the source domain for 30,000 iterations. We use SGD with an exponentially decaying learning rate starting at 0.003 and a batch size of 16. The 2048-dimensional pool5 feature vectors are used as representations for the images by the other components of our algorithm.

SVMs. For the domain discriminator Cdom, we train a binary SVM with a linear kernel using representations from the entire source domain as one class and target domain as the other. The target classifier Ctar is a multi-class linear kernel SVM trained in a one-vs-all manner every iteration. Both of these are implemented with the default parameters using the liblinear library [17]. We initialize Spos with l=100 samples for all 6 transfer tasks.

Q-agent. For our state representation, we set nbin of the histogram to 10 and ncand to 20. This leads a state space of dimensionality 930 and action space of size 21. For the value stream of our DDQN, we use a single hidden layer with as many units as the dimensionality of the state. The advantage stream consists of two hidden layers of 512 units each.

We use the Adam optimizer [18] with a learning rate of 0.001. We use an ϵ-greedy linear exploration policy, reducing the value of ϵ

from 1 to 0 over the 2,000 iterations of training, and train for a total of 20,000 iterations for each transfer task. We assign the weights of our online network to the target network every 10 iterations. Our models are implemented on Keras with a TensorFlow backend

We report our results in Table 1. As a baseline, we use the classifier trained on source domain and evaluate on target domain (without any domain adaptation) for all 6 transfer tasks. We additionally compare to the best reported results for unsupervised domain adaptation on this dataset [13].

We observe that the learned policies do better than baselines, but fail to close the gap towards existing state-of-the-art unsupervised adaptation methods.

We present a reinforcement learning based approach to learn sampling policies for the purpose of domain adaptation. Our method learns to select samples for training from the target domain that maximize performance on a reward set, and in-turn improve the overall classification accuracy in the target domain.

Unlike the existing state-of-the-art methods, we make use of fixed representations for both the source and target domain samples which hurts the performance of our method. In order to fix this, we plan to work on the integration of a labeler into the Q-agent which will be jointly optimized with the current sampler to tune better representations and less noisy labels for target domain. Another idea is to learn sampling policies using the representations obtained after performing unsupervised domain adaptation through existing feature alignment techniques.