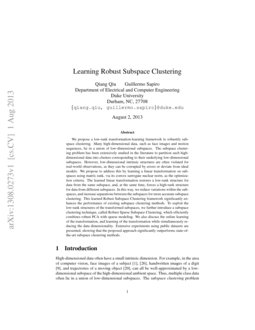 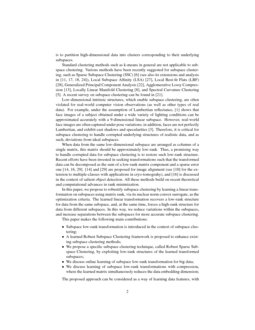 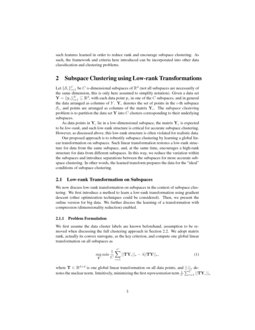 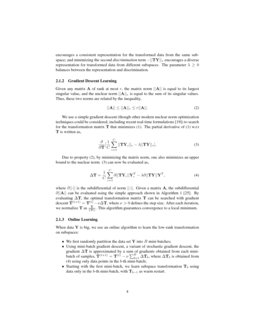 High-dimensional data often have a small intrinsic dimension. For example, in the area of computer vision, face images of a subject

Low-dimensional intrinsic structures, which enable subspace clustering, are often violated for real-world computer vision observations (as well as other types of real data). For example, under the assumption of Lambertian reflectance, [1] shows that face images of a subject obtained under a wide variety of lighting conditions can be approximated accurately with a 9-dimensional linear subspace. However, real-world face images are often captured under pose variations; in addition, faces are not perfectly Lambertian, and exhibit cast shadows and specularities [3]. Therefore, it is critical for subspace clustering to handle corrupted underlying structures of realistic data, and as such, deviations from ideal subspaces.

When data from the same low-dimensional subspace are arranged as columns of a single matrix, this matrix should be approximately low-rank. Thus, a promising way to handle corrupted data for subspace clustering is to restore such low-rank structure. Recent efforts have been invested in seeking transformations such that the transformed data can be decomposed as the sum of a low-rank matrix component and a sparse error one [14, 16, 29]. [14] and [29] are proposed for image alignment (see [10] for the extension to multiple-classes with applications in cryo-tomograhy), and [16] is discussed in the context of salient object detection. All these methods build on recent theoretical and computational advances in rank minimization.

In this paper, we propose to robustify subspace clustering by learning a linear transformation on subspaces using matrix rank, via its nuclear norm convex surrogate, as the optimization criteria. The learned linear transformation recovers a low-rank structure for data from the same subspace, and, at the same time, forces a high-rank structure for data from different subspaces. In this way, we reduce variations within the subspaces, and increase separations between the subspaces for more accurate subspace clustering.

Subspace low-rank transformation is introduced in the context of subspace clustering;

We discuss learning of subspace low-rank transformations with compression, where the learned matrix simultaneously reduces the data embedding dimension;

The proposed approach can be considered as a way of learning data features, with such features learned in order to reduce rank and encourage subspace clustering. As such, the framework and criteria here introduced can be incorporated into other data classification and clustering problems.

Let {Sc}Cc=1 be C n-dimensional subspaces of Rd (not all subspaces are necessarily of the same dimension, this is only here assumed to simplify notation). Given a data set Y={yi}Ni=1⊆Rd, with each data point yi in one of the C subspaces, and in general the data arranged as columns of Y. Yc denotes the set of points in the c-th subspace Sc, and points are arranged as columns of the matrix Yc. The subspace clustering problem is to partition the data set Y into C clusters corresponding to their underlying subspaces.

We first assume the data cluster labels are known beforehand, assumption to be removed when discussing the full clustering approach in Section 2.2. We adopt matrix rank, actually its convex surrogate, as the key criterion, and compute one global linear transformation on all subspaces as

Given any matrix A of rank at most r, the matrix norm ||A||

is equal to its largest singular value, and the nuclear norm

||A||∗ is equal to the sum of its singular values. Thus, these two norms are related by the inequality,

We use a simple gradient descent (though other modern nuclear norm optimization techniques could be considered, including recent real-time formulations [19]) to search for the transformation matrix T that minimizes (1). The partial derivative of (1) w.r.t T is written as,

Due to property (2), by minimizing the matrix norm, one also minimizes an upper bound to the nuclear norm. (3) can now be evaluated as,

where ∂||⋅|| is the subdifferential of norm ||⋅||. Given a matrix A, the subdifferential ∂||A|| can be evaluated using the simple approach shown in Algorithm 1 [25]. By evaluating ΔT, the optimal transformation matrix T can be searched with gradient descent T(t+1)=T(t)−νΔT, where ν>0 defines the step size. After each iteration, we normalize T as T||T||. This algorithm guarantees convergence to a local minimum.

When data Y is big, we use an online algorithm to learn the low-rank transformation on subspaces:

We first randomly partition the data set Y into B mini-batches;

Starting with the first mini-batch, we learn subspace transformation Tb using data only in the b-th mini-batch, with Tb−1 as warm restart.

We now first present a general procedure to enhance the performance of existing subspace clustering methods in the literature. Then we further propose a specific subspace clustering technique to fully exploit the low-rank structure of (learned) transformed subspaces.

The data labeling (clustering) is not known beforehand in practice. The proposed algorithm, Algorithm 2, iterates between two stages: In the first assignment stage, we obtain clusters using any subspace clustering methods, e.g., SSC [6], LSA [27], LBF [28]. In particular, in this paper we often use the new technique introduced in Section 2.2.2. In the second update stage, based on the current clustering result, we compute the optimal subspace transformation that minimizes (1). The algorithm is repeated until the clustering assignments stop changing. Algorithm 2 is a general procedure to enhance the performance of any subspace clustering methods.

Though Algorithm 2 can adopt any subspace clustering methods, to fully exploit the low-rank structure of transformed subspaces, we further propose the following specific technique for the clustering step in the RSC framework, called Robust Sparse Subspace Clustering (R-SSC):

For the transformed subspaces, we first recover their low-rank representation L by performing a low-rank decomposition (5), e.g., using RPCA [3],

Each transformed point Tyi is then sparsely decomposed over L,

As the optimization process for (6) is computationally demanding, we further simplify (6) using Local Linear Embedding [15], [23]. Each transformed point Tyi is represented using its K Nearest Neighbors (NN) in L, which are denoted as Li,

Let Li be Tyi centered through ¯Li=Li−1TyTi. xi can then be obtained in closed form,

where x=A∖B solves the system of linear equations Ax=B. As suggested in [15], if the correlation matrix ¯Li¯LTi is nearly singular, it can be conditioned by adding a small multiple of the identity matrix.

-sized vector with no more than

being the total number of data points). The pairwise affinity matrix is now defined as

and the subspace clustering is obtained using spectral clustering

Based on experimental results presented in Section 3, the proposed R-SSC outperforms state-of-the-art subspace clustering techniques, both in accuracy and running time, e.g., about 500 times faster than the original SSC using the implementation provided in [6]. The accuracy is even further enhanced when R-SCC is used as an internal step of RSC.

This section presents experimental evaluations on three public datasets (standard benchmarks): the MNIST handwritten digit dataset, the Extended YaleB face dataset [7], and the CMU Motion Capture (Mocap) dataset at http://mocap.cs.cmu.edu. The MNIST dataset consists of 8-bit grayscale handwritten digit images of “0” through “9” and 7000 examples for each class. The Extended YaleB face dataset contains 38 subjects with near frontal pose under 64 lighting conditions. All the images are resized to 16×16. The Mocap dataset contains measurements of 42 (non-imaging) sensors that capture the motions of 149 subjects performing multiple actions.

Subspace clustering methods compared are SSC [6], LSA [27], and LBF [28]. Based on the studies in [6], [21] and [28], these three methods exhibit state-of-the-art subspace clustering performance. We adopt the LSA and SSC implementations provided in [6] from http://www.vision.jhu.edu/code/, and the LBF implementation provided in [28] from http://www.ima.umn.edu/~zhang620/lbf/.

We conduct the first set of experiments on a subset of the MNIST dataset. We adopt a similar setup as described in [28], using the same sets of 2 or 3 digits, and randomly choose 200 images for each digit. We do not perform dimension reduction to preprocess the data as [28]. We set the sparsity value K=6 for R-SSC, and perform 100 iterations for the gradient descent updates while learning the transformation on subspaces.

Fig. 1 shows the misclassification rate (e) and running time (t) on clustering subspaces of two digits. The misclassification rate is the ratio of misclassified points to the total number of points. For visualization purposes, the data are plotted with the dimension reduced to 2 using Laplacian Eigenmaps [2]. Different clusters are represented by different colors and the ground truth is plotted using the true cluster labels. The proposed R-SSC outperforms state-of-the-art methods, both in terms of clustering accuracy and running time. The clustering error of R-SSC is further reduced using the proposed RSC framework in Algorithm 2 through the learned low-rank subspace transformation. The clustering results converge after about 3 RSC iterations. After convergence, the learned subspace transformation not only recovers a low-rank structure for data from the same subspace, but also increases the separations between the subspaces for more accurate clustering.

In this set of experiments, we use digits {1, 2} from the MNIST dataset. We select 1000 images for each digit, and randomly partition them into 5 mini-batches. We first perform one iteration of RSC in Algorithm 2 over all selected data with various λ values. As shown in Fig. (a)a, we always observe empirical convergence for subspace transformation learning in (1).

can be estimated through cross-validations. In our experiments, we always choose

λ=1C, where C is the number of subspaces.

Starting with the first mini-batch, we then perform one iteration of RSC over one mini-batch a time, with the subspace transformation learned from the previous mini-batch as warm restart. We adopt here 100 iterations for the gradient descent updates. As shown in Fig. (b)b, we observe similar empirical convergence for online transformation learning. To converge to the same objective function value, it takes 131.76 sec. for online learning and 700.27 sec. for batch learning.

In the Extended YaleB dataset, each of the 38 subjects is imaged under 64 lighting conditions, shown in Fig. (a)a. We conduct the face clustering experiments on the first 9 subjects shown in Fig. (b)b. We set the sparsity value K=10 for R-SSC, and perform 100 iterations for the gradient descent updates while learning the transformation. Fig. 5 shows error rate (e) and running time (t) on clustering subspaces of 2 subjects, 3 subjects, and 9 subjects. The proposed R-SSC outperforms state-of-the-art methods for both accuracy and running time. Using the proposed RSC framework (that is, learning the transform), the misclassification errors of R-SSC are further reduced significantly, for example, from 42.06% to 0% for subjects {1,2}, and from 67.37% to 4.94% for the 9 subjects.

In the Mocap dataset, we consider the trial 2 sequence performed by subject 86, which consists of eight different actions shown in Fig. 6. As discussed in [18], the data from each action lie in a low-dimensional subspace. We achieve temporal motion segmentation by clustering sensor measurements corresponding to different actions. We set the sparsity value K=8 for R-SSC and downsample the sequence by a factor 2 as [18]. As shown in Table 1, the proposed approach again significantly outperforms state-of-the-art clustering methods for motion segmentation.

3.4 Discussion on the Size of the Transformation Matrix T

In the experiments presented above, images are resized to 16×16. Thus, the learned subspace transformation T is of size 256×256. If we learn a transformation of size r×256 with r<256, we enable dimension reduction while performing subspace transformation. Through experiments, we notice that the peak clustering accuracy is usually obtained when r is smaller than the dimension of the ambient space. For example, in Fig. 5, through exhaustive search for the optimal r, we observe the misclassification rate reduced from 2.38% to 0% for subjects {2, 3} at r=96, and from 4.23% to 0% for subjects {4, 5, 6} at r=40. As discussed before, this provides a framework to sense for clustering and classification, connecting the work here presented with the extensive literature on compressed sensing, and in particular for sensing design, e.g., [4]. We plan to study in detail the optimal size of the learned transformation matrix for subspace clustering and further investigate such connections with compressed sensing.