Learning rate schedule can significantly affect generalization performance in modern neural networks, but the reasons for this are not yet understood. Li-Wei-Ma (2019) recently proved this behavior can exist in a simplified non-convex neural-network setting. In this note, we show that this phenomenon can exist even for convex learning problems – in particular, linear regression in 2 dimensions. We give a toy convex problem where learning rate annealing (large initial learning rate, followed by small learning rate) can lead gradient descent to minima with provably better generalization than using a small learning rate throughout. In our case, this occurs due to a combination of the mismatch between the test and train loss landscapes, and early-stopping. 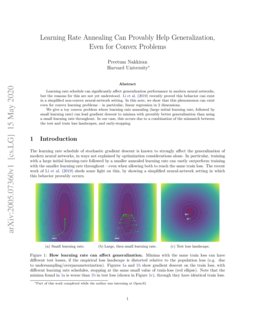 The learning rate schedule of stochastic gradient descent is known to strongly affect the generalization of modern neural networks, in ways not explained by optimization considerations alone. In particular, training with a large initial learning-rate followed by a smaller annealed learning rate can vastly outperform training with the smaller learning rate throughout – even when allowing both to reach the same train loss. The recent work of

li2019explaining sheds some light on this, by showing a simplified neural-network setting in which this behavior provably occurs.

It may be conjectured that non-convexity is crucial for learning-rate schedule to affect generalization (for example, because strongly-convex objectives have unique global minima). However, we show this behavior can appear even in strongly-convex learning problems. The key insight is that although strongly-convex problems have a unique minima, early-stopping breaks this uniqueness: there is a set of minima with the same train loss \eps. And these minima can have different generalization properties when the train loss surface does not closely approximate the test loss surface. In our setting, a large learning-rate prevents gradient descent from optimizing along high-curvature directions, and thus effectively regularizes against directions that are high-curvature in the train set, but low-curvature on the true distribution (see Figure 1).

Technically, we model a small learning rate by considering gradient flow. Then we compare the following optimizers:

We show that for a particular linear regression problem, if we run both (A) and (B) until reaching the same \eps>0

train loss, then with probability

3/4 over the train samples, the test loss of (A) is twice that of (B). That is, starting with a large learning rate and then annealing to an infinitesimally small one helps generalization significantly.

This work was inspired by li2019explaining, which gives a certain simplified neural-network setting in which learning-rate schedule provably affects generalization, despite performing identically with respect to optimization. The mechanisms and intuitions in li2019explaining

depend crucially on non-convexity of the objective. In contrast, in this work we provide complementary results, by showing that this behavior can occur even in convex models due to the interaction between early-stopping and estimation error. Our work is not incompatible with

li2019explaining; indeed, the true mechanisms behind generalization in real neural networks may involve both of these factors (among others).

There are many empirical and theoretical works attempting to understand the effect of learning-rate in deep learning, which we briefly describe here. Several recent works study the effect of learning rate by considering properties (e.g. curvature) of the loss landscape, finding that different learning rate schedules can lead SGD to regions in parameter space with different local geometry (jastrzebski2020break; lewkowycz2020large). This fits more broadly into a study of the implicit bias of SGD. For example, there is debate on whether generalization is connected to “sharpness” of the minima (e.g. hochreiter1997long; keskar2016large; dinh2017sharp). The effect of learning-rate is also often also studied alongside the effect of batch-size, since the optimal choice of these two parameters is coupled in practice (krizhevsky2014one; goyal2017accurate; smith2017don). Several works suggest that the stochasticity of SGD is crucial to the effect of learning-rate, in that different learning rates lead to different stochastic dynamics, with different generalization behavior (smith2017bayesian; mandt2017stochastic; hoffer2017train; mccandlish2018empirical; welling2011bayesian; li2019explaining). In particular, it may be the case that the stochasticity in the gradient estimates of SGD acts as an effective “regularizer” at high learning rates. This aspect is not explicitly present in our work, and is an interesting area for future theoretical and empirical study.

The main idea is illustrated in the following linear regression problem, as visualized in Figure 1. Consider the data distribution D over (x,y)∈\R2\x\R defined as:

for some ground-truth β∗∈\R2. We want to learn a linear model ^y(x):=⟨β,x⟩ with small mean-squared-error on the population distribution. Specifically, for model parameters β=(β1,β2)∈\R2, the population loss is

We want to approximate β∗=\argminβLD(β). Suppose we try to find this minima by drawing n samples {xi,yi} from D, and performing gradient descent on the empirical loss:

starting at β=0, and stopping when ^Ln≤\eps for some small \eps.

The key point is that although the global minima of LD and ^Ln are identical, their level sets are not: not all points of small train loss ^Ln(β) have identical test loss LD(β). To see this, refer to Equation 1, and consider two different ways that train loss ^Ln=\eps could be achieved. In the “good” situation, term (A) in Equation 1 is \eps, and term (B) is 0. In the “bad” situation, term (A) is 0 and term (B) is \eps. These two cases have test losses which differ by a factor of two, since terms are re-weighted differently in the test loss (Equation 2). This is summarized in the below table.

Now, if our optimizer stops at train loss \eps, it will pick one of the points in {β:^Ln(β)=\eps}. We see from the above that some of these points are twice as bad as others.

Notice that gradient flow on ^Ln (Equation 1) will optimize twice as fast along the β1 coordinate compared to β2. The gradient flow dynamics of the residual (β−β∗) are:

However, gradient descent with a large step size can oscillate on the β1 coordinate, and achieve low train loss by optimizing β2 instead. Then in the second stage, once the learning-rate is annealed, gradient descent will optimize on β1 while keeping the β2 coordinate small. This will lead to a minima closer to the “Good” solution, where (β2−β∗2)≈0. These dynamics are visualized in Figure 1.

This example is formalized in the following claim. The proof is straightforward, and included in Appendix A. For all 0<α<1, there exists a distribution D over (x,y)∈\R2\x\R and a learning-rate η>0 (the “large” learning-rate) such that for all 0<\eps<1, the following holds. With probability 3/4 over n=3 samples:

Moreover, with the remaining 1/4 probability, the samples will be such that gradient flow and annealed gradient descent behave identically:

Limitations. Our example is nevertheless a toy example, and does not exhibit some features of real networks. For example, our setting has only one basin of attraction. But real networks have many basins of attraction, and there is evidence that a high initial learning rate influences the choice of basin (e.g. li2019explaining; jastrzebski2020break). It remains an important open question to understand the effect of learning rate in deep learning.

We thank John Schulman for a discussion around learning rates that led to wondering if this can occur in convex problems. We thank Aditya Ramesh, Ilya Sutskever, and Gal Kaplun for helpful comments on presentation, and Jacob Steinhardt for technical discussions refining these results.

In this section, we state and prove Claim 2, along with a mild generalization of the setting via Lemma A.2.

a.1 Notation and Preliminaries

Let GFβ0(L,\eps) be the function which optimizes train loss L from initial point β0, until the train loss reaches early-stopping threshold \eps, and then outputs the resulting parameters.

For n samples, let X∈\Rn\xd be the design matrix of samples. Let ΣX=\Ex,y∼D[xxT] be the population covariance and let ^ΣX=1nXTX be the emperical covariance.

We assume throughout that ΣX and ^ΣX are simultaneously diagonalizable:

for diagonal Λ=diag(λi),S=diag(γi) and orthonormal U. Further, assume without loss of generality that ^ΣX≻0 (if ^ΣX is not full rank, we can restrict attention to its image).

We consider optimizing the the train loss:

Observe that the optimal population loss for a point with \eps train loss is:

Similarly, the worst population loss for a point with \eps train loss is:

Now, the gradient flow dynamics on the train loss is:

Switching to coordinates δ:=UT(β−β∗), these dynamics are equivalent to:

The empirical and population losses in these coordinates can be written as:

And the trajectory of gradient flow, from initialization δ(0)∈\Rd, is

With this setup, we now state and prove the following main lemma, characterizing the behavior of gradient flow and gradient descent for a given sample covariance.

be as above. Let eigenvalues be ordered according to

The proof idea is to show that gradient flow must run for some time T in order to reach \eps train loss – and since higher-eigenvalues optimize faster, most of the train loss will be due to contributions from the “small” coordinates S.

Let T be the stopping-time of gradient flow, such that ^L(δ(T))=\eps. We can lower-bound the time T required to reach \eps train loss as:

Decompose the train loss as:

This lower-bounds the population loss as desired.

For annealed gradient descent, the proof idea is: set the learning-rate such that in the gradient descent stage, the optimizer oscillates on the first (highest-curvature) coordinate δ1, and optimizes until the remaining coordinates are ≈0. Then, in the gradient flow stage, it optimizes on the first coordinate until hitting the target train loss of \eps. Thus, at completion most of the train loss will be due to contributions from the “large” first coordinate.

Specifically, the gradient descent dynamics with stepsize η is:

Recall, the population and empirical losses are:

By Equation 7, after K steps of gradient descent, the contribution to the population loss from the coordinates i∈Q is small:

By Condition 1 of the Lemma, the train loss is still not below \eps after the gradient descent stage, since the first coordinate did not optimize: δ1(0)=±δ1(0). We now run gradient flow, stopping at time T∈\R when the train loss is \eps. At this point, we have

As a corollary of Lemma A.2, we recover the 2-dimensional of Claim 2.

With probability 3/4, two of the three samples will have the same value of x. In this case, the sample covariance will be equal (up to reordering of coordinates) to

This satisfies the conditions of Lemma A.2, taking the “small” set of eigenvalue indices to be S={2}. Thus, the conclusion follows by Lemma A.2.

With probability 1/4, all the samples will all be identical, and in particular share the same value of x. Here, the optimization trajectory will be 1-dimensional, and it is easy to see that gradient flow and annealed gradient descent will reach identical minima. ∎