We consider the problem of online learning of optimal control for repeatedly operated systems in the presence of parametric uncertainty. During each round of operation, environment selects system parameters according to a fixed but unknown probability distribution. These parameters govern the dynamics of a plant. An agent chooses a control input to the plant and is then revealed the cost of the choice. In this setting, we design an agent that personalizes the control input to this plant taking into account the stochasticity involved. We demonstrate the effectiveness of our approach on a simulated system. 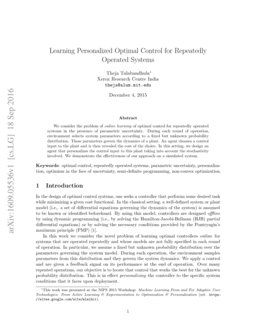 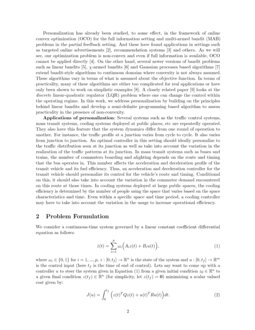 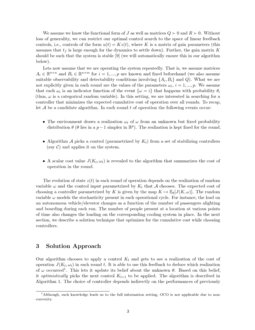 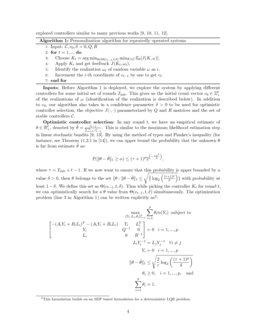 A New Algorithm for the LQR Problem with Partially Unknown Dynamics

Power plant is a complex and nonstationary system for which the traditio...
Rui Xu, et al. ∙

This work explores a link between chaotic signals and the selection of c...
S. F. Yapur, et al. ∙

Automation of cranes can have a direct impact on the productivity of con...
Michele Ambrosino, et al. ∙

Nonlinear input design as optimal control of a Hamiltonian system

Anticipating the Long-Term Effect of Online Learning in Control

In the design of optimal control systems, one seeks a controller that performs some desired task while minimizing a given cost functional. In the classical setting, a well-defined system or plant model (i.e,. a set of differential equations governing the dynamics of the system) is assumed to be known or identified beforehand. By using this model, controllers are designed offline

by using dynamic programming (i.e., by solving the Hamilton-Jacobi-Bellman (HJB) partial differential equations) or by solving the necessary conditions provided by the Pontryagin’s maximum principle (PMP)

In this work we consider the novel problem of learning optimal controllers online for systems that are operated repeatedly and whose models are not fully specified in each round of operation. In particular, we assume a fixed but unknown probability distribution over the parameters governing the system model. During each operation, the environment samples parameters from this distribution and they govern the system dynamics. We apply a control and are given a feedback signal on its performance at the end of operation. Over many repeated operations, our objective is to locate that control that works the best for the unknown probability distribution. This is in effect personalizing the controller to the specific system conditions that it faces upon deployment.

Personalization has already been studied, to some effect, in the framework of online convex optimization (OCO) for the full information setting and multi-armed bandit (MAB) problems in the partial feedback setting. And these have found applications in settings such as targeted online advertisements [2], recommendation systems [3] and others. As we will see, our optimization problem is non-convex and even if full information is available, OCO cannot be applied directly [4]. On the other hand, several newer versions of bandit problems such as linear bandits [5], χ-armed bandits [6] and Gaussian processes based algorithms [7] extend bandit-style algorithms to continuous domains where convexity is not always assumed. These algorithms vary in terms of what is assumed about the objective function. In terms of practicality, many of these algorithms are either too complicated for real applications or have only been shown to work on simplistic examples [8]. A closely related paper [9] looks at the discrete linear-quadratic regulator (LQR) problem where one can change the control within the operating regime. In this work, we address personalization by building on the principles behind linear bandits and develop a semi-definite programming based algorithm to assess practicality in the presence of non-convexity.

Applications of personalization: Several systems such as the traffic control systems, mass transit systems, cooling systems deployed at public places, etc are repeatedly operated. They also have this feature that the system dynamics differ from one round of operation to another. For instance, the traffic profile at a junction varies from cycle to cycle. It also varies from junction to junction. An optimal controller in this setting should ideally personalize to the traffic distribution seen at its junction as well as take into account the variation in the realization of the traffic patterns at its junction. In mass transit systems such as buses and trains, the number of commuters boarding and alighting depends on the route and timing that the bus operates in. This number affects the acceleration and deceleration profile of the transit vehicle and its fuel efficiency. Thus, an acceleration and deceleration controller for the transit vehicle should personalize its control for the vehicle’s route and timing. Conditional on this, it should also take into account the variation in the commuter demand encountered on this route at those times. In cooling systems deployed at large public spaces, the cooling efficiency is determined by the number of people using the space that varies based on the space characteristics and time. Even within a specific space and time period, a cooling controller may have to take into account the variation in the usage to increase operational efficiency.

We consider a continuous-time system governed by a linear constant coefficient differential equation as follows:

where ωi∈{0,1} for i=1,...,p, z:[0,tf]→Rn is the state of the system and u:[0,tf]→Rm is the control input (here tf is the time of end of control). Lets say want to come up with a controller u to steer the system given in Equation (1) from a given initial condition z0∈Rn to a given final condition z(tf)∈Rn (for simplicity, let z(tf)=0) minimizing a scalar valued cost given by:

We assume we know the functional form of J as well as matrices Q≻0 and R≻0. Without loss of generality, we can restrict our optimal control search to the space of linear feedback controls, i.e., controls of the form u(t)=Kz(t), where K is a matrix of gain parameters (this assumes that tf is large enough for the dynamics to settle down). Further, the gain matrix K should be such that the system is stable [9] (we will automatically ensure this in our algorithm below).

Lets now assume that we are operating the system repeatedly. That is, we assume matrices Ai∈Rn×n and Bi∈Rn×m for i=1,...,p are known and fixed beforehand (we also assume suitable observability and detectability conditions involving {Ai,Bi} and Q). What we are not explicitly given in each round are the values of the parameters ωi, i=1,...,p. We assume that each ωi is an indicator function of the event {ω=i} that happens with probability θi (thus, ω

is a categorical random variable). In this setting, we are interested in searching for a controller that minimizes the expected cumulative cost of operation over all rounds. To recap, let

A be a candidate algorithm. In each round t of operation the following events occur:

The evolution of state z(t) in each round of operation depends on the realization of random variable ω and the control input parametrized by Kt that A chooses. The expected cost of choosing a controller parametrized by K is given by the map K↦Eθ[J(K,ω)]. The random variable ω models the stochasticity present in each operational cycle. For instance, the load on an autonomous vehicle/elevator changes as a function of the number of passengers alighting and boarding during each run. The number of people present at a location at various points of time also changes the loading on the corresponding cooling system in place. In the next section, we describe a solution technique that optimizes for the cumulative cost while choosing controllers.

Our algorithm chooses to apply a control Kt and gets to see a realization of the cost of operation J(Kt,ωt) in each round t. It is able to use this feedback to deduce which realization of ω occurred111Although, such knowledge leads us to the full information setting, OCO is not applicable due to non-convexity.. This lets it update its belief about the unknown θ. Based on this belief, it optimistically picks the next control Kt+1 to be applied. The algorithm is described in Algorithm 1. The choice of controller depends indirectly on the performances of previously explored controllers similar to many previous works [9, 10, 11, 12].

Inputs: Before Algorithm 1 is deployed, we explore the system by applying different controllers for some initial set of rounds Tinit

. This gives us the initial count vector

c0∈Zp+ of the realizations of ω (identification of the realization is described below). In addition to c0, our algorithm also takes in a confidence parameter δ>0 to be used for optimistic controller selection, the objective J(⋅,⋅) parameterized by Q and R matrices and the set of stable controllers C.

Optimistic controller selection: In any round t

, we have an empirical estimate of

θ∈Rp+, denoted by ^θ=ct−1∑pi=1cit−1. This is similar to the maximum likelihood estimation step in linear stochastic bandits [9, 13]. By using the method of types and Pinsker’s inequality (for instance, see Theorem 11.2.1 in [14]), we can upper bound the probability that the unknown θ is far from estimate ^θ as:

where τ=Tinit+t−1. If we now want to ensure that this probability is upper bounded by a value δ>0, then θ belongs to the set {θ:∥θ−^θ∥1≤√2τlog2((τ+1)pδ)} with probability at least 1−δ. We define this set as Θ(ct−1,t,δ). Thus while picking the controller Kt for round t, we can optimistically search for a θ value from Θ(ct−1,t,δ) simultaneously. The optimization problem (line 3 in Algorithm 1) can be written explicitly as222This formulation builds on an SDP based formulation for a deterministic LQR problem.:

This optimization problem is non-convex

and we devise some heuristics (alternating minimization over

Identification of the realization: In our setting, we have p possible realizations of the system {Ai,Bi},i=1,...,p. If we are given feedback J(Kt,ωt) in round t, we can solve the following optimization problem with each of the p pairs and the fixed control Kt to get p cost values Ji(Kt),i=1,...,p and deduce the realization ωt:

Realization ωt is equal to argmini=1,...,p|J(Kt,ωt)−Ji(Kt)| (ties broken arbitrarily). The above non-convex optimization problem can be transformed into a semi-definite program and solved relatively easily when compared to the optimistic optimization problem for control selection formulated earlier.

An experts based alternative: An alternative algorithm that is intuitive but suboptimal is as follows. We can compute the optimal controllers K∗i corresponding to each system model {Ai,Bi},i=1,...,p beforehand. We can then treat each of these as experts and apply the randomized weighted majority algorithm [15]. We can do this because we can get full information in each round and not just the cost of the controller we picked. But note that the regret bound does not hold because the optimal controller need not belong to the set of experts {K∗i}pi=1. We want to find a controller, not necessarily optimal for any of the system models {Ai,Bi},i=1,...,p, that minimizes the expected cost of operation over multiple rounds while minimizing regret. This is what is achieved by Algorithm 1.

In this work, we proposed an approach to personalize control systems to the operating environment in the setting where there is repetition of operation and a certain type of stochasticity is present. In particular, we proposed an algorithm that uses the optimism under uncertainty principle. This way of personalization is very useful in reducing operational costs in a variety of applications (for instance, minimizing energy consumption in various transportation and cooling system applications).

This is still a work in progress and investigating bounds on regret for this setting is of immediate interest. It is also interesting to explore better algorithms to deal with the non-convex optimization problem that needs to be solved in each round. Also, the uncertainty model can be extended to the setting where there is a Dirichlet prior on the the unknown probability distribution θ. Extensions to classes of non-linear and noisy dynamical systems are also worth pursuing.

The author would like to thank Deepak Patil for initial discussions on this topic.