We consider learning problems of an intuitive and concise preference model, called lexicographic preference lists (LP-lists). Given a set of examples that are pairwise ordinal preferences over a universe of objects built of attributes of discrete values, we want to learn (1) an optimal LP-list that decides the maximum number of these examples, or (2) a near-optimal LP-list that decides as many examples as it can. To this end, we introduce a dynamic programming based algorithm and a genetic algorithm for these two learning problems, respectively. Furthermore, we empirically demonstrate that the sub-optimal models computed by the genetic algorithm very well approximate the de facto optimal models computed by our dynamic programming based algorithm, and that the genetic algorithm outperforms the baseline greedy heuristic with higher accuracy predicting new preferences. 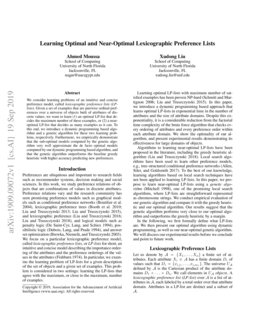 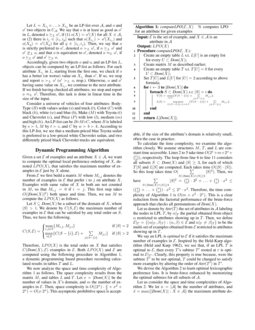 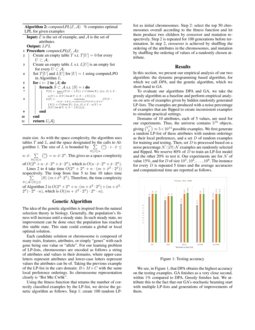 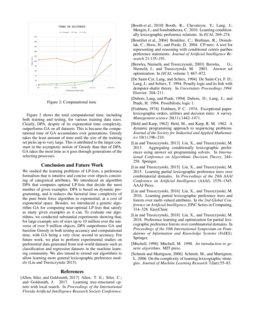 In this paper, we perform an experimental study of optimal recombination...
A. V. Eremeev, et al. ∙

Genetic Algorithm for a class of Knapsack Problems

The 0/1 knapsack problem is weakly NP-hard in that there exist pseudo-po...
Shalin Shah, et al. ∙

GKNAP: A Java and C++ package for solving the multidimensional knapsack problem

The literature on ranking from ordinal data is vast, and there are sever...
Kush Bhatia, et al. ∙

The problem of allocating students to supervisors for the development of...
Victor Sanchez-Anguix, et al. ∙

We describe a model for multi-target tracking based on associating colle...
Shaofei Wang, et al. ∙

Learning optimal LP-lists with maximum number of satisfied examples has been proven NP-hard [14, 11]. In this paper, we introduce a dynamic programming based approach that learns optimal LP-lists in exponential time in the number of attributes and the size of attribute domains. Despite this exponentiality, it is a considerable reduction from the factorial time complexity of the brute force algorithm that checks every ordering of attributes and every preference order within each attribute domain. We show the optimality of our algorithm, and present experimental results demonstrating its effectiveness for large domains of objects.

In the following, we first formally define what LP-lists are. We then present our optimal algorithm using dynamic programming, as well as our near-optimal genetic algorithm. We will discuss our experimental results before we conclude and point to future work.

Let us denote by A={X1,…,Xn} a finite set of attributes. Each attribute Xi∈A has a finite domain Di of values such that Di={xi,1,…,xi,m1}. The universe UA defined by A is the Cartesian product of the attribute domains D1×…×Dn. We call elements in UA objects. A lexicographic preference list (LP-list) over A is a list of attributes in A, each labeled by a total order over that attribute domain. Attributes in a LP-list are distinct and a subset of A.

Accordingly, given two objects o and o, and an LP-list L, objects can be compared by an LP-list as follows. For each attribute Xij in L, starting from the first one, we check if o has a better (or worse) value on Xij than o′. If so, we stop and report o≻Lo′ (o′≻Lo, resp.). Otherwise, o and o′ having same value on Xij, we continue to the next attribute. If we finish having checked all attributes, we stop and report o≈Lo′. Therefore, this task is done in linear time in the size of the input.

Consider a universe of vehicles of four attributes: BodyType (B) with values sedan (s) and truck (t), Color (C) with black (k), white (w) and blue (b), Make (M) with Toyota (t) and Chevrolet (c), and Price (P) with low (l), medium (m) and high (h). An LP-list can be B▹M▹C, where B is labeled by s≻t, M by t≻c, and C by w≻b≻k. According to this LP-list, we see that a medium-priced blue Toyota sedan is preferred to a low-priced white Chevrolet sedan, and two differently priced black Chevrolet trucks are equivalent.

Given a set E of examples and an attribute X∈A, we want to compute the optimal local preference ordering of X, denoted LPO(X), that satisfies the maximum number of examples in E just by X alone.

From E we first build a matrix M where Mi,j denotes the number of examples in E that prefer i to j on attribute X. Examples with same value of X in both are not counted in M, so that Mi,j=0 if i=j. This first step takes O(|Dom(X)|2) both space and time. Then, we use M to compute the LPO(X) as follows.

Let S⊆Dom(X) be a subset of the domain of X, where |S|>1. We denote by C(S,E) the maximum number of examples in E that can be satisfied by any total order on S. Thus, we have the following.

Therefore, LPO(X) is the total order on X that satisfies C(Dom(X),E) examples in E. Both LPO(X) and E are computed using the following procedure in Algorithm 1, a dynamic programming based procedure recording calculated results in tables T and L.

We now analyze the space and time complexity of Algorithm 1 as follows. The space complexity results from the matrix M, and tables L and T. Let x=|Dom(X)| be the number of values in X’s domain, and m the number of examples in E. Then, space complexity is O((2x)⋅x2+x2+2x)=O(x⋅2x). This asymptotic prohibitive space is acceptable, if the size of the attribute’s domain is relatively small, often the case in practice.

We say an LPL is optimal to E if it satisfies the maximum number of examples in E. Inspired by the Held-Karp algorithm [8], we see that, if an LPL T is optimal to E, then every T’s subtree T′ rooted at r is optimal to E|T′. Clearly, this property is true because, were the subtree T′ to be not optimal, T could be changed to satisfy more examples by altering the order of Attr(T′) in T′.

We devise the Algorithm 2 to learn optimal lexicographic preference lists. It is brute-force enhanced by memorizing the optimal subtrees for all subsets of A.

The idea of the genetic algorithm is inspired from the natural selection theory in biology. Generally, the population’s fitness will increase until a steady state. In such steady state, no improvement can be done once the population has reached this stable state. This state could contain a global or local optimal solution.

Each candidate solution or chromosome is composed of many traits, features, attributes, or simply “genes” with each gene being one value or “allele”. For our learning problem of LP-lists, chromosomes are encoded as follows a string of attributes and values in their domains, where upper-case letters represent attributes and lower-case letters represent values the attributes can be of. Taking the previous example of the LP-list in the cars domain: B▹M▹C with the same local preference orderings. Its chromosome representation clearly is “Bst Mtc Cwbk”.

Using the fitness function that returns the number of correctly classified examples by the LP-list, we devise the genetic algorithm as follows. Step 1: create 100 random LP-list as initial chromosomes. Step 2: select the top 50 chromosomes overall according to the fitness function and let them produce two children by crossover and mutation respectively. Step 2 is repeated for 100 generations before termination. In step 2, crossover is achieved by shuffling the ordering of the attributes in the chromosomes, and mutation by shuffling the ordering of values of a randomly chosen attribute.

In this section, we present our empirical analysis of our two algorithm: the dynamic programming based algorithm, for which we call DPA, and the genetic algorithm, which we short-hand to GA.

To evaluate our algorithms DPA and GA, we take the greedy algorithm as a baseline and perform empirical analysis on sets of examples given by hidden randomly generated LP-lists. The examples are produced with a noise percentage of examples that are flipped to create inconsistent examples to simulate practical settings.

Domains of 10 attributes, each of 5 values, are used for our experiments. Thus, the universe contains 510 objects, giving (5102)≈5×1013 possible examples. We first generate a random LP-list of these attributes with random orderings as their local preferences, and a set D of random examples for training and testing. Then, set D is processed based on a noise percentage N: |D|⋅N examples are randomly selected and flipped. We reserve 80% of D to train an LP-list model and the other 20% to test it. Our experiments are for N of value 15%, and for D of size 103,104,…,106. The instance for every D is repeated 5 times and the average accuracies and computational time are reported as follows.

We see, in Figure 1, that DPA obtains the highest accuracy on the testing examples. GA finishes as a very close second, within 1% compared to DPA. Greedy finishes last. We attribute this to the fact that our GA’s stochastic beaming start with multiple LP-lists and generations of improvements of them.

Figure 2 shows the total computational time, including both training and testing, for various training data sizes. Clearly, DPA, despite of its exponential time complexity, outperforms GA on all datasets. This is because the computational time of GA accumulates over generations. Greedy takes the least amount of time until the size of the training set picks up to very large. This is attributed to the larger constant in the asymptotic notion of Greedy than that of DPA. GA takes the most time as it goes through generations of the selecting processes.

We studied the learning problems of LP-lists, a preference formalism that is intuitive and concise over objects consisting of categorical attributes. We introduced an algorithm DPA that computes optimal LP-lists that decide the most number of given examples. DPA is based on dynamic programming, and it reduces the factorial time complexity of the pure brute force algorithm to exponential, at a cost of exponential space. Besides, we introduced a genetic algorithm GA for computing near-optimal LP-lists that satisfy as many given examples as it can. To evaluate our algorithms, we conducted substantial experiments showing that, for large example sets of sizes up to 10 million over the universe of over 9 million objects, DPA outperforms GA and baseline Greedy in both testing accuracy and computational time, with GA being a very close second in accuracy. For future work, we plan to perform experimental studies on preferential data generated from real-world datasets such as classification and regression datasets in the machine learning community. We also intend to extend our algorithms to allow learning more general lexicographic preference models