We give the first provably efficient algorithm for learning a one hidden layer convolutional network with respect to a general class of (potentially overlapping) patches. Additionally, our algorithm requires only mild conditions on the underlying distribution. We prove that our framework captures commonly used schemes from computer vision, including one-dimensional and two-dimensional "patch and stride" convolutions. Our algorithm-- Convotron -- is inspired by recent work applying isotonic regression to learning neural networks. Convotron uses a simple, iterative update rule that is stochastic in nature and tolerant to noise (requires only that the conditional mean function is a one layer convolutional network, as opposed to the realizable setting). In contrast to gradient descent, Convotron requires no special initialization or learning-rate tuning to converge to the global optimum. We also point out that learning one hidden convolutional layer with respect to a Gaussian distribution and just one disjoint patch P (the other patches may be arbitrary) is easy in the following sense: Convotron can efficiently recover the hidden weight vector by updating only in the direction of P. 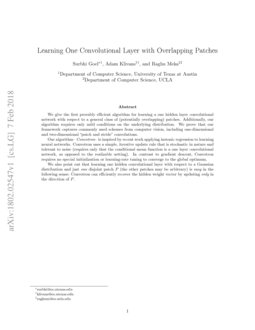 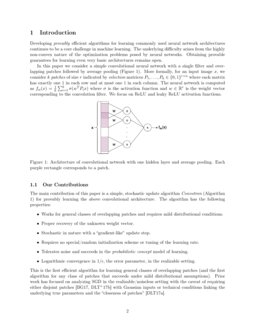 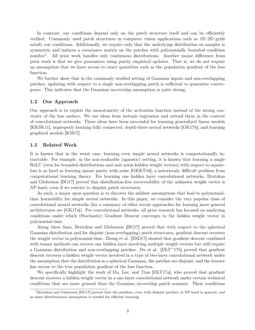 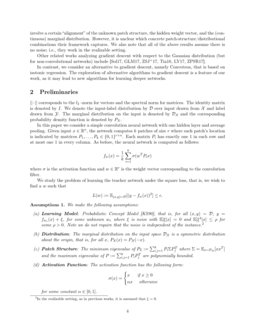 1). More formally, for an input image x, we consider k patches of size r indicated by selection matrices P1,…,Pk∈{0,1}r×n where each matrix has exactly one 1 in each row and at most one 1 in each column. The neural network is computed as fw(x)=1k∑ki=1σ(wTPix) where σ

is the activation function and

is the weight vector corresponding to the convolution filter. We focus on ReLU and leaky ReLU activation functions.

The main contribution of this paper is a simple, stochastic update algorithm Convotron (Algorithm 1) for provably learning the above convolutional architecture. The algorithm has the following properties:

This is the first efficient algorithm for learning general classes of overlapping patches (and the first algorithm for any class of patches that succeeds under mild distributional assumptions). Prior work has focused on analyzing SGD in the realizable/noiseless setting with the caveat of requiring either disjoint patches [BG17, DLT+17b] with Gaussian inputs or technical conditions linking the underlying true parameters and the “closeness of patches” [DLT17a].

In contrast, our conditions depend only on the patch structure itself and can be efficiently verified. Commonly used patch structures in computer vision applications such as 1D/2D grids satisfy our conditions. Additionally, we require only that the underlying distribution on samples is symmetric and induces a covariance matrix on the patches with polynomially bounded condition number444Brutzkus and Globerson [BG17] proved that the problem, even with disjoint patches, is NP-hard in general, and so some distributional assumption is needed for efficient learning.

. All prior work handles only continuous distributions. Another major difference from prior work is that we give guarantees using purely empirical updates. That is, we do not require an assumption that we have access to exact quantities such as the population gradient of the loss function.

Our approach is to exploit the monotonicity of the activation function instead of the strong convexity of the loss surface. We use ideas from isotonic regression and extend them in the context of convolutional networks. These ideas have been successful for learning generalized linear models [KKSK11], improperly learning fully connected, depth-three neural networks [GK17b], and learning graphical models [KM17].

It is known that in the worst case, learning even simple neural networks is computationally intractable. For example, in the non-realizable (agnostic) setting, it is known that learning a single ReLU (even for bounded distributions and unit norm hidden weight vectors) with respect to square-loss is as hard as learning sparse parity with noise [GKKT16]

[BG17] proved that distribution-free recoverability of the unknown weight vector is NP-hard, even if we restrict to disjoint patch structures.

As such, a major open question is to discover the mildest assumptions that lead to polynomial-time learnability for simple neural networks. In this paper, we consider the very popular class of convolutional neural networks (for a summary of other recent approaches for learning more general architectures see [GK17a]

). For convolutional networks, all prior research has focused on analyzing conditions under which (Stochastic) Gradient Descent converges to the hidden weight vector in polynomial-time.

Along these lines, Brutzkus and Globerson [BG17] proved that with respect to the spherical Gaussian distribution and for disjoint (non-overlapping) patch structures, gradient descent recovers the weight vector in polynomial-time. Zhong et al. [ZSD17]

[DLT+17b] proved that gradient descent recovers a hidden weight vector involved in a type of two-layer convolutional network under the assumption that the distribution is a spherical Gaussian, the patches are disjoint, and the learner has access to the true population gradient of the loss function.

We specifically highlight the work of Du, Lee, and Tian [DLT17a], who proved that gradient descent recovers a hidden weight vector in a one-layer convolutional network under certain technical conditions that are more general than the Gaussian/no-overlap patch scenario. Their conditions involve a certain “alignment” of the unknown patch structure, the hidden weight vector, and the (continuous) marginal distribution. However, it is unclear which concrete patch-structure/distributional combinations their framework captures. We also note that all of the above results assume there is no noise; i.e., they work in the realizable setting.

Other related works analyzing gradient descent with respect to the Gaussian distribution (but for non-convolutional networks) include [Sol17, GLM17, ZSJ+17, Tia16, LY17, ZPSR17].

-norm for vectors and the spectral norm for matrices. The identity matrix is denoted by

and the corresponding probability density function is denoted by

In this paper we consider a simple convolution neural network with one hidden layer and average pooling. Given input x∈Rn, the network computes k patches of size r where each patch’s location is indicated by matrices P1,…,Pk∈{0,1}r×n. Each matrix Pi has exactly one 1 in each row and at most one 1 in every column. As before, the neural network is computed as follows:

where σ is the activation function and w∈Rr is the weight vector corresponding to the convolution filter.

We study the problem of learning the teacher network under the square loss, that is, we wish to find a w such that

We make the following assumptions:

The distributional assumption includes common assumptions such as Gaussian inputs, but is far less restrictive. For example, we do not require the distribution to be continuous nor do we require it to have identity covariance. In Section 4, we show that commonly used patch schemes from computer vision satisfy our patch requirements. The assumption on activation functions is satisfied by popular activations such as ReLU (α=0) and leaky ReLU (α>0).

The activations we consider in this paper have the following useful property:

The loss function can be upper bounded by the l2-norm distance of weight vectors using the following lemma.

For any w, we have

The Gershgorin Circle Theorem, stated below, is useful for bounding the eigenvalues of matrices.

Note: The proofs of lemmas in this section have been deferred to the Appendix.

In this section we describe our main algorithm Convotron and give a proof of its correctness. Convotron is an iterative algorithm similar in flavor to SGD with a modified (aggressive) gradient update. Unlike SGD (Algorithm 3), Convotron comes with provable guarantees and also does not need a good initialization scheme for convergence.

The following theorem describes the convergence rate of our algorithm:

Define St={(x1,y1),…,(xt,yt)} The dynamics of Convotron can be expressed as follows:

We need to bound the RHS of the above equation. We have,

(1) follows using linearity of expectation and the fact that that E[ξt|xt]=0 and (2) follows from using Lemma 1. (3) follows from observing that PΣ is symmetric, thus ∀x,xTPΣx≥λmin(PΣ)||x||2.

Now we bound the variance of

Combining the above equations and taking expectation over St−1, we get

since at initialization ||w1−w∗||=||w∗||. Setting T=O(1ηβlog(1ϵδ)) and using Markov’s inequality, with probability 1−δ, over the choice of ST,

3.1 Convotron in the Realizable Case

For the realizable (no noise) setting, that is, for all (x,y)∼D, y=fw∗(x), for some unknown w∗, Convotron achieves faster convergence rates.

If Assumptions 1 are satisfied with the learning model restricted to the realizable case, then for suitably choosen η, after T=O(k2λmax(P)Ex[||x||4]λmin(PΣ)2log(1ϵδ)) iterations, with probability 1−δ, the weight vector w computed by Convotron satisfies

Since the setting has no noise, ρ=0. Setting that parameter in Theorem 2 gives us η=Ω(λmin(PΣ)kλmax(P)Ex[||x||4]) as ϵ||w∗||2√ρEx[||x||4] tends to infinity as ρ tends to 0 and taking the minimum removes this dependence from η. Substituting this η gives us the required result. ∎

Observe that the dependence of ϵ in the convergence rate is log(1/ϵ) for the realizable setting, compared to the 1/ϵ dependence in the noisy setting.

4 Which Patch Structures are Easy to Learn?

In this section, we will show that the commonly used convolutional filters in practice (“patch and stride”) have good eigenvalues giving us fast convergence by Theorem 2. We will start with the 1D case and then subsequently extend the result for the 2D case.

where 0a×b indicates a matrix of dimension a×b with all zeros and Ia indicates the identity matrix of size a.

Thus, the total number of patches is k=⌊n−rd⌋+1. We will assume that n≥2r−1 and r≥d. The latter condition is to ensure there is some overlap, non-overlapping case, which is easier, is handled in the next section.

We will bound the extremal eigenvalues of P=∑ki,j=1PiPTj. Simple algebra gives us the following structure for P,

For understanding, we show the matrix structure for d=1 and n≥2r.

The following lemmas bound the extremal eigenvalues of P.

We break the analysis into following two cases:

Combining both, we get the required result. ∎

Augmenting the above analysis with Theorem 2 gives us learnability of 1D convolution filters.

Combining the above Lemmas gives us that λmax(P)=O(pk)=O(nr/d2) and λmin(P)=Ω(1). Observe that λmin(PΣ)≥λmin(P)λmin(Σ). Substituting these values in Theorem 2 gives us the desired result. ∎

Comparing with SGD, [BG17] showed that even for r=2 and d=1, Gradient descent can get stuck in a local minima with probability ≥1/4.

Here we formally define stride and patch convolutions in two dimensions. Consider a 2D image of dimension n1×n2. Let the patch size be r1×r2 and stride in both directions be d1,d2 respectively. Enumerate patches such that patch (i,j) starts at position ((i−1)d1+1,(j−1)d2+1) and is a rectangle with diagonally opposite point ((i−1)d2+r1,(j−1)d2+r2). Let k1=⌊n1−r1d1⌋+1 and k2=⌊n2−r2d2⌋+1. Let us vectorize the image row-wise into a n1n2 dimension vector and enumerate each patch row-wise to get a r1r2 dimensional vector.

Intuitively P(1)i and P(2)j give the indices corresponding to the row and column of the 2D patch and the Kronecker product vectorizes it to give us the (i,j)th patch. More formally, we will show that (Q(i,j))a,b=1 iff (P(1)i⊗P(2)j)a,b=1.

Note that this technique can be extended to higher dimensional patch structures as well.

Similar to the 1D case, combining the above analysis with Theorem 2 gives us learnability of 2D convolution filters.

In this section, we will show that if there is one patch that does not overlap with any patch and the covariance matrix is identity then we can easily learn the filter even if the other patches have arbitrary overlaps. This includes the commonly used Gaussian assumption. WLOG we assume that P1 is the patch that does not overlap with any other patch implying P1PTj=PTjP1=0 for all j≠1.

Observe that the algorithm ignores the directions of all other patches and yet succeeds. This indicates that with respect to a Gaussian distribution, in order to have an interesting patch structure (for one layer networks), it is necessary to avoid having even a single disjoint patch. The following theorem shows the convergence of Convotron-No-Overlap.