Weakly-supervised object detection has recently attracted increasing attention since it only requires image-levelannotations. However, the performance obtained by existingmethods is still far from being satisfactory compared with fully-supervised object detection methods. To achieve a good trade-off between annotation cost and object detection performance,we propose a simple yet effective method which incorporatesCNN visualization with click supervision to generate the pseudoground-truths (i.e., bounding boxes). These pseudo ground-truthscan be used to train a fully-supervised detector. To estimatethe object scale, we firstly adopt a proposal selection algorithmto preserve high-quality proposals, and then generate ClassActivation Maps (CAMs) for these preserved proposals by theproposed CNN visualization algorithm called Spatial AttentionCAM. Finally, we fuse these CAMs together to generate pseudoground-truths and train a fully-supervised object detector withthese ground-truths. Experimental results on the PASCAL VOC2007 and VOC 2012 datasets show that the proposed methodcan obtain much higher accuracy for estimating the object scale,compared with the state-of-the-art image-level based methodsand the center-click based method 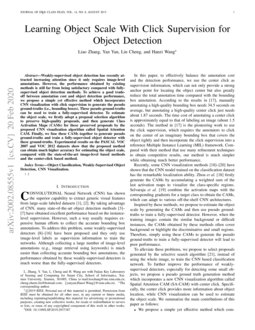 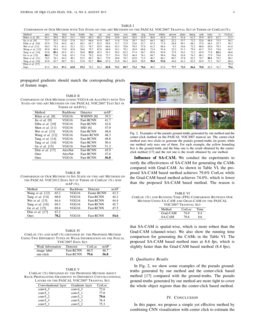 Convolutional Neural Network (CNN) has shown the superior capability to extract generic visual features from large-scale labeled datasets [1, 2]. By taking advantage of CNN, many state-of-the-art object detection methods [3, 4, 5, 6, 7] have obtained excellent performance based on the instance-level supervision. However, such a way usually requires expensive human efforts to collect the accurate bounding box annotations. To address this problem, some weakly-supervised detectors [8, 9, 10, 11, 12, 13, 14, 15, 16]

have been proposed and they only use image-level labels as supervision information to train the networks. Although collecting a large number of image-level annotations (e.g., image retrieval using keywords) is much easier than collecting accurate bounding box annotations, the performance obtained by these weakly-supervised detectors is much worse than the fully-supervised detectors.

In this paper, to effectively balance the annotation cost and the detection performance, we use the center click as supervision information, which can not only provide a strong anchor point for locating the object center but also greatly reduce the total annotation time compared with the bounding box annotation. According to the results in [17], manually annotating a high-quality bounding box needs 34.5 seconds on average, but annotating a high-quality center click just needs about 1.87 seconds. The time cost of annotating a center click is approximately equal to that of labeling an image (about 1.5 seconds). The method in [17] is the pioneering work to use the click supervision, which requires the annotators to click on the center of an imaginary bounding box that covers the object tightly and then incorporate the click supervision into a reference Multiple Instance Learning (MIL) framework. Compared with their method that use many refinement techniques to obtain competitive results, our method is much simpler while obtaining much better performance.

Recently, some CNN visualization methods [18, 19, 20] have shown that the CNN model trained on the classification dataset has the remarkable localization ability. Zhou et al.[18] firstly generate the CAMs by accumulating a weighted sum of the last activation maps to visualize the class-specific regions. Selvaraju et al.[19] combine the activation maps with the corresponding gradients for a target class to obtain the CAMs, which can adapt to various off-the-shelf CNN architectures.

Inspired by these methods, we propose to estimate the object scale by generating the CAMs and then use pseudo ground-truths to train a fully-supervised detector. However, when the training images contain the similar background or difficult instances, the CAMs obtained by these methods often cover background or highlight the discriminative and small regions. Therefore, simply using these CAMs to generate the pseudo ground-truths to train a fully-supervised detector will lead to poor performance.

To alleviate these problems, we propose to select proposals generated by the selective search algorithm [21], instead of using the whole image, to train the CNN based classification network. To further improve the performance of weakly-supervised detectors, especially for detecting some small objects, we propose a pseudo ground truth generation method which incorporates a new CNN visualization algorithm called Spatial Attention CAM (SA-CAM) with center click. Specifically, the center click provides more information about object location, while CNN visualization can be used to estimate the object scale. We summarize the main contributions of this paper as follows:

In this section, we introduce the proposed method in detail. Firstly, we select high-quality proposals generated by the selective search algorithm to train a classification network (Section II-A). Secondly, we generate the pseudo ground-truths by taking advantage of the proposed CNN visualization method (Section II-B). Finally, these pseudo ground-truths are used to train the fully-supervised object detectors (Section II-C). Fig. 1 shows the network architecture of our method.

In this paper, we make use of center click as supervision information instead of only using image-level annotation. Hence, how to take advantage of center click to obtain tight and accurate pseudo ground-truths (considering different object scales), which can be used to train a fully-supervised object detector, is the main problem. Since the object detection datasets (e.g., PASCAL VOC) usually contain many challenging samples, simply applying these CNN visualization methods [18, 19] to estimate the object scale may fail.

Therefore, instead of training the classification network on the whole training image, we adopt a classification proposal selection algorithm to select proposals. For each image I, we firstly use the selective search algorithm [21] to generate about 2,000 proposals and then we filter out some proposals if there are no any center clicks inside them. For these preserved proposals, we rank them according to the Euclidean distance between the centers of these proposals and the positions of the center click. Note that these ranked proposals usually have big overlaps with each other. Therefore, we iteratively remove some highly overlapped proposals whose intersection-over-union (IoU) is larger than a threshold Tiou. Finally, we choose the top N proposals to train our classification network (in this paper, we use VGG16 [22]

[1] as our backbone). Since these selected proposals contain less background and they contain more details, we can estimate the object scale more accurately.

Given an image I, let An,l,k be the k-th activation map in the l-th layer of the n-th proposal. For a target class c, how to discriminate each pixel of An,l,k corresponding to c from other classes or background is the main issue for estimating the object scale. Grad-CAM firstly computes the gradients of the score yc (which is the output of the last fully-connected layer corresponding to class c), with respect to the activation map An,l,k, (i.e. ∂yc∂An,l,k). And then, these gradients are global-average-pooled to obtain the weight wcn,l,k

where GAP(⋅) is the global average pooling operation.

can be generated based on a weighted sum of activation maps and a ReLU operation.

Grad-CAM uses GAP to obtain the average value of gradients (which can be positive or negative) as the weight for each activation map. However, it may not be precise enough to generate the CAMs by using a weighted sum of activation maps (because that only the positive gradients of each activation map indicate the presence of the target class c). Therefore, we firstly use a ReLU function to preserve those positive gradients and remove the negative gradients. Then, we propose to assign an attention score, which indicates the importance of each pixel belonging to the target class c, for each pixel of An,l,k by multiplying the gradients with the corresponding pixel values. Specifically, the proposed SA-CAM is computed as:

Based on Eq. (3), we firstly generate the CAMs for the selected proposals. And then, the generated CAMs are upsampled into their original sizes because these selected proposals have different sizes. Furthermore, we project these CAMs back to their original positions in the image I. Finally, these CAMs are fused together to get a higher resolution.

After obtaining the fused CAMs, we can easily get the discriminative regions by using a threshold Tcam. However, these regions are not accurate enough to generate the pseudo ground-truths for training a fully-supervised object detector. Note that the center click provides a strong anchor point for the object center location. Therefore, we can get more accurate centro-symmetric regions by utilizing these center clicks. These centro-symmetric regions can be used to generate the pseudo ground-truths.

Datasets. We conduct the experiments on the PASCAL VOC 2007 and VOC 2012 datasets [23], which are commonly used for the weakly-supervised objection detection task. We use the center click annotation data provided by [17].

Evaluation Metrics. Mean Average Precision (mAP) is the standard metric used in PASCAL VOC, which evaluates the performance of an object detector. Correct Localization (CorLoc) [24] calculates the percentage of the bounding boxes (generated by the evaluated algorithm) that correctly localize an object of the target class. Both of the two metrics consider a bounding box as a true positive sample if its IoU with the ground-truth target region is larger than 0.5.

We conduct our experiments based on Caffe

[25] and use VGG16 pretrained on ImageNet as the classification backbone network. We set Tiou to 0.7 for removing the overlapped proposals and select 8 proposals (i.e. N = 8) for each center click. For generating pseudo ground-truths, we experimentally set Tcam to be 80 if the number of image labels is less than 2 or set it to be 120 if the number is larger than 2. We follow the training strategy of Fast-RCNN [4] to train a fully-supervised detector. Our experiments are conducted on a NVIDIA Titan XP GPU.

We compare our method with several state-of-the-art image-level based detection methods [8, 9, 10, 11, 12, 13, 14, 15, 16] and a center-click (one click) based method [17]. Table I shows the CorLoc performance evaluated on the PASCAL VOC2007 trainval set. Bold font indicates best results obtained by the competing methods. Our method outperforms all the image-level based detection methods by a significant margin (11.2%-26.1%). Moreover, it also outperforms the center-click based method by 6.3% and obtains better CorLoc performance for most of the classes, especially for small objects (e.g., “boat”, “bottle”, “plant”). The main reason is that our method can select high-quality proposals and thus it can estimate the object scale accurately. As a result, our method can obtain higher mAP performance than the competing methods. Table II shows the mAP performance on the PASCAL VOC2007 test set. Note that except for [8], the results obtained by the competing methods are achieved via training fully supervised object detectors. Our method trained on VGG16 achieves 56.8% mAP, outperforming all the state-of-the-art image-level based methods, which also use VGG16 as backbone, by at least 5.4%. Note that the center-click based method in [17] uses AlexNet[26] as the backbone. For fair comparison, we replace VGG16 with AlexNet as done in [17]. As a result, our method achieves 47.6% mAP, which is better than 45.9% mAP obtained by the method in [17].

We also conduct the experiments on the PASCAL VOC 2012 set. As shown in Table III, our method achieves 78.2% CorLoc and 54.6% mAP, which still outperforms all the image-level based methods and the center-click based method. The mAP results can be found at:http://host.robots.ox.ac.uk:8080/anonymous/2PLONT.html

Influence of Using Different Types of Weak Information. Table IV shows the comparison results obtained by the proposed method using different types of weak information (i.e., image labels and one center click). From the results, we can see that only using image labels to estimate the object scale lead to poor performance (60.5% CorLoc and 46.7% mAP). In contrast, our one-click based method achieves 79.6% CorLoc and 56.8% mAP, which achieves 19.1% improvement on CorLoc and about 10.1% improvement on mAP compared with our method only using image-label annotation. Therefore, center click is an efficient annotating strategy for improving the performance of weakly supervised object detectors.

The main reason is that the back-propagated gradients should match the corresponding pixels of feature maps.

In this paper, we propose a simple yet effective method by combining CNN visualization with center click to estimate the object scale for object detection. We use one click as supervision information, and with the help of the proposal selection algorithm and the proposed Spatial Attention (SA-CAM), we can estimate the object scale accurately and generate high-quality pseudo ground-truths. Experimental results show the superiority of the proposed method compared with the state-of-the-art methods.