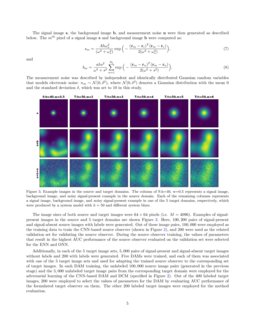 Medical imaging systems are commonly assessed by use of objective measures of image quality that quantify the performance of an observer at specific tasks[2, 16, 20, 17, 19, 18]. Supervised deep learning methods have been actively investigated to learn and implement numerical observers for task-based image quality assessment. For example, Zhou et. al.

[19]. These supervised deep learning-based methods require a large amount of labeled data for training. However, in practice, labeling a large of experimental data is tedious, expensive, and prone to subjective errors.

In contrast, labeled computer-simulated image data can be relatively convenient to generate. If the simulated data are realistic enough, it is potentially feasible to train a deep learning-based numerical observer (DL-NO) with a large amount of simulated data and then directly apply it to experimental data. However, it is often difficult to computationally model complicated anatomical structures and the response of real-world imaging systems and therefore simulated image data will generally possess physical and statistical differences from the experimental image data they seek to emulate. This results in a so-called domain shift between the two sets of images[6, 5, 4]

. This domain shift can significantly degrade the performance of a DL-NO that is trained on simulated images but applied to experimental ones. Recently, domain adaptation methods that aim at mitigating the effect of domain shifts have been applied to several computer vision tasks including image classification

In this study, we propose and investigate the use of an adversarial domain adaptation method to mitigate the deliterious effects of domain shift between simulated and experimental image data for DL-NOs that are trained on simulated images but applied to experimental ones. The employed domain adaption methodology wil not require labelled experimental images. As a proof of concept, a convolutional neural network (CNN) is employed as the NO and a binary signal detection task is considered. Through computer-simulation studies, the success of this strategy as a function of the degree of domain shift present between the simulated and experimental image data is investigated.

2.1 Framework of the Proposed Method

In the stage of source observer training, a large amount of labeled computer-simulated data (source data) are automatically generated, and then employed to train a DL-NO operating in the source domain (source observer). As shown in Figure 1

In the DAM training stage, a deep neural network-based domain adaptation model (DAM) is trained by use of labeled simulated data (source data) and unlabeled experimental data (target data). The trained DAM will be employed to adapt the trained source observer to the target data domain (target domain). This task is achieved by mapping the target data to a feature space that is close to the feature space the trained ENN maps to. The DAM is trained by minimizing the distance between the feature space of the source domain and that of the target domain. A neural network-based domain critic model (DCM) is built up for measuring the distance between the two feature spaces. The DAM and DCM are iteratively trained via an adversarial learning approach introduced in the literature [1].

In the stage of target observer formulation, the trained DAM and the trained ONN (the second part of the source observer) are integrated to formulate a target numerical observer that can operate on experimental data for image quality assessment tasks.

2.2 Example of the Proposed Method

In this study, the method for learning a CNN-based numerical observer for a binary signal detection task proposed by Zhou et. al. [19] is employed as an example to demonstrate the stages of the proposed method and its performance.

where b∈RM×1 and s∈RM×1 denote the background and signal in the image domain, respectively, and n∈RM×1 is the measurement noise. Here M is the total number of pixels in an image.

A numerical observer computes a scalar test statistic t for this binary signal detection task. A decision is made in favor of hypothesis H1 if t is greater than some threshold; otherwise H0 is selected.

The goal of this stage is to train a CNN-based source observer by use of a large amount of simulated images that represent the source domain. This is depicted in the left block of Figure 1.

In the stage of source observer training, the CNN-based source observer is trained. Figure 2 shows the network architectures of the ENN and ONN. The ENN contains a chain of 7

convolutional layer-Leaky ReLu layer (CONV-LeReLu) blocks and a max pooling layer (Max-Pool). The ONN has a fully connected layer-Leaky LeReLU (FC-LeReLU) block, followed by a sigmoid function in the last layer. The ENN encodes a simulated image into a low-dimensional but highly-representative feature space, while the ONN works as a classifier that computes a probability of the input simulated image belonging to hypothesis

H1 by use of the encoded features.

Let the CNN-based source observer be parameterized by a set of parameters Θ. The output of the source observer can be represented by p(H1|g,Θ). Let y∈{0,1} denote the image label, where y=0 and y=1 correspond to the hypothesis H0 and H1, respectively. Given a set of Nd independent labeled source images, D={(gi,yi)}Ndi=1, Θ

is determined by minimizing an average cross-entropy loss function,

where gi∈RM×1 and yi∈{0,1} are the ith training image and the associated label. The loss function l(Θ|D) is numerically minimized by use of methods described in the literature [19]. The trained ENN (the first part of the source observer) will be employed for training the DAM as described next.

The network architectures of the DAM and DCM are specified as two CNNs shown in Figure 2. In this study, the DAM has the same architecture as the ENN, considering both of them have similar function: mapping an image data into a low-dimensional feature space. The Wasserstein distance was employed to quantify the domain shift in the adversarial learning process for training the DAM and DCM. The trained CNN-based DAM will be employed as part of the target observer in the next stage.

2.3 Numerical Studies to Demonstrate the Performance of the Proposed Method

In our proof-of-principle study, simulated images were employed to represent both the source and target domain images. This permitted a controlled and systematic investigation of the proposed method. The experimental (target domain) images were assumed to be produced by an idealized parallel-hole collimator system described by a point response function of the form [12]

where the system height h=50. Five sets of target domain images were produced with 5 different system blurs w=2.0, w=3.0, w=4.0, w=5.0 and w=6.0, respectively. The simulated (source domain) images were produced by the same imaging model but with an incorrect value of the system height h=40 and that of the system blur w=0.5. It can be expected that different sets of target domain images have different levels of domain shifts with the source domain images. These data were employed to investigate how the degree of domain shift impacts the performance of the proposed method.

A binary signal-known-exactly and background-known-statistically (SKE/BKS) detection task was considered. For both the source and target domain images, the signal function, fs(r), was described by a 2D symmetric Gaussian function:

where A=0.2 is the amplitude, rc=[32,32]T is the coordinate of the signal location, and ws=3 is the width of the signal. The background described by a stochastic lumpy object model:

is the number of lumps that is sampled from a Poisson distribution:

lumpy that was sampled from a uniform distribution over the field of view.

denotes a Gaussian distribution with the mean

and the standard deviation

The naive method that directly applies the trained source observer to each of the 5 target image sets is referred to as the Source Observer (SO). The proposed method that employs adversarial domain adaption will be referred to as the Source Observer+Domain Adaptation (SODA). Finally, as a reference, we compute the performance of the CNN-based NO for the case when there is a large amount of labeled target images. Of course, the assumption of this work is that such data are not readily available. This method, referred to as the Target Observer (TO), employs the the same CNN architectures as the ENN and ONN specified in Figure 2. In the TO method, 100,000 pairs of signal-present and signal-absent images from each of the 5 target image domains were generated and employed to directly train 5 target observers, respectively. The same 5 validation sets and 5 testing sets generated in the SODA were employed for validating and testing the 5 trained numerical observers in the TO. The detection performances of the TO will be used as ground truths to evaluate the performance of the proposed method at 5 different levels of domain shifts.

The ROC curves from SO, SODA, and TO were evaluated on the 200 pairs of target testing images from each of the five target image domains. The Metz-ROC software was employed to fit the ROC curves [14].

As an example, the fitted ROC curves for the three methods computed in the target domain associated with w=4.0 is shown in Figure 4. The resulting ROC curve and AUC value of the proposed method were compared to those produced by use of the SO and TO respectively. The AUC values corresponding to the numerical observers trained by use of the SO, SODA, and TO are 0.8112, 0.8563, and 0.9205, respectively. It is observed that, as expected, directly applying a trained source observer to target images provides the worst detection performance due to the domain shift between the source and target domains. By use of a domain adaptation strategy, the proposed method (SODA) can learn a CNN-based numerical observer that shows improved detection performance compared to the SO. The TO shows the best detection performance, however it is trained with a large amount of labeled target images but only a limited amount of unlabeled target images were employed in the proposed method (SODA).

Additionally, the detection performance, in terms of AUC, of the proposed SODA as a function of domain shifts are shown in the Table 1.

It can be observed from the table that in all the 5 domain shift cases, the proposed SODA improved the AUC performance compared to the SO, which demonstrate the potential of the proposed method. From the table we can also see that the gap between the AUC performance of proposed method and that of the TO increases with the increase in the level of domain shift and the increase in challenge level of the corresponding adaptation task.