We consider multi-agent decision making where each agent's cost function depends on all agents' strategies. We propose a distributed algorithm to learn a Nash equilibrium, whereby each agent uses only obtained values of her cost function at each joint played action, lacking any information of the functional form of her cost or other agents' costs or strategy sets. In contrast to past work where convergent algorithms required strong monotonicity, we prove algorithm convergence under mere monotonicity assumption. This significantly widens algorithm's applicability, such as to games with linear coupling constraints. 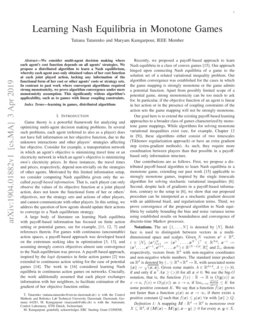 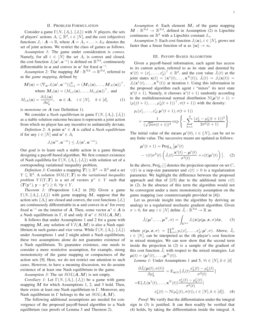 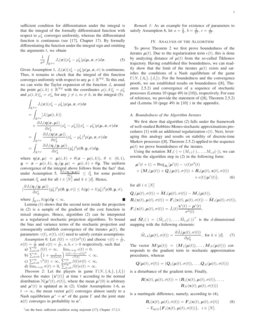 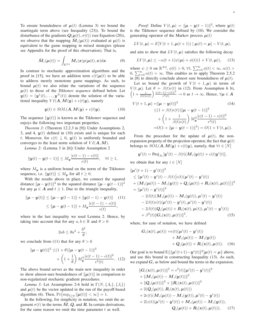 Game theory is a powerful framework for analyzing and optimizing multi-agent decision making problems. In several such problems, each agent (referred to also as a player) does not have full information on her objective function, due to the unknown interactions and other players’ strategies affecting her objective. Consider for example, a transportation network in which an agent’s objective is minimizing travel time or an electricity network in which an agent’s objective is minimizing own’s electricity prices. In these instances, the travel times and prices, respectively, depend non-trivially on the strategies of other agents. Motivated by this limited information setup, we consider computing Nash equilibria given only the so-called payoff-based information. That is, each player can only observe the values of its objective function at a joint played action, does not know the functional form of her or others’ objectives, nor the strategy sets and actions of other players, and cannot communicate with other players. In this setting, we address the question of how agents should update their actions to converge to a Nash equilibrium strategy.

A large body of literature on learning Nash equilibria with payoff-based information has focused on finite action setting or potential games, see for example, [11, 12, 7] and references therein. For games with continuous (uncountable) action spaces, a payoff-based approach was developed based on the extremum seeking idea in optimization [3, 13], and assuming strongly convex objectives almost sure convergence to the Nash equilibrium was proven. A payoff-based approach, inspired by the logit dynamics in finite action games [2] was extended to continuous action setting for the case of potential games [14]. The work in [16]

considered learning Nash equilibria in continuous action games on networks. Crucially, the work additionally assumed that each player exchanges information with her neighbors, to facilitate estimation of the gradient of her objective function online.

Recently, we proposed a payoff-based approach to learn Nash equilibria in a class of convex games [15]. Our approach hinged upon connecting Nash equilibria of a game to the solution set of a related variational inequality problem. Our algorithm convergence was established for the cases in which the game mapping is strongly monotone or the game admits a potential function. Apart from possibly limited scope of a potential game, strong monotonicity can be too much to ask for. In particular, if the objective function of an agent is linear in her action or in the presence of coupling constraints of the action sets the game mapping will not be strongly monotone.

Our goal here is to extend the existing payoff-based learning approaches to a broader class of games characterized by monotone game mappings. While algorithms for solving monotone variational inequalities exist (see, for example, Chapter 12 in [9]), these algorithms either consist of two timescales (Tikhonov regularization approach) or have an extra gradient step (extra-gradient methods). As such, they require more coordination between players than that possible in a payoff-based only information structure.

Our contributions are as follows. First, we propose a distributed payoff-based algorithm to learn Nash equilibria in a monotone game, extending our past work [15] applicable to strongly monotone games, inspired by the single timescale algorithm for solving stochastic variational inequalities [6]. Second, despite lack of gradients in a payoff-based information, contrary to the setup in [6]

, we show that our proposed procedure can be interpreted as a stochastic gradient descent with an additional biasL and regularization terms. Third, we prove convergence of the proposed algorithm to Nash equilibria by suitably bounding the bias and noise variance terms using established results on boundedness and convergence of discrete-time Markov processes.

. Boldface is used to distinguish between vectors in a multi-dimensional space and scalars. Given

Consider a game Γ(N,{Ai},{Ji}) with N players, the sets of players’ actions Ai⊆Rd, i∈[N], and the cost (objective) functions Ji:A→R, where A=A1×…×AN denotes the set of joint actions. We restrict the class of games as follows.

The game under consideration is convex. Namely, for all i∈[N] the set Ai is convex and closed, the cost function Ji(ai,a−i) is defined on RNd, continuously differentiable in a and convex in ai for fixed a−i.

The mapping M:RNd→RNd, referred to as the game mapping, defined by

is monotone on A (see Definition 1).

We consider a Nash equilibrium in game Γ(N,{Ai},{Ji}) as a stable solution outcome because it represents a joint action from which no player has any incentive to unilaterally deviate.

Our goal is to learn such a stable action in a game through designing a payoff-based algorithm. We first connect existence of Nash equilibria for Γ(N,{Ai},{Ji}) with solution set of a corresponding variational inequality problem.

(Proposition 1.4.2 in [9]) Given a game Γ(N,{Ai},{Ji}) with game mapping M, suppose that the action sets {Ai} are closed and convex, the cost functions {Ji} are continuously differentiable in a and convex in ai for every fixed a−i on the interior of A. Then, some vector a∗∈A is a Nash equilibrium in Γ, if and only if a∗∈SOL(A,M).

The set SOL(A,M) is not empty.

The following additional assumptions are needed for convergence of the proposed payoff-based algorithm to a Nash equilibrium (see proofs of Lemma 3 and Theorem 2).

Each element Mi of the game mapping M:RNd→RNd, defined in Assumption (2) is Lipschitz continuous on Rd with a Lipschitz constant Li.

Each cost function Ji(a), i∈[N], grows not faster than a linear function of a as ∥a∥→∞.

randomly according to the multidimensional normal distribution

The initial value of the means μi(0), i∈{N}, can be set to any finite value. The successive means are updated as follows:

In the above, ProjC[⋅] denotes the projection operator on set C, γ(t) is a step-size parameter and ϵ(t)>0 is a regularization parameter. We highlight the difference between the proposed approach and that of [15] due to the additional term ϵ(t) in (2). In the absence of this term the algorithm would not be convergent under a mere monotonicity assumption on the game mapping (see counterexample provided in [4]).

Let us provide insight into the algorithm by deriving an analogy to a regularized stochastic gradient algorithm. Given σ>0, for any i∈[N] define ~Ji:RNd→R as

Given Assumption 1, Ji(x)(xik−μik)p(μ,x,σ) is continuous. Thus, it remains to check that the integral of this function converges uniformly with respect to any μ∈RNd. To this end, we can write the Taylor expansion of the function Ji around the point μ(i,k)∈RNd with the coordinates μ(i,k)ik=μik and μ(i,k)jm=xjm for any j≠i, m≠k, in the integral (6):

Lemma (1) shows that the second term inside the projection in (2) is a sample of the gradient of the cost function in mixed strategies. Hence, algorithm (2) can be interpreted as a regularized stochastic projection algorithms. To bound the bias and variance terms of the stochastic projection and consequently establish convergence of the iterates μ(t), the parameters γ(t), σ(t), ϵ(t) need to satisfy certain assumptions.

Let the players in game Γ(N,{Ai},{Ji}) choose the states {xi(t)} at time t according to the normal distribution N(μi(t),σ(t)), where the mean μi(0) is arbitrary and μi(t) is updated as in (2). Under Assumptions 1-6, as t→∞, the mean vector μ(t) converges almost surely to a Nash equilibrium μ∗=a∗ of the game Γ and the joint state x(t)

converges in probability to

Iv Analysis of the Algorithm

To prove Theorem 2 we first prove boundedness of the iterates μ(t). Due to the regularization term ϵ(t), this is done by analyzing distance of μ(t) from the so-called Tikhonov trajectory. Having established this boundedness, we can readily show that the limit of the iterates μ(t) exists and satisfies the conditions of a Nash equilibrium of the game Γ(N,{Ai},{Ji}). For the boundedness and the convergence proofs, we use established results on boundedness ([8], Theorem 2.5.2) and convergence of a sequence of stochastic processes (Lemma 10 (page 49) in [10]), respectively. For ease of reference, we provide the statement of ([8], Theorem 2.5.2) and (Lemma 10 (page 49) in [10] ) in the appendix.

Iv-a Boundedness of the Algorithm Iterates

We first show that algorithm (2) falls under the framework of well-studied Robbins-Monro stochastic approximations procedures [1] with an additional regularization ϵ(t). Next, leveraging this analogy and results on stability of discrete-time Markov processes ([8], Theorem 2.5.2) applied to the sequence μ(t) we prove boundedness of the iterates.

The vector M(μ(t))=(M1(μ(t)),…,MN(μ(t))) corresponds to the gradient term in stochastic approximation procedures, whereas

is a disturbance of the gradient term. Finally,

is a martingale difference, namely, according to (1),

To ensure boundedness of μ(t) (Lemma 3) we bound the martingale term above (see Inequality (IV-A)). To bound the disturbance of the gradients Q(μ(t),σ(t)) (see Equation (42)), we observe that the mapping ~Mi(μ(t)) evaluated at μ(t) is equivalent to the game mapping in mixed strategies (please see Appendix for the proof of this observation). That is,

In contrast to stochastic approximation algorithms and the proof in [15], we have an addition term ϵ(t)μ(t) to be able to address merely monotone game mappings. As such, to bound μ(t) we also relate the variations of the sequence μ(t) to those of the Tikhonov sequence defined below. Let y(t)=(y1(t),…,yN(t)) denote the solution of the variational inequality VI(A,M(y)+ϵ(t)y), namely

The sequence {y(t)} is known as the Tikhonov sequence and enjoys the following two important properties.

where My is a uniform bound on the norm of the Tikhonov sequence, i.e. ∥y(t)∥≤My for all t≥0.

where in the last inequality we used Lemma 2. Hence, by taking into account that for any a,b∈R and θ>0

The above bound serves as the main new inequality in order to show almost-sure boundedness of ∥μ(t)∥ in comparison to non-regularized stochastic gradient procedures.

In the following, for simplicity in notation, we omit the argument σ(t) in the terms ~M, Q, and R. In certain derivations, for the same reason we omit the time parameter t as well.

Define V(t,μ)=∥μ−y(t−1)∥2, where y(t) is the Tikhonov sequence defined by (13). We consider the generating operator of the Markov process μ(t)

and aim to show that LV(t,μ) satisfies the following decay

From the procedure for the update of μ(t), the non-expansion property of the projection operator, the fact that y(t) belongs to SOL(A,M(y)+ϵ(t)y), namely, that ∀i∈[N]

we obtain that for any i∈[N]

where, for ease of notation, we have defined

Our goal is to bound E{∥μi(t+1)−yi(t)∥2|μ(t)=μ} above, and use this bound in constructing Inequality (17). As such, we expand Gi as below and bound the terms in the expansion.

Due to Assumption 4, we conclude that