In this paper we present a unified framework for modeling multi-relational representations, scoring, and learning, and conduct an empirical study of several recent multi-relational embedding models under the framework. We investigate the different choices of relation operators based on linear and bilinear transformations, and also the effects of entity representations by incorporating unsupervised vectors pre-trained on extra textual resources. Our results show several interesting findings, enabling the design of a simple embedding model that achieves the new state-of-the-art performance on a popular knowledge base completion task evaluated on Freebase. 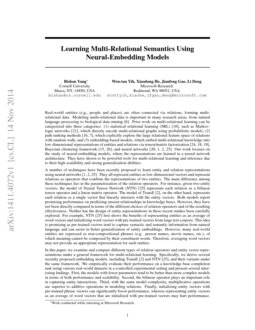 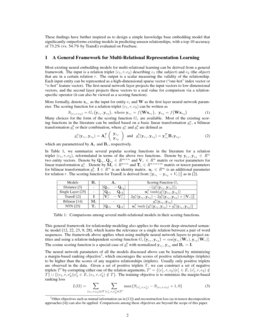 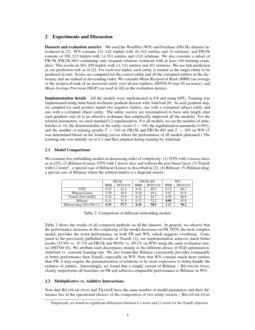 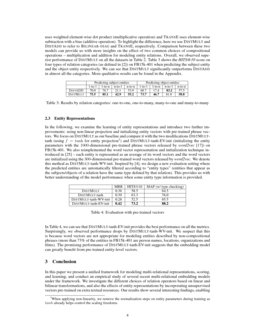 Embedding Entities and Relations for Learning and Inference in Knowledge Bases

We consider learning representations of entities and relations in KBs us...
Bishan Yang, et al. ∙

Incorporating Both Distributional and Relational Semantics in Word Representations

We investigate the hypothesis that word representations ought to incorpo...
Daniel Fried, et al. ∙

We review the task of Sentence Pair Scoring, popular in the literature i...
Petr Baudis, et al. ∙

Most existing neural embedding models for multi-relational learning can be derived from a general framework. The input is a relation triplet (e1,r,e2) describing e1 (the subject) and e2 (the object) that are in a certain relation r. The output is a scalar measuring the validity of the relationship. Each input entity can be represented as a high-dimensional sparse vector (“one-hot” index vector or “n-hot” feature vector). The first neural network layer projects the input vectors to low dimensional vectors, and the second layer projects these vectors to a real value for comparison via a relation-specific operator (it can also be viewed as a scoring function).

More formally, denote xei as the input for entity ei and W as the first layer neural network parameter. The scoring function for a relation triplet (e1,r,e2) can be written as

Many choices for the form of the scoring function Gr

are available. Most of the existing scoring functions in the literature can be unified based on a basic linear transformation

gar, a bilinear transformation gbr or their combination, where gar and gbr are defined as

which are parametrized by Ar and Br, respectively.

is an identity matrix.

ur∈Rm is an additional parameter for relation r. The scoring function for TransE is derived from ||ye1−ye2+Vr||22 as in [2].

This general framework for relationship modeling also applies to the recent deep-structured semantic model [12, 22, 23, 9, 28], which learns the relevance or a single relation between a pair of word sequences. The framework above applies when using multiple neural network layers to project entities and using a relation-independent scoring function Gr(ye1,ye2)=cos[ye1(Wr),ye2(Wr)]. The cosine scoring function is a special case of gbr with normalized ye1,ye2 and Br=I.

The neural network parameters of all the models discussed above can be learned by minimizing a margin-based ranking objective111Other objectives such as mutual information (as in [12]) and reconstruction loss (as in tensor decomposition approaches [4]) can also be applied. Comparisons among these objectives are beyond the scope of this paper., which encourages the scores of positive relationships (triplets) to be higher than the scores of any negative relationships (triplets). Usually only positive triplets are observed in the data. Given a set of positive triplets T, we can construct a set of negative triplets T′ by corrupting either one of the relation arguments, T′={(e′1,r,e2)|e′1∈E,(e′1,r,e2)∉T}∪{(e1,r,e′2)|e′2∈E,(e1,r,e′2)∉T}. The training objective is to minimize the margin-based ranking loss

We used the WordNet (WN) and Freebase (FB15k) datasets introduced in [2]. WN contains 151,442 triplets with 40,943 entities and 18 relations, and FB15k consists of 592,213 triplets with 14,951 entities and 1345 relations. We also consider a subset of FB15k (FB15k-401) containing only frequent relations (relations with at least 100 training examples). This results in 560,209 triplets with 14,541 entities and 401 relations. We use link prediction as our prediction task as in [2]. For each test triplet, each entity is treated as the target entity to be predicted in turn. Scores are computed for the correct entity and all the corrupted entities in the dictionary and are ranked in descending order. We consider Mean Reciprocal Rank (MRR) (an average of the reciprocal rank of an answered entity over all test triplets), HITS@10 (top-10 accuracy), and Mean Average Precision (MAP) (as used in [4]

) as the evaluation metrics.

All the models were implemented in C# and using GPU. Training was implemented using mini-batch stochastic gradient descent with AdaGrad

[8]. At each gradient step, we sampled for each positive triplet two negative triplets, one with a corrupted subject entity and one with a corrupted object entity. The entity vectors are renormalized to have unit length after each gradient step (it is an effective technique that empirically improved all the models). For the relation parameters, we used standard L2 regularization. For all models, we set the number of mini-batches to 10, the dimensionality of the entity vector d=100, the regularization parameter 0.0001

, and the number of training epochs

T=100 on FB15k and FB15k-401 and T=300 on WN (T was determined based on the learning curves where the performance of all models plateaued.) The learning rate was initially set to 0.1 and then adapted during training by AdaGrad.

We examine five embedding models in decreasing order of complexity: (1) NTN with 4 tensor slices as in [25]; (2) Bilinear+Linear, NTN with 1 tensor slice and without the non-linear layer; (3) TransE with L2 norm222Empirically we found no significant differences between L1-norm and L2-norm for the TransE objective. , a special case of Bilinear+Linear as described in [2]; (4) Bilinear; (5) Bilinear-diag: a special case of Bilinear where the relation matrix is a diagonal matrix.

Table 2 shows the results of all compared methods on all the datasets. In general, we observe that the performance increases as the complexity of the model decreases on FB. NTN, the most complex model, provides the worst performance on both FB and WN, which suggests overfitting. Compared to the previously published results of TransE [2], our implementation achieves much better results (53.9% vs. 47.1% on FB15k and 90.9% vs. 89.2% on WN) using the same evaluation metric (HITS@10). We attribute such discrepancy mainly to the different choice of SGD optimization: AdaGrad vs. constant learning rate. We also found that Bilinear consistently provides comparable or better performance than TransE, especially on WN. Note that WN contains much more entities than FB, it may require the parametrization of relations to be more expressive to better handle the richness of entities. Interestingly, we found that a simple variant of Bilinear – Bilinear-diag, clearly outperforms all baselines on FB and achieves comparable performance to Bilinear on WN.

Note that Bilinear-diag and TransE have the same number of model parameters and their difference lies in the operational choices of the composition of two entity vectors – Bilinear-diag uses weighted element-wise dot product (multiplicative operation) and TransE uses element-wise subtraction with a bias (additive operation). To highlight the difference, here we use DistMult and DistAdd to refer to Bilinear-diag and TransE, respectively. Comparison between these two models can provide us with more insights on the effect of two common choices of compositional operations – multiplication and addition for modeling entity relations. Overall, we observed superior performance of DistMult on all the datasets in Table 2. Table 3 shows the HITS@10 score on four types of relation categories (as defined in [2]) on FB15k-401 when predicting the subject entity and the object entity respectively. We can see that DistMult significantly outperforms DistAdd in almost all the categories. More qualitative results can be found in the Appendix.

In the following, we examine the learning of entity representations and introduce two further improvements: using non-linear projection and initializing entity vectors with pre-trained phrase vectors. We focus on DistMult as our baseline and compare it with the two modifications DistMult-tanh (using f=tanh for entity projection333When applying non-linearity, we remove the normalization steps on entity parameters during training as tanh already helps control the scaling freedoms.) and DistMult-tanh-EV-init (initializing the entity parameters with the 1000-dimensional pre-trained phrase vectors released by word2vec [17]) on FB15k-401. We also reimplemented the word vector representation and initialization technique introduced in [25] – each entity is represented as an average of its word vectors and the word vectors are initialized using the 300-dimensional pre-trained word vectors released by word2vec. We denote this method as DistMult-tanh-WV-init. Inspired by [4], we design a new evaluation setting where the predicted entities are automatically filtered according to “entity types” (entities that appear as the subjects/objects of a relation have the same type defined by that relation). This provides us with better understanding of the model performance when some entity type information is provided.

In Table 4, we can see that DistMult-tanh-EV-init provides the best performance on all the metrics. Surprisingly, we observed performance drops by DistMult-tanh-WV-init. We suspect that this is because word vectors are not appropriate for modeling entities described by non-compositional phrases (more than 73% of the entities in FB15k-401 are person names, locations, organizations and films). The promising performance of DistMult-tanh-EV-init suggests that the embedding model can greatly benefit from pre-trained entity-level vectors.

In this paper we present a unified framework for modeling multi-relational representations, scoring, and learning, and conduct an empirical study of several recent multi-relational embedding models under the framework. We investigate the different choices of relation operators based on linear and bilinear transformations, and also the effects of entity representations by incorporating unsupervised vectors pre-trained on extra textual resources. Our results show several interesting findings, enabling the design of a simple embedding model that achieves the new state-of-the-art performance on a popular knowledge base completion task evaluated on Freebase. Given the recent successes of deep learning in various applications; e.g.

[11, 27, 5], our future work will aim to exploit deep structure including possibly tensor construct in computing the neural embedding vectors; e.g. [12, 29, 13]. This will extend the current multi-relational neural embedding model to a deep version that is potentially capable of capturing hierarchical structure hidden in the input data.

Table 5 shows some concrete examples: top 3 nearest neighbors in the relation space learned by DistMult and DistAdd along with the distance values (Frobenius distance between two relation matrices or Euclidean distance between two relation vectors). We can see that the nearest neighbors found by DistMult are much more meaningful. DistAdd tends to retrieve irrelevant relations which take in completely different types of arguments.