Mixtures of ranking models have been widely used for heterogeneous preferences. However, learning a mixture model is highly nontrivial, especially when the dataset consists of partial orders. In such cases, the parameter of the model may not be even identifiable. In this paper, we focus on three popular structures of partial orders: ranked top-l_1, l_2-way, and choice data over a subset of alternatives. We prove that when the dataset consists of combinations of ranked top-l_1 and l_2-way (or choice data over up to l_2 alternatives), mixture of k Plackett-Luce models is not identifiable when l_1+l_2< 2k-1 (l_2 is set to 1 when there are no l_2-way orders). We also prove that under some combinations, including ranked top-3, ranked top-2 plus 2-way, and choice data over up to 4 alternatives, mixtures of two Plackett-Luce models are identifiable. Guided by our theoretical results, we propose efficient generalized method of moments (GMM) algorithms to learn mixtures of two Plackett-Luce models, which are proven consistent. Our experiments demonstrate the efficacy of our algorithms. Moreover, we show that when full rankings are available, learning from different marginal events (partial orders) provides tradeoffs between statistical efficiency and computational efficiency. 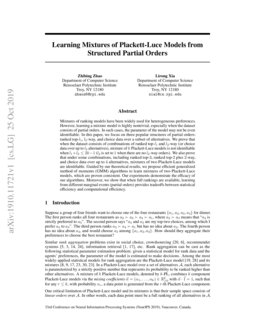 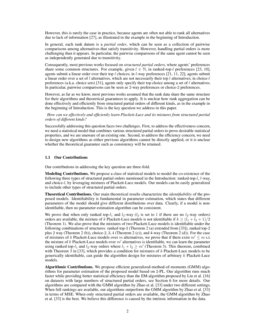 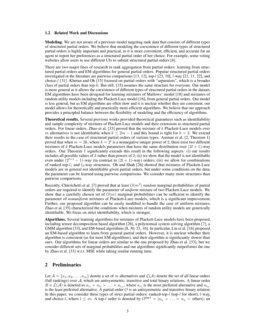 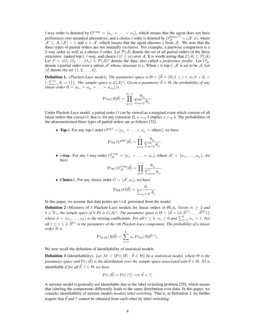 Plackett-Luce model (PL) is one of the most popular models for preferenc...
Zhibing Zhao, et al. ∙

On the identifiability of mixtures of ranking models

We consider an extension of the setting of label ranking, in which the l...
Weiwei Cheng, et al. ∙

This paper is concerned with examining the relationship between users' p...
Naoki Nishimura, et al. ∙

Suppose a group of four friends want to choose one of the four restaurants {a1,a2,a3,a4} for dinner. The first person ranks all four restaurants as a2≻a3≻a4≻a1, where a2≻a3 means that “a2 is strictly preferred to a3”. The second person says “a4 and a3 are my top two choices, among which I prefer a4 to a3”. The third person ranks a3≻a4≻a1 but has no idea about a2. The fourth person has no idea about a4, and would choose a3 among {a1,a2,a3}. How should they aggregate their preferences to choose the best restaurant?

, each alternative is parameterized by a strictly positive number that represents its probability to be ranked higher than other alternatives. A mixture of

One critical limitation of Plackett-Luce model and its mixtures is that their sample space consists of linear orders over A. In other words, each data point must be a full ranking of all alternatives in A. However, this is rarely the case in practice, because agents are often not able to rank all alternatives due to lack of information Pini et al. (2011), as illustrated in the example in the beginning of Introduction.

However, as far as we know, most previous works assumed that the rank data share the same structure for their algorithms and theoretical guarantees to apply. It is unclear how rank aggregation can be done effectively and efficiently from structured partial orders of different kinds, as in the example in the beginning of Introduction. This is the key question we address in this paper.

How can we effectively and efficiently learn Plackett-Luce and its mixtures from structured partial orders of different kinds?

Successfully addressing this question faces two challenges. First, to address the effectiveness concern, we need a statistical model that combines various structured partial orders to prove desirable statistical properties, and we are unaware of an existing one. Second, to address the efficiency concern, we need to design new algorithms as either previous algorithms cannot be directly applied, or it is unclear whether the theoretical guarantee such as consistency will be retained.

Our contributions in addressing the key question are three-fold.

Modeling Contributions. We propose a class of statistical models to model the co-existence of the following three types of structured partial orders mentioned in the Introduction: ranked-top-l, l-way, and choice-l, by leveraging mixtures of Plackett-Luce models. Our models can be easily generalized to include other types of structured partial orders.

Theoretical results. Several previous works provided theoretical guarantees such as identifiability and sample complexity of mixtures of Plackett-Luce models and their extensions to structured partial orders. For linear orders, Zhao et al. (2016) proved that the mixture of k Plackett-Luce models over m alternatives is not identifiable when k≤2m−1 and this bound is tight for k=2. We extend their results to the case of structured partial orders of various types. Ammar et al. (2014, Theorem 1) proved that when m=2k, where k=2l is a nonnegative integer power of 2, there exist two different mixtures of k Plackett-Luce models parameters that have the same distribution over (2l+1)-way orders. Our Theorem 1 significantly extends this result in the following aspects: (i) our results includes all possible values of k rather than powers of 2; (ii) we show that the model is not identifiable even under (2l+1−1)-way (in contrast to (2l+1)-way) orders; (iii) we allow for combinations of ranked top-l1 and l2-way structures. Oh and Shah (2014) showed that mixtures of Plackett-Luce models are in general not identifiable given partial orders, but under some conditions on the data, the parameter can be learned using pairwise comparisons. We consider many more structures than pairwise comparisons.

Recently, Chierichetti et al. (2018) proved that at least O(m2) random marginal probabilities of partial orders are required to identify the parameter of uniform mixture of two Plackett-Luce models. We show that a carefully chosen set of O(m) marginal probabilities can be sufficient to identify the parameter of nonuniform mixtures of Plackett-Luce models, which is a significant improvement. Further, our proposed algorithm can be easily modified to handle the case of uniform mixtures. Zhao et al. (2018b) characterized the conditions when mixtures of random utility models are generically identifiable. We focus on strict identifiability, which is stronger.

Several learning algorithms for mixtures of Plackett-Luce models have been proposed, including tensor decomposition based algorithm

Let A={a1,a2,…,am} denote a set of m alternatives and L(A) denote the set of all linear orders (full rankings) over A, which are antisymmetric, transitive and total binary relations. A linear order R∈L(A) is denoted as ai1≻ai2≻…≻aim, where ai1 is the most preferred alternative and aim is the least preferred alternative. A partial order O is an antisymmetric and transitive binary relation. In this paper, we consider three types of strict partial orders: ranked-top-l (top-l for short), l-way, and choice-l, where l≤m. A top-l order is denoted by Otop-l=[ai1≻…≻ail≻others]; an l-way order is denoted by Ol-way=[ai1≻…≻ail], which means that the agent does not have preferences over unranked alternatives; and a choice-l order is denoted by Ochoice−lA′=(A′,a), where A′⊆A, |A′|=l, and a∈A′, which means that the agent chooses a from A′. We note that the three types of partial orders are not mutually exclusive. For example, a pairwise comparison is a 2-way order as well as a choice-2 order. Let P(A) denote the set of all partial orders of the three structures: ranked top-l, l-way, and choice-l (l≤m) over A. It is worth noting that L(A)⊆P(A). Let P=(O1,O2,…,On)∈P(A)n denote the data, also called a preference profile. Let OsA′ denote a partial order over a subset A′ whose structure is s. When s is top-l, A′ is set to be A. Let [d] denote the set {1,2,…,d}.

Under Plackett-Luce model, a partial order O can be viewed as a marginal event which consists of all linear orders that extend O, that is, for any extension R, a≻Ob implies a≻Rb. The probabilities of the aforementioned three types of partial orders are as follows Xia (2019).

In this paper, we assume that data points are i.i.d. generated from the model.

We now recall the definition of identifiability of statistical models.

Let M={Pr(⋅|→θ):→θ∈Θ} be a statistical model, where Θ is the parameter space and Pr(⋅|→θ) is the distribution over the sample space associated with →θ∈Θ. M is identifiable if for all →θ,→γ∈Θ, we have

A mixture model is generally not identifiable due to the label switching problem (Redner and Walker, 1984), which means that labeling the components differently leads to the same distribution over data. In this paper, we consider identifiability of mixture models modulo label switching. That is, in Definition 3, we further require that →θ and →γ cannot be obtained from each other by label switching.

We propose the class of mixtures of Plackett-Luce models for the aforementioned structures of partial orders. To this end, each such model should be described by the collection of allowable types of structured partial orders, denoted by Φ. More precisely, Φ is a set of u structures Φ={(s1,A1),…,(su,Au)}, where for any t∈[u], (st,At) means structure st over At. For the case of top-l, At is set to be A. Since the three structured considered in this paper are not mutually exclusive, we require that Φ does not include any pair of overlapping structures simultaneously for the model to be identifiable. There are two types of pairs of overlapping structures: (1) (top-(m−1),A) and (m-way,A); and (2) for any subset of two alternatives A′, (2-way,A′) and (choice-2,A′). Each structure corresponds to a number ϕstAt>0 and we require ∑ut=1ϕstAt=1. A partial order is generated in two stages as illustrated in Figure 1: (i) a linear order R is generated by k-PL given →α,→θ(1),…,→θ(k); (ii) with probability ϕstAt, R is projected to the randomly-generated partial order structure (st, At) to obtain a partial order O. Formally, the model is defined as follows.

. The first part is a vector

For any partial order O whose structure is (s,A′), we can also write

where Prk-PL(O|→θ) is the marginal probability of O under k-PL. This is a class of models because the sample space is different when Φ is different.

Let PrM(Oj) denote the probability of Oj under model M, we have

We consider the case where the parameter for first alternative of r-th component is er, where r=1,2,…,k. All other alternatives have the same parameters br=1−erm−1.

More precisely, for any er we define the following function.

Considering that any l-way order implies a choice-l order, we have the following corollary.

Given any k, these results show what structures of data we cannot use if we want to interpret the learned parameter. Next, we will characterize conditions for 2-PL-Φ’s to be identifiable.

For simplicity we use [er,br,cr,dr]⊤ to denote the parameter of rth Plackett-Luce model for a1,a2,a3,a4 respectively, i.e.,

We first show a claim, which is useful to the proof.

In this case, we construct ^F in the following way.