For many tasks and data types, there are natural transformations to which the data should be invariant or insensitive. For instance, in visual recognition, natural images should be insensitive to rotation and translation. This requirement and its implications have been important in many machine learning applications, and tolerance for image transformations was primarily achieved by using robust feature vectors. In this paper we propose a novel and computationally efficient way to learn a local Mahalanobis metric per datum, and show how we can learn a local invariant metric to any transformation in order to improve performance. 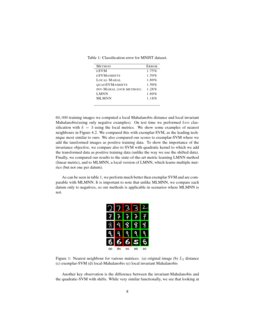 Metric learning is an active research field with many algorithms, generally divided into linear Weinberger and Saul (2009) which learn a Mahalanobis distance, non-linear Kedem et al. (2014) that learn a nonlinear transformation and use L2 distance on the transformed space, and local which learn a metric per datum. The LMNN and MLMM Weinberger and Saul (2009) algorithm are considered the leading metric learning method. For a recent comprehensive survey that covers linear, non-linear and local methods see Bellet et al. (2014).

The exemplar-SVM algorithm Malisiewicz et al. (2012) can be seen as a local similarity measure. This is obtained by maximizing margins, with a linear model, and is weakly supervised as our work. Unlike exemplar-SVM, we learn a Mahalanobis matrix and can learn an invariant metric. Another related work is PMLM Wang et al. (2012), which also finds a local Mahalanobis metric for each data point. However, this method uses global constraints, and therefore cannot work with weakly supervised data, i.e. a single positive example. All the techniques above do not learn local invariant metrics.

The most common way to achieve invariance, or at least insensitivity, to a transformation in computer vision applications is by using hand-crafted descriptors such as SIFT

Lowe (2004) or HOG Dalal and Triggs (2005). Another way, used in convolutional networks Lecun et al. (1998), is by adding pooling and subsampling forcing the net to be insensitive to small translations. It is important to note that transformations such as rotations have a global behaviour, i.e. there is a global consistency between the pixel movement. This global consistency is not totally captured by the pooling and subsampling. As we will see in our experiments, using an invariant metric can be useful even when working with robust features such as HOG.

In this section we will show how a local Mahalanobis distance with maximal margin can be learned in a fast and simple way.

We will assume that we are given a single query image x0 that belong to some class, e.g. a face of a person. We will also be given a set of negative data x1,...,xN that do not belong to that class, e.g. a set of face images of various other people. We will learn a local Mahalanobis metric for x0, M(x0)⪰0, where M⪰0 means M is positive semi-definite. For matrices M,N, we will denote by ||M|| the Frobinous norm ||M||2=∑ijM2ij and by ⟨M,N⟩ the standard inner product ⟨M,N⟩=∑ijMijNij.

We wish to find a Mahalanobis matrix M given the positive datum x0 and the negative data x1,...,nn. Large margin methods have been very successful in metric learning Weinberger and Saul (2009), and more generally in machine learning, therefore, our algorithm will look for the PSD matrix M that maximizes the distance to the closest negative example

The optimization cannot be solved as it is not bounded, since multiplying M by a scalar multiplies the minimum distance by the same scalar. This can be solved by normalizing M to have ||M||=1. As normally done with margin methods, we can minimize the norm under fixed margin constrained instead of maximizing the margin under fixed norm constraint. The resulting objective is

is arbitrary and will be convenient later on. While this is a convex semidefinite programming task, it is very slow for reasonable dimensional data (in the thousands) even for state of the art solvers. This is because PSD solvers apply a projection to the semidefinite cone, performing an expensive singular value or eigen decomposition at each iteration.

Define φ(x)=x⋅xT, a function that maps a column vector to a matrix. This function has the following simple properties:

which can be easily verified using φ(x)ij=xixj. We can define auxiliary labelling y0=−1 and yi=1 for 1≤i≤n. Combining everything objective 5 can be rewritten as

Objective 6 is exactly an SVM problem with quadratic kernel, with bias fixed to one, given inputs ~x0,...,~xn

, proving the theorem. Notice also that for the identity matrix

Now that we have shown how objective 5 can be converted into a standard SVM form, for which efficient solvers exists, we will show how it is the solution to objective 4.

To prove the theorem it suffices to show that the solution is indeed positive semidefinite. A well known observation arrising from the dual formulation of the SVM objective Burges (1998) is that the optimal solution M has the form

, as its only nonzero eigenvalue is

where the positive semidefiniteness in eq. 8 is assured due to the set of PSD matrices being a convex cone. ∎

Combining theorem 1 with theorem 2 we get that in order to solve objective 4 it is enough to run an SVM solver with a quadratic kernel function, thus avoiding any matrix decomposition.

Looking at this as a SVM problem has further benefits. The SVM solvers do not compute M directly, but return the set of support vectors ~xi1,...,~xik and coefficients αi1,...,αik such that M=∑kαikφ(~xik). This allows us to work in high dimension d, where the O(d2) memory needed to store the matrix can be a problem, and can slow computations further. As the rank of the matrix is bounded by the number of support vectors, one can see that in many applications we get a relatively low rank matrix. This bound on the rank can be improved by using sparse-SVM algorithms Cotter et al. (2013). In practice we got low rank matrices without resorting to sparse SVM solvers.

For some applications, we know a priori that certain transformations should have a small effect on the metric. We will show how to include this knowledge into the local metric we learn, learning locally invariant metrices. In section 4 we will see this has a major effect on performance.

Assume we know a set of functions T1,...,Tk that the desired metric should be insensitive to, i.e. d(x,Ti(x)) should be small for all x and i. A canonical example is small rotations and translations on natural images. One of the major issues in computer vision arises from the instability of the pixel representation to these transformations. Various descriptors such as SIFT Lowe (2004) and HOG Dalal and Triggs (2005) offer a more robust representation, and have been highly successful in many computer vision applications. We will show in section 4 that even when using a relatively robust representation such as HOG, learning an invariant metric has a significant impact.

A natural way to mathematically formulate the idea of being insensitive to a transformation, is to require the leading term of the approximation to vanish in that direction. In our case this means

If we return to our basic intuition of the local Mahalanobis matrix as the Hessian matrix ∇2yd(x0,y), we can now state the new local invariant Mahalanobis objective

We will show how by applying a small transformation to the data, we can reduce this to objective 4 which we can solved easily.

since all the other terms vanish. We can now rewrite objective 10 as

As we have already seen in the proof of theorem 2 the optimal solution is of the form M=∑αiφ(zi)=∑αizi⋅zTi. The vector zi is a member of VT so for v∈V

Proving that the solution satisfies the equality constraints. ∎

A few comments are worth noting about this formulation. First the problem may not be linearly separable, although in our experiments with real data we did not encounter any unseperable case. This can be easily solved, if needed, by the standard method of adding slack variables. Second, the algorithm just adds a simple preprocessing step to the previous algorithm and runs in approximately the same time.

We compared running the optimization with an SVM solver Chang and Lin (2011), to solving it as a semidefinite problem and as a quadratic problem (relaxing the semidefinite constraint). The main limitation when running off-the-shelf solvers is memory. Quadratic or semidefinite solvers need a constraint matrix, which in our case is a full matrix of size n×d2 where n is the number of samples and d is the data dimension. We tested all three approaches on the MNIST dataset of dimension 784 using only 5000 negative examples, as this already resulted in a matrix of size 24.6Gb.

This order of magnitude improvement should not be a surprise. It is a well known that while SVM can be solved as a quadratic program, generic quadratic solvers perform much slower then solver designed specifically for SVM.

The MNIST dataset is a well known digit recognition dataset, comprising of 28×28 grayscale images on which we perform deskewing preprocessing. For each of the 60,000 training images we computed a local Mahalanobis distance and local invariant Mahalanobis(using only negative examples). On test time we performed knn classification with k=3 using the local metrics. We show some examples of nearest neighbours in Figure 1. We compared this with exemplar-SVM, as the leading technique most similar to ours. We also compared our scores to exemplar-SVM where we add the tansformed images as positive training data. To show the importance of the invariance objective, we compare also to SVM with quadratic kernel to which we add the transformed data as positive training data (unlike the way we use the shifted data). Finally, we compared our results to the state-of-the-art metric learning LMNN method (linear metric), and to MLMNN, a local version of LMNN, which learns multiple metrics (but not one per datum).

As can be seen in table 1, we perform much better then exemplar SVM and are comparable with MLMNN. It is important to note that unlike MLMNN, we compare each datum only to negatives, so our methods is applicable in scenarios where MLMNN is not.

Another key observation is the difference between the invariant-Mahalanobis and the quadratic-SVM with shifts. While very similar functionally, we see that looking at the problem as a local Mahalanobis matrix gives important intuition, i.e. the way to use the shifted images, that leads to better performance.

LFW is a challenging dataset containing 13,233 face images of 5749 different individuals with a high level of variability. The LFW dataset is divided into 10 subsets, when the task is to classify 600 pairs of images from one subset to same/not-same using the other 9 subsets as training data. We perform the unsupervised LFW task, where we do not use any labelling inside the training images we get, besides the fact that they are different than both test images.

. We compared our results to a cosine similarity baseline, to exemplar-SVM and exemplar-SVM with shifts. We note that we cannot use LMNN or MLMNN on this data, as we only have negative images with a single positive image.

As we can see from table 2, the local Mahalanobis greatly out-performs the exemplar-SVM. We also see that even when using robust features such as HOG, learning an invariant metric improves performance, albeit to a lesser degree.

We showed an efficient way to learn a local Mahalanobis metric given a query datum and a set of negative data points. We have also shown how to incorporate prior knowledge about our data, in particular the transformations to which it should be robust, and use it to learn locally invariant metrics. We have shown that our methods are competitive with leading methods while being applicable to other scenarios where methods such as LMNN and MLMNN cannot be used.