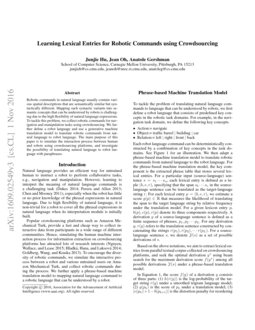 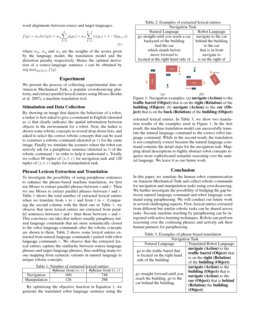 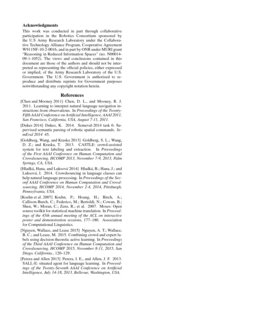 Popular crowdsourcing platforms such as Amazon Mechanical Turk, provide a fast and cheap way to collect interactive data from participants in a wide range of different communities. Hence, simulating the human machine interaction process for information extraction on crowdsourcing platforms has attracted lots of research interests [Nguyen, Wallace, and Lease2015, Hladká, Hana, and Luksová2014, Goldberg, Wang, and Kraska2013]. To encourage the diversity of robotic commands, we simulate the interactive process between a robot and various untrained users on Amazon Mechanical Turk, and collect robotic commands during the process. We further apply a phrase-based machine translation model to mapping natural language command to a robotic language that can be understood by a robot.

Each robot language command can be deterministically constructed by a combination of key concepts in the task domains. See Figure Phrasal Lexicon Extraction and Translation for an illustration. We then adapt a phrase-based machine translation model to translate robotic commands from natural language to the robot language. For the phrase-based machine translation model, the key component is the extracted phrase table that stores several lexical entries. For a particular input (source-language) sentence s=s1⋯sn, each lexical entry is defined as a tuple (b,e,r), specifying that the span sb⋯se in the source-language sentence can be translated as the target-language string r. For each lexical entry p=(b,e,r)

, we estimate a score

that measures the likelihood of translating the span to the target language string by relative frequency under the translation model. For a given lexicon entry

Based on the above notations, we aim to extract lexical entries from parallel textual corpus collected on crowdsourcing platforms, and seek the optimal derivation y∗ using beam search for the maximum derivation score f(y∗) among all possible derivations Y(s) under a phrase-based translation model.

is the log-probability of the target string

r(y) under a smoothed trigram language model; (2) g(pk) is the score of pk under a translation model; (3) |e(pk)+1−b(pk+1)| is the distortion penalty for reordering word alignments between source and target languages.

where wh, wg and wd are the weights of the scores given by the language model, the translation model and the distortion penalty respectively. Hence the optimal derivation of a source-language sentence s can be obtained by argmaxy∈Y(s)f(y).

By showing an image that depicts the behaviour of a robot, a turker is first asked to give a command in English (denoted as s) that clearly indicates the spatial information between objects in the environment for a robot. Next, the turker is shown some robotic concepts in several drop-down lists, and asked to select the correct robotic concepts that can be used to construct a robotic command (denoted as r) for the same image. Finally we simulate the scenario where the robot can actively ask for a paraphrase sentence (denoted as t) of the robotic command r in order to help it understand s. Totally we collect 88 tuples of (s,t,r) for navigation task and 120 tuples of (s,t,r) tuples for manipulation task.