In this communication, we describe a novel technique for event mining using a decomposition based approach that combines non-parametric change-point detection with LDA. We prove theoretical guarantees about sample-complexity and consistency of the approach. In a companion paper, we will perform a thorough evaluation of our approach with detailed experiments. 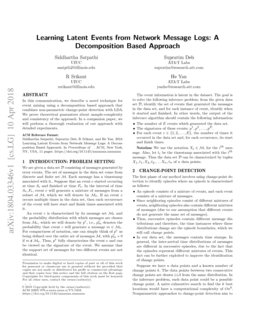 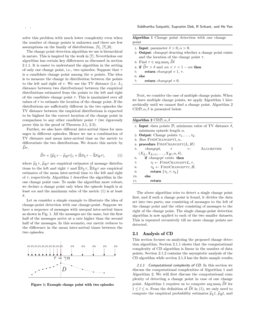 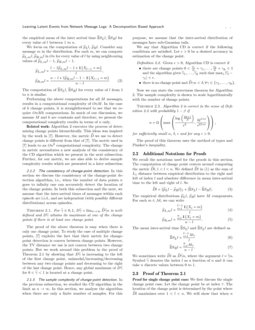 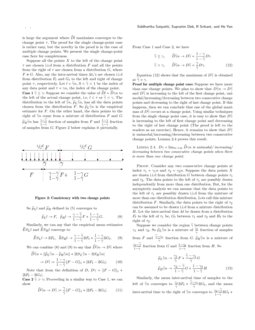 Change point detection based on method of moment estimators

We propose a method to infer the presence and location of change-points ...
Paromita Dubey, et al. ∙

In this paper, we use and further develop upon a recently proposed multi...
Shoaib Bin Masud, et al. ∙

We are given a data set D consisting of messages generated by error events. The set of messages in the data set come from discrete and finite set M. Each message has a timestamp associated with it.. Suppose that an event e started occurring at time Se and finished at time Fe. In the interval of time [Se,Fe], event e will generate a mixture of messages from a subset of M, which we will denote by Me. If an event e occurs multiple times in the data set, then each occurrence of the event will have start and finish times associated with it.

An event e is characterized by its message set Me

and the probability distribution with which messages are chosen from

Me, which we will denote by p(e), i.e., p(e)m denotes the probability that event e will generate a message m∈Me. For compactness of notation, one can simply think of p(e) as being defined over the entire set of messages M, with p(e)m=0 if m∉Me. Thus, p(e) fully characterizes the event e and can be viewed as the signature of the event. We assume that the support set of messages for two different events are not identical.

Notation: We use the notation Xi∈M, for the ith message. Also, let ti be the timestamp associated with the ith message. Thus the data set D can be characterized by tuples (X1,t1),(X2,t2),…(Xn,tn) of n data points.

The first phase of our method involves using change-point detection to identify episodes where an episode is characterized as follows:

Suppose we have n data points and a known number of change points k. The data points between two consecutive change points are drawn i.i.d from the same distribution. In the inference problem, each data point could be a possible change point. A naive exhaustive search to find the k best locations would have a computational complexity of O(nk). Nonparametric approaches to change-point detection aim to solve this problem with much lower complexity even when the number of change points is unknown and there are few assumptions on the family of distributions, (Kawahara and Sugiyama, 2012), (S. Matteson and A. James, 2013),(Lung-Yut-Fong et al., 2011).

The change point detection algorithm we use is hierarchical in nature. This is inspired by the work in (S. Matteson and A. James, 2013). Nevertheless our algorithm has certain key differences as discussed in section 2.1.1. It is easier to understand the algorithm in the setting of only one change point, i.e., two episodes. Suppose that τ is a candidate change point among the n points. The idea is to measure the change in distribution between the points to the left and right of τ. We use the TV distance (i.e. L1

τ. This is maximized over all values of τ to estimate the location of the change point. If the distributions are sufficiently different in the two episodes the TV distance between the empirical distributions is expected to be highest for the correct location of the change point in comparison to any other candidate point τ (we rigorously prove this in the proof of Theorem 2.1, 2.3).

where ˆpL(τ), ˆpR(τ) are empirical estimates of message distributions to the left and right τ and ˆESL(τ), ˆESR(τ) are empirical estimates of the mean inter-arrival time to the left and right of τ, respectively. Algorithm 1 describes the algorithm in the one change point case. To make the algorithm more robust, we declare a change point only when the episode length is at least αn and the maximum value of the metric (1) is at least δ.

This section focuses on analyzing the proposed change detection algorithm. Section 2.1.1 shows that the computational complexity of CD algorithm is linear in the number of data points. Section 2.1.2

contains the asymptotic analysis of the CD algorithm while section

In this section we discuss the computational complexities of Algorithm 1 and Algorithm 2. We will first discuss the computational complexity of detecting a change point in case of one change point. Algorithm 1 requires us to compute argmaxlˆD(l) for 1≤l≤n. From the definition of ˆD(l) in (1), we only need to compute the empirical probability estimates ˆpL(l), ˆpR(l), and the empirical mean of the inter arrival time ˆESL(l), ˆESR(l) for every value of l between 1 to n.

We focus on the computation of ˆpL(l), ˆpR(l). Consider any message m in the distribution. For each m, we can compute ˆpL,m(l), ˆpR,m(l) in O(n) for every value of l by using neighbouring values of ˆpL,m(l−1), ˆpR,m(l−1).

The computation of ˆESL(l), ˆESR(l) for every value of l from 1 to n is similar.

2.1.2. The consistency of change-point detection

In this section we discuss the consistency of the change-point detection algorithm, i.e., when the number of data points n goes to infinity one can accurately detect the location of the change points. In both this subsection and the next, we assume that the inter-arrival times of messages within each episode are i.i.d., and are independent (with possibly different distributions) across episodes.

2.1.3. The sample complexity of change-point detection

In the previous subsection, we studied the CD algorithm in the limit as n→∞. In this section, we analyze the algorithm when there are only a finite number of samples. For this purpose, we assume that the inter-arrival distribution of messages have sub-Gaussian tails.

We say that Algorithm CD is correct if the following conditions are satisfied. Let ϵ>0 be a desired accuracy in estimation of the change point.

Given ϵ>0, Algorithm CD is correct if

Now we can state the correctness theorem for Algorithm 2. The sample complexity is shown to scale logarithmically with the number of change points.

Algorithm 2 is correct in the sense of Definition 2.2 with probability (1−β) if

for sufficiently small α, δ, ϵ and for any c>0.

The proof of this theorem uses the method of types and Pinsker’s inequality.

We recall the notations used for the proofs in this section. The computation of change point centers around computing the metric ˆD(l),1<l<n. We defined ˆD(l) in (1) as the sum of L1 distance between empirical distribution to the right and left of index l and absolute difference in mean inter-arrival time to the left and right of l. So

We sometimes write ˆD(l) as ˆD(˜γn), where the argument l=˜γn. Symbol ˜γ denotes the index l as a fraction of n and it can take n discrete values between 0 to 1.

Similarly, we can say that the empirical mean estimates ˆESL(l) and ˆESR(l) converge to

D(γ)=limn→∞ˆD(γn) is unimodal/ increasing/ decreasing between two consecutive change points when there is more than one change point.

for some constants ai,bi∈R,i∈{1,2,…,M+1}. Function D(˜γ) from (15) is only well defined over γ1<˜γ<γ2. For the purpose of this proof, with some abuse of notation we assume the function D(γ) to have the same definition outside [γ1,γ2]. We then show that D(˜γ) defined in (15) is unimodal/increasing/decreasing as a function of ˜γ between (0,1). This would naturally imply that D(˜γ) is unimodal/increasing/decreasing in [γ1,γ2]. The rest of the proof deals with this analysis.

Without loss of generality we can assume ai>0,∀i. We can expand (15) as

Finally, in Lemma 2.7 we show that the estimated change point ˆγ is close to γ with high probability.

We analyse each event separately in (19). Suppose no change point exists and say all the data points are drawn from the same distribution F. We use Sanov’s theorem and Pinsker’s inequality to show that

Now, we look at the case when a change point exists at γn. We assume that α is chosen such that α+ϵ<γ<1−(α+ϵ). Hence

Finally, under the assumptions

we can derive the sample complexity result for one change point case from (24).

Lemma 2.9 below can be proved in a similar way to lemma 2.6 in single change point case.

We upper bound the probability that Algorithm 2 is not correct. From definition 2.2, this happens when

We assume that XL,…,XH is at least of size αn or an episode is at least αn samples long. Let D∗ denote the minimum value of metric D at a global maxima for the reduced problem of XL,…,XH over all possible values of L,H for which Algorithm 1 is applied. From the correctness result for one change point, we have that

Combining the above two cases, we get

Finally, under the assumptions

we can derive the sample complexity result for k change points from (28).