Learning Interpretable representation in medical applications is becoming essential for adopting data-driven models into clinical practice. It has been recently shown that learning a disentangled feature representation is important for a more compact and explainable representation of the data. In this paper, we introduce a novel adversarial variational autoencoder with a total correlation constraint to enforce independence on the latent representation while preserving the reconstruction fidelity. Our proposed method is validated on a publicly available dataset showing that the learned disentangled representation is not only interpretable, but also superior to the state-of-the-art methods. We report a relative improvement of 81.50 of disentanglement, 11.60 with a few amounts of labeled data. 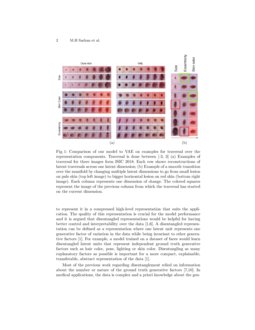 Data-driven models with the help of Deep Learning (DL) are affecting wide areas of scientific research and the medical domain is no exception in this matter. However, in healthcare, developing a machine learning algorithm with expert level performance is important but not enough for the adoption of the algorithm when the issues of trust and explainability are not taken into consideration

[12]. Explainability of a model is approached either by 1) explicitly learning it by model design or 2) after model design such as using gradient-based localization [13].

Most of the previous work regarding disentanglement relied on information about the number or nature of the ground truth generative factors [7, 10]. In medical applications, the data is complex and a priori knowledge about the generative factors is mostly unavailable. Recently, multiple models for unsupervised disentangled feature learning were proposed [3, 6, 8, 2]. β-VAE [6] is proposed as a modification on vae [9] where the parameter β is used to introduce more emphasis on the KL-Divergence part of the VAE objective. This enforces the posterior to match the factorized Gaussian prior which constraints the bottleneck representation to be factorized while still reconstructing the data. Higher β values encourage more disentangled representations with a trade-off on the reconstruction error. In β-Total Correlation VAE (β-TCVAE) [2], the training is focused on the total correlation part of KL term which is responsible for the factorized representation. This lowers the trade-off on the reconstruction fidelity proposed by β-VAE. btcvae is validated on examples from a controlled environment with clear factors of generation. This doesn’t represent the complexity of medical data and should be addressed.

In this work, we propose a framework for learning disentangled representations in medical imaging in an unsupervised manner. To our knowledge, this is the first work that analyzes the strength of unsupervised disentangled feature representations in medical imaging and proposes a framework that is well suited to medical applications. We propose a novel residual adversarial VAE with total correlation constraint This enhances the fidelity of the reconstruction and captures more details that describe better the underlying generative factors.

Let xn∈X,n=1,...,N be a set of images generated by combinations of K ground-truth generative factors V=(v1,...,vK). Our aim is to build an unsupervised generative model that utilizes only the images in X

z∼qϕ(z|x)∈Rd allowing us to have better control and interpretability of the latent space. It is worth mentioning the latent generative factors capture both disentangled and entangled factors. To realize our aim, we follow the concept of bvae in learning a posterior distribution that could be used to generate images from X. The posterior representation is approximated by qϕ(z|x). The model is built such that the generative factors V are represented by the posterior bottleneck in a disentangled fashion.

where θ and ϕ are trainable weights of encoder and decoder respectively, DKL

is the Kullback-Leibler divergence. When

The second term Iq(z,x) is the mutual information between the data and the latent variable. Penalizing this term reduces the amount of information related to x that are represented in z. Which in turn could decrease the reconstruction performance. The third term DKL(q(z)||∏jq(zj)) is the total correlation (TC) which is a generalization of mutual information to more than two variables. Penalizing TC forces independence in the represented factors. The last term is referred to as dimension-wise KL and is applied on individual latent dimensions. We use btcvae for its good results on disentanglement on various datasets while having better reconstruction that other disentanglement models and for the parameter-less approximation of q(z). For more details about the DKL decomposition and the approximation of q(z) the reader is referred to [2].

, we add a discriminator network on top of btcvae model. The discriminator is trained to decide whether an input image is generated synthetically or sampled from the real data distribution. We employ adversarial loss scheme for the training. The discriminator in this scenario has to learn implicitly a rich similarity metric based on features extracted from the images rather than relying only on pixel-wise similarity. This does not only improve generated images visually, but also learns a richer representation in the code

z [11]. This is because the pixel-wise loss acts as a content loss while the discriminator loss acts as a style loss [4]. Moreover, we incorporate residual blocks rather than convolutional layers applied in [2]. This is because residual blocks have shown a better flow of the gradients. This limits the problems related to vanishing/exploding gradients [5] and is being used in state-of-the-art Generative Adversarial Nets (GANs) literature [15] for more stable training. We denote Dis(.;ψ) to the discriminator network described by trainable parameters ψ, x is a real image sampled from p(x) and ^x is the reconstructed image from pθ(x|z). The final objective is

The model is trained by alternating between Lgen and Ldisc optimization. We use pixel-wise l2-distance between x and ^x as Lrec.

To quantitatively evaluate the disentanglement quality, we report the Mutual Information Gap (MIG) metric as proposed and suggested in [2]. As opposed to the disentanglement metric in [6], MIG takes axis-alignment (one vk is captured by one zj) into consideration, and it is unbiased to hyper-parameters opposite to [6, 8]. MIG measures the mutual information (MI) between zj and the known generative factor vk, then the difference between the two highest MIs of a generative factor is calculated, and normalized then by the entropy of vk. The average MIG is then computed as

where H(⋅) is the entropy, I(⋅,⋅) is the mutual information. For our experiments, we set the generative factors as follows:

In addition, we report the Peak signal-to-noise ratio (PSNR), and Normalized Mutual Information (NMI), and Accuracy (ACC) to evaluate the reconstruction error, clustering, and classification, respectively.

We compare the proposed model to two representation learning models. The first is vae [9] model which does not take disentanglement into account explicitly. The second model is btcvae [2] which adds constraints on the representation to disentangle the components. Further, We employ two variations of our proposed method with bottleneck residual blocks [5]; 1) without the adversarial loss in Equation 3 denoted as Ours-resnet; and 2) with the adversarial loss denoted as Ours-adv.

We implement the same architecture appeared in the CelebA experiments in [2] for both vae and btcvae. For our proposed method, we replace the convolutional layers with bottleneck residual blocks for both Ours-resnet and Ours-adv, while the additional discriminator network in Ours-adv has the same architecture of the encoder except for the last layer which has a single output. All models are trained using Adam optimizer for 100K iterations with a minibatch size of 256, and a learning rate of 1e−4. β and d are set to 6 and 32, respectively. Note that we employ leakyReLU in our Ours-adv which has been successfully applied in the adversarial training literature.

cf Table.1). We notice improvements over the btcvae in terms of disentanglement with a relative improvement of 81.6% and 161.8% on MIGp and MIGhf

In order to show that the disentangled representation is rather capturing some meaningful generative factors, which might be relevant to the task at hand. We design two use-cases in both unsupervised and supervised paradigms. For the clustering use-case, we utilize the learned representations to fit a Gaussian Mixture Model (GMM) with 7 components and assign a label to each data point. NMI is then calculated between assigned labels and ground-truth labels. We report an average of 10 realizations. Regarding the classification use-case, we utilize the learned representations of a few amounts of labeled data to train a multi-layer perceptron (MLP) on

10% of the data and evaluate it on the remaining 90% of the data. 10-fold stratified cross-validation is performed.

The model gives a relative improvement of 11.6% and 2% on the NMI and ACC, respectively. This could be attributed to the quality of the learned representation where features responsible for the pathologies are captured by disentanglement models as generative factors.

We qualitatively examine the interpretability of the learned representations by manipulating the latent code. For instance, Fig. (a)a shows a comparison of the traversal between the proposed model and VAE. We notice that the dimension responsible for changing skin color has some entanglement with eccentricity and size in the case of VAE. In contrast, we can see in our proposed model that the size and eccentricity are barely changed when the skin color dimension is changed. For eccentricity, we notice in the case of VAE that fewer variations are captured such as the absence of the horizontal elliptic lesions that are captured with the proposed approach.

In Fig. (b)b, we show the possibility of generating images with specific features by smoothly moving over the manifold of the representations. We show the transition of a small lesion on pale skin to a big horizontal lesion on reddish skin by changing multiple latent dimensions responsible for each feature. Having this control over the representation does not only give the ability to generate images with specific known features, but also gives an interpretable representation of the data which can be utilized in many applications.

In this paper, we introduce a novel adversarial vae with a total correlation constraint to enforce disentanglement on the latent representation while preserving the reconstruction fidelity. The proposed framework is evaluated on skin lesions dataset and shows improvements over other state-of-the-art methods in terms of disentanglement. The disentangled representations learned by the proposed method has shown remarkable performance in both unsupervised clustering and supervised classification. We believe that our work would pave the way for other researchers to further investigate this interesting direction of research. One potential direction is utilizing the control over the generative factors for data augmentation.