We introduce a new strategy designed to help physicists discover hidden laws governing dynamical systems. We propose to use machine learning automatic differentiation libraries to develop hybrid numerical models that combine components based on prior physical knowledge with components based on neural networks. In these architectures, named Deep Neural Numerical Models (DNNMs), the neural network components are used as building-blocks then deployed for learning hidden variables of underlying physical laws governing dynamical systems. In this paper, we illustrate an application of DNNMs to upper ocean dynamics, more precisely the dynamics of a sea surface tracer, the Sea Surface Height (SSH). We develop an advection-based fully differentiable numerical scheme, where parts of the computations can be replaced with learnable ConvNets, and make connections with the single-layer Quasi-Geostrophic (QG) model, a baseline theory in physical oceanography developed decades ago. 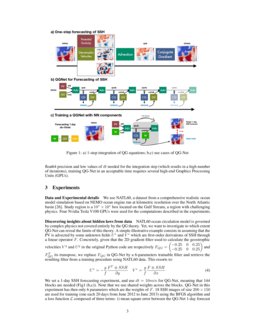 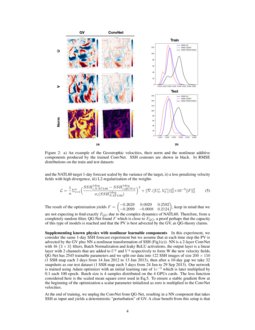 Physical modeling is still one of the most striking examples where humans are a long way ahead of pure Machine Learning (ML) systems. Recently, numerous research efforts have been directed into designing ML algorithms, especially deep neural networks, that can learn the basic laws of physics from data Wu and Tegmark (2018); Iten et al. (2018); Greydanus et al. (2019); Wang et al. (2019). These works mostly agree on the importance of interpretability and respect of physical constraints, which is still not straightforward when using black-box regressors such as neural networks Carleo et al. (2019)

. In particular, many works focused on the case where data describing the dynamical system of interest is assumed to be governed by a system of partial differential equations (PDEs) and where a certain physical a priori is known

Brunton et al. (2016); Raissi (2018); Long et al. (2019); Lu et al. (2019). From the perspective of ocean sciences, many results shown in the aforementioned references were run on toy models, and more investigation is needed on real ocean satellite-derived or model simulation data. Few works set the foot in this direction: in de Bezenac et al. (2017) ideas from optical flow video prediction were linked to an advection-diffusion model and considered to forecast Sea Surface Temperature (SST), while in Ayed et al. (2019); Ouala et al. (2019) the goal was to infer the dynamics of a latent variable from partial and noisy observations of SST and Sea Level Anomaly (SLA) respectively.

The general idea behind the present work consists in standing on the shoulders of the current understanding of ocean variables by physical oceanographers, and include as much as we can of their knowledge in the design of our NN architecture. In this paper, we demonstrate this strategy on upper ocean dynamics, and more precisely the dynamics of the Sea Surface Height (SSH). We present a fully-differential advection-diffusion architecture which generalizes the Quasi-Geostrophy (QG) theory, one of the main baselines for forecasting SSH Ubelmann et al. (2015). To ensure numerical stability and stay close to realistic solutions, ideas from numerical schemes were considered in developing the architecture at the expense of depth and memory load.

Automatic differentiation (AD) has a long history in the numerical modeling community. In ocean sciences for instance, OpenAD an open source code for AD has been used to calculate adjoints of popular general circulation models such as MITgcm

. However, these tools do not account for the training of neural networks straightforwardly, and are in general designed to handle Fortran based codes. We refer by Deep Neural Numerical Models (DNNMs) to fully differentiable numerical models that can incorporate easily trainable NNs. Depending on the complexity of the involved PDE equations, corresponding DNNMs require a considerable amount of technical and engineering work, to rewrite standard numerical model codes into fully differentiable architectures that allows training NNs by backpropagation. This could not be possible without the ongoing flare in the Deep Learning community and in particular in AD librairies such as PyTorch and Tensorflow

where ∇2 is the 2D Laplacian operator, U and V are components of the nondivergent velocity field, and D the diffusion coefficient. These equations describe the evolution of the flow field Ψ through the advection-diffusion of a proxy variable Φ obtained by a given transformation T1. In case T1 is the identity, we fall into classical models as the one studied in de Bezenac et al. (2017). Using PyTorch, we develop a DNNM where the discretization of the PDE involves the use of a 3rd order upwind scheme and a 1st order Euler scheme in time. This scheme is stable as long as the Courant–Friedrichs–Lewy condition (CFL) is satisfied, implying that model integration is done in small steps dt. Ψ at each dt is obtained through the inversion of Equation 1a, for example if T1 is linear, we use Conjugate Gradient (CG) method with constant boundary conditions. In practice, given a good initial Ψ guess, the CG is stopped after few iterations (less than 5) to permit real-time execution and to avoid computational burden.

. Recently, this model was found to be a good baseline to dynamically interpolate SSH fields through temporal gaps

Ubelmann et al. (2015). To forecast SSH dynamics, the numerical model uses q the Potential Vorticity (PV) as a proxy variable that is advected by Geostrophic Velocities (GV). This process is governed by the following equations Smith and Vallis (2001); Hua and Haidvogel (1986); Fu and Flierl (1980):

where h is the SSH field, g is the gravity constant, f is the Coriolis parameter, LR is the first Rossby deformation radius. Ug and Vg are the Geostrophic Velocities, and βVg is a term that accounts for meridional advection of PV. This model is in accordance with the DNNM framework presented above. We find the correspondant T1, T2, T3 and call it QG-Net. Gradients and Laplacians were rewritten into filter convolutions. One CG iteration can already give an acceptable solution if the guess field respects the following pattern:

therefore we used the equations of the CG algorithm Shewchuk and others (1994) to write the equivalent of one CG iteration. The resulting architecture is illustrated in Fig1(a,b). It benefits from high flexibility, since several building blocks can be interchanged with ConvNets, making it a playground for several modeling choices such as the ones exposed in the next section. Yet, due to the high memory cost of using float64 precision and low values of dt needed for the integration step (which results in a high number of iterations), training QG-Net in an acceptable time requires several high-end Graphics Processing Units (GPUs).

We use NATL60, a dataset from a comprehensive realistic ocean model simulation based on NEMO ocean engine run at kilometric resolution over the North Atlantic basin Molines (2018). Study region is a 10∘×10∘ box located on the Gulf Stream, a region with challenging physics. Four Nvidia Tesla V100 GPUs were used for the computations described in the experiments.

NATL60 ocean circulation model is governed by complex physics not covered entirely by the QG theory. Yet, we want to investigate to which extent QG-Net can reveal the limits of this theory. A simple illustrative example consists in assuming that the PV is advected by some unknown fields U∗ and V∗ which are first-order derivations of SSH through a linear operator F. Concretely, given that the 2D gradient filter used to calculate the geostrophic velocities Vg and Ug in the original Python code are respectively FQG=(−0.2500.25−0.2500.25) and FTQG its transpose, we replace FQG in QG-Net by a 6-parameters trainable filter and retrieve the resulting filter from a training procedure using NATL60 data. This resorts to:

We set a 1-day SSH forecasting experiment, and use dt=10min for QG-Net, meaning that 144 blocks are needed (Fig1 (b,c)). Note that we use shared weights across the blocks. QG-Net in this experiment has then only 6 parameters which are the weights of F. 18 SSH images of size 200×150

composed of three terms: i) mean square error between the QG-Net 1-day forecast and the NATL60 target 1-day forecast scaled by the variance of the target, ii) a loss penalizing velocity fields with high divergence, iii) L2-regularization of the weights

The result of the optimization yields F=(−0.26290.00290.2592−0.2099−0.00080.2124), keep in mind that we are not expecting to find exactly FQG due to the complex dynamics of NATL60. Therefore, from a completely random filter, QG-Net found F which is close to FQG, a proof perhaps that the capacity of this type of models is reached and that the PV is best advected by the GV, as QG-theory claims.

In this experiment, we consider the same 1-day SSH forecast experiment but we assume that at each time step the PV is advected by the GV plus NN a nonlinear transformation of SSH (Fig1(c)). NN is a 2-layer ConvNet with 16 {3×3}

filters, Batch Normalization and leaky ReLU activations, the output layer is a linear layer with 2 channels that are added to

which is later multiplied by 0.1 each 100 epoch. Batch size is 4 samples distributed on the 4 GPUs cards. The loss function considered here is the scaled mean square error used in Eq.

5. To ensure a stable gradient flow at the beginning of the optimization a scalar parameter initialized as zero is multiplied to the ConvNet velocities.

At the end of training, we unplug the ConvNet from QG-Net, resulting in a NN component that takes SSH as input and yields a deterministic "perturbation" of GV. A clear benefit from this setup is that the trained component can be plugged back in the original Python code and avoid computational load at test time. Fig2(b) presents the RMSE distributions of the standard QG, our QG-Net and a naive constant model (persistance). Adding the ConvNet component to the GV has slightly improved the standard QG model, this is an indication that a nonlinear velocity term can model SSH dynamics beyond the standard QG. Fig2(a) shows an example of the additional velocities produced by the ConvNet along with GV for the same SSH input. We observe that the output of the ConvNet has a significant amplitude along SSH contours (ocean fronts), and that the fields follow a special pattern that depends on GV and are not completely random. Interpreting the ConvNet in this experiment is not straightforward and calls for more investigation to convert it into tangible equations that could be inspected by physical oceanographers.

We show that combining deep learning automatic differentiation libraries and numerical models could help designing hybrid models with trainable parameters and represent a test bed to evaluate established physical theories or seek intuition for developing new ones. We believe that this work represents a modest step for helping physicists developing innovative physical models.

The authors would like to thank Clément Ubelmann from CLS for the 1-layer QG Python code that can be found here https://github.com/redouanelg/qgsw-DI. Most of the computations presented in this paper were performed using the GRICAD infrastructure (https://gricad.univ-grenoble-alpes.fr), which is partly supported by the Equip@Meso project (reference ANR-10-EQPX-29-01) of the programme Investissements d’Avenir supervised by the Agence Nationale pour la Recherche. R. Lguensat is funded through a postdoctoral grant from Centre National d’Etudes Spatiales (CNES), he also acknowledges the support of NVIDIA Corporation under the NVIDIA GPU Grant program. S. Metref is funded by ANR through contract number ANR-17- CE01-0009-01. R. Fablet was supported by Labex Cominlabs (grant SEACS), CNES (grant OSTST-MANATEE) and ANR (EUR Isblue and Melody).