Learning from past scans: Tomographic reconstruction to detect new structures

The need for tomographic reconstruction from sparse measurements arises when the measurement process is potentially harmful, needs to be rapid, or is uneconomical. In such cases, prior information from previous longitudinal scans of the same or similar objects helps to reconstruct the current object whilst requiring significantly fewer `updating' measurements. However, a significant limitation of all prior-based methods is the possible dominance of the prior over the reconstruction of new localised information that has evolved within the test object. In this paper, we improve the state of the art by (1) detecting potential regions where new changes may have occurred, and (2) effectively reconstructing both the old and new structures by computing regional weights that moderate the local influence of the priors. We have tested the efficacy of our method on synthetic as well as real volume data. The results demonstrate that using weighted priors significantly improves the overall quality of the reconstructed data whilst minimising their impact on regions that contain new information. 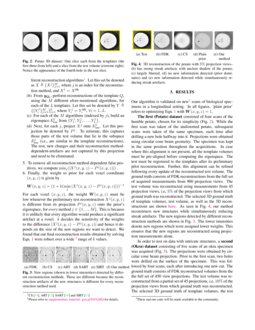 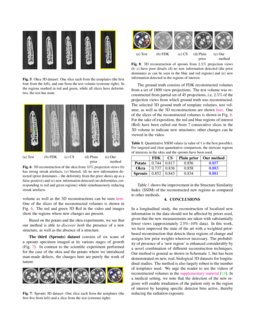 In many applications of tomography, the acquired projections are either ...
D. M. Pelt, et al. ∙

Current research seeks to significantly reduce the number of tomographic measurements required to reconstruct an object with adequate fidelity. Sub-Nyquist sampling requires prior information or making some assumptions about the object shape. Compressive Sensing (CS) [1] assumes sparsity in the computed image, often via information redundancy that is optimised through some mathematical transform. The measurement set can be reduced further by prior based techniques [2, 3, 4, 5, 6], that utilize previously scanned spatial data to reconstruct new volumes from sparse sets of additional measurements. A cost function used in these iterative reconstruction schemes penalizes any dissimilarity between the templates (prior) and the volume to be reconstructed (test). Another class of methods [7, 8] impose information-theoretic similarity between the prior and the test volume. In all of these methods, it is critical and challenging to choose an optimal representative template. Recent work [9, 10, 11]

relaxed the above limitation by building dictionary based and eigenspace based priors.

showed that the eigenspace based prior is better able to accommodate the variation in the match of a test volume to a set of templates. The technique assumed the new test volume lies within the space spanned by the eigenvectors of multiple representative templates, effectively capturing the global properties of this set of templates. However, even with that approach, the global prior still imposes an inflexible constant weight when reconstructing the data. This results in inaccurate reconstruction for those critical regions where the test data may be marginally different from any of the prior data. In all prior based methods, the overall reconstruction improves, however, there is a likelihood of suppressing new features in the test object that may develop over time (refer Fig.

). This scenario is particularly relevant in longitudinal studies, wherein the same object is scanned on multiple occasions to monitor for small changes that may occur over time.

Contributions: In this work, we use, in a novel way, sparse projections of the test volume to first detect the regions in the test volume that may be different from all priors. Those regions are the most likely ones to be of interest in any longitudinal study. We compute spatially varying weights to temper the role played by the priors across different regions of the object. With these weights, we blend the advantages of existing reconstruction algorithms to create an optimal reconstruction. Our reconstructions are validated on new, real, biological 3D datasets, and existing medical datasets.

2 Weighted prior based reconstruction

When an object is scanned multiple times, a set of high quality reconstructions may be chosen as templates for the reconstruction of future scan volumes, which, in turn, may be scanned using far fewer measurements. The eigenspace Ehigh of the L prior templates Q1,Q2,...,QL is pre-computed. This is used as an orthogonal basis to represent the unknown test volume. While the prior compensates very well for the new sparse measurements, it dominates the regions with new changes masking the signal. Our weighted prior based reconstruction overcomes (details appear here) this limitation by minimizing:

Here, x=Ψθ denotes the reconstructed volume, y its measured tomographic projections, θ the sparse coefficients of x, Ψ the basis in which data is assumed to be sparse, Φ a matrix modelling the measurement geometry, μ the mean of the templates, Vi the ith principal component of the set of templates, α the eigen coefficients, and λ1, λ2 are tunable weights given to the sparsity and prior terms respectively. The unknowns θ and α are solved by alternate minimization. θ is solved for using the basis pursuit CS solver [12].

The key to our method is the discovery of the weights W, a matrix with varying weights assigned to individual voxels of the prior. W is first constructed using some preliminary reconstruction methods, following which Eqn. 1 is used to get the final reconstruction. In regions of change in test data, we want lower weights for the prior when compared to regions that are similar to the prior.

The test volume is unknown to begin with. Hence, it is not possible to decipher the precise regions in it that are new, and different from all the templates. Schematic 1 describes the evolution of the procedure used to detect the new regions in the unknown volume. We start with Xfdk, the initial backprojection reconstruction of the test volume using the Feldkamp-Davis-Kress (FDK) algorithm [13] in an attempt to discover the difference between the templates and the test volume.

However, the difference between Xfdk and its projection onto the eigenspace Ehigh will detect the new regions along with many false positives (false new regions). This is because, while Xfdk has many artefacts arising from sparse measurements, the eigenspace Ehigh is built from high quality templates. To discover unwanted artifacts of the imaging geometry, in a counter intuitive way, we generate low quality reconstruction of the templates.

[t!]0.5 Schematic 1: Motivation behind our algorithm. (The plus ⊕ and the minus ⊖ operators are placeholders; precise details available in Section 2.2).

For each voxel (x,y,z), the weight W(x,y,z) must be low whenever the preliminary test reconstruction Xj(x,y,z) is different from its projection Pj(x,y,z) onto the prior’s eigenspace, for every method j∈{1,...,M}. This is because it is unlikely that every algorithm would produce a significant artefact at a voxel. k decides the sensitivity of the weights to the difference |Xj(x,y,z)−Pj(x,y,z)| and hence it depends on the size of the new regions we want to detect. We found that our final reconstruction results obtained by solving Eqn. 1 were robust over a wide 222Please refer to supplementary material: goo.gl/D4YjMQ for details. range of k values.

Our algorithm is validated on new333These and our code will be made available to the community. scans of biological specimens in a longitudinal setting. In all figures, ‘plain prior’ refers to optimizing Eqn. 1 with W(x,y,z)=1.

The first (Potato) dataset consisted of four scans of the humble potato, chosen for its simplicity (Fig. 2). While the first scan was taken of the undistorted potato, subsequent scans were taken of the same specimen, each time after drilling a new hole halfway into it. Projections were obtained using circular cone beam geometry. The specimen was kept in the same position throughout the acquisitions. In case where this alignment is not present, all the template volumes must be pre-aligned before computing the eigenspace. The test must be registered to the templates after its preliminary pilot reconstruction. Further, this alignment can be refined following every update of the reconstructed test volume. The ground truth consists of FDK reconstructions from the full set of acquired measurements from 900 projection views. The test volume was reconstructed using measurements from 45 projection views, i.e, 5% of the projection views from which ground truth was reconstructed. The selected 3D ground truth of template volumes, test volume, as well as the 3D reconstructions are shown here. As seen in Fig. 4, our method reconstructs new structures while simultaneously reducing streak artefacts. The new regions detected by different reconstruction methods are shown in Fig. 3. The lower intensities denote new regions which were assigned lower weights. This ensures that the new regions are reconstructed using projection measurements alone.

In order to test on data with intricate structures, a second (Okra) dataset consisting of five scans of an okra specimen was acquired (Fig. 5). The projections were obtained by circular cone beam projection. Prior to the first scan, two holes were drilled on the surface of the specimen. This was followed by four scans, each after introducing one new cut. The ground truth consists of FDK reconstructed volumes from the the full set of 450 view projections. The test volume was reconstructed from a partial set of 45 projections, i.e, 10% of the projection views from which ground truth was reconstructed. The selected 3D ground truth of template volumes, the test volume as well as the 3D reconstructions can be seen here. One of the slices of the reconstructed volumes is shown in Fig. 6. The red and green 3D RoI in the video and images show the regions where new changes are present.

Based on the potato and the okra experiments, we see that our method is able to discover both the presence of a new structure, as well as the absence of a structure.

The third (Sprouts) dataset consists of six scans of a sprouts specimen imaged at its various stages of growth (Fig. 7). In contrast to the scientific experiment performed for the case of the okra and the potato where we introduced man-made defects, the changes here are purely the work of nature.

Table 1 shows the improvement in the Structure Similarity Index (SSIM) of the reconstructed new regions as compared to other methods.

In a longitudinal study, the reconstruction of localized new information in the data should not be affected by priors used, given that the new measurements are taken with substantially fewer views (approximately 2.5%–10% data). In this work, we have improved the state of the art with a weighted prior-based reconstruction that detects these regions of change and assigns low prior weights wherever necessary. The probability of presence of a ‘new region’ is enhanced considerably by a novel combination of different reconstruction techniques. Our method is general as shown in Schematic 1, but has been demonstrated on new, real, biological 3D datasets for longitudinal studies. The method is also largely robust to the number of templates used. We urge the reader to see the videos of reconstructed volumes in the

supplementary material [18]. In a medical setting, we note that the detection of the new regions will enable irradiation of the patient only in the region of interest by keeping specific detector bins active, thereby reducing the radiation exposure.