PatternAttribution is a recent method, introduced in the vision domain, that explains classifications of deep neural networks. We demonstrate that it also generates meaningful interpretations in the language domain. 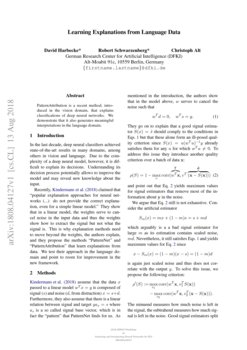 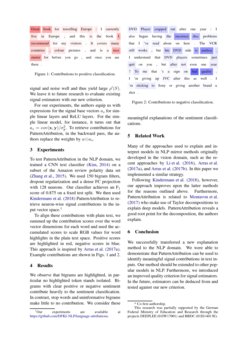 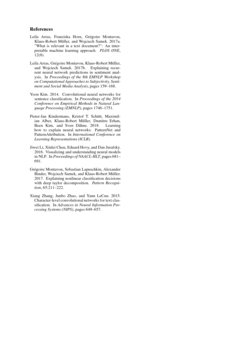 Explaining the Road Not Taken

It is widely recognized that the predictions of deep neural networks are...
Cosmas Heiß, et al. ∙

In the last decade, deep neural classifiers achieved state-of-the-art results in many domains, among others in vision and language. Due to the complexity of a deep neural model, however, it is difficult to explain its decisions. Understanding its decision process potentially allows to improve the model and may reveal new knowledge about the input.

Recently, Kindermans et al. (2018) claimed that “popular explanation approaches for neural networks (…) do not provide the correct explanation, even for a simple linear model.” They show that in a linear model, the weights serve to cancel noise in the input data and thus the weights show how to extract the signal but not what the signal is. This is why explanation methods need to move beyond the weights, the authors explain, and they propose the methods “PatternNet” and “PatternAttribution” that learn explanations from data. We test their approach in the language domain and point to room for improvement in the new framework.

Kindermans et al. (2018) assume that the data x passed to a linear model wTx=y is composed of signal (s) and noise (d, from distraction) x=s+d. Furthermore, they also assume that there is a linear relation between signal and target yas=s where as

is a so called signal base vector, which is in fact the “pattern” that PatternNet finds for us. As mentioned in the introduction, the authors show that in the model above,

w serves to cancel the noise such that

They go on to explain that a good signal estimator

S(x)=^s should comply to the conditions in Eqs. 1 but that these alone form an ill-posed quality criterion since S(x)=u(wTu)−1y already satisfies them for any u for which wTu≠0. To address this issue they introduce another quality criterion over a batch of data x:

and point out that Eq. 2 yields maximum values for signal estimators that remove most of the information about y in the noise.

We argue that Eq. 2 still is not exhaustive. Consider the artificial estimator

which arguably is a a bad signal estimator for large m as its estimation contains scaled noise, md. Nevertheless, it still satisfies Eqs. 1 and yields maximum values for Eq. 2 since

is again just scaled noise and thus does not correlate with the output y. To solve this issue, we propose the following criterion:

For our experiments, the authors equip us with expressions for the signal base vectors as

as=cov(x,y)/σ2y. To retrieve contributions for PatternAttribution, in the backward pass, the authors replace the weights by w\astrosunas.

To test PatternAttribution in the NLP domain, we trained a CNN text classifier Kim (2014) on a subset of the Amazon review polarity data set Zhang et al. (2015)

. We used 150 bigram filters, dropout regularization and a dense FC projection with 128 neurons. Our classifier achieves an F

1 score of 0.875 on a fixed test split. We then used Kindermans et al. (2018) PatternAttribution to retrieve neuron-wise signal contributions in the input vector space.111Our experiments are available at https://github.com/DFKI-NLP/language-attributions.

To align these contributions with plain text, we summed up the contribution scores over the word vector dimensions for each word and used the accumulated scores to scale RGB values for word highlights in the plain text space. Positive scores are highlighted in red, negative scores in blue. This approach is inspired by Arras et al. (2017a). Example contributions are shown in Figs. 1 and 2.

We successfully transferred a new explanation method to the NLP domain. We were able to demonstrate that PatternAttribution can be used to identify meaningful signal contributions in text inputs. Our method should be extended to other popular models in NLP. Furthermore, we introduced an improved quality criterion for signal estimators. In the future, estimators can be deduced from and tested against our new criterion. ††footnotetext: * Co-first authorship.††footnotetext: This research was partially supported by the German Federal Ministry of Education and Research through the projects DEEPLEE (01IW17001) and BBDC (01IS14013E).