Learning by Self-Explanation, with Application to Neural Architecture Search

Learning by self-explanation, where students explain a learned topic to themselves for deepening their understanding of this topic, is a broadly used methodology in human learning and shows great effectiveness in improving learning outcome. We are interested in investigating whether this powerful learning technique can be borrowed from humans to improve the learning abilities of machines. We propose a novel learning approach called learning by self-explanation (LeaSE). In our approach, an explainer model improves its learning ability by trying to clearly explain to an audience model regarding how a prediction outcome is made. We propose a multi-level optimization framework to formulate LeaSE which involves four stages of learning: explainer learns; explainer explains; audience learns; explainer and audience validate themselves. We develop an efficient algorithm to solve the LeaSE problem. We apply our approach to neural architecture search on CIFAR-100, CIFAR-10, and ImageNet. The results demonstrate the effectiveness of our method. 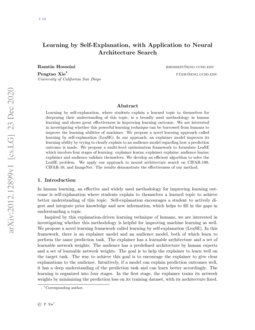 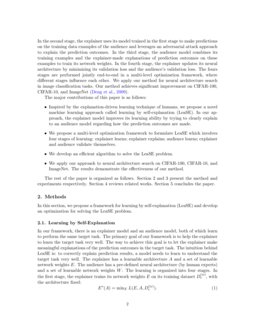 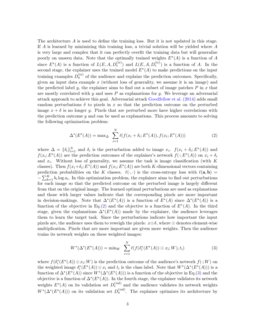 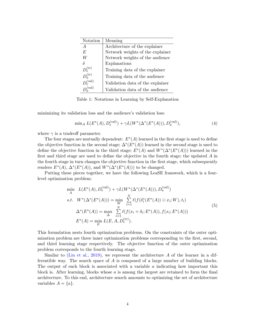 In human learning, an effective and widely used methodology for improving learning outcome is self-explanation where students explain to themselves a learned topic to achieve better understanding of this topic. Self-explanation encourages a student to actively digest and integrate prior knowledge and new information, which helps to fill in the gaps in understanding a topic.

Inspired by this explanation-driven learning technique of humans, we are interested in investigating whether this methodology is helpful for improving machine learning as well. We propose a novel learning framework called learning by self-explanation (LeaSE). In this framework, there is an explainer model and an audience model, both of which learn to perform the same prediction task. The explainer has a learnable architecture and a set of learnable network weights. The audience has a predefined architecture by human experts and a set of learnable network weights. The goal is to help the explainer to learn well on the target task. The way to achieve this goal is to encourage the explainer to give clear explanations to the audience. Intuitively, if a model can explain prediction outcomes well, it has a deep understanding of the prediction task and can learn better accordingly. The learning is organized into four stages. In the first stage, the explainer trains its network weights by minimizing the prediction loss on its training dataset, with its architecture fixed. In the second stage, the explainer uses its model trained in the first stage to make predictions on the training data examples of the audience and leverages an adversarial attack approach to explain the prediction outcomes. In the third stage, the audience model combines its training examples and the explainer-made explanations of prediction outcomes on these examples to train its network weights. In the fourth stage, the explainer updates its neural architecture by minimizing its validation loss and the audience’s validation loss. The fours stages are performed jointly end-to-end in a multi-level optimization framework, where different stages influence each other. We apply our method for neural architecture search in image classification tasks. Our method achieves significant improvement on CIFAR-100, CIFAR-10, and ImageNet

The major contributions of this paper is as follows:

The rest of the paper is organized as follows. Section 2 and 3 present the method and experiments respectively. Section 4 reviews related works. Section 5 concludes the paper.

In this section, we propose a framework for learning by self-explanation (LeaSE) and develop an optimization for solving the LeaSE problem.

The architecture A is used to define the training loss. But it is not updated in this stage. If A is learned by minimizing this training loss, a trivial solution will be yielded where A is very large and complex that it can perfectly overfit the training data but will generalize poorly on unseen data. Note that the optimally trained weights E∗(A) is a function of A since E∗(A) is a function of L(E,A,D(tr)e) and L(E,A,D(tr)e) is a function of A. In the second stage, the explainer uses the trained model E∗(A) to make predictions on the input training examples D(tr)a of the audience and explains the prediction outcomes. Specifically, given an input data example x (without loss of generality, we assume it is an image) and the predicted label y, the explainer aims to find out a subset of image patches P in x that are mostly correlated with y and uses P as explanations for y. We leverage an adversarial attack approach to achieve this goal. Adversarial attack goodfellow2014explaining adds small random perturbations δ to pixels in x so that the prediction outcome on the perturbed image x+δ is no longer y. Pixels that are perturbed more have higher correlations with the prediction outcome y and can be used as explanations. This process amounts to solving the following optimization problem:

K classes. ℓ(⋅,⋅) is the cross-entropy loss with ℓ(a,b)=−∑Kk=1bilogai. In this optimization problem, the explainer aims to find out perturbations for each image so that the predicted outcome on the perturbed image is largely different from that on the original image. The learned optimal perturbations are used as explanations and those with larger values indicate that the corresponding pixels are more important in decision-makings. Note that Δ∗(E∗(A)) is a function of E∗(A) since Δ∗(E∗(A)) is a function of the objective in Eq.(2) and the objective is a function of E∗(A). In the third stage, given the explanations Δ∗(E∗(A)) made by the explainer, the audience leverages them to learn the target task. Since the perturbations indicate how important the input pixels are, the audience uses them to reweigh the pixels: x⊙δ, where ⊙ denotes element-wise multiplication. Pixels that are more important are given more weights. Then the audience trains its network weights on these weighted images:

where γ is a tradeoff parameter.

Putting these pieces together, we have the following LeaSE framwork, which is a four-level optimization problem:

Similar to (liu2018darts), we represent the architecture A of the learner in a differentible way. The search space of A is composed of a large number of building blocks. The output of each block is associated with a variable a indicating how important this block is. After learning, blocks whose a is among the largest are retained to form the final architecture. To this end, architecture search amounts to optimizing the set of architecture variables A={a}.

First of all, we approximate E∗(A) using

where ξe is a learning rate. Plugging E′ into ∑Ni=1ℓ(f(xi+δi;E∗(A)),f(xi;E∗(A))), we obtain an approximated objective OΔ=∑Ni=1ℓ(f(xi+δi;E′),f(xi;E′)). Then we approximate Δ∗(E∗(A)) using one-step gradient descent update of Δ with respect to OΔ:

Plugging Δ′ into ∑Ni=1ℓ(f(δ∗i(E∗(A))⊙xi;W),ti), we obtain an approximated objective OW=∑Ni=1ℓ(f(δ′i⊙xi;W),ti). Then we approximate W∗(Δ∗(E∗(A))) using one-step gradient descent update of W with respect to OW:

The first term in the third line involves expensive matrix-vector product, whose computational complexity can be reduced by a finite difference approximation:

according to the chain rule, where

The algorithm for solving LeaSE is summarized in Algorithm 1.

The search space of A in LeaSE is the same as that in DARTS (liu2018darts). The candidate operations include: 3×3 and 5×5 separable convolutions, 3×3 and 5×5 dilated separable convolutions, 3×3max pooling, 3×3 average pooling, identity, and zero. In LeaSE, the network of the explainer is a stack of multiple cells, each consisting of 7 nodes. For the architecture of the audience, we used ResNet-18 (resnet). γ is set to 1.

, we take the architecture searched on CIFAR-10 and evaluate it on ImageNet. We stack 14 cells (searched on CIFAR-10) to form a large network and set the initial channel number as 48. The network is trained for 250 epochs with a batch size of 1024 on 8 Tesla v100s. Each experiment on LeaSE is repeated for ten times with the random seed to be from 1 to 10. We report the mean and standard deviation of results obtained from the 10 runs.

Table 2 shows the classification error (%), number of weight parameters (millions), and search cost (GPU days) of different NAS methods on CIFAR-100. From this table, we can see that when our method LeaSE is applied to DARTS-2nd, the classification error is significantly reduced from 20.58% to 19.26%. This demonstrates that learning by self-explanation is an effective mechanism for improving the quality of searched architectures. In our method, the explainer is encouraged to make sensible explanations for the prediction outcomes. To make meaningful explanations, it needs to learn better to understand the prediction task very well.

Table 3 shows the classification error (%), number of weight parameters (millions), and search cost (GPU days) of different NAS methods on CIFAR-10. As can be seen, applying our proposed LeaSE to DARTS-2nd, the error is reduced from 2.76% to 2.62%. This further demonstrates the efficacy of our method in searching better-performing architectures, thanks to its mechanism of improving the explainer’s learning ability by encouraging the explainer to make sensible explanations.

Table 4 shows the results on ImageNet, including top-1 and top-5 classification errors on the test set, number of weight parameters (millions), and search costs (GPU days). Following (liu2018darts), we take the architecture searched by LeaSE-R18-DARTS-2nd on CIFAR-10 and evaluate it on ImageNet. As can be seen, applying our LeaSE method to DARTS-2nd, the top-1 error considerably reduces from 26.7% to 24.7% . This further demonstrates the effectiveness of our method.

Neural architecture search (NAS) has achieved remarkable progress recently, which aims at searching for the optimal architecture of neural networks to achieve the best predictive performance. In general, there are three paradigms of methods in NAS: reinforcement learning (RL) approaches

(zoph2016neural; pham2018efficient; zoph2018learning), evolutionary learning approaches (liu2017hierarchical; real2019regularized), and differentiable approaches (cai2018proxylessnas; liu2018darts; xie2018snas). In RL-based approaches, a policy is learned to iteratively generate new architectures by maximizing a reward which is the accuracy on the validation set. Evolutionary learning approaches represent the architectures as individuals in a population. Individuals with high fitness scores (validation accuracy) have the privilege to generate offspring, which replaces individuals with low fitness scores. Differentiable approaches adopt a network pruning strategy. On top of an over-parameterized network, the weights of connections between nodes are learned using gradient descent. Then weights close to zero are later pruned. There have been many efforts devoted to improving differentiable NAS methods. In P-DARTS (chen2019progressive), the depth of searched architectures is allowed to grow progressively during the training process. Search space approximation and regularization approaches are developed to reduce computational overheads and improve search stability. PC-DARTS (abs-1907-05737) reduces the redundancy in exploring the search space by sampling a small portion of a super network. Operation search is performed in a subset of channels with the held out part bypassed in a shortcut. Our proposed LeaSE framework can be applied to any differentiable NAS methods.