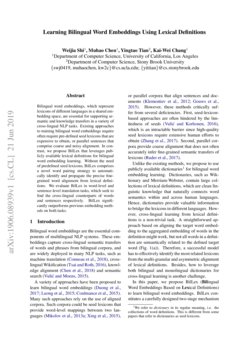 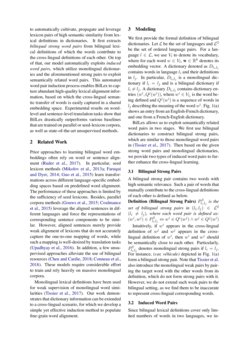 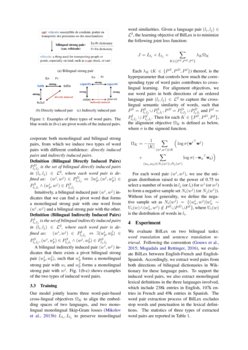 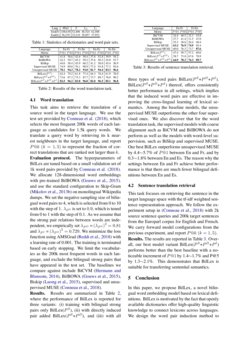 Unlike the existing methods, we propose to use publicly available dictionaries111We refer to dictionary in its regular meaning, i.e. the collections of word definitions. This is different from some papers that refer to dictionaries as seed lexicons. for bilingual word embedding learning. Dictionaries, such as Wiktionary and Merriam-Webster, contain large collections of lexical definitions, which are clean linguistic knowledge that naturally connects word semantics within and across human languages. Hence, dictionaries provide valuable information to bridge the lexicons in different languages. However, cross-lingual learning from lexical definitions is a non-trivial task. A straightforward approach based on aligning the target word embedding to the aggregated embedding of words in the definition might work, but not all words in a definition are semantically related to the defined target word (Fig. 1(a)). Therefore, a successful model has to effectively identify the most related lexicons from the multi-granular and asymmetric alignment of lexical definitions. Besides, how to leverage both bilingual and monolingual dictionaries for cross-lingual learning is another challenge.

In this paper, we propose BilLex (Bilingual Word Embeddings Based on Lexical Definitions) to learn bilingual word embeddings. BilLex constitutes a carefully designed two-stage mechanism to automatically cultivate, propagate and leverage lexicon pairs of high semantic similarity from lexical definitions in dictionaries. It first extracts bilingual strong word pairs from bilingual lexical definitions of which the words contribute to the cross-lingual definitions of each other. On top of that, our model automatically exploits induced word pairs, which utilize monolingual dictionaries and the aforementioned strong pairs to exploit semantically related word pairs. This automated word pair induction process enables BilLex to capture abundant high-quality lexical alignment information, based on which the cross-lingual semantic transfer of words is easily captured in a shared embedding space. Experimental results on word-level and sentence-level translation tasks show that BilLex drastically outperforms various baselines that are trained on parallel or seed-lexicon corpora, as well as state-of-the-art unsupervised methods.

Prior approaches to learning bilingual word embeddings often rely on word or sentence alignment Ruder et al. (2017). In particular, seed lexicon methods Mikolov et al. (2013a); Faruqui and Dyer (2014); Guo et al. (2015) learn transformations across different language-specific embedding spaces based on predefined word alignment. The performance of these approaches is limited by the sufficiency of seed lexicons. Besides, parallel corpora methods Gouws et al. (2015); Coulmance et al. (2015) leverage the aligned sentences in different languages and force the representations of corresponding sentence components to be similar. However, aligned sentences merely provide weak alignment of lexicons that do not accurately capture the one-to-one mapping of words, while such a mapping is well-desired by translation tasks Upadhyay et al. (2016). In addition, a few unsupervised approaches alleviate the use of bilingual resources Chen and Cardie (2018); Conneau et al. (2018). These models require considerable effort to train and rely heavily on massive monolingual corpora.

Monolingual lexical definitions have been used for weak supervision of monolingual word similarities Tissier et al. (2017). Our work demonstrates that dictionary information can be extended to a cross-lingual scenario, for which we develop a simple yet effective induction method to populate fine-grain word alignment.

We first provide the formal definition of bilingual dictionaries. Let L be the set of languages and L2 be the set of ordered language pairs. For a language l∈L, we use Vl to denote its vocabulary, where for each word w∈Vl, w∈Rk

denotes its embedding vector. A dictionary denoted as

A bilingual strong pair contains two words with high semantic relevance. Such a pair of words that mutually contribute to the cross-lingual definitions of each other is defined as below.

Definition (Bilingual Strong Pairs) PSli,lj is the set of bilingual strong pairs in (li,lj)∈L2 (li≠lj), where each word pair is defined as: (wi,wj)∈PSli,lj⇔wi∈Qi(wj)∧wj∈Qj(wi)

Intuitively, if wi appears in the cross-lingual definition of wj and wj appears in the cross-lingual definition of wi, then wi and wj should be semantically close to each other. Particularly, PSli,lj denotes monolingual strong pairs if li=lj. For instance, (car, véhicule) depicted in Fig. 1(a) form a bilingual strong pair. Note that Tissier et al. also introduce the monolingual weak pairs by pairing the target word with the other words from its definition, which do not form strong pairs with it. However, we do not extend such weak pairs to the bilingual setting, as we find them to be inaccurate to represent cross-lingual corresponding words.

Definition (Bilingual Directly Induced Pairs) PDli,lj is the set of bilingual directly induced pairs in (li,lj)∈L2, where each word pair is defined as: (wi,wj)∈PDli,lj⇔∃wip,(wi,wip)∈PSli,li∧(wip,wj)∈PSli,lj

Definition (Bilingual Indirectly Induced Pairs) PIli,lj is the set of bilingual indirectly induced pairs in (li,lj)∈L2, where each word pair is defined as: (wi,wj)∈PIli,lj⇔∃(wip,wjp)∈PSli,lj,(wi,wip)∈PSli,li∧(wj,wjp)∈PSlj,lj

, the learning objective of BilLex is to minimize the following joint loss function:

) thereof, is the hyperparameter that controls how much the corresponding type of word pairs contributes to cross-lingual learning. For alignment objectives, we use word pairs in both directions of an ordered language pair

(li,lj)∈L2 to capture the cross-lingual semantic similarity of words, such that PS=PSli,lj∪PSlj,li,PD=PDli,lj∪PDlj,li and PI=PIli,lj∪PIlj,li. Then for each K∈{PS,PD,PI}, the alignment objective ΩK is defined as below, where σ

For each word pair (wi,wj), we use the unigram distribution raised to the power of 0.75 to select a number of words in lj (or li) for wi (or wj) to form a negative sample set Ni(wj) (or Nj(wi)). Without loss of generality, we define the negative sample set as Ni(wj)={(win,wj)|win∼Ui(w)∧(win,wj)∉PS∪PD∪PI}, where Ui(w) is the distribution of words in li.

We evaluate BilLex on two bilingual tasks: word translation and sentence translation retrieval. Following the convention Gouws et al. (2015); Mogadala and Rettinger (2016), we evaluate BilLex between English-French and English-Spanish. Accordingly, we extract word pairs from both directions of bilingual dictionaries in Wiktionary for these language pairs. To support the induced word pairs, we also extract monolingual lexical definitions in the three languages involved, which include 238k entries in English, 107k entries in French and 49k entries in Spanish. The word pair extraction process of BilLex excludes stop words and punctuation in the lexical definitions. The statistics of three types of extracted word pairs are reported in Table 1.

This task aims to retrieve the translation of a source word in the target language. We use the test set provided by Conneau et al. Conneau et al. (2018), which selects the most frequent 200k words of each language as candidates for 1.5k query words. We translate a query word by retrieving its k nearest neighbours in the target language, and report P@k (k=1,5) to represent the fraction of correct translations that are ranked not larger than k.

Evaluation protocol. The hyperparameters of BilLex are tuned based on a small validation set of 1k word pairs provided by Conneau et al. Conneau et al. (2018). We allocate 128-dimensional word embeddings with pre-trained BilBOWA Gouws et al. (2015). and use the standard configuration to Skip-Gram Mikolov et al. (2013b) on monolingual Wikipedia dumps. We set the negative sampling size of bilingual word pairs to 4, which is selected from 0 to 10 with the step of 1. λPS is set to 0.9, which is tuned from 0 to 1 with the step of 0.1. As we assume that the strong pair relations between words are independent, we empirically set λPD = (λPS)2=0.81 and λPI = (λPS)3=0.729. We minimize the loss function using AMSGrad Reddi et al. (2018) with a learning rate of 0.001. The training is terminated based on early stopping. We limit the vocabularies as the 200k most frequent words in each language, and exclude the bilingual strong pairs that have appeared in the test set. The baselines we compare against include BiCVM Hermann and Blunsom (2014), BilBOWA Gouws et al. (2015), Biskip Luong et al. (2015), supervised and unsupervised MUSE Conneau et al. (2018).

Results. Results are summarized in Table 2, where the performance of BilLex is reported for three variants: (i) training with bilingual strong pairs only BilLex(PS), (ii) with directly induced pair added BilLex(PS+PD), and (iii) with all three types of word pairs BilLex(PS+PD+PI). BilLex(PS+PD+PI) thereof, offers consistently better performance in all settings, which implies that the induced word pairs are effective in improving the cross-lingual learning of lexical semantics. Among the baseline models, the unsupervised MUSE outperforms the other four supervised ones. We also discover that for the word translation task, the supervised models with coarse alignment such as BiCVM and BilBOWA do not perform as well as the models with word-level supervision, such as BiSkip and supervised MUSE. Our best BilLex outperforms unsupervised MUSE by 4.4∼5.7% of P@1 between En and Fr, and by 0.3∼1.8% between En and Es. The reason why the settings between En and Fr achieve better performance is that there are much fewer bilingual definitions between En and Es.

This task focuses on retrieving the sentence in the target language space with the tf-idf weighted sentence representation approach. We follow the experiment setup in Conneau et al. (2018) with 2k source sentence queries and 200k target sentences from the Europarl corpus for English and French. We carry forward model configurations from the previous experiment, and report P@k (k=1,5).

Results. The results are reported in Table 3. Overall, our best model variant BilLex(PS+PD+PI) performs better than the best baseline with a noticeable increment of P@1 by 1.4∼1.7% and P@5 by 1.3∼2.1%. This demonstrates that BilLex is suitable for transferring sentential semantics.

In this paper, we propose BilLex, a novel bilingual word embedding model based on lexical definitions. BilLex is motivated by the fact that openly available dictionaries offer high-quality linguistic knowledge to connect lexicons across languages. We design the word pair induction method to capture semantically related lexicons in dictionaries, which serve as alignment information in joint training. BilLex outperforms state-of-the-art methods on word and sentence translation tasks.