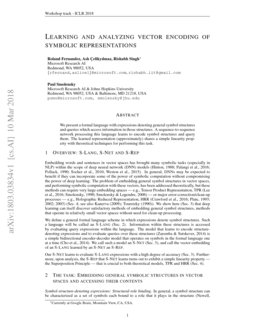 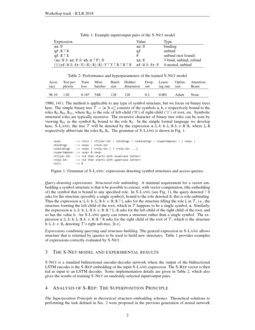 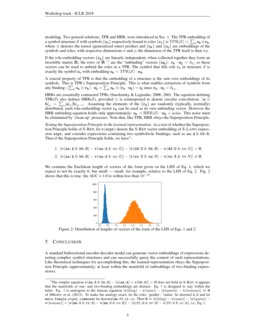 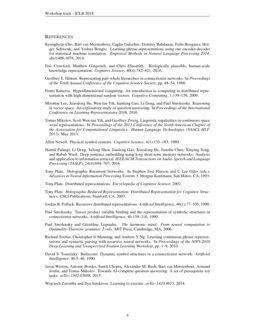 A circular de Bruijn sequence of order n in an alphabet of k symbols is ...
Verónica Becher, et al. ∙

How can the semantic interpretation of a formal symbol system be made in...
Stevan Harnad, et al. ∙

Extraction of symbolic information from signals is an active field of re...
Axel Chemla--Romeu-Santos, et al. ∙

. In general, DNNs may be expected to benefit if they can incorporate some of the power of symbolic computation without compromising the power of deep learning. The problem of embedding general symbol structures in vector spaces, and performing symbolic computation with these vectors, has been addressed theoretically, but these methods can require very large embedding spaces — e.g., Tensor Product Representation, TPR

We define a general formal language scheme in which expressions denote symbol structures. Such a language will be called an S-Lang (Sec. 2). Information within these structures is accessed by evaluating query expressions within the language. The model that learns to encode structure-denoting expressions and to evaluate queries over these structures (Zaremba & Sutskever, 2014) is a simple bidirectional encoder-decoder model that operates on symbols in the formal language one at a time (Cho et al., 2014). We call such a model an S-Net (Sec. 3), and call the vector embedding of an S-Lang learned by an S-Net an S-Rep.

Our S-Net learns to evaluate S-Lang expressions with a high degree of accuracy (Sec. 3). Furthermore, upon analysis, the S-Rep that S-Net learns turns out to exhibit a simple linearity property — the Superposition Principle — that is crucial to both theoretical models, TPR and HRR (Sec. 4).

2 The task: Embedding general symbolic structures in vector spaces and accessing their contents

Symbol-structure-denoting expressions: Structural-role binding. In general, a symbol structure can be characterized as a set of symbols each bound to a role that it plays in the structure (Newell, 1980, 141). The method is applicable to any type of symbol structure, but we focus on binary trees here. The simple binary tree T=[a [b c]] consists of the symbols a,b,c respectively bound to the roles R0,R01,R11, where R01 is the role of left-child (‘0’) of right-child (‘1’) of root, etc. Symbolic structural roles are typically recursive. The recursive character of binary tree roles can be seen by viewing R01 as the symbol R0 bound to the role R1. In the simple formal language we develop here, S-Lang, the tree T will be denoted by the expression a:L & b:L:R & c:R:R, where L,R respectively abbreviate the roles R0,R1. The grammar of S-Lang is shown in Fig. 1.

Expressions combining querying and structure-building. The general expression in S-Lang allows structure that is returned by queries to be used to build new structures. Table 1 provides examples of expressions correctly evaluated by S-Net.

3 The S-Net model and experimental results

S-Net is a standard bidirectional encoder-decoder network where the output of the bidirectional LSTM encoder is the S-Rep embedding of the input S-Lang expression. The S-Rep vector is then fed as input to an LSTM decoder. Some implementation details are given in Table 2, which also gives the results of training S-Net on randomly-selected input/output pairs.

4 Analysis of S-Rep: The Superposition Principle

The Superposition Principle in theoretical structure-embedding schemes. Theoretical solutions to performing the task defined in Sec. 2 were proposed in the previous generation of neural network modeling. Two general solutions, TPR and HRR, were introduced in Sec. 1. The TPR embedding of a symbol structure S with symbols {sk} respectively bound to roles {rk} is TPR(S)≡∑ksk⊗rk, where ⊗ denotes the tensor (generalized outer) product and {sk} and {rk} are embeddings of the symbols and roles, with respective dimensions σ and ρ; the dimension of the TPR itself is then σρ.

If the role-embedding vectors {rk}

are linearly independent, when collected together they form an invertible matrix

R; the rows of R−1 are the “unbinding” vectors {uk}: rk⋅uj=δkj so these vectors can be used to unbind the roles in a TPR. The symbol that fills role rk in structure S is exactly the symbol sk with embedding sk=TPR(S)⋅uk.

A crucial property of TPR is that the embedding of a structure is the sum over embeddings of its symbols. This is TPR’s Superposition Principle. This is what enables extraction of symbols from any binding: (∑ksk⊗rk)⋅uj=∑ksk⊗(rk⋅uj)=sj since rk⋅uj=δkj.

rk can be used as its own unbinding vector. However the HRR unbinding equation holds only approximately: sk=HRR(S)⋅uk+noise. This noise must be eliminated by ‘clean-up’ processes. Note that, like TPR, HRR obeys the Superposition Principle.

Testing the Superposition Principle in the learned representation. As a test of whether the Superposition Principle holds of S-Rep, let v(expr) denote the S-Rep vector embedding of S-Lang expression expr, and consider expressions containing two symbol/role bindings, such as aa:A & bb:B. Then if the Superposition Principle holds, we have111The simpler equation v(aa:A & bb:B)−[v(aa:A)+v(bb:B)]=0 does not hold in S-Rep; it appears that the manifolds of one- and two-binding embeddings are distinct. Eq. 1 is designed to stay within the latter. Eq. 1 is analogous to the famous equation [v(king)−v(man)]−[v(queen)−v(woman)]≈0 of Mikolov et al. (2013). To make the analogy exact, let the roles ‘gender’, ‘status’ be denoted G,S and let male,female,royal,commoner be denoted mm,ff,rr,cc. Then 0≈[v(king)−v(man)]−[v(queen)−v(woman)] =[v(mm:G & rr:S)−v(mm:G & cc:S)]−[v(ff:G & rr:S)−v(ff:G & cc:S), i.e., Eq. 1. :

A standard bidirectional encoder-decoder model can generate vector embeddings of expressions denoting complex symbol structures and can successfully query the content of such representations. Like theoretical techniques for accomplishing this, the learned representation obeys the Superposition Principle (approximately; at least within the manifold of embeddings of two-binding expressions).