We describe a method for training accurate Transformer machine-translation models to run inference using 8-bit integer (INT8) hardware matrix multipliers, as opposed to the more costly single-precision floating-point (FP32) hardware. Unlike previous work, which converted only 85 Transformer matrix multiplications to INT8, leaving 48 out of 133 of them in FP32 because of unacceptable accuracy loss, we convert them all to INT8 without compromising accuracy. Tested on the newstest2014 English-to-German translation task, our INT8 Transformer Base and Transformer Big models yield BLEU scores that are 99.3 converts all matrix-multiplication tensors from an existing FP32 model into INT8 tensors by automatically making range-precision trade-offs during training. To demonstrate the robustness of this approach, we also include results from INT6 Transformer models. 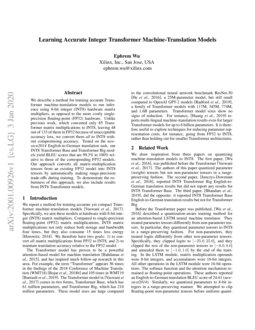 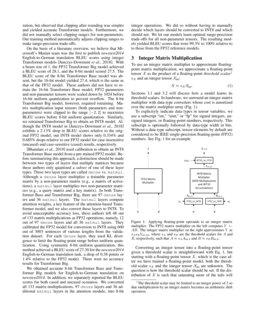 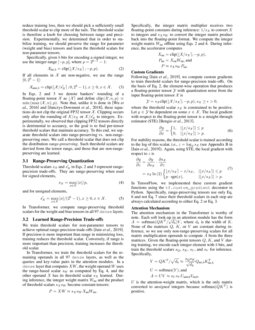 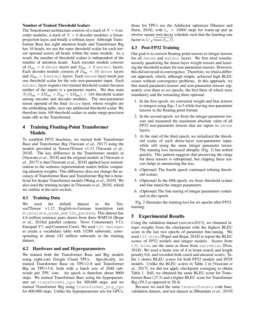 The Transformer model has proven to be a powerful attention-based model for machine translation [Bahdanau et al.2015], and has inspired much follow-up research in this area. For example, the term “Transformer” appears 56 times in the findings of the 2018 Conference of Machine Translation (WMT18) [Bojar et al.2018b] and 105 times in WMT19 [Barrault et al.2019]. The Transformer model in [Vaswani et al.2017]

Before the Transformer paper was published, [Wu et al.2016]

[−25.0,25.0], and they clipped the rest of the non-parameter tensors to [−8.0,8.0] and annealed them to [−1.0,1.0] by the end of the training. In the LSTM module, matrix multiplication operands were 8-bit integers, and accumulators were 16-bit integers. All other operations in the LSTM module were 16-bit operations. The softmax function and the attention mechanism remained as floating-point operations. These authors reported an English-to-German translation BLEU score of 24.61 (newstest2014). Similarly, we quantized parameters to 8-bit integers in a range-preserving manner. We attempted to clip floating-point non-parameter tensors before uniform quantization, but observed that clipping after rounding was simpler and yielded accurate Transformer models. Furthermore, we did not manually select clipping ranges for non-parameters. Our training method automatically adjusts clipping ranges to make range-precision trade-offs.

On the basis of a literature overview, we believe that Microsoft’s Marian team was the first to publish newstest2014 English-to-German translation BLEU scores using integer Transformer models [Junczys-Dowmunt et al.2018]. With a beam size of 1, the FP32 Transformer Big model achieved a BLEU score of 28.1, and the 8-bit model scored 27.5. The BLEU score of the 8-bit Transformer Base model was absent, but the 16-bit model yielded 27.4, which is the same as that of the FP32 model. These authors did not have to retrain the 16-bit Transformer Base model; FP32 parameters and non-parameter tensors were scaled down by 1024 before 16-bit uniform quantization to prevent overflow. The 8-bit Transformer Big model, however, required retraining. Matrix multiplication input tensors (both parameters and non-parameters) were clipped to the range [−2,2] to maximize BLEU scores before 8-bit uniform quantization. Similarly, we retrained Transformer Big to obtain an INT8 model. Although the INT8 model in [Junczys-Dowmunt et al.2018] exhibits a 2.13% drop in BLEU scores relative to the original FP32 model, our INT8 model shows only 0.334% and 0.685% drops relative to our FP32 model for case-insensitive (uncased) and case-sensitive (cased) results, respectively.

[Bhandare et al.2019] used calibration to obtain an INT8 Transformer Base model from a pre-trained FP32 model. Before summarizing this approach, a distinction should be made between two types of layers that multiply matrices because these authors only quantized a subset of one of these layer types. These two layer types are called dense vs. matmul. Although a dense layer multiplies a trainable parameter matrix by a non-parameter matrix (e.g., a matrix of activations), a matmul layer multiplies two non-parameter matrices (e.g., a query matrix and a key matrix). In both Transformer Base and Transformer Big, there are 97 dense layers and 36 matmul layers. The matmul layers compute attention weights, a key feature of the attention-based Transformer model, and we also convert these layers to INT8. To avoid unacceptable accuracy loss, these authors left 48 out of 133 matrix multiplications as FP32 operations, namely, 12 out of 97 dense layers and all 36 matmul layers. They calibrated the FP32 model for conversion to INT8 using 600 out of 3003 sentences of various lengths from the validation dataset. For each dense layer, they used KL divergence to limit the floating-point range before uniform quantization. Using symmetric 8-bit uniform quantization, this method achieved a BLEU score of 27.30 for the newstest2014 English-to-German translation task, a drop of 0.38 points or 1.4% relative to the FP32 model. There were no accuracy results for Transformer Big.

We obtained accurate 8-bit Transformer Base and Transformer Big models for English-to-German translation on newstest2014. In addition, we separately reported the BLEU scores for both cased and uncased scenarios. We converted all 133 matrix-multiplications, 97 dense layers and 36 additional matmul layers in the attention module, into 8-bit integer operations. We did so without having to manually decide which layers should be converted to INT8 and which should not. We let our models learn optimal range-precision trade-offs for all non-parameter tensors. The resulting models yielded BLEU scores that were 99.3% to 100% relative to to those from the FP32 reference models.

Sections 3.1 and 3.2 will discuss how a model learns its threshold scalars. In hardware, we surround an integer matrix multiplier with data-type converters whose cost is amortized over the matrix multiplier array (Fig. 1).

To explicityly indicate data types in tensor variables, we use a subscript “int,” “uint,” or “fp” for signed integers, unsigned integers, or floating-point numbers, respectively. This subscript is optionally followed by data-type width in bits. Without a data-type subscript, tensor elements by default are considered to be IEEE single-precision floating-point (FP32) numbers. See Fig. 1 for an example.

Specifically, given b bits for encoding a signed integer, we use the integer range [−p,p], where p=2b−1−1:

Threshold scalars sX and s′X in Eqs. 2 and 3 represent range-precision trade-offs. They are range-preserving when used for signed elements,

and for unsigned elements,

In Transformer, we compute range-preserving threshold scalars for the weight and bias tensors in all 97 dense layers.

In Transformer, we train the threshold scalars for the remaining operands in all 97 dense layers, as well as the queries and key-value pairs in the attention modules. In a dense layer that computes XW, the weight operand W uses the range-based scalar sW as computed by Eq. 4, and the other operand X has its threshold scalar sX learned. During inference, the integer weight matrix Wint and the product of threshold scalars sXsW become constant tensors:

Following [Jain et al.2019], we compute custom gradients to train threshold scalars for range-precision trade-offs. On the basis of Eq. 2, the element-wise operation that produces a floating-pointer tensor Y with quantization noise from the input floating-point tensor X is

where the threshold scalar sX is constrained to be positive. Let y∈Y be dependent on some x∈X

. The local gradient with respect to the floating-point tensor is a straight-through estimator (STE)

For stability reasons, the threshold scalar is trained according to the log of this scalar, i.e., z=log2sX (see Appendix B in [Jain et al.2019]). Again, using STE, the local gradient with respect to z is

In TensorFlow, we implemented these custom gradient functions using the

tf.custom_gradient decorator in Python. Specifically, range-preserving tensors use only Eq. 6 and not Eq. 7 since their threshold scalars in each step are always calculated according to either Eq. 2 or Eq. 3.

The attention mechanism in the Transformer is worthy of note. Each soft look-up in an attention module has the form A=softmax(QKT/√dk)V, where dk is the width of K. None of the matrices Q, K, or V are constant during inference, so we use only non-range-preserving scalars for all matrix multiplication operands to compute A from the three matrices. Given the floating-point tensors Q, K, and V during training, we encode each integer element with b bits, and train the threshold scalars sQ, sK, sU, and sV for inference. Specifically,

U is the attention-weight matrix, which is the only matrix converted to unsigned integers because softmax(QKT) is positive.

decoder modules, a linear-projection layer, and finally a softmax layer. Although Transformer Base has eight attention heads and Transformer Big has 16 heads, we use the same threshold scalar for each tensor operand across all heads within the same module. As a result, the number of threshold scalars is independent of the number of attention heads. Each encoder module consists of

4.2 Hardware and and Hyperparameters

transformer_tpu for 300,000 steps, and we trained Transformer Big using transformer_big_tpu for 600,000 steps. Unlike the hyperparameter sets for GPUs, those for TPUs use the Adafactor optimizer [Shazeer and Stern2018], with tw=10000 steps for warm-up and an inverse square root decay schedule such that the learning rate factor is 1/√max(tw,t).

Our goal is to convert floating-point tensors to integer tensors for all dense and matmul layers. We first tried simultaneously quantizing the dense-layer weight tensors and learning the threshold scalars for non-parameter tensors. However, this did not result in convergence. Therefore, we tried a different approach, which, although simple, achieved high BLEU scores without convergence problems. In this approach, we fine-tuned parameter tensors and non-parameter tensors separately over three to six epochs, the first three of which were mandatory and the remaining three optional.

Fig. 2 illustrates the training loss for six epochs after FP32-training.

Using the validation dataset (newstest2013), we obtained integer weights from the checkpoint with the highest BLEU score in the last two epochs of parameter fine-tuning. We used t2t-bleu [Popel and Bojar2018] to report the BLEU scores of FP32 models and integer models. Scores from t2t-bleu are the same as those from sacrebleu [Post2018]. We used a beam size of 4 in beam search and length penalty 0.6, and recorded both cased and uncased scores. Table 1 shows BLEU scores for both FP32 models and INT8 models. Unlike the BLEU scores in Table 2 in [Vaswani et al.2017], we did not apply checkpoint averaging to obtain Table 1. Still, we obtained the same BLEU score for Transformer Base (27.3) and a higher BLEU score for Transformer Big (29.2 as opposed to 28.4).

To go beyond the newstest2014 dataset, we reported FP32 and INT8 BLEU scores in Table 2 using the same models from Table 1. We observed that 10 of the 24 BLEU scores from the INT8 models in Tables 1 and 2 are either the same or higher than those from the FP32 models.

We presented a stable integer quantization approach for Transformer machine-translation models that converts an existing FP32 model to an integer model by alternately optimizing parameter tensors and non-parameter tensors in separate epochs. Unlike the case in previous work, we applied this approach to all 133 matrix multiplications in both Transformer Base and Transformer Big. For the English-to-German translation task on the newstest2014 test set, our INT8 models achieved 99.3% to 100% BLEU scores relative to FP32 models. To show the robustness of this approach, we extended it to INT6, although perhaps only FPGAs can take advantage of this non-standard format. In addition, we presented BLEU scores from newstest2015 to newstest2019 for the INT8 models to illustrate the usefulness of these models. It is encouraging that 10 out of the 24 BLEU scores from our INT8 models are at least as high as the scores from the FP32 models. Since our quantization approach starts with an FP32 model, we hypothesize that a principled method in selecting local minima (roughly training checkpoints) in the FP32 optimization landscape may yield even better results [He et al.2019], which is a topic for future research.