Recently, the study on learned iterative shrinkage thresholding algorithm (LISTA) has attracted increasing attentions. A large number of experiments as well as some theories have proved the high efficiency of LISTA for solving sparse coding problems. However, existing LISTA methods are all serial connection. To address this issue, we propose a novel extragradient based LISTA (ELISTA), which has a residual structure and theoretical guarantees. In particular, our algorithm can also provide the interpretability for Res-Net to a certain extent. From a theoretical perspective, we prove that our method attains linear convergence. In practice, extensive empirical results verify the advantages of our method. 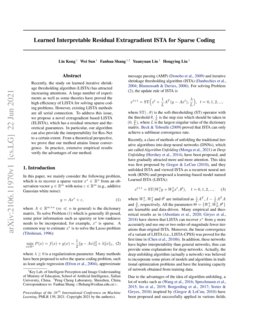 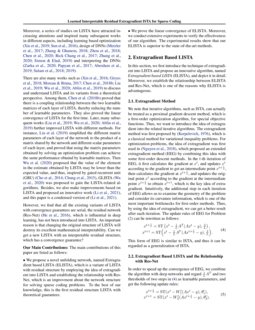 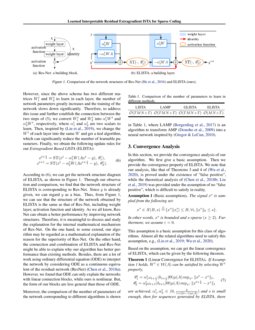 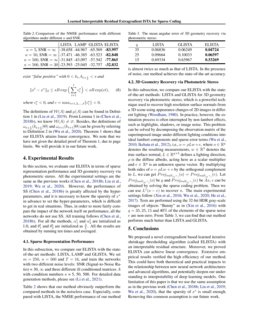 In this paper, we mainly consider the following problem, which is to recover a sparse vector

where A∈Rm×n (m≪n in general) is the dictionary matrix. To solve Problem (1) which is generally ill-posed, some prior information such as sparsity or low-rankness needs to be incorporated, for example, x∗

is sparse. A common way to estimate

where λ≥0 is a regularization parameter. Many methods have been proposed to solve the sparse coding problem, such as least angle regression (Efron et al., 2004), approximate message passing (AMP) (Donoho et al., 2009) and iterative shrinkage thresholding algorithm (ISTA) (Daubechies et al., 2004; Blumensath and Davies, 2008). For solving Problem (2), the update rule of ISTA is

where ST(⋅,θ) is the soft-thresholding (ST) operator with the threshold θ, 1L is the step size which should be taken in (0,2L), where L

is the largest singular value of the dictionary matrix.

Beck and Teboulle (2009) proved that ISTA can only achieve a sublinear convergence rate.

Recently, a class of methods of unfolding the traditional iterative algorithms into deep neural networks (DNNs), which are called

Algorithm Unfolding (Monga et al., 2021) or Deep Unfolding (Hershey et al., 2014), have been proposed, and have gradually attracted more and more attention. This idea was first proposed by Gregor and LeCun (2010)

, and they unfolded ISTA and viewed ISTA as a recurrent neural network (RNN) and proposed a learning-based model named Learned ISTA (LISTA):

where Wt1, Wt2 and θt are initialized as 1LAT, I−1LATA and λL, respectively. All the parameters Θ={Wt1,Wt2,θt} are learnable and data-driven. Many empirical and theoretical results as in (Aberdam et al., 2020; Giryes et al., 2018) have shown that LISTA can recover x∗ from y more accurately and use one or two order-of-magnitude fewer iterations than original ISTA. Moreover, the linear convergence of a variant of LISTA (i.e., LISTA-CPSS) was proved for the first time in (Chen et al., 2018b). In addition, these networks have higher interpretability than general networks, thus can provide some explanations for deep networks. Actually, the deep unfolding algorithm (actually a network) was believed to incorporate some priors of models and algorithms in traditional optimization problems and have the learning capacity of network obtained from training data.

proposed that the value of the element in the estimate obtained by LISTA may be lower than the expected value, and thus, inspired by gated recurrent unit (GRU)

However, we find that all the existing variants of LISTA with convergence guarantees are serial, the residual network (Res-Net) (He et al., 2016)

, which is influential in deep learning, has not been introduced into LISTA. An important reason is that changing the original structure of LISTA will destroy its excellent mathematical interpretability. Can we get a new LISTA with an interpretable residual structure, which has a convergence guarantee?

Our Main Contributions: The main contributions of this paper are listed as follows:

∙ We propose a novel unfolding network, named Extragradient based LISTA (ELISTA), which is a variant of LISTA with residual structure by employing the idea of extragradient into LISTA and establishing the relationship with Res-Net, which is an improvment about the network structure for solving sparse coding problems. To the best of our knowledge, this is the first residual structure LISTA with theoretical guarantees.

∙ We prove the linear convergence of ELISTA. Moreover, we conduct extensive experiments to verify the effectiveness of our algorithm. The experimental results show that our ELISTA is superior to the state-of-the-art methods.

In this section, we first introduce the technique of extragradient into LISTA and propose an innovative algorithm, named Extragradient based LISTA (ELISTA), and depict it in detail. Moreover, we establish the relationship between ELISTA and Res-Net, which is one of the reasons why ELISTA is advantageous.

We note that iterative algorithms, such as ISTA, can actually be treated as a proximal gradient descent method, which is a first-order optimization algorithm, for special objective functions. Thus, we want to introduce the idea of extragradient into the related iterative algorithms. The extragradient method was first proposed by (Korpelevich, 1976), which is a classical method for variational inequality problems. For optimization problems, the idea of extragradient was first used in (Nguyen et al., 2018), which proposed an extended extragradient method (EEG) by combining this idea with some first-order descent methods. In the t-th iteration of EEG, it first calculates the gradient at xt, and updates xt according to the gradient to get an intermediate point xt+12, then calculates the gradient at xt+12, and updates the original point xt according to the gradient at the intermediate point xt+12 to obtain xt+1, which is the key idea of extragradient. Intuitively, the additional step in each iteration of EEG allows us to examine the geometry of the problem and consider its curvature information, which is one of the most important bottlenecks for first-order methods. Thus, by using the idea of extragradient, we can get a better result after each iteration. The update rules of EEG for Problem (2) can be rewritten as follows:

This form of EEG is similar to ISTA, and thus it can be regarded as a generalization of ISTA.

In order to speed up the convergence of EEG, we combine the algorithm with deep networks and regard 1LAT and two thresholds of two steps in (4) as learnable parameters, and get the following update rules:

However, since the above scheme has two different matrices Wt1 and Wt2 to learn in each layer, the number of network parameters greatly increases and the training of the network slows down significantly. Therefore, to address this issue and further establish the connection between the two steps of (5), we convert Wt1 and Wt2 into αt1Wt and αt2Wt, respectively, where αt1 and αt2 are two scalars to learn. Then, inspired by (Liu et al., 2019), we change the Wt of each layer into the same W and get a tied algorithm, which can significantly reduce the number of learnable parameters. Finally, we obtain the following update rules for our Extragradient Based LISTA (ELISTA):

, we can see that the structure of the network obtained by ELISTA is the same as that of Res-Net, including weight layer, activation function and identity. As we all know, Res-Net can obtain a better performance by improving network structures. Therefore, it is meaningful to discuss and study the explanation for the internal mathematical mechanism of Res-Net. On the one hand, to some extend, our algorithm may be regarded as a mathematical explanation of the reason for the superiority of Res-Net. On the other hand, the connection and combination of ELISTA and Res-Net might be able to explain why our algorithm has better performance than existing methods. Besides, there are a lot of work using ordinary differential equation (ODE) to interpret the network by considering ODE as a continuous equivalent of the residual network (ResNet)

(Chen et al., 2018a). However, we found that ODE can only explain the networks with linear connection blocks, while ours is nonlinear. But, the form of our blocks are less general than those of ODE.

Moreover, the comparison of the number of parameters of the network corresponding to different algorithms is shown in Table 1, where LAMP (Borgerding et al., 2017) is an algorithm to transform AMP (Donoho et al., 2009) into a neural network inspired by (Gregor and LeCun, 2010).

In this section, we provide the convergence analysis of our algorithm. We first give a basic assumption. Then we provide the convergence property of ELISTA. We note that our analysis, like that of Theorems 3 and 4 of (Wu et al., 2020), is proved under the existence of “false positive”, while the theoretical analysis of (Chen et al., 2018b; Liu et al., 2019) was provided under the assumption of no “false positive”, which is difficult to satisfy in reality.

The signal x∗ is sampled from the following set:

In other words, x∗ is bounded and s-sparse (s≥2). Furthermore, we assume ε=0.

Based on the assumption, we can get the linear convergence of ELISTA, which can be given by the following theorem.

If Assumption 1 holds, Wt∈W(A) can be satisfied by selecting Wt properly,

In this section, we evaluate our ELISTA in terms of sparse representation performance and 3D geometry recovery via photometric stereo. All the experimental settings are the same as the previous works (Chen et al., 2018b; Liu et al., 2019; Wu et al., 2020). However, the performance of SS (Chen et al., 2018b) is greatly affected by the hyper-parameters, and it is necessary to know the sparsity of x∗ in advance to set the hyper-parameters, which is difficult to get in real situations. Thus, in order to more fairly compare the impact of the network itself on performance, all the networks do not use SS. All training follows (Chen et al., 2018b). For all the methods, αt1 and αt2 are initialized as 1.0, and θt1 and θt2 are initialized as λL. All the results are obtained by running ten times and averaged.

Table 2 shows that our method obviously outperform the compared methods in the noiseless case. Especially, compared with LISTA, the NMSE performance of our method is almost twice as much as that of LISTA. In the presence of noise, our method achieves the state-of-the-art accuracy.

In this subsection, we compare our ELISTA with the state-of-the-art methods: LISTA and GLISTA for 3D geometry recovery via photometric stereo, which is a powerful technique used to recover high resolution surface normals from a 3D scene using appearance changes of 2D images in different lighting (Woodham, 1980). In practice, however, the estimation process is often interrupted by non-lambert effects, such as highlights, shadows, or image noise. This problem can be solved by decomposing the observation matrix of the superimposed image under different lighting conditions into ideal lambert components and sparse error terms (Wu et al., 2010; Ikehata et al., 2012), i.e., o=ρLw+e, where o∈Rq denotes the resulting measurements, w∈R3 denotes the true surface normal, L∈Rq×3 defines a lighting direction, ρ is the diffuse albedo, acting here as a scalar multiplier and e∈Rq is an unknown sparse vector. By multiplying both sides of o=ρLw+e by the orthogonal complement to L, we can get Projnull[L⊤](o)=Projnull[L⊤](e). Let Projnull[L⊤](o) be y and Projnull[L⊤](e) be Ax, e can be obtained by solving the sparse coding problem. Then we can use L†(o−e) to recover n. The main experimental settings follow (Xin et al., 2016; Wu et al., 2020; He et al., 2017). Tests are performed using the 32-bit HDR gray-scale images of objects “Bunny” as in (Xin et al., 2016) with q=35,25,15 and 40% of the elements of the sparse noise e are non-zero. From Table 3, we can find that our method performs much better than LISTA and GLISTA.

We proposed a novel extragradient based learned iterative shrinkage thresholding algorithm (called ELISTA) with an interpretable residual structure. Moreover, we proved ELISTA can achieve linear convergence. Extensive empirical results verified the high efficiency of our method. This could have both theoretical and practical impacts to the relationship between new neural network architectures and advanced algorithms, and potentially deepen our understanding to interpretability of deep learning models. One limitation of this paper is that we use the same assumption as in the previous work (Chen et al., 2018b; Liu et al., 2019; Wu et al., 2020), that the sparsity of x∗ is small enough. Removing this common assumption is our future work.