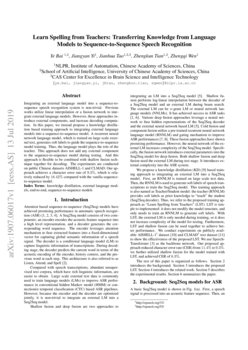 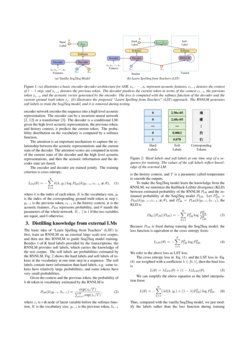 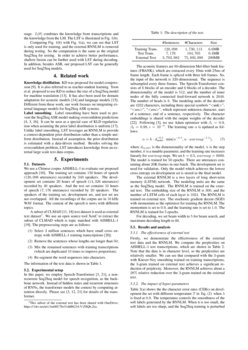 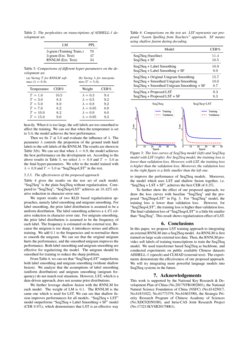 . A Seq2Seq model consists of two components: an encoder encodes the acoustic feature sequence into a high level representation, and a decoder generates the corresponding word sequence. The encoder leverages attention mechanism to fuse extracted features into a fixed-dimensional vector for capturing global semantic information of a speech signal. The decoder is a conditional language model (LM) to capture linguistic information of transcriptions. During decoding stage, the decoder predicts the current word in terms of the acoustic encoding of the encoder, history context, and the previous word at each step. This architecture is also referred to as Listen, Attend, and Spell

Compared with speech transcriptions, abundant unsupervised text corpora, which have rich linguistic information, are easier to obtain. Large scale external text data is commonly used to train language models (LMs) to improve ASR performance in conventional hidden Markov model (HMM) or connectionist temporal classification (CTC) based ASR pipelines. However, because the encoder and the decoder are optimized jointly, it is non-trivial to integrate an external LM into a Seq2Seq model.

. Various deep fusion approaches leverage a neural network to fuse hidden representations of the Seq2Seq decoder and the external neural network based LM

We propose a knowledge distillation (KD) [9] based training approach to integrating an external LM into a Seq2Seq model. First, an RNNLM is trained on large scale text data. Then, the RNNLM is used to generate soft labels of speech transcriptions to train the Seq2Seq model. This training approach is also named as Teacher/Student model: the teacher (RNNLM) provides soft labels as prior knowledge to “teach” the student (Seq2Seq decoder). Thus, we refer to the proposed training approach as “Learn Spelling from Teachers” (LST). LST is simple to implemented: it does not modify the model structure, and only needs to train an RNNLM to generate soft labels. With LST, the external LM is only needed during training, so it does not increase complexity of the model for testing. Furthermore, LST and shallow fusion can be used together to achieve better performance. We conduct experiments on publicly available AISHELL-1111http://openslr.org/33/ dataset [10] and CLMAD222http://openslr.org/55/ text dataset [11] to show the effectiveness of the proposed LST. We use Speech-Transformer [3] as the backbone network. Our proposed approach reduced character error rate (CER) from 11.4% to 9.3%. we further utilized shallow fusion for the model trained with LST, and achieved CER of 8.3%.

A basic Seq2Seq model is shown in Fig. (a). First, a speech signal is processed into an acoustic feature sequence. Then, an encoder network encodes the sequence into a high level acoustic representation. The encoder can be a recurrent neural network [2, 12] or a transformer [3]

. The decoder is a conditional LM: given the high level acoustic representation, the previous token, and history context, it predicts the current token. The probability distribution on the vocabulary is computed by a softmax function.

The encoder and decoder are trained jointly. The training criterion is cross entropy:

where k is the index of each token, K is the vocabulary size, yt is the index of the corresponding ground truth token at step t, yt−1 is the previous token, ct−1 is the history context, x is the acoustic features, PS2S represents probability, and θ stands the parameters of the whole network. δ(⋅,⋅) is 1 if the two variables are equal, and 0 otherwise.

The basic idea of “Learn Spelling from Teachers” (LST) is: first, train an RNNLM on an external large scale text corpus, and then use this RNNLM to guide Seq2Seq model training. Besides 1

-of-K hard labels provided by the transcriptions, the RNNLM provides soft labels, which carries the knowledge of the text corpus. The soft labels are probabilities estimated by the RNNLM.

Given the context and the previous token, the probability of k-th token in vocabulary estimated by the RNNLM is

where zi is i-th node of latent variable before the softmax function, K is the vocabulary size, yt−1 is the previous token, ht−1 is the history context, and T is a parameter called temperature to smooth the outputs.

To make the Seq2Seq model learn the knowledge from the RNNLM, we minimize the Kullback-Leibler divergence (KLD) between estimated probability of the RNNLM

is fixed during training the Seq2Seq model, the loss function is equivalent to the cross entropy form:

We refer to the above loss as LST loss.

We can simplify the above equation as the label interpolation form:

Comparing Fig. (b) with Fig. (a), we can see that LST is only used for training, and the external RNNLM is removed during testing. So the computation is the same as the original Seq2Seq for testing. In order to achieve better performance, shallow fusion can be further used with LST during decoding. In addition, besides ASR, our proposed LST can be generally used for Seq2Seq models.

Knowledge distillation. KD was proposed for model compression [9]. It is also referred to as teacher-student learning. Yoon et al. proposed to use KD to reduce the size of a Seq2Seq model for machine translation [13]. It has also been used for domain adaptation for acoustic models [14] and language models [15]. Different from these work, our work focuses on integrating external language models for Seq2Seq ASR systems. Label smoothing. Label smoothing have been used to prevent the Seq2Seq ASR model making overconfident predictions [4, 3, 16]. It can be seen as a special case of KLD regularization when assuming the prior label distribution is uniform [17]

. Unlike label smoothing, LST leverages an RNNLM to provide a context-dependent prior distribution rather than a simple uniform distribution. Instead of assumption, the prior distribution is estimated with a data-driven method. Besides solving the overconfident problem, LST introduces knowledge from an external large scale text data corpus.

The information of the text data is shown in Table 1.

In this paper, we employ Speech-Transformer [3, 21], a non-recurrent Seq2Seq model for speech recognition, as the backbone network. Instead of hidden states and recurrent structures of RNNs, the transformer models the context by computing attention directly. Please see [3, 12, 21] for details of the transformer.

The acoustic features are 80-dimension Mel-filter bank features (FBANK), which are extracted every 10ms with 25ms of frame length. Each frame is spliced with three left frames. So, the input of the network is 320-dimensional. The sequence is subsampled every three frames. The Speech-Transformer consists of 6 blocks of an encoder and 6 blocks of a decoder. The dimensionality of the model is 512, and the number of inner nodes of the fully connected feed-forward network is 2048. The number of heads is 8. The modeling units of the decoder are 4232 characters, including three special symbols “<unk>”, “<sos>”, “<eos>”, which represent unknown character, start of a sentence, end of a sentence, respectively. The character embeddings is shared with the output weights of the decoder [22]. Following [3], we use Adam optimizer with β1=0.9, β2=0.98, ϵ=10−9. The learning rate α is updated as follows:

where dmodel is the dimensionality of the model, n is the step number, k is a tunable parameter, and the learning rate increases linearly for warmup steps. We set k=0.5, warmup=8000. The model is trained for 50epochs. There are utterances containing about 20K frames in one batch. The development set is used for validation. Only the model which achieves the lowest cross entropy on development set is stored as the final model.

The external RNNLM is a two layers of long short-term memory (LSTM) network. The modeling units are the same as the Seq2Seq model. The RNNLM is trained on the external text. The embedding size of the RNNLM is

For decoding, we set beam width to 5 for beam search, and maximum decoding length to 60.

5.3.1 The effectiveness of external text

Firstly, we demonstrate the effectiveness of the external text data and the RNNLM. We compute the perplexities on AISHELL-1 test transcriptions, which are shown in Table 2. Note that the data is in character level, so the perplexities are relatively smaller. We can see that compared with the 3-gram with Kneser-Ney smoothing trained on training transcriptions, the 3-gram trained on external text achieves a significant reduction of perplexity. Moreover, the RNNLM achieves about a 28% relative reduction over the 3-gram trained on the external text.

5.3.2 The impact of hyper-parameters

Then we fix T at 5.0 and evaluate the influence of λ. The parameter λ controls the proportion of the ground truth hard labels to the soft labels of the RNNLM. The results are shown in Table (b). We can see that when λ=0.9, the model achieves the best performance on the development set. According to the above results in Table 3, we select λ=0.9 and T=5.0 as the final hyper-parameters. We refer to the model trained with λ=0.9 and T=5.0 as “Seq2Seq+LST” in the rest.

5.3.3 The effectiveness of the proposed approach

Table 4 gives the results on the test set of each model. “Seq2Seq” is the plain Seq2Seq without regularization. Compared to “Seq2Seq”, “Seq2Seq+LST” achieves an 18.42% relative reduction in character error rate.

We further leverage shallow fusion with the RNNLM for each model. The weight of LM is 0.1. The RNNLM is the same one which is used for LST. We can see that shallow fusion improves performances for all models. “Seq2Seq + LST” model outperforms “Seq2Seq + Label Smoothing + SF” model (CER 9.9%), which demonstrates that LST is an effective way to improve the performance of Seq2Seq models. Moreover, the model which uses LST and shallow fusion together, i.e. “Seq2Seq + LST + SF”, achieves the best CER of 8.3%.

In this paper, we propose LST training approach to integrating an external RNNLM into a Seq2Seq model. An RNNLM is first trained on large scale external text data. Then, the RNNLM provides soft labels of training transcriptions to train the Seq2Seq model. We used transformer based Seq2Seq as backbone, and conducted experiments on public available Chinese datasets AISHELL-1 (speech) and CLMAD (external text). The experiments demonstrate the effectiveness of our proposed approach. We will try integrating more powerful language models into Seq2Seq systems in the future.