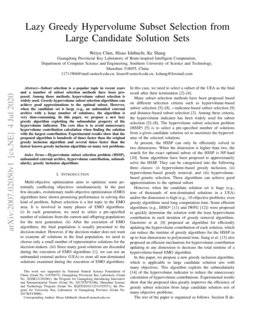 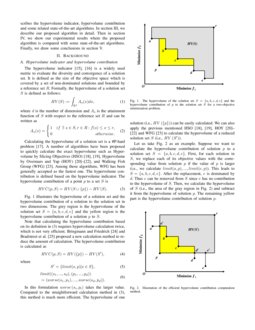 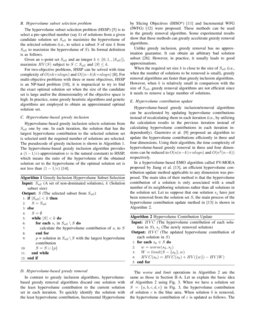 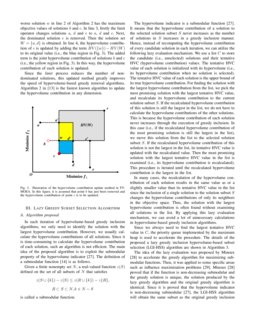 Multi-objective optimization aims to optimize some potentially conflicting objectives simultaneously. In the past few decades, evolutionary multi-objective optimization (EMO) algorithms have shown promising performance in solving this kind of problem. Subset selection is a hot topic in the EMO area. It is involved in many phases of EMO algorithms. (i) In each generation, we need to select a pre-specified number of solutions from the current and offspring populations for the next generation. (ii) After the execution of EMO algorithms, the final population is usually presented to the decision-maker. However, if the decision-maker does not want to examine all solutions in the final population, we need to choose only a small number of representative solutions for the decision-makers. (iii) Since many good solutions are discarded during the execution of EMO algorithms [21], we can use an unbounded external archive (UEA) to store all non-dominated solutions examined during the execution of EMO algorithms. In this case, we need to select a subset of the UEA as the final result after their termination [16, 28, 27].

In this paper, we propose a new greedy inclusion algorithm, which is applicable to large candidate solution sets with many objectives. This algorithm exploits the submodularity [23] of the hypervolume indicator to reduce the unnecessary calculation of hypervolume contributions. Experimental results show that the proposed idea greatly improves the efficiency of greedy subset selection from large candidate solution sets of many-objective problems.

The rest of the paper is organized as follows. Section II describes the hypervolume indicator, hypervolume contribution and some related state-of-the-art algorithms. In section III, we describe our proposed algorithm in detail. Then in section IV, we show our experimental results where the proposed algorithm is compared with some state-of-the-art algorithms. Finally, we draw some conclusions in section V.

In this formulation worse(si,pi) takes the larger value. Compared to the straightforward calculation method in (3), this method is much more efficient. The hypervolume of one solution (i.e., HV({p})) can be easily calculated. We can also apply the previous mentioned HSO [13, 14], HOY [24, 25, 2] and WFG [30] to calculate the hypervolume of a reduced solution set S′ (i.e., HV(S′)).

Unlike greedy inclusion, greedy removal has no approximation guarantee. It can obtain an arbitrary bad solution subset [8]. However, in practice, it usually leads to good approximations.

Since the limit process reduces the number of non-dominated solutions, this updated method greatly improves the speed of hypervolume-based greedy removal algorithms. Algorithm 2 in [17] is the fastest known algorithm to update the hypervolume contribution in any dimension.

Given a finite nonempty set N, a real-valued function z(S) defined on the set of all subsets of N that satisfies

is called a submodular function.

Since we always need to find the largest tentative HVC value in C, the priority queue implemented by the maximum heap is used to accelerate the procedure. The details of the proposed a lazy greedy inclusion hypervolume-based subset selection (LGI-HSS) algorithm are shown in Algorithm 3.

Let us explain the proposed algorithm using a simple example. Fig. 4 shows the changes of the hypervolume contribution in list C. The values in the parentheses are the stored HVC value of each solution to the selected subset. For illustration purposes, the solutions in the list are sorted by the stored HVC values. However, in the actual implementation of the algorithm, the sorting is not necessarily needed (especially when the number of candidate solutions is very large). This is because our algorithm only needs to find the most promising candidate solution with the largest HVC value in the list.

The proposed LGI-HSS algorithm is compared with the following two algorithms:

Since our main focus is the selection of a solution subset from an unbounded external archive (i.e., since the number of solutions to be selected is much smaller than the number of candidate solutions: k<<n in HSSP), greedy removal is not efficient. Hence, some algorithms only suitable for greedy removal (e.g., greedy removal using IHSO* [3] or IWFG [10] to identify the least contribution solution) are not compared in this paper.

All subset selection algorithms are coded by MatlabR2018a. The computation time of each run is measured on an Intel Core i5-7200U CPU with 4GB of RAM, running in Windows 10.

The results of the average computation time of each algorithm on the DTLZ2, DTLZ7 and I-DTLZ2 test problems are summarized in Figs. 5-7, respectively. Compared with the standard GI-HSS algorithm, we can see that our LGI-HSS algorithm can reduce the computation time by 91% to 99%. By the increase in the number of objectives (i.e., by the increase in the dimensionality of the objective space), the advantage of LGI-HSS over the other algorithms becomes larger. Among the three test problems in Figs. 5-7, all the three algorithms are fast on the I-DTLZ2 problem and slow on the DTLZ2 problem.

From Figs. 5-7, we can also observe that the average computation time of each algorithm did not severely increase when the number of objectives increases (i.e., when the dimensionality of the objective space increases) for DTLZ7 in Fig. 6 and I-DTLZ2 in Fig. 7. In some cases, the average computation time of LGI-HSS decreased when the number of objectives increases (e.g., on I-DTLZ2 by LGI-HSS in Fig. 7). This issue needs to be further addressed in our future study.

Our experimental results clearly showed that the idea of lazy evaluation based on the submodular property drastically decreased the computation time of hypervolume-based greedy subset selection. One interesting future research topic is to examine the applicability of this idea to other performance indicators. In this research direction, the relation between the submodularity and the Pareto compliance may need to be clearly explained. Another interesting research direction is to examine the relation between the efficiency of hypervolume-based subset selection algorithms and the properties of multi-objective optimization problems. It needs to be further explained why the increase in the number of objectives did not increase the computation time of some subset selection algorithms for some problems whereas it severely increased for other problems.