Layer-wise relevance propagation is a framework which allows to decompose the prediction of a deep neural network computed over a sample, e.g. an image, down to relevance scores for the single input dimensions of the sample such as subpixels of an image. While this approach can be applied directly to generalized linear mappings, product type non-linearities are not covered. This paper proposes an approach to extend layer-wise relevance propagation to neural networks with local renormalization layers, which is a very common product-type non-linearity in convolutional neural networks. We evaluate the proposed method for local renormalization layers on the CIFAR-10, Imagenet and MIT Places datasets. 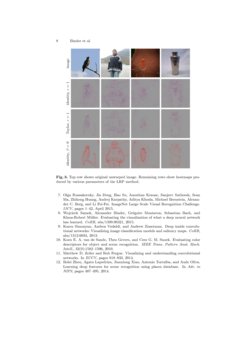 Artificial neural networks enjoy increasing popularity for image classification tasks. They have shown excellent performance in large scale competitions [5]. One reason is the ability to train neural networks with millions of training samples by parallelizing them on GPU hardware. This allows to use numbers of training samples which match the large number of parameters in deep neural networks. However, understanding what region of the image is important for a classification decision, is still an open question for neural networks, as well as for many other non-linear models. The work of [1] proposed Layer-wise Relevance Propagation (LRP) as a solution for explaining what pixels of an image are relevant for reaching a classification decision. This was done for neural networks, bag of word models [3, 10], and in a subsequent work [2]

. The presented approach is based on first (or higher) order Taylor expansion. We consider a classification setup with real-valued outputs. A classifier

f is a mapping of an input space f:X→R such that f(x)>0 denotes the presence of the class.

In the following we consider neural networks consisting of layers of neurons. The output

xj of a neuron j

is a non-linear activation function

g as given by

Pixels p with R(1)p<0 contain evidence against the presence of a class, while R(1)p>0 is considered as evidence for the presence of a class. These pixel-wise relevance scores can be visualized as an image called heatmap (see Fig. 1 for examples). Obviously, many possible such decompositions exist which satisfy equation 2. The work of [1] yield pixel-wise decompositions which are consistent with evaluation measures [8] and human intuition.

Assume that we know the relevance R(l+1)j of a neuron j at network layer l+1 for the classification decision f(x), then we like to decompose this relevance into messages R(l,l+1)i←j sent to those neurons i at the layer l which provide inputs to neuron j such that equation 3 holds.

Equations 3 and 4 define the propagation of relevance from layer l+1 to layer l. The relevance of the output neuron at layer M is R(M)1=f(x). The pixel-wise scores are the resulting relevances of the input neurons R(1)d.

The work in [1] established two formulas for computing the messages R(l,l+1)i←j. The first formula called ϵ-rule is given by

with zij=(wijxi)p and zj=∑k:wkj≠0zkj. The variable ϵ is a “stabilizer” term whose purpose is to avoid numerical degenerations when zj is close to zero, and which is chosen to be small. The second formula called β-rule is given by

where the positive and negative weighted activations are treated separately. The variable β controls how much inhibition is incorporated in the relevance redistribution. A fairly large value for β (e.g. β=1) leads to sharper heatmaps. In both formulas the message R(l,l+1)i←j has the following structure

We consider a general neuron j whose pooling and activation does not fit into the structure given by equation 1, and consequently, intuition for a possible redistribution formula is lacking. In this paper we propose a strategy for such neurons, based on the Taylor expansion of its activation function. A Taylor-based approach was used in [6]

for decomposing ReLU neurons by exploiting their local linearity. Here, we consider instead fully nonlinear neurons.

Suppose we can define for each neuron i input to neuron j a term vij which is derived from its activation xi such that ∑ivij=1. Then we can define a message R(l,l+1)i←j=vijR(l+1)j. Such messages were used in equations 5 and 6 where the weighting vij was chosen to depend on the weighted activations of neuron i: vij=c(wijxi)p and vij=c1z+ij+c2z−ij, respectively. For differentiable neurons, such weighting can be obtained by performing a first order Taylor expansion. Let xj=g(xh1,…,xhn) be a nonlinear activation function. Then, by Taylor expansion at some reference point (˜xh1,…,˜xhn), we get

Elements of the sum can be assigned to incoming neurons, and the zero-order term can be redistributed equally between them, leading to the decomposition

of the neuron activation onto its input neurons. Local renormalization layers have been shown to improve the performance in deep neural networks [5]. Consider the local renormalization yk of a neuron xk by the set of its surrounding neurons {x1,…,xn} as

This interaction can be modeled by a layer in the network that has an activation function as given in equation 10. Local renormalization layers represent a non-linearity which cannot be tackled exactly by LRP as introduced in [1], however the strategy proposed above can be applied.

One choice to be made is the point at which to perform the Taylor expansion. There are two apparent candidates, firstly the actual input to the renormalization layer z1=(x1,…,xn) and, secondly, the input corresponding to the case when only the neuron k fires which is to be normalized z2=(0,...…,0,xk,0,…,0). The partial derivative of y at z2 is zero for all variables xi with i≠k due to

This implies that the Taylor approximation has no off-diagonal contribution.

Therefore we apply the Taylor series around the point z1:

We need to define a measure for meaningfulness and quality of a pixel-wise decomposition in order to evaluate the various strategies to compute it. Here we use an idea from [8]: A pixel p is considered highly relevant for the classification score f(x) of the image x if modifying it by assigning it a random RGB value ~x(p), and classifying the modified image ¯xp=x∖{x(p)}∪{~x(p)} results in a strong decrease of the real-valued classification score f(¯xp). This idea can be extended by sequentially modifying pixels from the most relevant to the least relevant. The result is a graph of the prediction score f(¯x) as a function of the number of modified pixels. An example for some sequences which will be explained below is shown in Fig. 2. We can use these graphs to evaluate the meaningfulness of a pixel-wise decomposition.

In a second experiment we compare which treatment of the local renormalization layer is best to identify those pixels that are most relevant for classifying an image. The two tested approaches for treating the local renormalization are (1) like it would be the identity, (2) by first order Taylor expansion as given by equation 15. These approaches are furthermore tested when used in conjunction with the two methods proposed by [1], namely, the ϵ-rule in equation 5 with a fixed value of the numerical stabilizer ϵ, and the β-rule shown in equation 6, with fixed β.

We measure the quality of heatmaps by perturbing highest pixels first and computing the area under the curve (AUC). Lower AUC averaged over a large number of images indicates a better identification of pixel relevance by the heatmap. Results on CIFAR-10 are shown in Table 1. We observe that in all cases using first order Taylor in normalization layers improves the heatmap AUC score. This shows its effectiveness for dealing with non-linear neuron layers.

We perform the same experiments also with Imagenet [7] and MIT Places [12] datasets, each time evaluating results for 5000 images from their respective unlabeled test sets. Note that computing a heatmap requires only a predicted class label, not a ground truth. We evaluated results for the parameter settings β=0, β=1 in equation 6 and ϵ=0.01, ϵ=1, ϵ=100 in equation 5. Table 2 shows the difference of AUC between variants of LRP, when using either the identity or the Taylor expansion for local renormalization layers. We observe the following ordering starting with the lowest (best) AUC: ϵ=1, ϵ=0.01, ϵ=100, β=1, β=0. This order holds independent of whether we consider Imagenet or MIT places, when using Taylor for local renormalization layers. When using identity instead of Taylor, the order remain the same, except for ϵ=100 and ϵ=0.01 that are swapped. This is by itself an interesting result demonstrating that use of Taylor in the normalization layer does not disrupt the overall properties of relevance propagation techniques. For a comparison to other approaches such as heatmaps based on deconvolutions [11], or backpropagated gradients [9] we refer to [8].

Table 3 shows the difference of AUC between Taylor and identity for local renormalization layers, for various choices of datasets and LRP parameters. We observe that for the parameters with best AUC (ϵ=1 and ϵ=0.01), using Taylor expansion for representing local renormalization layers further improves the AUC scores. For the remaining choices the results are on par or slightly worse. This is consistent with the interpretation of large values of ϵ as smoothing out small contributions. It is also consistent with the observation that β=1 and β=0 yield both smooth heatmaps in general. Heatmaps for some parameters of interest are shown in Figure 3. Taylor with ϵ=1 has both high pixel selectivity and low noise, which in agreement with its measured superiority in the quantitative experiments.

We have presented an extension of layer-wise relevance propagation (LRP) based on first-order Taylor expansions for product-type nonlinearities. Such nonlinearities occur in the local renormalization layers of deep convolutional neural networks. The proposed extension is evaluated on three popular datasets and it is shown to clearly outperform the original LRP method. In future work we will investigate the potential gain of using higher order Taylor expansions, and apply the method to a larger class of neural network layers.