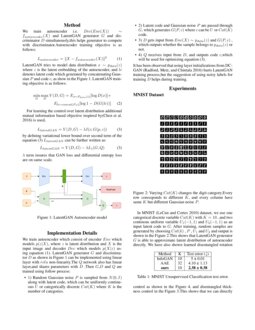 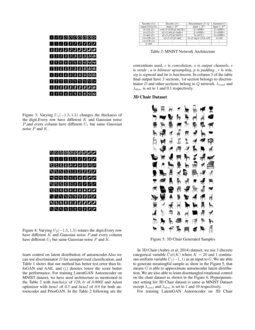 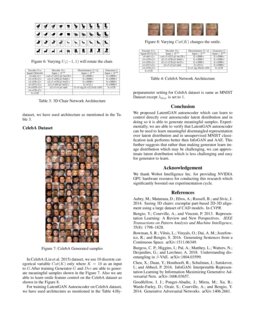 A Robust Classification-autoencoder to Defend Outliers and Adversaries

Toward A Neuro-inspired Creative Decoder

Geometric instability of out of distribution data across autoencoder architecture

We study the map learned by a family of autoencoders trained on MNIST, a...
Susama Agarwala, et al. ∙

Imagining the Unseen: Learning a Distribution over Incomplete Images with Dense Latent Trees

Images are composed as a hierarchy of object parts. We use this insight ...
Sebastian Kaltwang, et al. ∙

Generative models like GANGoodfellow et al. (2014) and VAEKingma and Welling (2014)

have shown remarkable progress in recent years.Generative adversarial networks have shown state-of-the-art performance in a variety of tasks like Image-To-Image translation

, and interpolating between sentences

In this work, we present a new way to learn control over autoencoder latent distribution with the help of AAE Makhzani et al. (2016) which approximates posterior of the latent distribution of autoencoder using any arbitrary prior distribution and using Chen et al. (2016) for learning disentangled representation. The previous work by Wang et al. (2019) had used a similar method of learning the latent prior using AAE along with a perceptual loss and Information maximization regularizer to train the decoder with the help of an extra discriminator.

In this work, we are trying to learn control over autoencoder and in doing so following are our contribution:

And in doing so we are also able to get 2.38 error rate on MNIST unsupervised classification which is far less then InfoGAN and Adversarial autoencoder.

LatentGAN tries to model data distribution x∼pdata(z) where z is the latent embedding of the autoencoder, and lc denotes latent code which generated by concatenating Gaussian P and code c, as show in the Figure 1. LatentGAN training objective is as follows:

by defining variational lower bound over second term of the equation (Method) LlatentGAN can be further written as:

We train autoencoder which consist of encoder Enc which models p(z|X), where z is latent distribution and X is the input image and decoder Dec which models p(X|z) using equation (Method). LatentGAN generator G and discriminator D as shown in Figure 1 can be implemented using linear layer with relu non-linearity.The Q network also has linear layer,and shares parameters with D .Then G,D and Q are trained using follow process:

It has been observed that using layer initializations from DCGAN Radford et al. (2016) hurts LatentGAN training process,but the suggestion of using noisy labels for training D helps during training.

In MNIST LeCun and Cortes (2010) dataset, we use one categorical discrete variable Cat(K) with K=10 , and two continous uniform variable U1(−1,1) and U2(−1,1) as an input latent code to G. After training, random samples are generated by choosing Cat(k) , P , U1 and U2 and output is shown in the Figure 2.This shows that LatentGAN generator G is able to approximate latent distribution of autoencoder directly.

We have also shown learned disentangled rotation control as shown in the Figure 4, and disentangled thickness control in the Figure 3.This shows that we can directly learn control on latent distribution of autoencoder.Also we can use discriminator D for unsupervised classification, and Table 1 shows that our method has better test error than InfoGAN and AAE, and (↓) denotes lower the score better the performance.

For training LatentGAN Autoencoder on MNIST dataset, we have used architecture as mentioned in the Table 2 with batchsize of 128, lr of 0.0002 and Adam optimizer with beta1 of 0.5 and beta2 of 0.9 for both autoencoder and PriorGAN. In the Table 2 following are the conventions used, c is convolution, o is output channels, s is stride , u is bilinear upsampling, p is padding , r is relu, sig is sigmoid and bn is batchnorm. In column 3 of the table final output have 3 sections, 1st section belongs to discriminator D and other sections belong to Q network. λcont and λdisc is set to 1 and 0.1 respectively.

dataset, we use 3 discrete categorical variable

Cat(K) where K=20 and 1 continuous uniform variable U1(−1,1) as an input to G. We are able to generate meaningful sample as show in the Figure 5, that means G is able to approximate autoencoder latent distribution. We are also able to learn disentangled rotational control on the chair dataset as shown in the Figure 6. Hyperparameter setting for 3D Chair dataset is same as MNIST Dataset except λcont and λdisc is set to 1 and 10 respectively.

For training LatentGAN Autoencoder on 3D Chair dataset, we have used architecture as mentioned in the Table 3.

In CelebA Liu et al. (2015) dataset, we use 10 discrete categorical variable Cat(K) only where K=10 as an input to G.After training Generator G and Dec are able to generate meaningful samples shown in the Figure 7.

Also we are able to learn smile feature control on the CelebA dataset as shown in the Figure 8.

For training LatentGAN Autoencoder on CelebA dataset, we have used architecture as mentioned in the Table 4.Hyperparameter setting for CelebA dataset is same as MNIST Dataset except λdisc is set to 1.