Memory replay may be key to learning in biological brains, which manage to learn new tasks continually without catastrophically interfering with previous knowledge. On the other hand, artificial neural networks suffer from catastrophic forgetting and tend to only perform well on tasks that they were recently trained on. In this work we explore the application of latent space based memory replay for classification using artificial neural networks. We are able to preserve good performance in previous tasks by storing only a small percentage of the original data in a compressed latent space version. 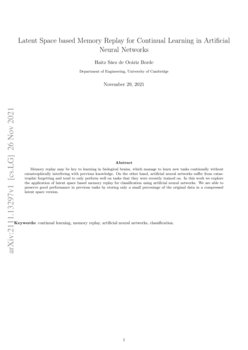 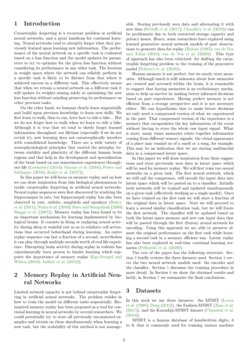 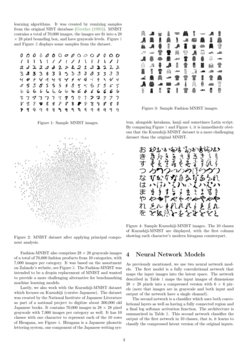 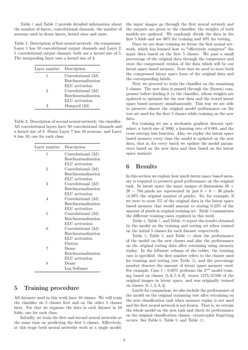 Replay is the reactivation of one or more neural patterns, which are sim...
Tyler L. Hayes, et al. ∙

Learning to act in an environment to maximise rewards is among the brain...
Emma L. Roscow, et al. ∙

Learning to Continually Learn Rapidly from Few and Noisy Data

Catastrophic forgetting is a recurrent problem in artificial neural networks, and a great handicap for continual learning. Neural networks tend to abruptly forget what they previously learned upon learning new information. The performance of the neural network on a specific task is evaluated based on a loss function and the model updates its parameters to try to optimize for the given loss function without considering its performance in any other task. The location in weight space where the network can reliably perform in a specific task is likely to be distinct from that where it achieved success in a different task. This effectively means that when we retrain a neural network on a different task it will update its weights aiming solely at optimizing the new loss function without minding preserving its performance on other previous tasks.

On the other hand, we humans clearly learn sequentially and build upon previous knowledge to learn new skills. We first learn to walk, then to run, later how to ride a bike… But we do not forget how to walk when we learn to ride a bike. Although it is true that we tend to slowly forget learned information throughout our lifetime (especially if we do not revisit it), new learning does not catastrophically interfere with consolidated knowledge. There are a wide variety of neurophysiological principles that control the interplay between stability and plasticity of the different human brain regions and that help in the development and specialization of the brain based on our sensorimotor experiences throughout life (lewk; Murray2016MultisensoryPA; power; zenke).

In this paper we will focus on memory replay and on how we can draw inspiration from this biological phenomenon to tackle catastrophic forgetting in artificial neural networks. Neural replay sequences were first discovered by studying the hippocampus in rats, but hippocampal replay has also been observed in cats, rabbits, songbirds and monkeys (buhry; nokia; Dave2000SongRD; skaggs). Memory replay has been found to be an important mechanism for learning implemented by biological brains. It consists in firing or replaying neural activity during sleep or wakeful rest so as to reinforce cell activations that occurred beforehand during learning. An entire replay sequence can last a fraction of a second, nevertheless it can play through multiple seconds worth of real life experience. Disrupting brain activity during replay in rodents has experimentally been proven to hinder learning which supports the importance of memory replay (EgoStengel2010DisruptionOR; jadhav).

Limited network capacity is not behind catastrophic forgetting in artificial neural networks. The problem resides in how to train the model on different tasks sequentially. Bio-inspired memory replay has been proposed as a tool for continual learning in neural networks by several researchers. We could potentially try to store all previously encountered examples and retrain on them simultaneously when learning a new task, but the scalability of this method is not manageable. Storing previously seen data and alternating it with new data (Rebuffi2017iCaRLIC; chaudhry2019tiny) can be problematic due to both restricted storage capacity and privacy issues. Hence, some researchers have explored using learned generative neural network models of past observations to generate data for replay (Robins1995CatastrophicFR; vandeVen2018GenerativeRW; vandeven2020). This type of approach has also been criticized: for shifting the catastrophic forgetting problem to the training of the generative model (schwarz2018progress).

Human memory is not perfect, but we surely store memories. Although much is still unknown about how memories are created and accessed within the brain, it is reasonable to suggest that having memories is an evolutionary mechanism to help us survive by making better informed decisions based on past experiences. Having perfect memory is not efficient from a storage perspective and it is not necessary either. We can hypothesize that to make future decisions we only need a compressed version of what we experienced in the past. That compressed version of the experience is a memory that encapsulates the key information of the event without having to store the whole raw input signal. What is more, many times memories relate together information coming from different sensory signals: the visual appearance of a place may remind us of a smell or a song, for example. This may be an indication that we are storing multimodal data in a compressed latent space.

In this paper we will draw inspiration from these suggestions and store previously seen data in latent space which will be used for memory replay. We will first train two neural networks on a given task. The first neural network, which we will call the compressor, will encode the input data into latent space which will be pasted on to a classifier. Initially both networks will be trained and updated simultaneously on a given task (effectively working as a single model). Once we have trained on the first task we will store a fraction of the original data in latent space. Next we will proceed to learn a second similar classification task, but we will freeze the first network. The classifier will be updated based on both the latent space memory and new raw input data that will be pasted through the first (frozen) neural network for encoding. Using this approach we are able to preserve almost the original performance on the first task while learning a second task in a memory efficient way. Latent replay has also been explored in real-time continual learning scenarios (

The rest of the paper has the following structure. Section 3 briefly reviews the three datasets used. Section 4 covers the two neural network models used: the encoder and the classifier. Section 5 discusses the training procedure in more detail. In Section 6 we show the obtained results and lastly, in Section 7 we summarize the final conclusions.

In this work we use three datasets: the MNIST (

MNIST is a famous database of handwritten digits, 0 to 9, that is commonly used for training various machine learning algorithms. It was created by remixing samples from the original NIST database (

Grother1995NISTSD). MNIST contains a total of 70,000 images, the images are fit into a 28 × 28 pixel bounding box, and have grayscale levels. Figure 1 and Figure 2 displays some samples from the dataset.

Fashion-MNIST also comprises 28 × 28 grayscale images of a total of 70,000 fashion products from 10 categories, with 7,000 images per category. It was based on the assortment on Zalando’s website, see Figure 3. The Fashion-MNIST was intended to be a dropin replacement of MNIST and wanted to provide a more challenging alternative for benchmarking machine learning models.

Lastly, we also work with the Kuzushiji-MNIST dataset which focuses on Kuzushiji (cursive Japanese). The dataset was created by the National Institute of Japanese Literature as part of a national project to digitize about 300,000 old Japanese books. It contains 70,000 images in 28 × 28 pixel grayscale with 7,000 images per category as well. It has 10 classes with one character to represent each of the 10 rows of Hiragana, see Figure 4. Hiragana is a Japanese phonetic lettering system, one component of the Japanese writing system, alongside katakana, kanji and sometimes Latin script. By comparing Figure 1 and Figure 4, it is immediately obvious that the Kuzushiji-MNIST dataset is a more challenging dataset than the original MNIST.

As previously mentioned, we use two neural network models. The first model is a fully convolutional network that maps the input images into the latent space. The network described in Table 1 maps the input images of dimensions 28 × 28 pixels into a compressed version with 6 × 6 pixels (note that images are in grayscale and both input and output of the network have a single channel).

The second network is a classifier which uses both convolutional layers as well as having a fully connected region and a final log softmax activation function. The architecture is summarized in Table

2. This second network classifies the output of the first network in 10 classes, that is, it learns to classify the compressed latent version of the original inputs.

provide detailed information about the number of layers, convolutional channels, the number of neurons used in dense layers, kernel sizes and more.

All datasets used in this work have 10 classes. We will train the classifier on 5 classes first and on the other 5 classes later. For that we organize the data in each dataset in 10 folds, one for each class.

Initially, we train the first and second neural networks at the same time on predicting the first 5 classes. Effectively, at this stage both neural networks work as a single model: the input images go through the first neural network and the outputs are given to the classifier; the weights of both models are updated. We randomly divide the data in the first 5 folds and use 90% for training and 10% for testing.

Once we are done training we freeze the first neural network, which has learned how to "effectively compress" the input data based on the first 5 classes. We pass a small percentage of the original data through the compressor and store the compressed version of the data which will be our latent space based memory. Note that we need to store both the compressed latent space form of the original data and the corresponding labels.

Next we proceed to train the classifier on the remaining 5 classes. The new data is passed through the (frozen) compressor before feeding it to the classifier, whose weights are updated to optimize for the new data and the stored latent space based memory simultaneously. This way we are able to preserve almost the original model performance on the test set used for the first 5 classes while training on the new data.

It has been experimentally found that memory replay may be a key element to continual learning in biological brains. The brain uses this technique to reinforce cell activation after learning a new task. In this work, we drew inspiration from these findings and applied latent space based memory replay to classification problems using the MNIST, Fashion-MNIST, and Kuzushiji-MNIST datasets. We found that using a small percentage of the original data and storing it in a compressed latent space form is sufficient for memory replay and to preserve a good performance on previous tasks.

We only explored this technique for similar tasks. In the future it would be interesting to apply this current of thought and similar latent space based memory replay approaches to more diverse problems which are not so similar between them. Efficient memory replay will probably require better encoding mechanisms. Nevertheless, we have shown that memory replay is indeed a good approach for tackling catastrophic forgetting and we have managed to do so storing only a very small percentage of the original data.