The forensic investigation of a terrorist attack poses a huge challenge to the investigative authorities, as several thousand hours of video footage need to be spotted. To assist law enforcement agencies (LEA) in identifying suspects and securing evidences, we present a platform which fuses information of surveillance cameras and video uploads from eyewitnesses. The platform integrates analytical modules for different input-modalities on a scalable architecture. Videos are analyzed according their acoustic and visual content. Specifically, Audio Event Detection is applied to index the content according to attack-specific acoustic concepts. Audio similarity search is utilized to identify similar video sequences recorded from different perspectives. Visual object detection and tracking are used to index the content according to relevant concepts. The heterogeneous results of the analytical modules are fused into a distributed index of visual and acoustic concepts to facilitate rapid start of investigations, following traits and investigating witness reports. 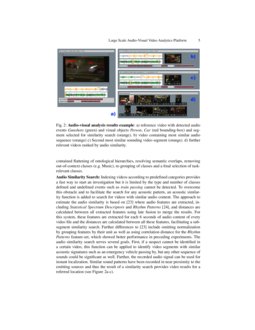 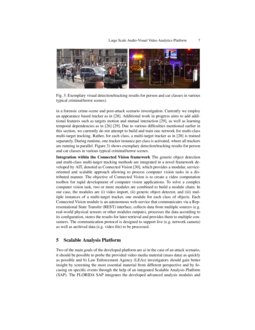 The presented platform is a result of the project Flexible, semi-automatic Analysis System for the Evaluation of Mass Video Data (FLORIDA) and is further developed in the project VICTORIA. The aim of these projects is to facilitate the the work of investigators after a terrorist attack. In such events investigating video data is a major resource to spot suspects and to follow hints by civilian witnesses. From past attacks it is known that confiscated and publicly provided video content can sum up to thousands of hours (e.g. more than 5.000 hours at the Boston marathon bombing attack). Being able to promptly analyze mass video data with regards to content is increasingly important for complex investigative procedures, especially for those dealing with crime scenes. Currently, this data is analyzed manually which requires hundreds or thousands of hours of investigative work. As a result, extraction of first clues from videos after an attack takes a long time. Additionally, law enforcement agencies (LEA) may not be able to process all the videos, leaving important evidence and clues unnoticed. This effort continues to increase when evidence videos of civilian witnesses are uploaded multiple times. The prompt analysis of video data, however, is fundamental – especially in the event of terrorist attacks – to prevent immediate, subsequent attacks. The goal of this platform is to provide legally compliant tools for LEAs that will increase their effectiveness in analyzing mass video data and speed up investigative work. These tools include modules for acoustic and visual analysis of the video content, where especially the audio analysis tools provide a fast entry point to an investigation because most terroristic attacks emit characteristic sound events. An investigator can start viewing videos at such events and then progress forward or backward to identify suspects and evidences.

The remainder of this work is structured as follows: Section 2 provides an overview of related work, Section 3 details the audio analysis, Section 4 the video analysis module and Section 5 the scalable platform. Section 6 summarizes the accompanying ethical research before we provide conclusions and an outlook to future work in Section 7.

Audio analysis is one of the key components of this platform. Due to the destructive intention of a terroristic act, this often emits one or more loud acoustic events which are captured from microphones disregarding the direction the sound originates from. Besides the higher perceptive field of acoustic information, many relevant events are non-visual or happen too fast to be captured by standard cameras (e.g. alarms, screams, gunshots). Thus, we apply audio analysis to index the video content according audible events and to provide an entry point for the investigations.

Two of the main goals of the developed platform are a) in the case of an attack scenario, it should be possible to probe the provided video media material (mass data) as quickly as possible and b) Law Enforcement Agency (LEAs) investigators should gain better insight by screening the most essential material from different perspective and by focusing on specific events through the help of an integrated Scalable Analysis Platform (SAP). The FLORIDA SAP integrates the developed advanced analysis modules and performs the tasks video data ingestions, data preparation and preprocessing, feature extraction and model fitting. These fitted analysis models are then applied to the preprocessed video content. This is implemented on an Apache Hadoop131313http://hadoop.apache.org/ platform. The analysis results are stored in an Apache HBASE141414https://hbase.apache.org/ database with an GraphQL151515https://graphql.org/ layer on top to provide dynamic access for the clients and the visualization of the calculated results. The hardware cluster consists of seven compute nodes and a name node which acts as the orchestrator of the Cloudera Hadoop platform. The underlying commodity hardware (HW) consists of Dell R320 rack servers, Xeon® CPU, E5-2430, 2.2 GHz with 6 cores / 12 threads each and about 63 GB of available RAM and a storage capacity of 11TB of disk space (HDD) per data node. Server administration, cluster configuration, update management as well as software distribution on the nodes is automated via Ansible 161616Ansible https://www.ansible.com/

. Tasks for rolling out the Zookeeper, Hive or HBASE configuration, distributing the /etc/hotsts files as well as installing the audio and video feature extraction tools and their software dependencies (such as Python scripts, Linux packages as ffmpeg and libraries as TensorFlow) are specified in the YAML syntax. ToMaR

[31] is a generic MapReduce wrapper for third-party command-line and Java applications that were not originally designed for the usage in an HDFS environment. It supports tools that read input based on local file pointers or stdin/stdout streams uses control-files to specify individual jobs. The wrapper integrates the applications in such a way that the required files for execution on the respectively integrated worker nodes (nodes 0..5) are locally copied into the Hadoop cache from HDFS and the application can thus be executed in parallel to the number of active nodes and the results are then written back to HDFS. The individual components (ToMaR jobs, shell scripts for import of JSON data into and generation of HBASE tables via HIVE, etc.) are combined into master workflows using Apache Oozie Workflow Scheduler for Hadoop 171717 http://oozie.apache.org/ and event triggers. (see Figure 4) This requires the setup of ZooKeeper for handling failover or orchestration of the components. In order to execute Hive and HBase in a distributed environment, Hadoop must be executed in Fully Distributed Mode and requires the setup a so-called metastore for state information on Hive and Oozie for Hadoop. ZooKeeper is set up in the SAP as ZooKeeper ensemble on node node2, node5, and the master name node.

The FLORIDA project is part of KIRAS, an Austrian research promotion program managed by the Austrian Research Promotion Agency (FFG), the national funding agency for industrial research and development in Austria. In KIRAS projects, an integrative approach is mandatory, which is based not only on technological solutions but also on a social science and humanities approach. For this reason, in FLORIDA accompanying ethical research are conducted.

The described platform integrates audio-visual analysis modules on a scalable platform and enables a fast start and rapid progress of investigations with the audio event detection module serving as a fast entry point. From these events, investigators can navigate through the video content, by either using the visual tracking modules on identified persons or objects, or use the audio similarity search to find related video content, increasing the chances for identification.

As part of future work we intend to focus on Audio Synchronization, because time information provided with video meta-data can not be considered accurate if the capturing equipment is not synchronized with a unified time-server. Personal cameras for example commonly reset their internal clock to a hard-coded time-stamp after complete battery drain. To align video content with unreliable time information, audio synchronization is applied. Audio features sensitive to peaking audio events are applied to extract patterns which are significant for a recorded acoustic scene. These patterns are then matched by minimizing the difference of their feature values over sliding windows. To find clusters of mutually synchronous videos, audio similarity retrieval is combined with audio synchronization. Finally, mutual offsets are calculated between the videos of a cluster which are used to schedule synchronous playback of the videos.

Acknowledgements This article has been made possible partly by received funding from the European Union’s Horizon 2020 research and innovation program in the context of the VICTORIA project under grant agreement no. SEC-740754 and the project FLORIDA, FFG Kooperative F&E Projekte 2015, project no. 854768.