In recent years, few-shot learning problems have received a lot of attention. While methods in most previous works were trained and tested on datasets in one single domain, cross-domain few-shot learning is a brand-new branch of few-shot learning problems, where models handle datasets in different domains between training and testing phases. In this paper, to solve the problem that the model is pre-trained (meta-trained) on a single dataset while fine-tuned on datasets in four different domains, including common objects, satellite images, and medical images, we propose a novel large margin fine-tuning method (LMM-PQS), which generates pseudo query images from support images and fine-tunes the feature extraction modules with a large margin mechanism inspired by methods in face recognition. According to the experiment results, LMM-PQS surpasses the baseline models by a significant margin and demonstrates that our approach is robust and can easily adapt pre-trained models to new domains with few data. 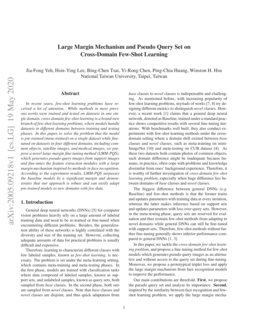 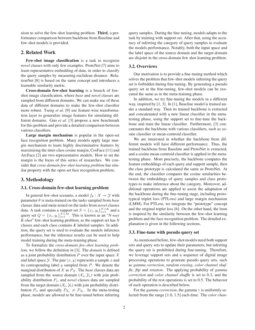 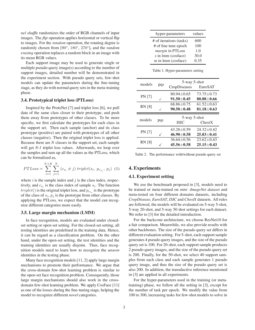 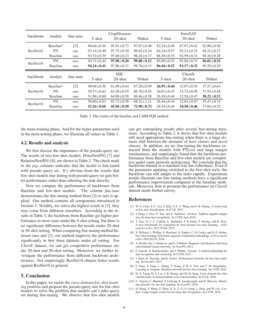 A New Benchmark for Evaluation of Cross-Domain Few-Shot Learning

for computer vision problems heavily rely on a large amount of labeled training data and need to be re-trained or fine-tuned when encountering different problems. Besides, the generalization ability of these networks is highly correlated with the diversity and size of the training set. However, collecting adequate amounts of data for practical problems is usually difficult and expensive.

Therefore, learning to characterize different classes with few labeled samples, known as few-shot learning, is necessary. The problem is set under the meta-learning setting, which contains meta-training and meta-testing phases. In the first phase, models are trained with classification tasks where data composed of labeled samples, known as support sets, and unlabeled samples, known as query sets, both sampled from base classes. In the second phase, both sets are sampled from novel classes. Note that base classes and novel classes are disjoint, and thus quick adaptation from base classes to novel classes is indispensable and challenging. As mentioned before, with increasing popularity of few-shot learning problems, myriads of works [7, 8] try designing different metrics to distinguish novel classes. However, a recent work [1] claims that a general deep neural network, denoted as Baseline, trained under a standard practice shows competitive results with several fine-tuning iterations. With benchmarks well built, they also conduct experiments with few-shot learning methods under the cross-domain setting where a domain shift existed between base classes and novel

classes, such as meta-training on mini-ImageNet

[10] and meta-testing on CUB dataset [4]. As these two datasets both contain photos of common objects, such domain difference might be inadequate because humans, in practice, often cope with problems and knowledge dissimilar from ones’ background experience. Therefore, it is worthy of further investigation of cross-domain few-shot learning problem, especially when huge difference lies between domains of base classes and novel classes.

In this paper, we tackle the cross-domain few-shot learning problem, and propose a fine-tuning method for few-shot models which generates pseudo query images as an alternative and without access to the query set during fine-tuning. Moreover, we propose a prototypical triplet loss and apply the large margin mechanism from face recognition models to improve the performance.

Few-shot image classification is a task to recognize novel classes with only few examples. ProtoNet [7]

aims to learn representative embedding of data, in order to classify the query samples by measuring euclidean distance. RelationNet

[8] is based on the same concept and introduces a learnable similarity metric.

Cross-domain few-shot learning is a branch of few-shot image classification, where base and novel classes are sampled from different domains. We can make use of these data of different domains to make the few-shot classifier more robust. Tseng et al. [9] use feature-wise transformation layer to generalize image features for simulating different domains. Guo et al. [3] propose a new benchmark for this problem and provide a detailed comparison between various classifiers.

Large margin mechanism is popular in the open-set face recognition problem. Many models apply large margin mechanism to learn highly discriminative features by maximizing the inter-class cosine margin, CosFace [11] and ArcFace [2] are two representative models. How to set the margin is the focus of this series of researches. We consider that cross-domain few-shot learning problem has similar property with the open-set face recognition problem.

In general few-shot scenario, a model fθ:X→Y with parameter θ is meta-trained on the tasks sampled from base classes data and meta-tested on the tasks from novel classes data. A task contains a support set S={xi,yi}N×Ki=1 and a query set Q={xi,yi}N×Mi=1. This is known as an ”N-way K-shot” few-shot learning problem, as the support set has N classes and each class contains K labeled samples. In addition, the query set is used to evaluate the models inference performance, but the inference results can be used to help model training during the meta-training phase.

To formalize the cross-domain few-shot learning problem, we follow the definition in [3]. The domain

is defined as a joint probability distribution

P over the input space X and label space Y. The pair (x,y) represents a sample x and its corresponding label y sampled from P. We denote the marginal distribution of X as PX. The base classes data are sampled from the source domain (Xs,Ys) with join probability distribution Ps, and novel classes data are sampled from the target domain (Xt,Yt) with join probability distribution Pt, and specially PXs≠PXt. In the meta-testing phase, models are allowed to be fine-tuned before inferring query samples. During the fine-tuning, models adapts to the task by training with support set. After that, using the accuracy of inferring the category of query samples to evaluate the models performance. Notably, both the input space and the label space of the source domain and the target domain are disjoint in the cross-domain few shot learning problem.

We are interested in whether the backbone from different models will have different performance. Thus, the trained backbone from Baseline and ProtoNet is extracted, and a cosine mean-centroid classifier is applied in the meta-testing phase. More precisely, the backbone computes the feature embeddings of each query and support sample, then the class prototype is calculated the same as ProtoNet. At the end, the classifier compares the cosine similarities between the embeddings of query samples and class prototypes to make inference about the category. Moreover, additional operations are applied to assist the adaptation of the backbone during the fine-tuning stage, including prototypical triplet loss (PTLoss) and large margin mechanism (LMM). For PTLoss, we integrate the “prototype” concept and the original triplet loss

[6]. On the other hand, the lmm is inspired by the similarity between the few-shot learning problem and the face recognition problem. The detailed explanation is given in the following sections.

As mentioned before, few-shot models need both support sets and query sets to update their parameters, but inferring the query set is prohibited during fine-tuning. Therefore, we leverage support sets and a sequence of digital image processing operations to generate pseudo query sets, such as gamma correction, random erasing, color channel shuffle, flip and rotation. The applying probability of gamma correction and color channel shuffle is set to 0.3, and the probability of the rest operations is set to 0.5. The behavior of each operation is described below.

For the gamma correction, the gamma γ is uniformly selected from the range [1.0, 1.5] each time. The color channel shuffle randomizes the order of RGB channels of input images. The flip operation applies horizontal or vertical flip to images. For the rotation operation, the rotating degree is randomly chosen from [90∘, 180∘, 270∘], and the random erasing operation replaces a random block in an image with its mean RGB values.

Each support image may be used to generate single or multiple pseudo query image(s) according to the number of support images, detailed number will be demonstrated in the experiment section. With pseudo query sets, few-shot models can update the parameters during the fine-tuning stage, as they do with normal query sets in the meta-training phase.

Inspired by the ProtoNet [7] and triplet loss [6], we pull data of the same class closer to their prototype, and push them away from prototypes of other classes. To be more specific, we first calculate the prototypes for each class in the support set. Then each sample (anchor) and its class prototype (positive) are paired with prototypes of all other classes (negative). Then the original triplet loss is applied. Because there are N classes in the support set, each sample will get N-1 triplet loss values. Afterwards, we loop over the samples and sum up all the values as the PTLoss, which can be formalized as,

Many face recognition models [11, 2] apply large margin mechanisms to promote their performance. We argue that the cross-domain few-shot learning problem is similar to the open-set face recognition problem. Consequently, those large margin mechanisms should also work in the cross-domain few-shot learning problem. We apply CosFace [11] as one of the losses during the fine-tuning stage, helping the model to recognize different novel categories.

We use the benchmark proposed in [3], models need to be trained or meta-trained on mini -ImageNet dataset and meta-tested on four different domains datasets, including CropDisease, EuroSAT, ISIC and ChestX datasets. All rules are followed, the models will be evaluated on 5-way 5-shot, 5-way 20-shot, and 5-way 50 shot settings for each dataset. We refer to [3] for the detailed introduction.

For the hyper-parameters used in the training (or meta-training) phase, we follow all the setting in [3], except for the number of task per epoch. We modify the value from 100 to 300, increasing tasks for few-shot models to solve in the meta-training phase. And for the hyper-parameters used in the meta-testing phase, we illustrate all values in Table 1.

Now we compare the performance of backbones from Baseline and few-shot models. The column fine-tune demonstrates the fine-tuning method from [3] or ours is applied. Our method contains all components introduced in Section 3. Notably, we select the highest result in [3], they may come from different classifiers. According to the results in Table 3, the backbone from Baseline get higher performance in most cases under the 5-shot setting, but there is no significant difference between the results under 20-shot or 50-shot setting. When comparing fine-tuning method between ours and [3], our method improves the performance significantly in first three datasets under all setting. For ChestX dataset, we can get competitive performance under 20-shot and 50-shot setting. Moreover, we further investigate the performance from different backbone architectures. Not surprisingly, ResNet18 obtains better results against ResNet10 in general.

In this paper, we tackle the cross-domain few-shot learning problem and propose the pseudo query sets for few-shot models to solve the problem that models can’t infer query set during fine-tuning. We observe that few-shot models can get outstanding results after several fine-tuning iterations. According to Table 2, it shows that few-shot models still need appropriate fine-tuning when there is a large domain shift between the domains of base classes and novel classes. In addition, we try fine-tuning the backbones extracted from the models with PTLoss and large margin mechanisms, and surprisingly found that the backbone performance from Baseline and few-shot models are competitive under same network architecture. We conclude that the backbone trained in a standard way has robustness. Even if the parameter updating switched to the few-shot style, the backbone can still adapts to the tasks rapidly. Experiment results illustrate our fine-tuning methods have a significant performance improvement compared to the baseline methods. Moreover, how to promote the performance on ChestX dataset needs further survey.